Frank M. Conaway Sr., paterfamilias of a Baltimore political clan, died today, a member of the family tweeted this afternoon. There has not yet been an official announcement of the death by the family.

UPDATE: His son, Frank M. Conaway Jr., has confirmed that his father was found unresponsive in bed this morning.

Conaway was 81, and his life in office stretched back to 1970 when he was elected to the House of Delegates.

He’s been clerk of the Baltimore Circuit Court since 1998, winning five consecutive terms, the last being last November.

He was not so successful in mayoral politics. He came in second-to-last in his bid to replace Mayor Stephanie Rawlings-Blake in the 2011 Democratic Party primary. 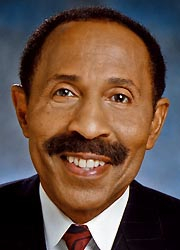 Last December, he made headlines by declaring that he would switch to the Republican Party in the wake of Larry Hogan’s victory in the Maryland governor’s race.

He said the local Democratic Party was no longer receptive to the needs or aspirations of the black population in the city.

Conaway was known for his snappy attire and uncanny knack at getting his family into elective office – and himself at the front of major political events.

His showmanship both delighted and frustrated two generations of constituents.

His children are Frank Conaway Jr., a state delegate from the 40th District, and Belinda Conaway, a former 7th District Councilwoman who staged a comeback by becoming Register of Wills last November. His widow, Mary, earlier had been elected Register of Wills.

The family frequently campaigned together. At election time, a forest of campaign posters, touting this and that Conaway for office, couldn’t be missed around Frank Sr.’s front yard on Liberty Heights Avenue.

Ray Conaway first tweeted this afternoon that his “awesome great uncle” had died.