The demonstrators protesting Freddie Gray’s death after being in police custody had said they’d be coming back to Baltimore’s Western District police station and the city was ready for them, meeting them yesterday with a new perimeter, made from jersey barriers and bike racks, that kept them further from the building.

The crowd, smaller than Tuesday’s but at times more intense, responded with fury.

“You killed that boy, you murdered him, you killed Freddie Gray, we know what you do!” one woman screamed, standing at the barrier and facing a line of police officers who stood silently and faced them.

Carron Morgan was one of several people who sought to calm the demonstrators and to engage the officers, focusing in particular on Lt. Charles Thompson and begging to talk to someone in authority and have them take down the barriers.

“Come on now, see: we’re not letting these people through! We want you police to be safe. We don’t want them to be hurt. We just want justice,” Morgan said.

“I’m his cousin!” he added, explaining to a reporter that he is a cousin of Freddie Gray, the 25-year-old whose death Sunday after an arrest partially caught on videotape has sparked days of protest and national media attention. 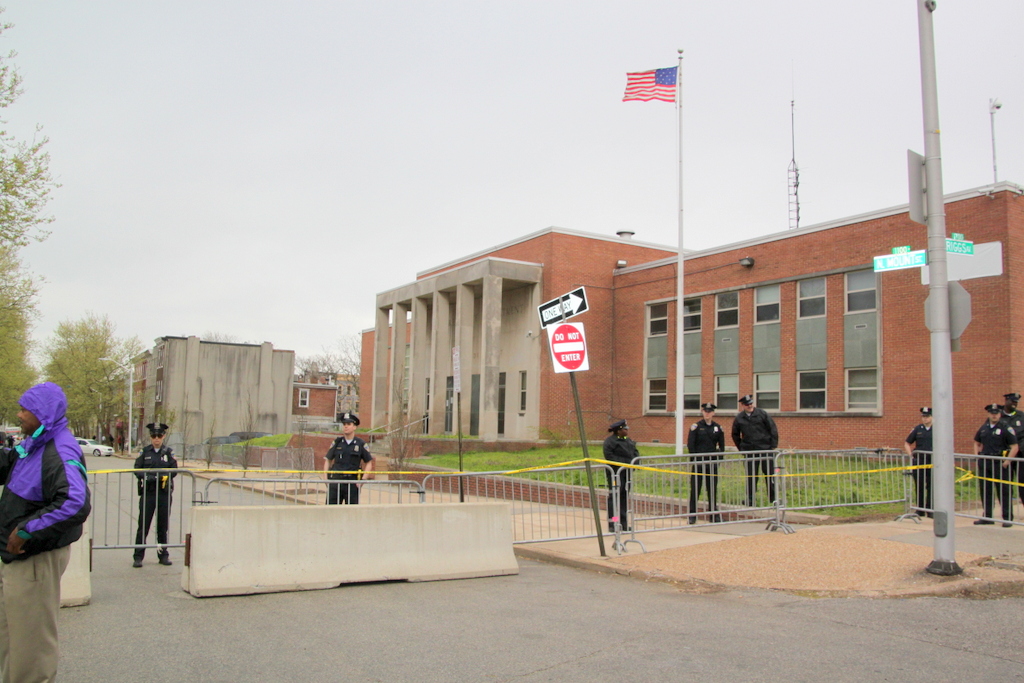 Bike racks and jersey barriers kept the public back from the Western District. (Photo by Fern Shen) 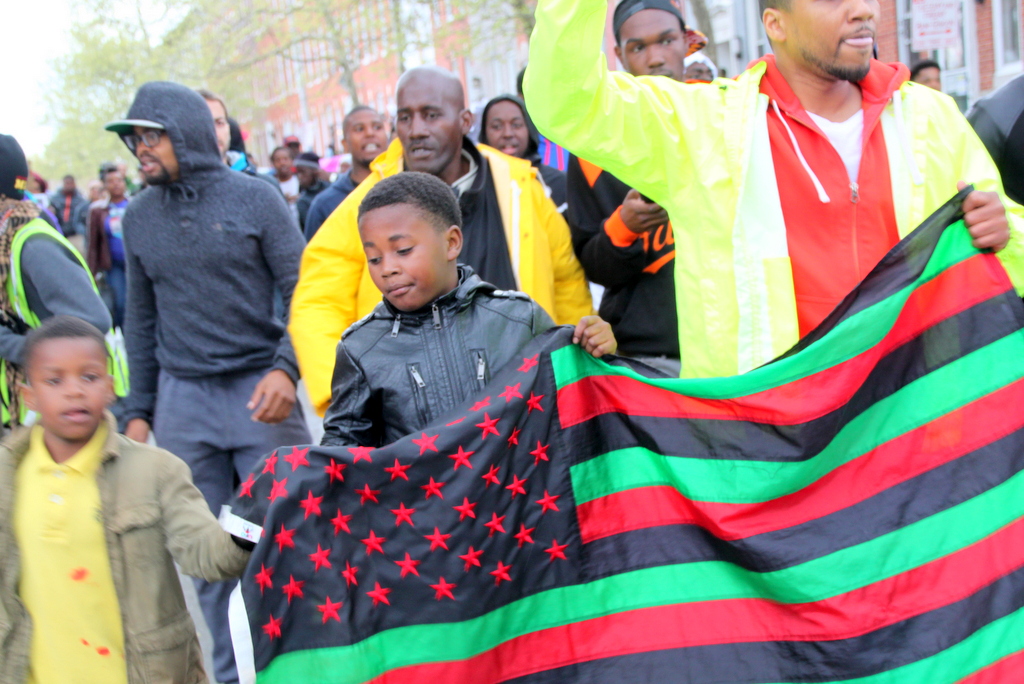 Protesters charged down Mount Street and pressed up against the barricades. (Photo by Fern Shen)

Pointing to the barrier and taking another tack,  an organizer from the group Baltimore Bloc said to Thompson, “It’s against the law.” (Bloc has been organizing around justice issues, including police violence, for the last three years.)

“Come on, we’re neighborhood leaders!” Morgan said to Thompson, who gave him a moment of encouragement. “You want talk to the colonel? Maybe if things calm down, I’ll see what I can do.”

But the protesters never got through, reacting with anger, more chanting and at one point throwing several objects at police, including a cup of coffee.

The group was mostly local, with many protesters coming from Gilmor Homes, where Gray was arrested on April 12. Police say they spotted Gray, made eye contact, chased him down and arrested him after finding a knife in his pocket.

A bystander’s video shows officers dragging him into a van screaming, his legs dragging. About 40 minutes later at the Western District, four blocks away, they called for paramedics. Gray lapsed into a coma and on April 19, he died. 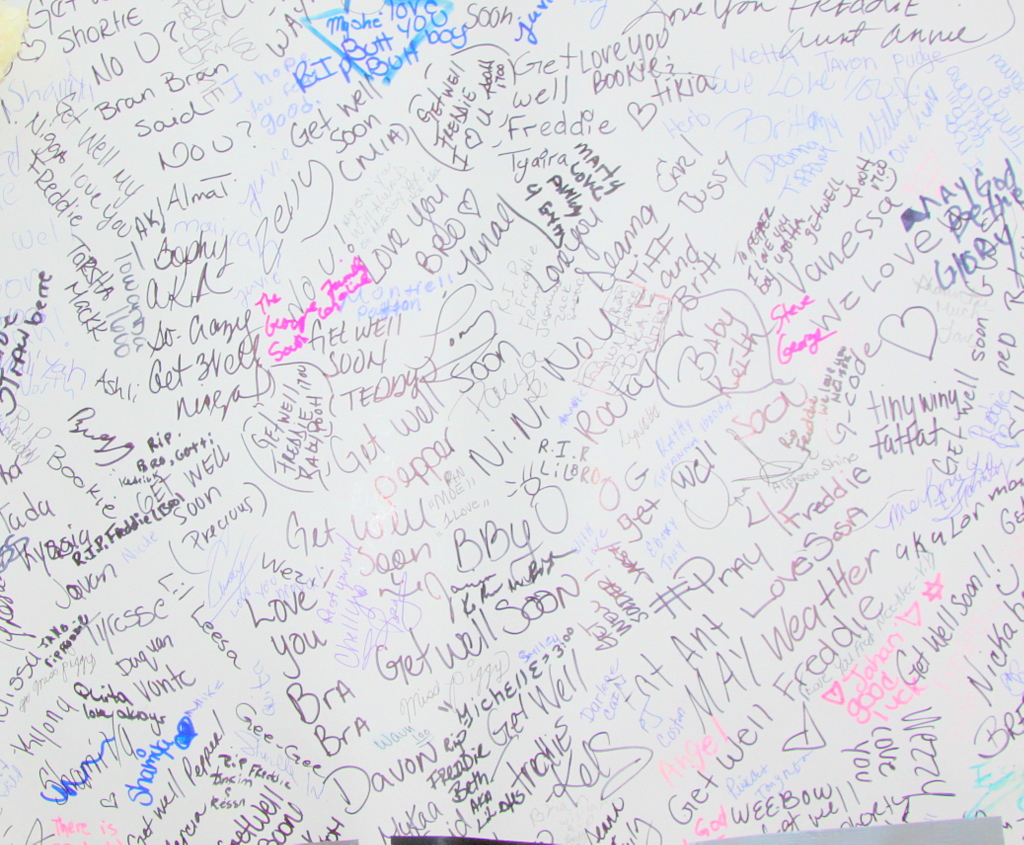 A get-well card for Freddie Gray, signed when he was hospitalized and in a coma, is still taped to the wall near where he was arrested. (Photo by Fern Shen)

Police acknowledge he had a severe spinal cord injury. The family says his voicebox was crushed and his neck was snapped.

Was it legal for police to chase Gray? Who caused his injuries and how? Why hasn’t the city released more details about the officers’ statements concerning the moments before and after the video? Will anyone be arrested?

(Six officers involved in the incident have been suspended with pay and are on administrative duties.)

Those were some of the questions demonstrators had yesterday at the Western District and later, after they marched downtown to police headquarters near City Hall.

With more protests planned today and Saturday, the rhetoric around the Gray case has amped up on all sides, with the police union president choosing terminology highly symbolic for black citizens.

“The images seen on television look and sound much like a lynch mob in that they are calling for the immediate imprisonment of these officers without them ever receiving the due process that is the Constitutional right of every citizen, including law enforcement officers,” Gene Ryan, Fraternal Order of Police Lodge 2 president, said in a statement.

Meanwhile, protesters are getting support from a number of outside groups, some of whom showed up at the Western District yesterday.

“We’re just here to help,” announced Malik Shabazz, president of Black Lawyers for Justice, who came with a contingent from The Nation of Islam and briefly addressed the crowd.

“When they kill our people, when our blood is running in the streets, we’re not going to let you be alone,” Shabazz said. “We want to give you a strong black hand for standing up for yourselves. We’re with you 100%.” 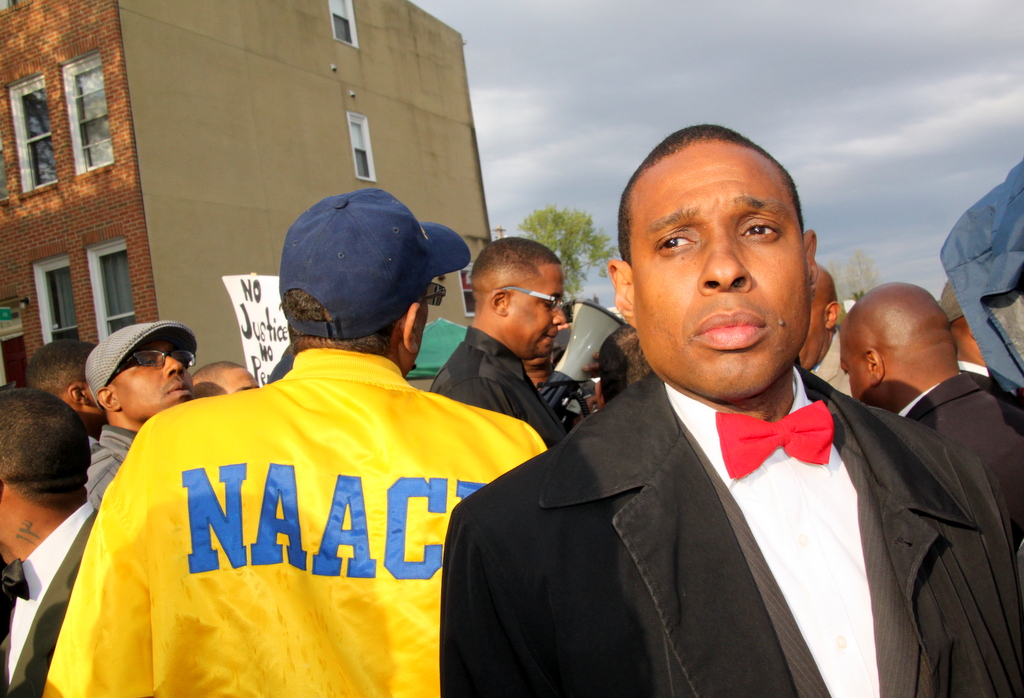 A number of groups joined demonstrators yesterday, including Malik Shabazz (with glasses, bullhorn) of Black Lawyers for Justice. (Photo by Fern Shen) 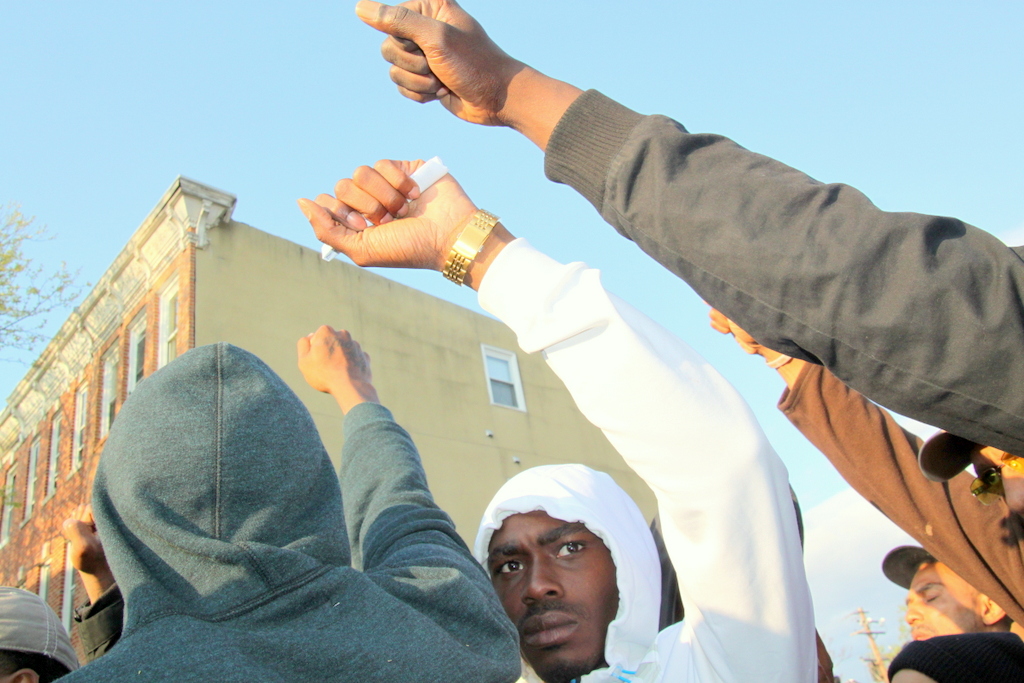 “What happened to Freddie Gray? They murdered him!” demonstrators chanted, at Wednesday’s protest. (Photo by Fern Shen)

Another group came, from area churches, and led the crowd in prayer.

Janet Frazier Smith, speaking to a reporter, preferred to offer up a story.

“The police get my son every week,” the 66-year-old Baltimore resident said, going on to explain:

“He’s 37, single, educated and he has a job,” but is continually being pulled over, Smith said.

It happened recently, he said, when he was on his way to his job at Ruth’s Chris Steakhouse. Police stopped him for not having his seat-belt on. Even though they discovered that it was buckled, they still searched his car.

Smith sees the “driving while black” stops and the incidents like what happened to Gray as part of the same phenomenon.

“You know what it is, it’s a backlash,” she said. “It’s this hostility between the police and black men.”

“No one will ever say it, but I think it’s partly because we have a black president.”

She saw a tee-shirt recently and says she wants to get one, too: “It says, ‘If you see a policeman, tell a brother.’” 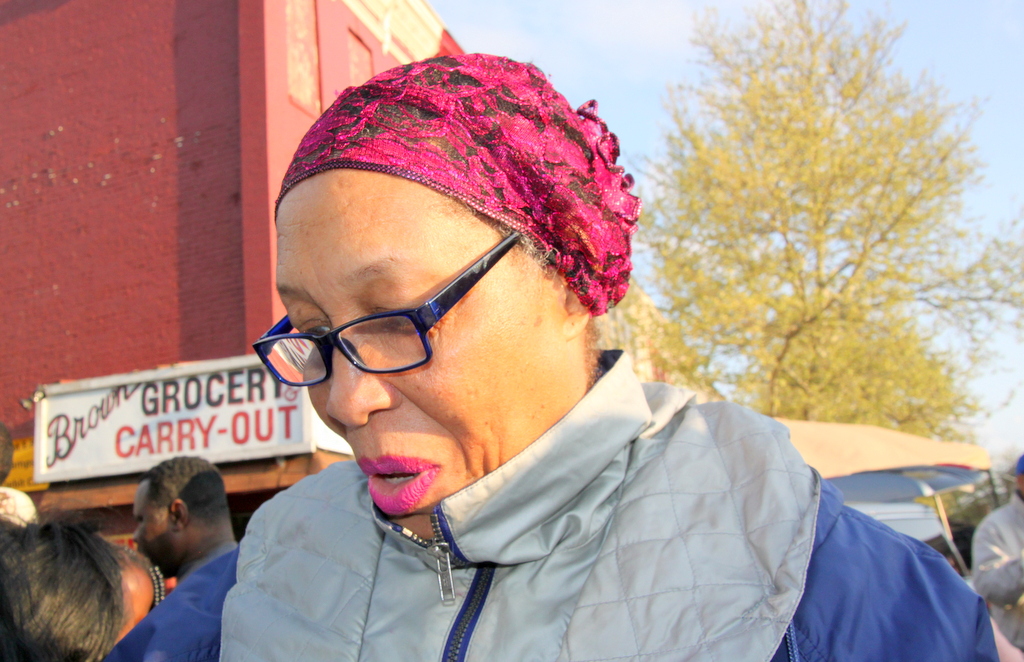 “The police get my son once a week,” said Janet Frazier West. (Photo by Fern Shen)