Beginning in 2005, I found housing for 32 people who were homeless and living in the park adjacent to St Vincent de Paul Church, a tiny square of land that sits empty now, on the corner of Fayette and President Streets.

Thanks to an experimental program called Housing First that provided some funds and housing vouchers – a city program – I was able to get them all into apartments, obtain furniture, and secure public benefits.

Today, Housing First is not honored in practice. The city is tearing down encampments with no permanent housing in place to offer the residents.

Housing First is a model to end homelessness based on the belief that safe, affordable housing reduces harm and promotes stability even for people who are actively using drugs or alcohol.

It worked then, and it could work now if our City leaders were faithful to their goals of reducing homelessness and committed to prioritizing the resources to do so. 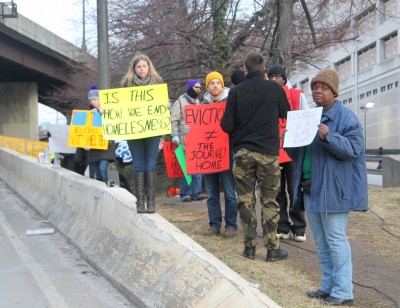 Protesters at the on-ramp to the Jones Falls Expressway north as city workers cleared the homeless encampment there. (Fern Shen)

Let me take you back ten years and introduce you to the people I met living there by the end of the Jones Falls Expressway, and tell you what happened after we put concern about their lifestyles and addictions to the side – and simply focused on housing them first.

Undone by Failure and Addiction

I first went to the park on a June morning. People were sleeping on benches, getting dressed, hanging clothing on lines. I sat on a picnic table in a corner of the park with my clipboard and my cup of coffee. I did this every day for weeks. Slowly, hesitantly, people began to speak with me.

Addiction to alcohol or drugs is only the first layer of someone’s suffering, and frequently all that most people see. But homelessness is complex and multi-faceted. Underneath those empty bottles and used syringes were broken lives. 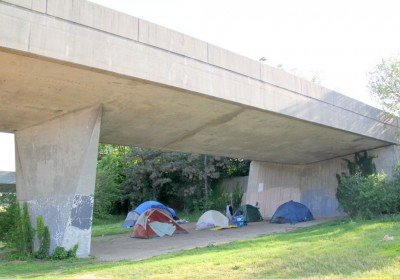 I heard stories of failed romances, lost opportunities, the deaths of parents, partners, or children. I heard tales of horrific child abuse, family violence, sexual and physical abuse so disturbing that I had to keep a constant supply of Kleenex in my car.

There was Thomas, who was grieving his failed marriage and the loss of his four children.

Perhaps they were not dead, but he had no idea where or how to locate them. They were lost to him – he didn’t even have the money to make a phone call. And what would he tell them if he did reach them?

The guilt and shame of this loss shattered Thomas. He began using heroin and cocaine. This habit soon became an even larger problem.

David, age 62, was overwhelmed by alcoholism. For 20 years, he slept on the St. Vincent’s Church stairs.

For a while after we first got David an apartment, he woke up very early every morning and went back downtown to the church steps. When I asked him why, he said, “I woke up in somebody else’s apartment.”

I got to know Frank, who kept his HIV a secret from everyone. His 13-year-old son had been killed in a drive-by shooting while he was in jail. 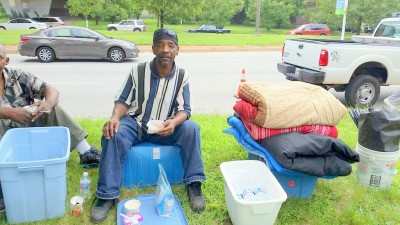 Jerrie and Carrie were homeless twin sisters who shared mental illness and addictions, one to drugs and the other to alcohol. Their 11 children had been taken from them and placed in foster care.

I met Nicole who could not read, had only a 6th grade education and whose family took her Social Security checks. Nicole hung out on the Block and earned money from winning shot-drinking contests.

Why were all these people in the park? Why weren’t they in a shelter?

They shared their reasons with me:

The shelters were always full. There were many rules in a shelter, and they felt overwhelmed by them. Shelters seemed like jail with many mean people; the people in the park were their friends whom they trusted.

Acceptance and a Home

Rather than go to a shelter, the park dwellers chose to live a 19th century life in the middle of a contemporary urban area, without toilets, heat, or running water. This spoke volumes about how to help them. 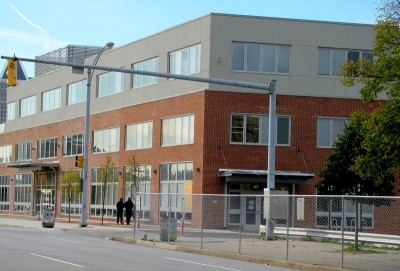 Initially, they needed to be accepted unconditionally, including their lifestyle. And they needed permanent affordable housing before any other demands upon them were made. Everything else, such as addiction treatment, mental health services, medical care and medication, could be dealt with later.

Recognizing this and having actual housing to give them was the first step to resolving their homelessness: literally putting the housing first and all of these other matters on the back burner.

The Housing First model worked. Of the people living in the park in 2005, 85% are still housed in 2015. Some have become clean and sober; others have stabilized their mental illness and medical problems. The project was so successful that the City adopted the Housing First model as the method for alleviating homelessness.

Treatment First: Or No Housing

Today, we need only look at the recent razing of a longtime homeless camp under Martin Luther King Jr. Boulevard to understand that the Housing First pledge has been forsaken by the city.

No permanent housing had been arranged for the people living in the half-dozen tents under the Franklin Street overpass before the city trucks came to haul their belongings away. Likewise with the earlier clearing of other encampments, like “Camp 83,” not far from St. Vincent de Paul Church. 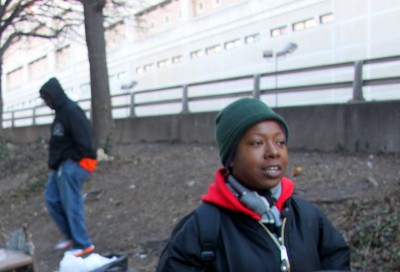 They are requiring people to complete a voluminous and irrelevant assessment tool [BDAT – Baltimore Decision Assessment Tool] before they can receive help, and those with addictions often must obtain treatment first, with no guarantees of housing afterwards.

Treatment First is not Housing First. A BDAT is not a housing voucher. And sending in the Department of Public Works to tear down makeshift homes and communities is not a solution to homelessness.

Listen to Those in Need

To ameliorate homelessness, rather than listening to the complaints of the comfortable and powerful, we need to listen to people who are experiencing homelessness.

We should focus our resources on permanent housing (in 2015 Baltimore City is spending a whopping $208,417 of general funds on permanent housing, as compared to $5.2 million on temporary shelter) and make it available to as many people as possible, without judging them.

Only then will we be able to see fewer tents and urban campsites.

– Lauren Siegel, of Housing Our Neighbors, is a longtime advocate for people experiencing homelessness in Baltimore. 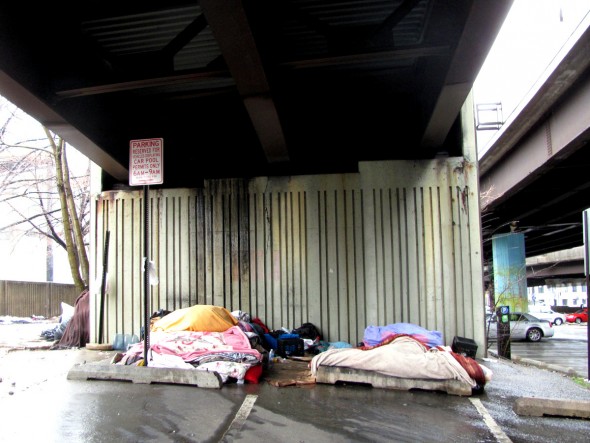 Two blocks from City Hall, the homeless sleep under the JFX during a morning shower. (Mark Reutter)