For months, representatives of the Downtown Partnership of Baltimore have said that demolition of the McKeldin Fountain is a “done deal” and not open to public discussion.

But that appeared to change on Monday, when City Council President Bernard C. “Jack” Young introduced legislation that would prohibit demolition of the fountain until full funding for the replacement project is identified and other conditions are met.

With his action, Young demonstrated that the project is far from a done deal as long as the City Council has questions about it.

He also effectively reopened a public debate about the project because his introduction of the bill means that the Council likely will hold a hearing on it, giving advocates and opponents a chance to express their views in a public forum.

In the process, Young has raised questions about why a private business group is making potentially far-reaching decisions about the public realm in Baltimore and leading an effort to tear down a public memorial in the heart of the city.

He is also questioning (perhaps inadvertently) how the urban planning process operates under Mayor Stephanie Rawlings-Blake and how public funds are spent.

By asking questions about this one project and its backers, Young has raised larger issues about the future look and shape of downtown, who is making decisions about it, and who should be.

“The Downtown Partnership is not a city agency,” Young said Monday. “We are a city agency. They should be showing their stuff to us.”

It is fitting that the debate should center on a man-made waterfall that is dedicated to former Mayor Theodore McKeldin and marks a key downtown intersection where the center city meets the water’s edge.

In the 1960s, McKeldin launched a visionary effort to transform the Inner Harbor from an industrial backwater of rotting piers and banana boats to the vibrant tourist, business and residential district it is today.

Fifty years later, the Downtown Partnership is pushing to raze the fountain that honors McKeldin and replace it with a new water feature and public gathering space that would be more acceptable to its members and would directly connect the plaza to the Inner Harbor promenade.

On the other side of the debate are people who like the existing concrete fountain and adjoining public square and don’t think the city should tear the structure down.

They say it’s a significant local example of Brutalist architecture and should be preserved. They argue that there are better uses for limited construction dollars. 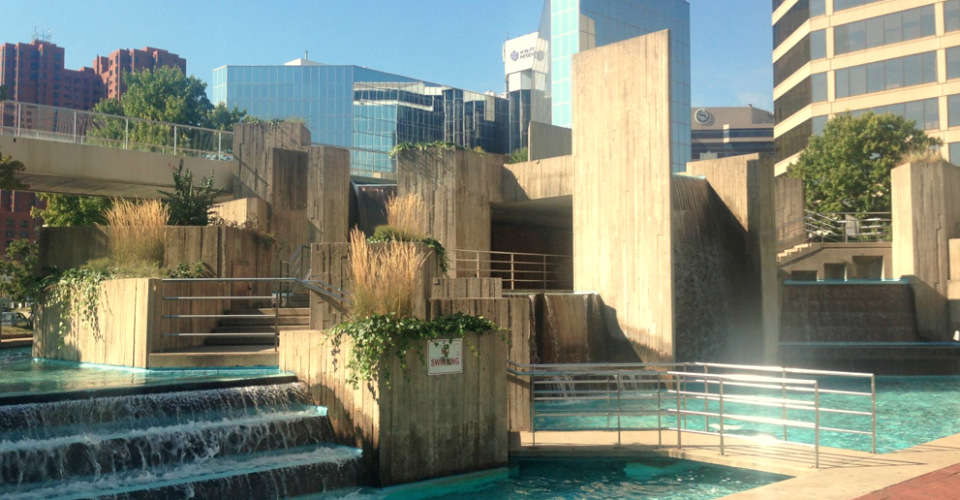 McKeldin Fountain last September when it was still running. Light fixtures cast into the concrete were designed to light the fountain dramatically at night. (Photo courtesy of BmoreArt.com)

Members of a third group have staked out a middle ground, saying they wouldn’t object to losing the current plaza and fountain as long as it is replaced with a public amenity that’s significantly better than what’s there now.

This group, which includes the board of the Baltimore chapter of the American Institute of Architects, also doesn’t want to see demolition begin on the existing fountain until there is a city-approved replacement plan and sufficient funds have been raised to carry it out.

Those conditions are consistent with the wording in the Council bill that Young introduced.

The replacement project has been the subject of public and private meetings and design review sessions as well as debate on the Internet. Discussion has focused on issues such as old versus new, cars versus people, big picture versus details, and static space versus directional.

Broader questions are also being asked: Who should make decisions about changes in the public realm? Can a fountain be considered a work of art and protected as such? What constitutes a memorial? At what point does the general public get to weigh in and when is the discussion closed?

Then there’s the question of money.

In a luncheon meeting with the Council on Monday, Young expressed concerns about the cost of the project, which has been estimated at anywhere from $10 million to $40 million, depending on its final scope.

“We want to know how much it is going to cost, how long it’s going to take, who is going to pay for it,” he said.

During the Council meeting later in the day, Young expressed an additional concern about the project’s financing. “We want to make sure that there is no city funding involved in this,” he said. 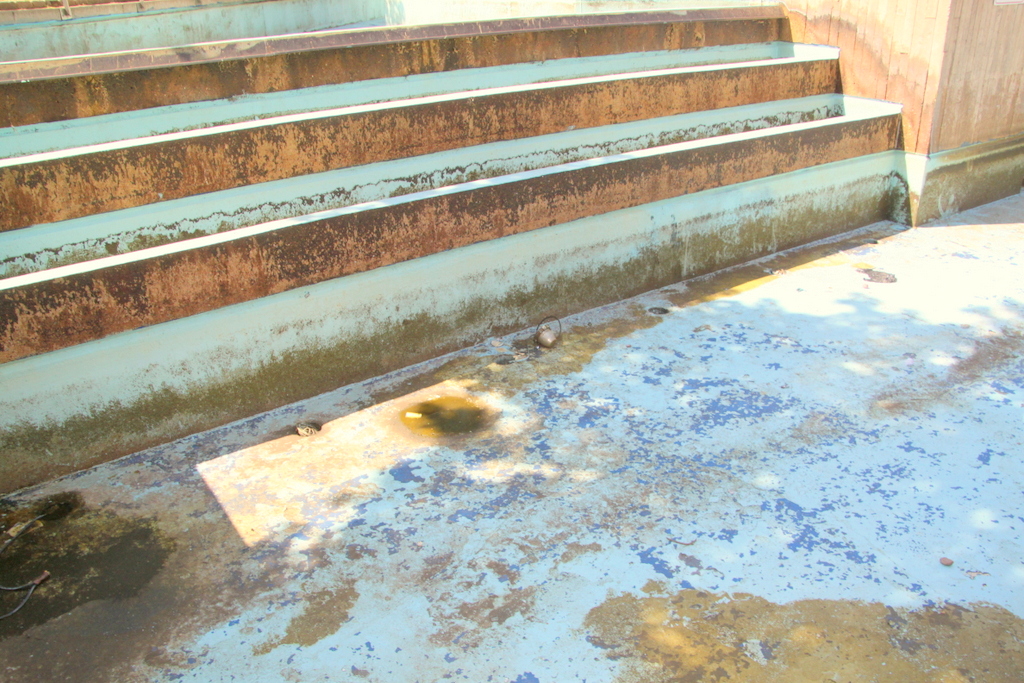 The rust-stained contours of the empty and poorly maintained McKeldin Fountain today. (Photo by Ben Halvorsen)

Because of the fountain’s prominent location and the civic leaders associated with it then and now, the debate has forced people to think about public space and urban design in a way that few other recent issues have.

“When this was built, they rewrote the urban planning books,” local designer and educator Mike Pugh said during a design briefing last May, referring to the Inner Harbor’s transformation starting in the 1960s.

“What will people visiting Baltimore today remember when they leave? What will they tell their friends about?” he asked.

Shades of the Mechanic?

The Downtown Partnership was a strong advocate of the theater’s demolition, even though the Baltimore Commission for Historical and Architectural Preservation (CHAP) had recommended that it be added to the city’s landmark list. (There was plenty of political intrigue involved in this controversy, too.)

Now the former theater site at Baltimore and Charles streets is an open pit, and construction on a replacement project has been delayed by a lawsuit filed by the operators of Downunder Parking, a garage that lost partial access to its facility due to the demolition.

PART 2 (to come on Friday): The interconnected history of the fountain and the Inner Harbor, and the multi-phased plan for a new gateway.