Scorched by criticism of last month’s razing of an encampment of homeless people living under an overpass along Martin Luther King Jr. Boulevard, Mayor Stephanie Rawlings-Blake today announced she is holding off on plans to clear another encampment along the Fallsway.

“The mayor has agreed to delay the Fallsway encampment closure scheduled for August 8th given concerns raised by the Journey Home board,” said a statement released this evening by Dawn Kirstaetter, deputy mayor for health, human services, education and youth.

The Journey Home board, a mayoral advisory panel, has complained of bureaucratic snafus and other problems severely delaying the process of finding permanent housing for homeless people. A group of homeless advocates joined board members in a protest statement today.

This evening’s statement from City Hall acknowledged those problems and said they are being addressed.

“There has been significant progress made by the Mayor’s Office of Human Services and the Housing Department to streamline the client assessment and housing placement processes,” the statement said.

But the administration also offered its rationale for undertaking the clearing actions in the first place. 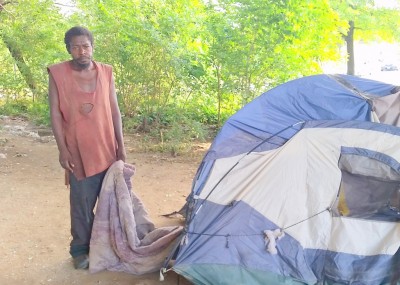 Larry Peterson, a veteran, watches as city workers clear the encampment where he had been living alongside MLK Boulevard. (Photo by Ben Halvorsen)

“The city simply cannot allow the encampments to continue indefinitely and is committed to identifying emergency shelter and permanent supportive housing for homeless individuals.

“The mayor recognizes that many of the people living in the encampments need additional services – addiction and mental health counseling, job training, and more,” the statement continued.

The mayor’s decision came shortly after a meeting in which homeless services providers and advocates read a group statement condemning the practice of encampment-razing and, essentially, refused to work with city officials carrying it out.

“Baltimore City is destroying homeless encampments without ending the homelessness of their residents. These actions are inhumane and ineffective,” said the statement read aloud by Lin Romano, chief operating officer of GEDCO, and Katie Allston of Marian House.

In front of  an assortment of officials from housing and the mayor’s office, the two women spoke at the monthly meeting of homeless services providers who receive federal “Continuum of Care” funds as well as those who are funded through state grants.

“Until the city is able to provide appropriate housing and services to encampment residents, the undersigned service providers and advocates will not participate in any activities that further displace and disadvantage our homeless neighbors,” said the statement read to the gathering of about 50 people in the Pleasant View Gardens community room.

Among the 34 signatories were Paul’s Place, the Homeless Person’s Representation Project, Catholic Charities, Housing Our Neighbors, Health Care for the Homeless, Liberty Rec and Tech Center and Bon Secours.

Representatives of the groups who signed stood at the meeting as each organization’s name was read.

Displaced and No Place to Go

At today’s “Continuum of Care” meeting, there was no direct answer from the city about its notice to clear a homeless encampment on or around August 8.

Providers had said the city had given them no warning about the June 26 clearing of the MLK encampment and did not provide any housing for the people who were living there.

Earlier this month, advocates rallied when city officials announced there was to be another razing – of a group of people living in about eight tents on the west side of the Fallsway, backing up to a Jones Falls Expressway ramp.

In a rare show of public disagreement with the mayor, the Journey Home board called for a moratorium on encampment razing until problems with the distribution of housing vouchers were ironed out.

Today it fell to meeting chair Vidia Dhanraj, director of the Homeless Services Program, to say something after the letter of protest was read.

“We are very concerned about this and want to respond in the most appropriate way,” Dhanraj said, noting that her office works with providers but also has “that overlaying role of being part of the mayor’s office. . . a very delicate role.”

“Know that it’s taken very seriously and your message will go beyond this room without a doubt,” she said in closing.

The group then moved on to a working discussion of vouchers, a subject already being tackled by a sub-committee the Journey Home board formed at its last meeting.

A housing department official presented an update on the current status of the housing subsidy vouchers, once called Section 8, now referred to as Housing First vouchers.

There are 432 vouchers leased, he said, and 112 vouchers “on the street,” meaning people have been awarded them but haven’t found a place to lease yet. He said 58 vouchers are pending, meaning the applications are still under review, and 44 vouchers have not been referred, meaning, they are sitting unused.

The statement from Kirstaetter tonight said that “more progress is expected as Housing and MOHS work closely with the Journey Home board and homeless advocates over the next few weeks.”

It also noted that Mayor Rawlings-Blake “has moved Adrienne Breidenstine, Journey Home’s director, to City Hall and will have her report directly to the Deputy Mayor for Health, Human Services, Education and Youth, effective early next month.”

The statement Kirstaetter released noted that, at the Continuum of Care meeting she attended today, she invited service providers “to present  bold, innovative solutions to barriers”

“We all share the same goal,” she said, “which is to end homelessness in our city.”