Members of the panel of advisors to Mayor Stephanie Rawlings-Blake on homelessness blasted City Hall yesterday, saying they were “blindsided” by the city’s clearing of a homeless encampment along Martin Luther King Jr. Boulevard last month.

“What happened on Martin Luther King was an abomination,” said Antonia K. Fasanelli, executive director of the Homeless Person’s Representation Project. “There were people [at the site] approved for housing vouchers who were weeks away from getting an apartment.”

Instead, on a day when city shelters were full, “they were told they had to scatter,” said Fasanelli, addressing fellow members of The Journey Home board at their monthly meeting.

She and others on the panel said the process of getting homeless people into permanent housing in Baltimore is deeply flawed and takes months and sometimes more than a year.

City officials acknowledged at the meeting that – due to bureaucratic snafus and a labyrinthine approval process – more than 200 housing vouchers that had been set aside were not being used, even in many cases for recipients deemed qualified and awarded them. 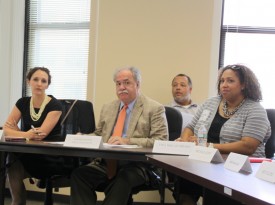 Fasanelli then made a motion calling on Mayor Rawlings-Blake to stop all encampment clearings until problems with the distribution of so-called “Housing First” vouchers are resolved and until the city can make a commitment to permanently house people living in encampments if the city feels the need to clear them.

The call for a moratorium passed with 11 of the 17 members present voting in favor and six abstaining, including Housing Commissioner Paul T. Graziano; Jacquelyn Duval-Harvey, director of the Mayor’s Office of Human Services; and Vidia Dhanraj, director of the Homeless Services Program.

An email from Dhanraj to homeless providers last week was responsible for some of the tension in the room. It signaled another homeless encampment clearing was on the way, scheduled “on or about August 8.” 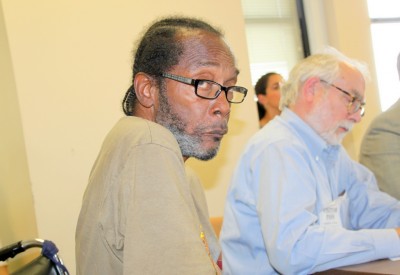 This man said he has been sleeping on the Health Care for the Homeless porch. (Photo by Fern Shen)

“We would like you to be aware that in several weeks the City will be landscaping a portion of the lower Fallsway area that will include temporary fencing for this to occur,” Dhanraj wrote.

”Several people experiencing homelessness have set up tents in this area and our office is coordinating service providers to assist them to get connected to housing and appropriate services.”

There were eight tents at the Fallsway encampment yesterday – a strip of grass backing up to a Jones Falls Expressway ramp, across the street from Health Care for the Homeless and a city vehicle maintenance facility.

“Everybody has been keeping this whole block as clean as possible,” said Ramon Vegas, 41, who said he has been living there in a tent for about a month. “We heard from city workers, the rumor was always that as long as we keep this area clean we can stay.”

Vegas, who said he has mental health issues, a record for drug sales and has been unable to get a job, said he left a house where he was staying nine months ago because he feared the residents were trying to take his disability checks.

Vegas said he hopes to find a better place to live in, but that, meanwhile, moving encampment residents “doesn’t solve nothing at all.”

“We keep it clean. But because we’re poor people, some of us on drug programs, we’re considered like we’re nothing,” Vegas said. ” We’re like everyone else. Anyone can end up in this situation.” 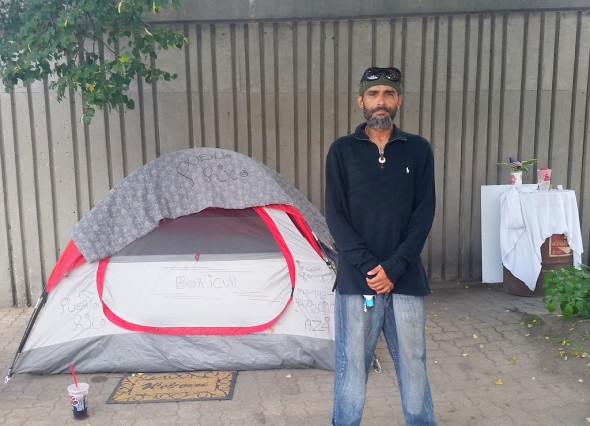 Ramon Vegas has been living besides the Jones Falls Expressway along the Fallsway for about a month. (Photo by Ben Halvorsen)

Others who had been living outside in or near the encampment came to yesterday’s meeting and said they have been desperately trying to find shelter.

“May I say something,” said a soft-spoken man in a wheelchair.

“I just recently got out of a nursing home. I had prostate surgery and my health is not up to par,” he said, telling a reporter that he was homeless before getting the surgery and is homeless now, sleeping outside on the Health Care for the Homeless “front porch.”

“I’d like to go somewhere and get a rest,” he said.

Graziano, who chaired the meeting, acknowledged that the process of housing voucher distribution is in need of repair and asked for volunteers to form a committee to analyze it.

“Having 228 vouchers available but not utilized is not helping us solve the problem,” he said. “We don’t have any pride of authorship here.”

Duval-Harvey was less sanguine about what was, essentially, an indictment of the system she oversees, and she had a pungent reply to the sharp words coming from Kevin Lindamood, president and CEO of Health Care for the Homeless. 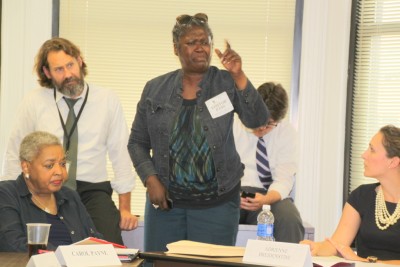 This woman, who said she was a Navy veteran and homeless, spoke at length about her difficulty in finding shelter. (Photo by Fern Shen)

Lindamood said, “If we’re dedicating these numbers of vouchers and we can’t expedite beyond a year, beyond eight months, beyond seven months, actual placement I’d say we’re failing.”

Duval-Harvey responded, “Is it the position we’re taking that people are better off staying on the street than any other alternative except if they get permanent housing?”

“So why do we have a Continuum of Care [concept]? Isn’t the point that we move people through the process?” she continued. “So that’s it, encampments or housing?”

“That’s a false dichotomy, Jackie, if you will,” Lindamood shot back.

“You’re well aware that there are not sufficient shelter resources that we can access for extremely vulnerable people who have addiction and mental health problems. You’re aware that our shelter capacity is insufficient. So we have a math problem.”

Lindamood went on to denounce the city’s recent clearing of homeless encampments, which providers and advocates said was undertaken without consulting them and with no plan for housing ousted occupants. (Homeless advocate Christina Flowers said she found housing for two people from the MLK Blvd. encampment. Otherwise, none appear to have been housed.)

“I find it appalling that this group was not consulted on the city’s encampment policy when we are the policy board advisors to the mayor,” Lindamood said.

Duval-Harvey jumped in at this point to challenge Lindamood and the exchange turned testier still.

“You have an encampment practice and it’s very consistent, lately,” Lindamood snapped back. “Anything in writing that says encampments will be surrounded by bike racks and removed is a policy.” 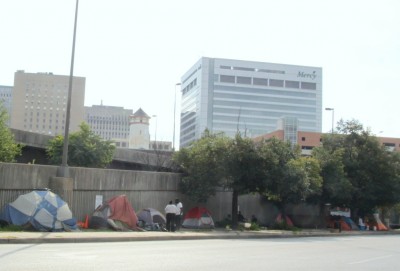 But Duval-Harvey wasn’t backing down, saying “there is no such written policy.”

“The encampment guide speaks only to the cleaning of the area.,” she said.

“There is a guide around cleaning encampments to make sure they are sanitary and that individuals are not ill as a result of the conditions.”

(For reference see this 3/14/13 Brew story on the city’s Protocol for Dismantling Homeless Encampments, entered into the record at a March 2013 City Council hearing.)

At this point, Dawn Kirstaetter, deputy mayor for Office of Health, Human Services, Education and Youth, jumped in.

“Let me just speak up and say the mayor wants no citizen in Baltimore to be homeless,” she began.

“Well she ain’t here!” ” You can’t tell!” some of the people in the audience said back.

Kirstaetter replied that she was representing Rawlings-Blake and spoke in a loud voice to regain the floor.

“We have heard you! We’ve heard you,” she said. “We’ve been at the table, we’ve been listening to you now. I don’t want Jackie to have to defend things,” Kirstaetter said.

She made reference to a chart, the Baltimore Decision Assistance Tool (BDAT), that advocates said makes the process of getting housing for needy people take months.

Jeff Singer, the former Health Care for the Homeless CEO and now of Housing Our Neighbors, was among those in the audience brandishing the BDAT chart like a protest sign.

“One of the residents of the encampment recently destroyed on Martin Luther King Jr. Blvd. described having waited eight months for housing after he had been found eligible for an existing voucher,” Singer said, speaking to a reporter after the meeting. 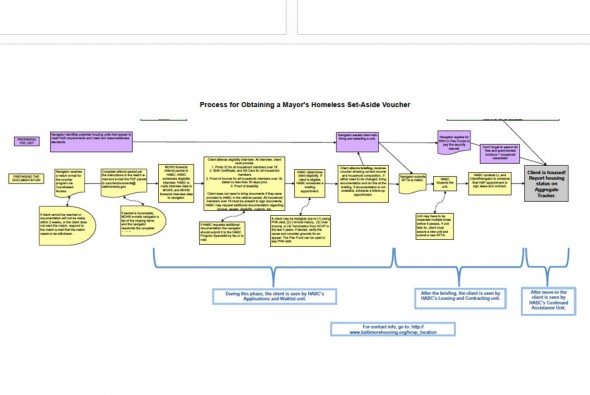 He and other advocates and providers said such delays are common due to the BDAT process.

“Some people are holding up something that looks like a maze,” Kirsteatter said. “We are examining that with great urgency.”