Long-sought by frustrated commuters in Baltimore, real-time bus performance data has a tentative release date, a spokesman for the Maryland Transit Administration said at a meetup of transit and technology professionals.

“According to the current schedule, real-time data is on track to be available by early 2016,” said Michael Walk, MTA’s director of service development.

Making the raw data available, Walk observed in his presentation Monday night, would “take the MTA out of the app business.”

He was one of about a half-dozen speakers at a meet-up organized by the Association for Commuter Transportation, an international trade association that was holding its annual meeting at the Hyatt Regency Hotel.

The on-time performance of MTA buses in Baltimore has been a sore point, with commuters and tech activists demanding the release of data on bus service that’s been criticized as late, crowded and unreliable.

Walk gave an update on the transit agency’s efforts toward providing the long-sought real-time data for Maryland.

“We launched our real-time system [My Bus Tracker] a couple months ago to some criticism,” he said. “Some people were thankful for it. Surely it has its flaws.” 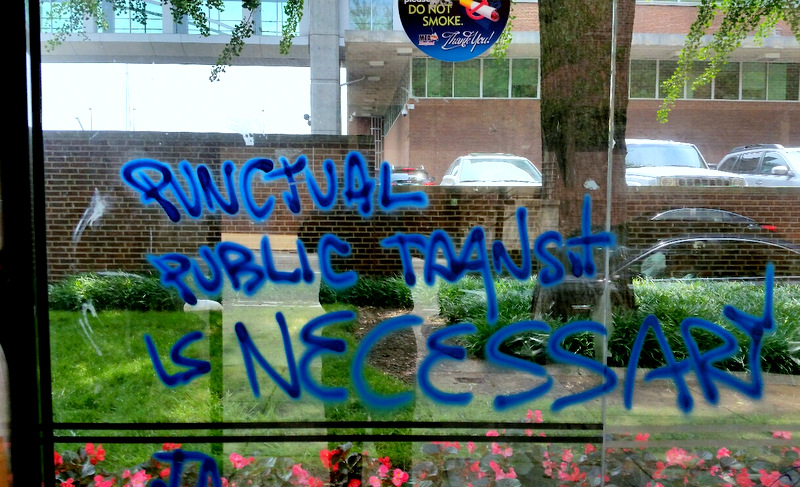 Message scrawled on an MTA bus shelter at Calvert and Centre streets. (Photo by Mark Reutter)

Walk’s presentation noted that “it was always the MTA’s intent to release the data,” so that the technology community could have access to it and could possibly put it into a less cumbersome form.

But “other priorities trumped” its release, he said.

“I wish I could come here and say, you can get the data here,” he said gesturing. “But it is coming.”

The data will be available in GTFS-RT (General Transit Feed Specification), a common format for public transportation schedules and associated geographic information. 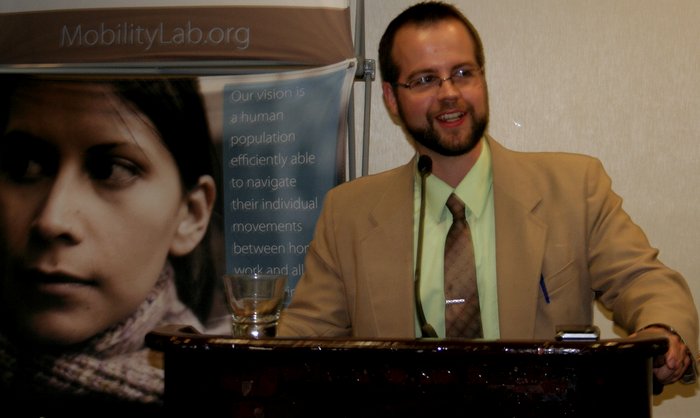 Michael Walk speaks about MTA’s plans to make more of its data open.

He discussed the data that MTA currently makes available for its various modes of transportation and said eventually MTA would have ridership data for every bus route, by stop, and hoped to publish it on Socrata, an open data platform.

His presentation noted that MTA bus on-time performance data would be close to machine-readable by October and available not long after.

He did not respond today to a follow-up email and phone call from The Brew asking for specifics on its release.