The National Aquarium is in violation of its 2004 agreement with the city of Baltimore that called for it to complete the $35 million first phase of a $110 million aquatic life center campus in South Baltimore by the end of 2012.

As a result of the aquarium’s failure to build what it promised, the city has the right to “reenter and take possession” of the property it sold to the aquarium at a below market price in 2007, according to the agreement, which was on file at the City Comptroller’s Office.

After repossessing the land, the city would have the right under the agreement to resell or lease the property, in whole or in part, to recoup its losses and carry out its goals for the area. It also could retain the land.

But the Rawlings-Blake administration so far has never exercised these legal rights intended to protect city taxpayers, nor apparently confronted the aquarium over its non-performance.

Instead, the aquarium – on whose board of directors the mayor sits – has been allowed during the last three years to “reevaluate” its options, which it says may include selling some of the former city land to private developers.

“It’s a mess,” a source in city government said yesterday, “because no one is responsible for monitoring what’s going on.” The source asked not to be identified because of the sensitive nature of the subject.

No Response from City

Following inquiries by The Brew, the city appears to be taking a closer look at the 2004 Land Disposition Agreement.

Yesterday, the Baltimore Development Corp. (BDC), which structured the agreement with attorney Mark Pollak, declined to answer a set of questions about the deal. 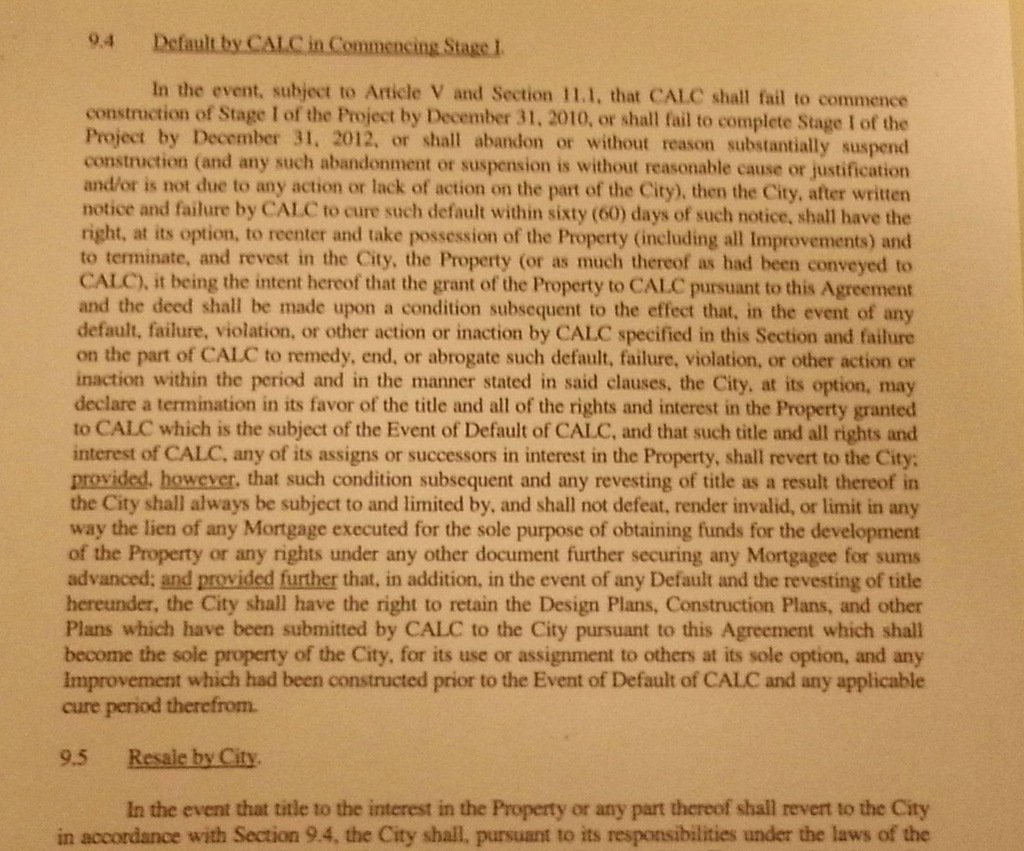 The 2004 land disposition agreement sets out in detail the city’s right to repossess the land it sold to the aquarium if the contract between the two is not met. Here is some of the legal wording.

A spokesperson for William H. Cole, president and CEO of the BDC, explained, “We have deferred these questions to the law department as it is a legal matter now.”

George Nilson, the city solicitor, did not respond to the same set of questions.

Aquarium officials also have not responded this week to questions about the organization’s lack of compliance with the land disposition agreement.

The 2004 document that was on file at the Comptroller’s Office last week was removed as of yesterday to an undisclosed city department.

Howard Libit, a spokesman for Mayor Stephanie Rawlings-Blake, has not responded to numerous requests for information.

The land in question includes West Covington Park, a 7-acre waterfront conservation area that has received at least $2.3 million in federal funds, yet has never opened to the public. The park is four years behind its original construction schedule.

This is the area where Sagamore Development, the real estate arm of Under Armour CEO Kevin Plank, has been buying property to build a new headquarters for Under Armour.

The city sold the 19 acres at bargain rates in 2007 to an aquarium affiliate, the Center for Aquatic Life and Conservation (CALC), to be used as the site for an aquatic life center campus that never materialized. 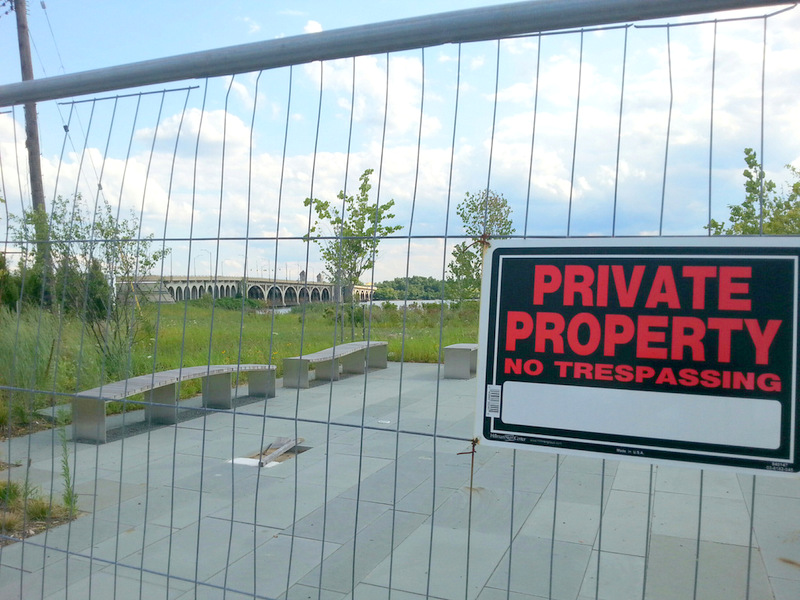 West Covington Park is the only part of the original plan that has been constructed. But it remains fenced off and closed to the public. (Photo by Ed Gunts)

The terms of the sale, including the city’s right to reclaim the property in case of non-performance on the part of the aquarium, are spelled out in a 100-page land disposition agreement that was approved by the Board of Estimates on December 22, 2004.

At the time, the three elected members of the five-member spending board were Mayor Martin O’Malley, City Council President Sheila Dixon and Comptroller Joan M. Pratt.

The land disposition agreement contains an anti-speculation provision written to protect the city in the event the aquarium seeks to profit from any sale of the land or fails to build what it promised within a specified time frame. 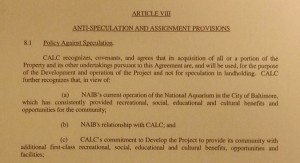 The anti-speculation provisions in Article 8 of the 2004 land disposition agreement.

The agreement was signed by former aquarium executive director David Pittenger and Comptroller Pratt. The anti-speculation provision remains in effect until December 31, 2034, according to the agreement.

Within six months, the aquarium sold off the Dickman Street land it had purchased for $89,000 from the city for $1.5 million to developer Patrick Turner.

The August 2007 sale was never approved by the Board of Estimates, as required by the land disposition agreement.

Dixon had become Baltimore’s mayor and served on both the Board of Estimates and the aquarium’s board.

Aquarium: What it Said it Would Do

According to a detailed “project plan” in the land disposition agreement, the aquarium was required to build a variety of facilities on the land.

The plan also called for a hotel and conference center and a waterfront public park.

“This project brings together two great strengths of Baltimore: the waterfront and the National Aquarium and its reputation, locally, regionally, nationally and internationally, to reclaim this part of Baltimore and be a catalyst for more development around the Middle Branch,” Andrew Frank, then-executive vice president of the BDC, told the Board of Estimates.

When work is complete, Pittenger said, “we expect to have a beautiful revitalized part of the city.”

As the 2012 deadline approached, the aquarium made little progress on meeting its obligations under the land disposition agreement.

The aquarium’s biggest obstacle to meeting the deadline was the property it sold to Turner at 101 West Dickman. The developer ran into financial troubles and lost the parcel in a 2013 foreclosure sale to Plank’s Sagamore Development, thwarting the aquarium’s chances of ever completing its project.

But aided by federal and state funds, the aquarium did move ahead with construction of a park along the shoreline.

West Covington Park was supposed to be completed in 2011 but it is still not open to the public.

That failure to open the park puts the aquarium in violation of another provision of the land disposition agreement – a section that requires the park to be not just complete in terms of construction but open and accessible to the public on an ongoing basis.

Aquarium officials say they have made substantial progress in creating the park but only the city’s Department of Transportation has the authority to open it.

The aquarium also disclosed this year that it is reevaluating its holdings on the Middle Branch and may decide to sell them altogether.

Although John Racanelli, CEO of the aquarium, acknowledged that the group has been involved in “conversations” with Kevin Plank’s Sagamore group about the aquarium’s Middle Branch holdings, a spokesman for Sagamore said late last week the company has no interest in buying the aquarium’s park.

Racanelli said last month that part of the delay in completing the park was that the aquarium official in charge of overseeing its construction took a job outside the aquarium and was not replaced right away.

The aquarium encumbered one of its parcels, 2400 Clarkson Street, by negotiating a side agreement that permits Sagamore Development to use part of it in conjunction with its city garage development on Dickman Street.

The agreement between the aquarium and Sagamore was not brought to the Board of Estimates for approval, as required by the 2004 land disposition agreement.

According to page 43 of the agreement, if the aquarium fails to make progress on its development, the city can “reenter and take possession” of the land and resell the land after taking it back from the aquarium.

Part of the land is not parkland and adjoins the manufacturing and design center that Sagamore is building on Dickman Street.

“In the event, subject to Article V and Section 11.1, that CALC shall fail to commence construction of Stage I of the Project by December 31, 2010 or shall fail to complete  Stage 1 of the Project by December 31, 2012, or shall abandon or without reason substantially suspend construction (and any such abandonment or suspension is without reasonable cause or justification and/or is not due to any action or lack of action on the part of the City,) then the City, after written notice and failure by CALC to cure such default within sixty (60) days of such notice, shall have the right, at its option, to reenter and take possession of the Property (including all Improvements) and to terminate, and revest in the City,  the Property (or as much thereof as had been conveyed to CALC).”

The agreement goes on to say that in the event of a default by the aquarium, “the City, at its option, may declare a termination in its favor of the title and all of the rights and interest in the Property granted to CALC which is the subject of the Event of Default of CALC, and that such title and all rights and interest of CALC, any of its assigns or successors in interest in the Property, shall revert to the City.”

If title to the interest in the property, or any part of it, reverts to the city, page 43 states, “the City shall, pursuant to its responsibilities under the laws of the State of Maryland and the ordinances of the City, use all reasonable efforts to sell or lease the Property and any Improvements or such part thereof as soon and in such manner as the City shall find feasible and consistent with the objectives of such laws and ordinances.”

In addition, the provision continues, “the City shall use all reasonable efforts to obtain the highest price or rent that is compatible with the objectives and restrictions applicable to the Property in this agreement.”

Despite the agreement, the city never took steps to repossess the land from the aquarium.

With full ownership of the land, the aquarium has allowed Ted Rouse’s non-profit Big City Farms to occupy part of the Clarkson Street parcel to grow vegetables in greenhouses as a job-creating and food-producing venture. 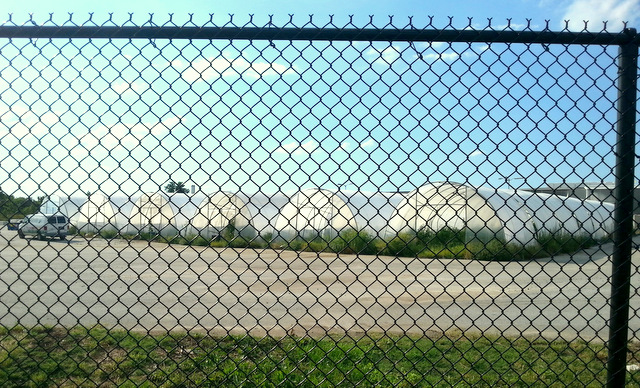 Big City Farms greenhouses occupy part of the aquarium’s Middle Branch land. Urban farming was not cited as a permitted use of the property when it was sold to the aquarium. (Photo by Ed Gunts)

According to aquarium CEO Racanelli, Big City Farms does not pay rent and occupies the land on a month-to-month basis.

Urban farming is not one of the uses mentioned in the land disposition agreement between the aquarium and the city.

Racanelli said Big City’s leaders know they may eventually have to vacate their Middle Branch location, depending on what happens with the land.

Racanelli said Big City Farms is part of the Food Hub development planned for East Baltimore and he is hopeful that the East Baltimore site will be a good alternative location for Big City if it needs to move away from the Middle Branch.

Meanwhile, the unfinished West Covington Park is becoming strewn with trash, both from the water side and the land side.

A DOT spokesperson said last month that the agency is working to open the park but would not provide a date.

She has not responded to a request for an update this week.