The Hanover Street Bridge in South Baltimore will turn 100 years old next year, and city officials are about to begin a two-year study to determine if it needs to be replaced or if they can get more life out of it with repairs.

Baltimore’s Department of Transportation has selected AECOM of Los Angeles, a firm with extensive bridge design expertise, to be the lead consultant for a $1.8 million study to help determine how much longer the bridge can serve as a southern gateway to downtown Baltimore.

The study is starting just as a wave of development is spreading along the Middle Branch of the Patapsco River, which the span crosses. Under active planning is a new headquarters for Under Armour at Port Covington and a mixed-use community in Westport by a development company formed by UA’s CEO, Kevin Plank.

The first Under Armour employees are expected to move into a rebuilt ex-Sam’s Club building at Port Covington early next year.

Today it is one of the main routes into downtown for drivers coming from Brooklyn, Glen Burnie and other points to the south.

For many years, commuters have complained about poor driving conditions on the bridge, from uneven surfaces to potholes to spalling concrete. The city typically spends more than $500,000 a year for maintenance.

At the same time, the bridge is probably the most handsome span in the city, with a series of arches and four central towers framing a drawbridge span.

Designed by the world-renowned Baltimore engineer John E. Greiner in a Beaux Arts style, it was opened in 1916. The bridge is 2,290 feet long and is known as a bascule bridge. That means it has a moveable section that swings upward to let taller vessels pass by underneath.

“It’s a very unique type of bridge,” said Valorie LaCour, chief of transportation planning for DOT. “This study will tell us whether to replace it or rehab or modify it.” 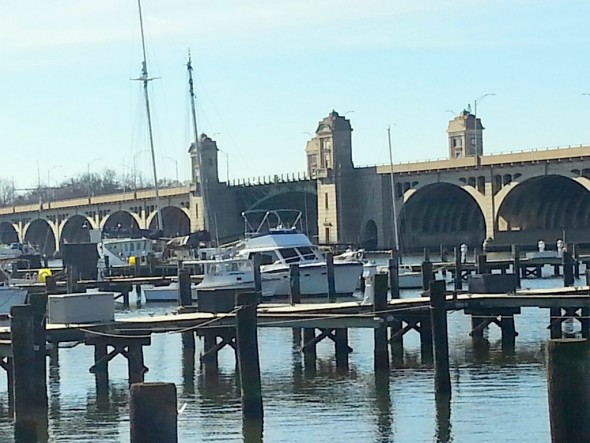 The area near the Hanover Street Bridge also is being considered for a major makeover. (Photo by Ed Gunts)

Although the bridge has not been designated a historic landmark, its age and beauty will be taken into consideration, LaCour said.

“We are approaching it as a historic structure,” she said. “We are looking at: What is the appropriate direction to take? It’s one of the most beautiful bridges out there.”

The study will look at a 1.4 mile-stretch of the Hanover Street corridor from Wells Street on the north to Reedbird Avenue in Cherry Hill on the south.

The scope of work includes assessing the physical condition of the bridge and the areas on either end of it, gathering information about bridge usage, completing a traffic impact study and an environmental study, and preparing a final report.

The consultants will also look at recreation, education and development opportunities along the corridor.

The cost of a replacement bridge has been estimated at $100 million to $150 million, while repairs could be considerably less.

The Federal Highway Administration has agreed to allocate $1.1 million toward the cost of the study and the city will pay $700,000.

LaCour said the city expects the money to become available after February 15, when the city signs an agreement with the federal government, and work will begin after that.

LaCour said one of the first steps will be community meetings to brief residents and others about the project. If work begins in early 2016, she said, a final report will be due in early 2018.

AECOM’s selection was a key to moving the project forward. LaCour said nine teams bid to work on the study, and the list was narrowed to five and then the preferred candidate.

Many Issues to Address

The consultants will be asked to look at a number of issues specific to the existing bridge and its location. They include:

• Should the existing bridge be preserved and repaired because it has historical and architectural significance?

• Should it be designated a historic landmark or would that complicate matters?

• If the city decides to build a new bridge, what would happen to the existing one?

• How would traffic be handled while construction is underway, either for repairs or replacement?

• What would happen to the drawbridge? Should a replacement bridge be a drawbridge too, or should it be a fixed bridge with more clearance over the water?

• Is the bridge’s current set up of two northbound lanes, two southbound lanes and one in the middle that is reversible sufficient for the future? Are more lanes needed?

• Can the bridge spur economic development? Planners say the corridor under study will extend roughly from I-95 on the north to Cherry Hill on the south. How can the land at either end of the bridge be improved or reconfigured to promote revitalization?

• Should the bridge be used to promote Baltimore’s “brand”? Some regions have used bridge projects to create symbols for the area, from tiny Jim Thorpe, Pa., to areas such as Tampa-St. Petersburg, Florida and San Francisco.

LaCour said the scope of this study does not include designing a replacement bridge, if it turns out that is the recommendation. She said that would be a separate contract based on recommendations from this study.

LaCour said she thinks the chance to design an iconic bridge as a gateway to South Baltimore would draw interest from world-class designers.

“We would end up with an iconic bridge,” she stated. “It better be because it will be there for the next 100 years.”