City officials and the Port Covington developer crowed last week about how, after days of negotiations with the group BUILD, they had toughened up an April Memorandum of Understanding linked to the project’s unprecedented subsidy.

The updated MOU was not final and an approved version still had not been released officially last night, when the City Council gave preliminary approval to the $660 million TIF Tax Increment Financing deal.

Councilman Carl Stokes acknowledged that he and other Council colleagues hadn’t fully read the whole 38-page document –  meant to ensure citizens benefit from the publicly-financed, 260-acre mixed-use water development on the South shore of Baltimore.

But activists scrutinized the version that began to circulate hours before yesterday’s vote and said it was still pretty much the deal they had rejected in negotiations with the Sagamore Development Co.

“This is not a major improvement over the April version, at least not for the poor,” Barbara Samuels, of the American Civil Liberties Union of Maryland, said yesterday.

“Also, none of the loopholes and enforceability problems with the April MOU have been fixed. In fact, they have been reaffirmed.”

Samuels and others from Port3 and Build Up Baltimore, two coalitions composed of housing, community, labor and justice groups, held a news conference outside City Hall before last night’s vote.

“The development looks beautiful. . . But it will only work for our people if they can get jobs that pay them enough to support their families,” Clarke said.

Citing the public subsidies for waterfront tourist development dating back to the 1970s, she said few of the employers there have kept promises to pay a decent wage and let people organize.

“We don’t want that at this ‘model city’ in the city in Port Covington,” she said.

The raft of flaws the groups identified – language they said still leaves state funding for city schools vulnerable, lack of an enforcement clause and more – contrasted sharply with the array of benefits in the agreement BUILD had called unprecedented.

• A $25 million pledge to fund workforce development programs in Baltimore.

• A $10 million donation to fund creation of a small business loan program.

• A previously announced $39 million commitment to six South Baltimore communities by Sagamore, including a $5 million cash infusion in the neighborhoods that surround Port Covington.

• A $23 minimum wage agreement on the first $50 million of construction at Port Covington.

BUILD leaders said the deal, while not perfect, is historic and precedent-setting.

“This deal truly moves from what were promises and goals to mandates that have real teeth,” said Andrew Foster Connors of Brown Memorial Park Avenue Presbyterian Church.

But the deal’s critics say the opposite, decrying qualifying language and contingencies that render it much less meaningful.

On affordable housing, the agreement nominally requires the developer to make 20% of the rental units at Port Covington affordable. Some 60% of that 20% will be built in Port Covington, with the rest off-site.

But the developer can still buy its way out of the agreement for “a trivial fee,” according to the Monisha Cherayil, lead lawyer with the Public Justice Center.

The upshot of that language is that the developer would have to make only about 5% of the proposed 5,230 units affordable to families at 80% of the Average Median Income (about $66,000 for a family of four.) 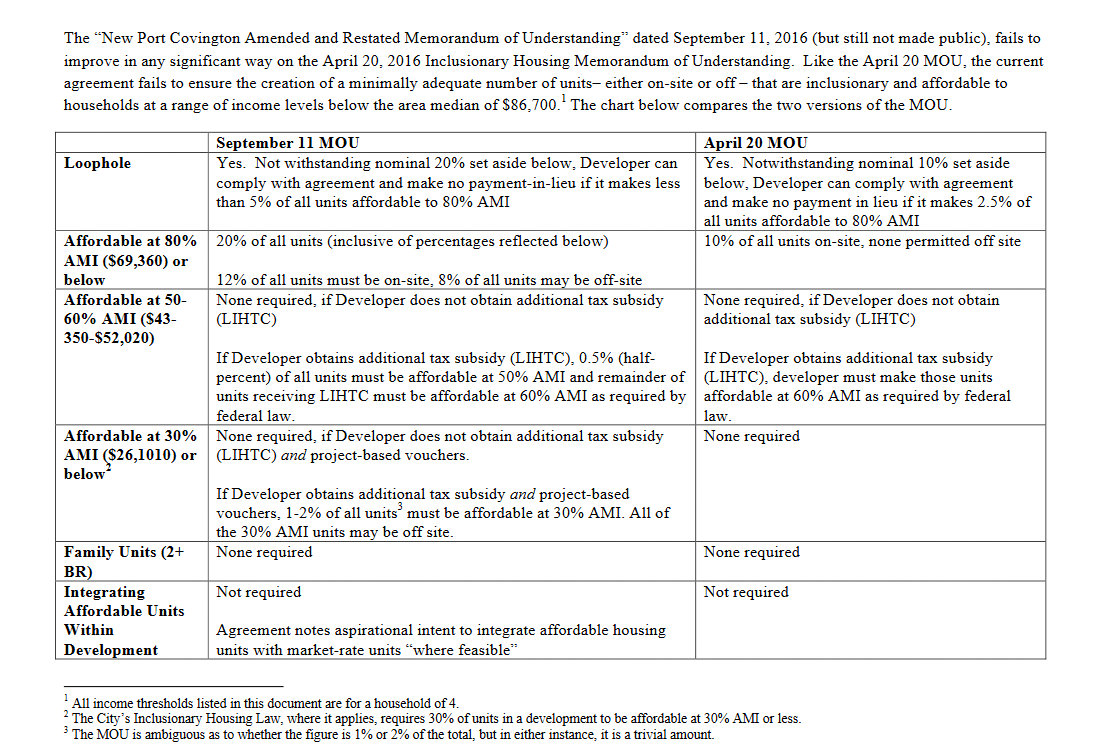 For families at 30% of AMI (about $25,050 for a family of four), the  language in the agreement means less than 2% of the rental units would be affordable, according to Samuels.

Nearly a quarter of Baltimore residents live in poverty, earning that amount or less.

The housing and other provisions in the agreement confirmed fears among some that the new neighborhood would deepen the divisions and inequity that plague Baltimore.

“Public resources will be poured into making the ‘New Port Covington’ a success, meanwhile Black Baltimore neighborhoods will suffer,” said Brown, an assistant professor at Morgan State University and the leader of the Baltimore Redevelopment Action Coalition (BRACE).

In the final weeks of wrangling over Port Covington, questions about the financing of the deal and the size of the TIF receded from the discussion, although none of those details have significantly changed.

BUILD, in fact, was among the strongest voices questioning whether the deal would leave taxpayers on the hook or siphon resources from the rest of Baltimore.

The lack of a market study, overly optimistic growth projections, no analysis of what happens in the event of a market downturn – these concerns and more were raised by an independent review of the TIF application paid for by BUILD.

At the critics’ news conference outside City Hall yesterday, Robin Dorsey raised those issues and others again.

“It’s unclear, for instance, whether the agreement covers developers that purchase the land from Sagamore,” said Dorsey, a program manager at the Maryland Consumer Rights Coalition. “There are no stated remedies for non-compliance.”

Dorsey said her organization advises consumers to “take their time, slow down and read the fine print.

“We wish the City Council would take that advice, ” she added.