Even before the Covid-19 pandemic struck, the key element of the business plan for Port Covington – that it would be the home of a new world headquarters for Under Armour – had been undermined by the shaky status of the struggling sportswear maker.

Nevertheless, amid a full-blown economic recession and a depressed real estate market, Mayor Bernard C. “Jack” Young is moving ahead to commit Baltimore to the biggest TIF tax subsidy in history.

The administration revealed this afternoon that it will seek Board of Estimates approval of $148 million in tax increment money to construct public infrastructure for Phase One of the Port Covington office-apartment complex in South Baltimore.

Because Baltimore’s bonding authority has reached its limit due to earlier TIF subsidies for Harbor Point and other developments, the Covington bonds will be issued by the Maryland Economic Development Corporation (MEDCO).

But the city will be on the hook to cover any shortfall of principal and debt service over the next 40 years if tax revenue from Phase One of Port Covington fails to materialize.

The agenda, issued today, provides no further information on the TIF package, which is expected to be approved at Wednesday’s meeting because Young controls three of its five board seats.

A fourth vote is held by Comptroller Joan M. Pratt, who has earlier expressed her full support of Port Covington TIF spending.

Scott: “You should ask them”

The fifth vote is held by City Council President Brandon M. Scott, who has expressed little interest and less knowledge about the Port Covington TIF.

Asked by The Brew last Thursday about the bond issuance, which had been rumored at City Hall for weeks, Scott deferred to the Young administration.

“You should ask them. That’s their determination [when to call for the bonds to be issued]. It’s totally up to them,” he said.

Asked if subsidizing Port Covington would put undue strain on city finances, Scott answered, “We have to wait and see what they [the Young administration] put forward first.”

Having won the Democratic Party primary for mayor last week, making him Baltimore’s presumptive next mayor, Scott was asked if subsidizing Port Covington at this time would put undue strain on city finances, Scott answered, “The world is changing by the moment. We have to wait and see what they put forward first.”

Legal approval of TIF funds for Port Covington was approved by the City Council in September 2016 after an intense p.r. blitz by Kevin Plank, then a darling of Wall Street as the founder and CEO of high-flying Under Armour.

Plank promised to build UA’s new global headquarters at the site and to use his own real estate company, Sagamore Development, to erect a $5 billion “city within a city” of soaring office towers, heated lakes, a light-rail transit system and extensive waterfront parks and activities.

Scott, a councilman representing struggling East Baltimore, voted in favor of the TIF subsidy. At the time, his campaign treasurer, Alicia Wilson, worked as a vice president for Plank’s Sagamore Development. 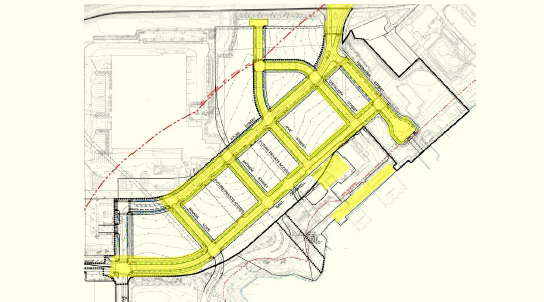 Neither Weller nor the Baltimore Development Corporation will say if Plank has any personal money at stake in Weller Development – or if he just owns the vacant industrial land that would hugely appreciate in value if sewers, roadways and other horizontal infrastructure were built using the TIF funds. 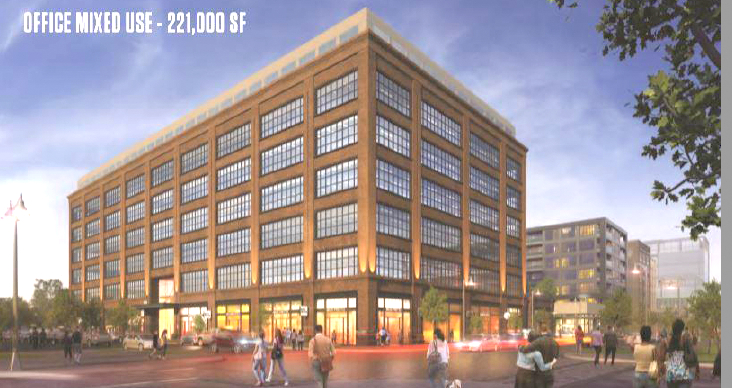 An artist’s sketch of possible office space at Port Covington. No major tenants or vertical developers have been identified, making the city’s TIF expenditures for infrastructure highly speculative. (Weller Development)

The Brew has reviewed publicly-undisclosed documents, prepared last December by Municap Inc. and Weller Development, on the proposed TIF package.

They show that the Phase One will subject the city to considerable financial risk.

The key risk comes from the fact that, despite three years of promotion, including trying to lure Amazon to built its second headquarters at Port Covington, Weller Development has not gotten a solid commitment from any “vertical” developer – and limited interest from potential commercial tenants.

Weller has not gotten a solid commitment from any “vertical” developer – and limited interest from potential commercial tenants.

So far, according to the TIF application submitted by the developer, only three cybersecurity firms have agreed to lease 39,595 square feet of office space. In addition, Weller says it has been in talks with an apartment operator seeking to build 101 short-term rental units.

That leaves about 85% of the mixed-use space planned for Phase One vacant, including a proposed grocery store, retail shops and small apartments to be clustered along East Crowmwell Street, between the Plank-owned Sagamore Distillery and the Sun Media Group.

Eleven Years in the Red

What’s more, even if all of the vertical development benchmarks are met, property tax revenues from the build-out of Phase One will not cover bondholder payments for the first 11 years (from 2021 to 2031).

The shortfall will necessitate an estimated $47 million “special tax” assessed against property owners and the developer.

Typically, a special tax is used as a backstop in the event that revenues are insufficient for a limited period of time. In this case, however, the special tax is a planned source of debt service for more than a decade before the project breaks even and begins to generate revenues.

Who exactly will pay the special tax is up in the air.

Fully half of the costs, Weller surmised in its application, will be paid by Under Armour, who purchased 50 acres of Port Covington land from Plank for its now-halted headquarters campus.

Will the new leadership at UA – Plank was demoted to executive chairman and brand chief last December 31, while Patrik Frisk was promoted to CEO – cough up millions in taxes for land it no longer wants?

Among the items to be reimbursed are $433,279 paid to lobbyists and lawyers who flooded City Hall in 2016 to win approval of the TIF package. 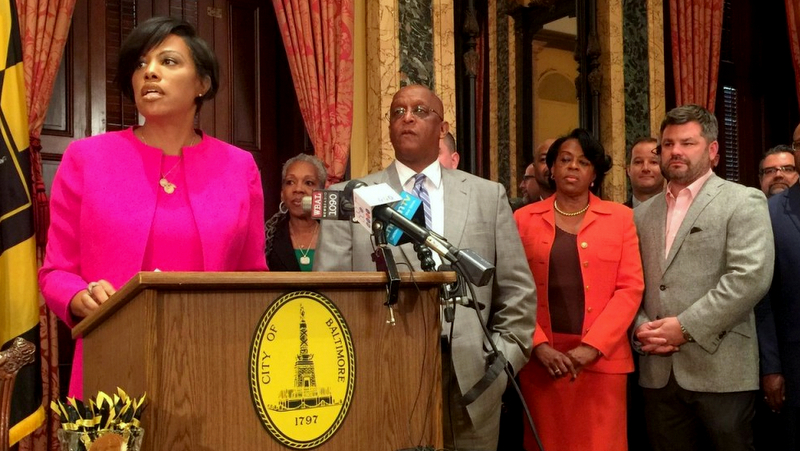 A more likely outcome can be deduced by the situation that Baltimore finds itself in at its Poppleton TIF district.

The city sold $10 million in TIF bonds to pay for public infrastructure at two apartment buildings near the University of Maryland BioPark.

Taxpayers have been forced to pay on those bonds since 2017 because the buildings have not yet opened.

The developer, La Cite, avoided paying higher property taxes by successfully arguing to Maryland assessment officials that the buildings are not finished and thus the developer is not liable to full taxation, leaving the city holding the bag. 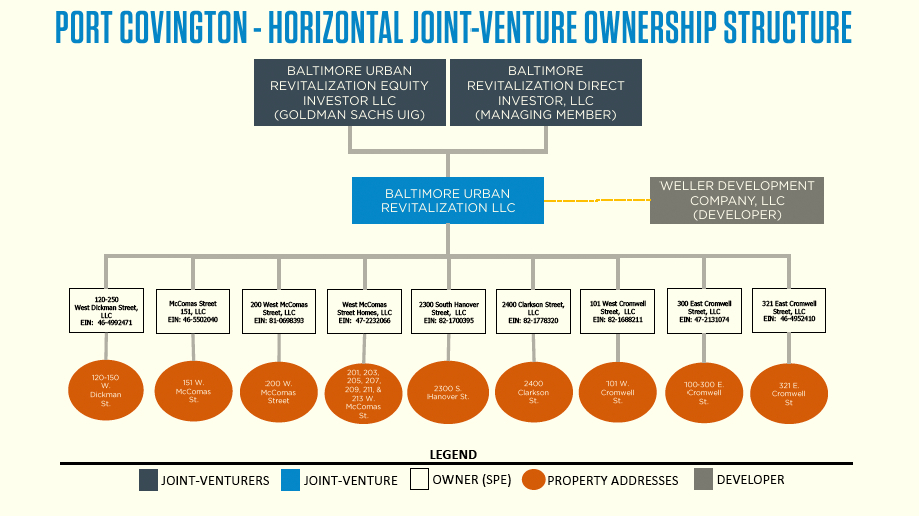 With Kevin Plank’s real estate company out of the picture, the financial structure of Phase One is both complex and highly secretive – for example, who or what constitutes “Baltimore Revitalization Direct Investor LLC” has not been revealed.

In its original application in 2016, Sagamore Development promised to pay for all property tax shortfalls.

Plank also said he and his partners were willing to buy the TIF bonds and bear the risk if the project stalled and did not generate sufficient funds to pay back the bonds.

All that is now off the table, according to the Weller’s application for TIF funds.

In its original application to the city, Sagamore Development also pledged to pay for “soft costs.” But the latest TIF application calls on the city to divert $25 million of Phase One TIF money to pay for prior development costs.

This maneuver will allow Plank and Weller to collect back what they  spent to sell the project in the first place.

Among those items to be reimbursed, according to the application, are $433,279 paid to lobbyists and lawyers who flooded City Hall four years ago to win approval of the TIF package.

Overall, the $148 million contributed by the city to build  “horizontal” infrastructure along East Cromwell Street will be matched by $47 million from Goldman Sachs, $37 million in debt financing and $23 million from “Baltimore Revitalization Direct Investor LLC/Managing Member.”

Weller Development and the BDC were asked to identify the principals of the latter entity. Both refused.