An effort by Mayor Stephanie Rawlings-Blake to privatize homeless services in Baltimore was blocked yesterday when an umbrella group of providers voted it down.

The Continuum of Care group, granted authority under a 2008 federal housing law, had assembled at the Helping Up Mission on East Baltimore Street after months of meetings to vote on the idea.

A “yes” vote would mean the issuing of a Request for Proposals (RFP) to hire a private contractor to take over what is now the responsibility of the Mayor’s Office of Human Services – applying for federal grants and overseeing homeless programs.

In the room were officials from the administration who had been encouraging the switch-over, including Deputy Mayor Dawn Kirstaetter, and members of the mayor’s appointed board overseeing her “Journey Home” initiative.

“We need to slow it down and really think more about what it means to privatize public dollars,” said Jacqueline Robarge, founder of Power Inside that helps homeless women.

“It just seems like this is being thrown upon us,” said Darroll Crib, CEO of The Humanitarian, pointing out that the new mayoral administration taking over in December would likely appoint new board advisors.

“Everybody knows there is an election coming up. Why are we in a rush to do an RFP when those that are in here know that there’s not too many entities that could be the applicant?” Crib said. “And right now the city is doing it for free.”

Concurring with Crib’s motion to table the idea, the group voted 38-30 against authorizing the issuance of an RFP.

One group that had written a letter expressing a strong interest in getting the $28 million contract – United Way of Central Maryland – had a representative in the audience yesterday, vice president Charles G. “Chuck” Tildon III.

Tildon, who has served as Rawlings-Blake’s campaign treasurer and is the brother-in-law of City Hall lobbyist Lisa Harris Jones, was seated in the audience beside Sen. Catherine E. Pugh, the Democratic nominee for mayor. 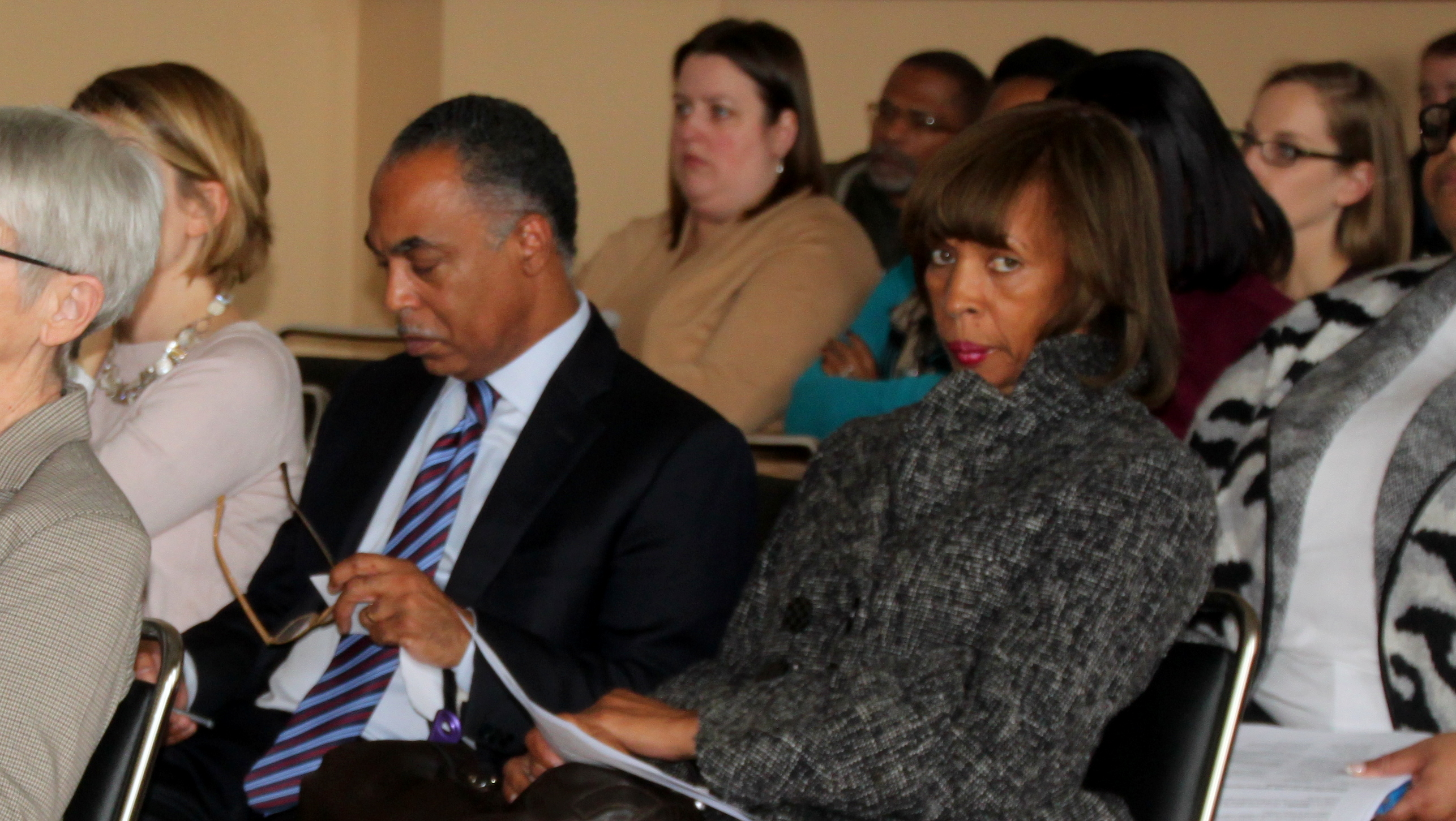 United Way “is well positioned to partner with you in this new construct,” then-CEO Mark S. Furst wrote in an April letter to the mayor’s Continuum of Care board.

Neither Pugh nor Tildon commented on the vote before leaving the meeting.

But some speakers did offer thoughts, including a disappointed Cindy Williams, executive director of Loving Arms, who said challenges remain, regardless of the structure for the government’s response to meeting them.

“The fact that we were in this room and that there is so much passion and conversation about homelessness says that we really are interested in doing something different to end homelessness in our city,” Williams said.

“But at some point we have to begin to trust one another enough to allow those changes to happen,” she said. “I’m praying this isn’t the end of the conversation.”

Trust was clearly an issue underlying yesterday’s vote, as was tension between the providers and the mayor-appointed Continuum of Care board.

Before approving a new Continuum of Care charter, the providers added a provision to ensure that their group – and not the mayor’s board – would have authority to issue an RFP for homeless services management if the matter reappeared in the future.

A speaker at one point asked if the public would have access to financials and other documents if a non-governmental entity were running homeless services.

“No, they would not be subject to Freedom of Information Act because they are a non-profit,” said Antonia K. Fasanelli, executive director of the Homeless Person’s Representation Project. 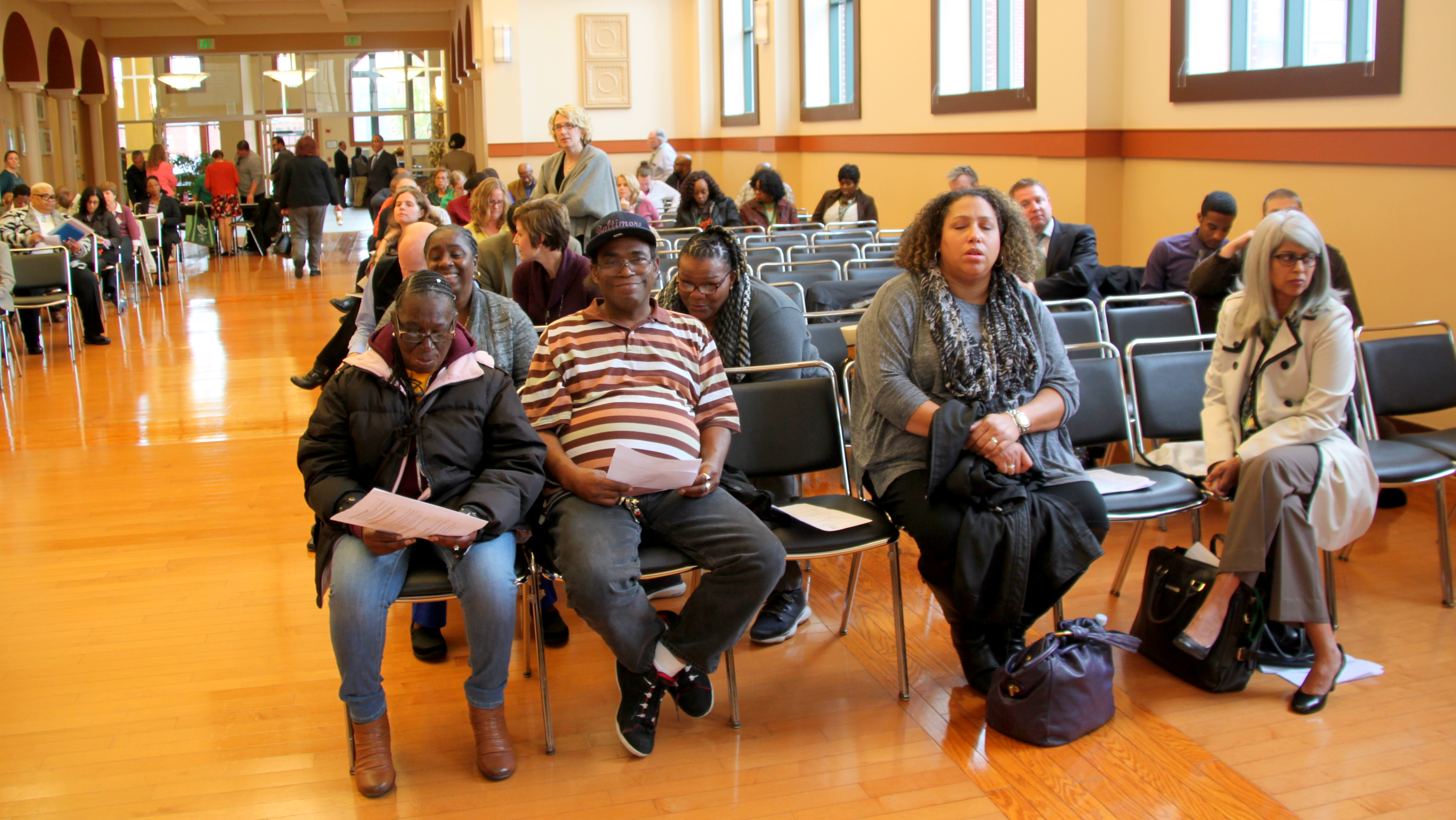 Kirstaetter referenced the trust issue as well in her comments on Rawlings-Blake’s behalf.

“We have worked really hard to address the persistent lack of trust and accountability to a larger community so we can do the important work we all care about – eliminating homelessness in our city,” she said in a statement to The Brew.

Kirstaetter said the mayor was disappointed in the outcome, but was hopeful that the conversation about “alternative homeless service delivery models” would continue in the future.

Rawlings-Blake, she said, had been “eager to learn whether there might be organizations capable of creating a more effective homeless service delivery model, specifically, one that could leverage public resources to raise funds from corporate and philanthropic partners and provide a more nimble system of direct service to improve outcomes for our most vulnerable citizens.”

Meanwhile, amid the discussion of governance, speakers were reminding the audience of the trauma suffered by the thousands in the city and surrounding counties without stable homes.

One speaker noted that data shows a 54% increase since 2007 in the number of people in Maryland who died while homeless. Several said that whatever entity is in charge needs to get people off of sidewalks and out of shelters and into permanent housing.

“Are you going to take people off the street?” asked a member of the advocacy group Housing Our Neighbors. “Or are you going to keep doing what you’ve always been doing?”

“At the end of the day, you’ve still got people sleeping in tents,” said Christina Flowers, of Belvedere Assisted Living, who urged the city to work with faith groups and small homeless services providers like her. 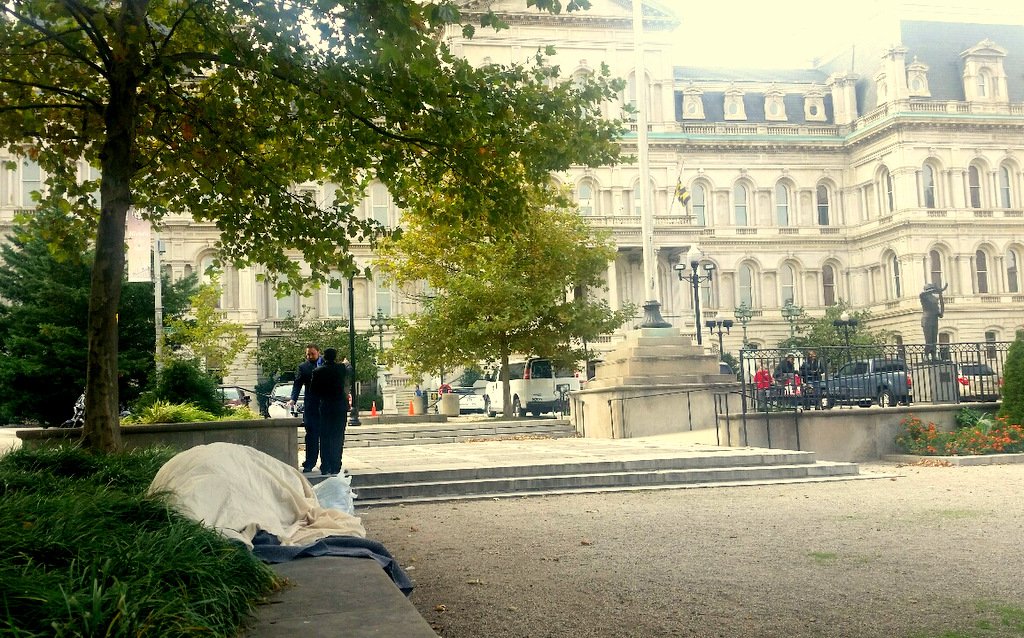 A person sleeps in front of City Hall yesterday, one of several temporary encampments at War Memorial Plaza. (Mark Reutter)

In her brief remarks to the group, Pugh referenced this issue, too.

“We know in Baltimore it’s 3,000 people who are sleeping on the streets each night and probably more,” she said.

Pugh said she agreed with the man asking the city to get people out of tents and shelters and asked if the proposed RFP included a requirement to reduce the ranks of the homeless by moving them to permanent housing and supporting them to remain there.

She was told that a permanent housing provision could be part of an entity’s  response to an RFP.

“Because what we should be doing is figuring our way out of this business,” Pugh said, “as opposed to growing the opportunities for services.”