There was solid applause for incumbent City Council members being sworn in at a ceremony at Baltimore’s War Memorial Building today, but for the eight brand-new members there was something different:

Enthusiastic clapping, whoops and cheers greeted the seven men and one woman who were part of the biggest change election that the 15-member body has seen in many years.

“Yes! Yes! Go Shannon!” people yelled, as Shannon Sneed stepped to the front of the stage to sign the book and be formally recognized as the new representative of the 13th District.

Sneed’s story was especially dramatic. She won her seat representing her struggling East Baltimore district this year after a close race in 2011, then losing to incumbent Warren Branch by 43 votes.

“People knew we wouldn’t give up,” Sneed said after the ceremony. “And they’re excited now. They know we’re going to really try and make a difference on jobs and workforce development. On all the things we heard about from them when we knocked on their doors.” 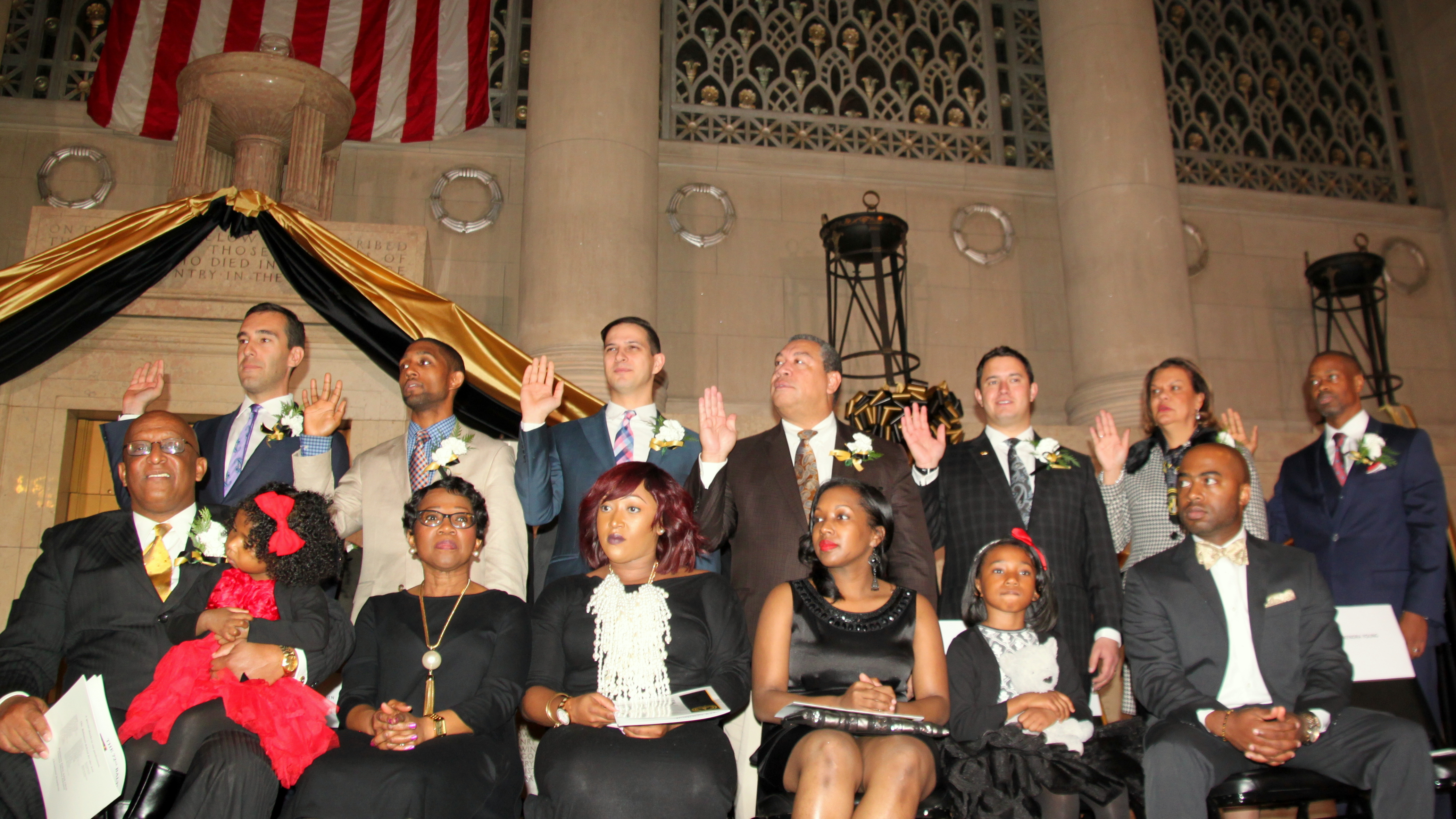 Some of the 15 Council members sworn in at today’s ceremony in the War Memorial Building. (Fern Shen)

Sneed was just one of the newcomers who had made a splash by unseating or replacing entrenched incumbents, including several from political families such as Branch or the 3rd District’s Robert Curran or the 9th District’s William A. “Pete” Welch.

Amid the pomp and pageantry of the morning ceremony, several other freshman lawmakers were, like her, in a mood to hark back to their grassroots beginnings.

“Last time you saw me, I was raising hell about a shopping center,” cracked Councilman Kristerfer Burnett, of the 8th District, a community organizer whose causes included fighting blight and crime at the Edmondson Village Shopping Center.

Meanwhile, the body’s ranking incumbent, City Council President Bernard C. “Jack” Young, had some new strategies of his own to present in his remarks to the standing-room-only crowd.

He cited Belair-Edison Neighborhoods Inc. that, he said, is “partnering with local government to take a holistic approach to improving public safety.” Another partnership involves coordinating with Humanim’s efforts to demolish vacant houses to eliminate blight and create jobs.

“Since its population peaked in the 1950s, Baltimore has lost about 350,000 residents,” Young said. “We’ll need to increase our demolition efforts in order to right-size our housing supply.”

He also mentioned St. Ambrose Housing Aid Center that “plans to work with Mayor Pugh and the Department of Housing to develop a system to help better evaluate non-profit developers.” 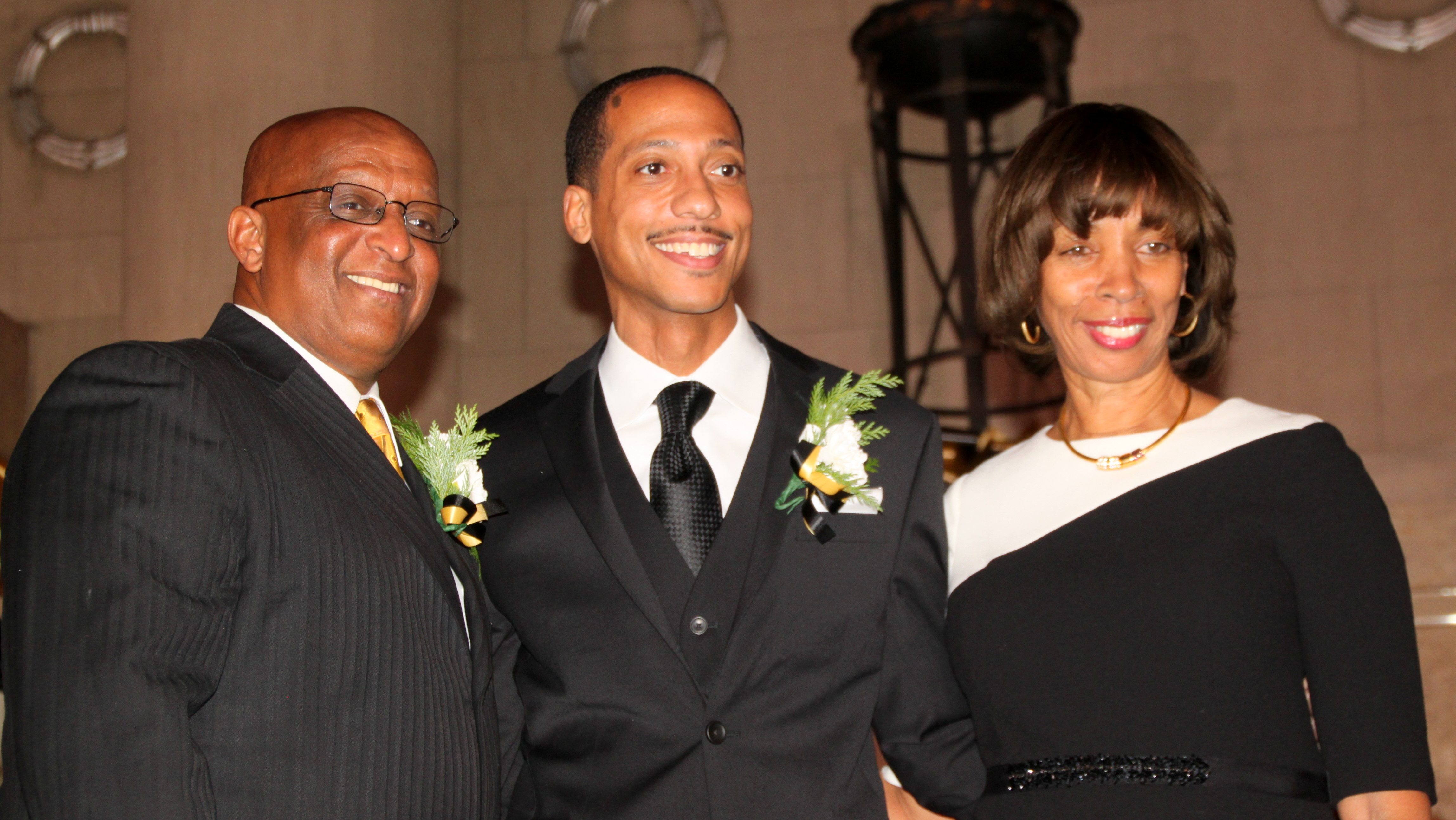 “We would like to cut the red tape and create a pre-clearance screening process that helps non-profit developers scale up their work in a manageable way,” Young said, departing from prepared remarks by repeating “cut the red tape” three times.

Young did not specify what the Council’s role would be in this process or how it relates to Gov. Larry Hogan’s announced plan to use state funds to help demolish vacants in Baltimore.

Moving over to City Hall at 5 p.m., the 72nd City Council held its first meeting by taking care of some business at the start of the new legislative year.

Middleton made an announcement on behalf the Democratic Central Committee, noting that the committee is accepting applications until December 22 for candidates who would like to be named to fill Del. Barbara A. Robinson’s 40th District seat. 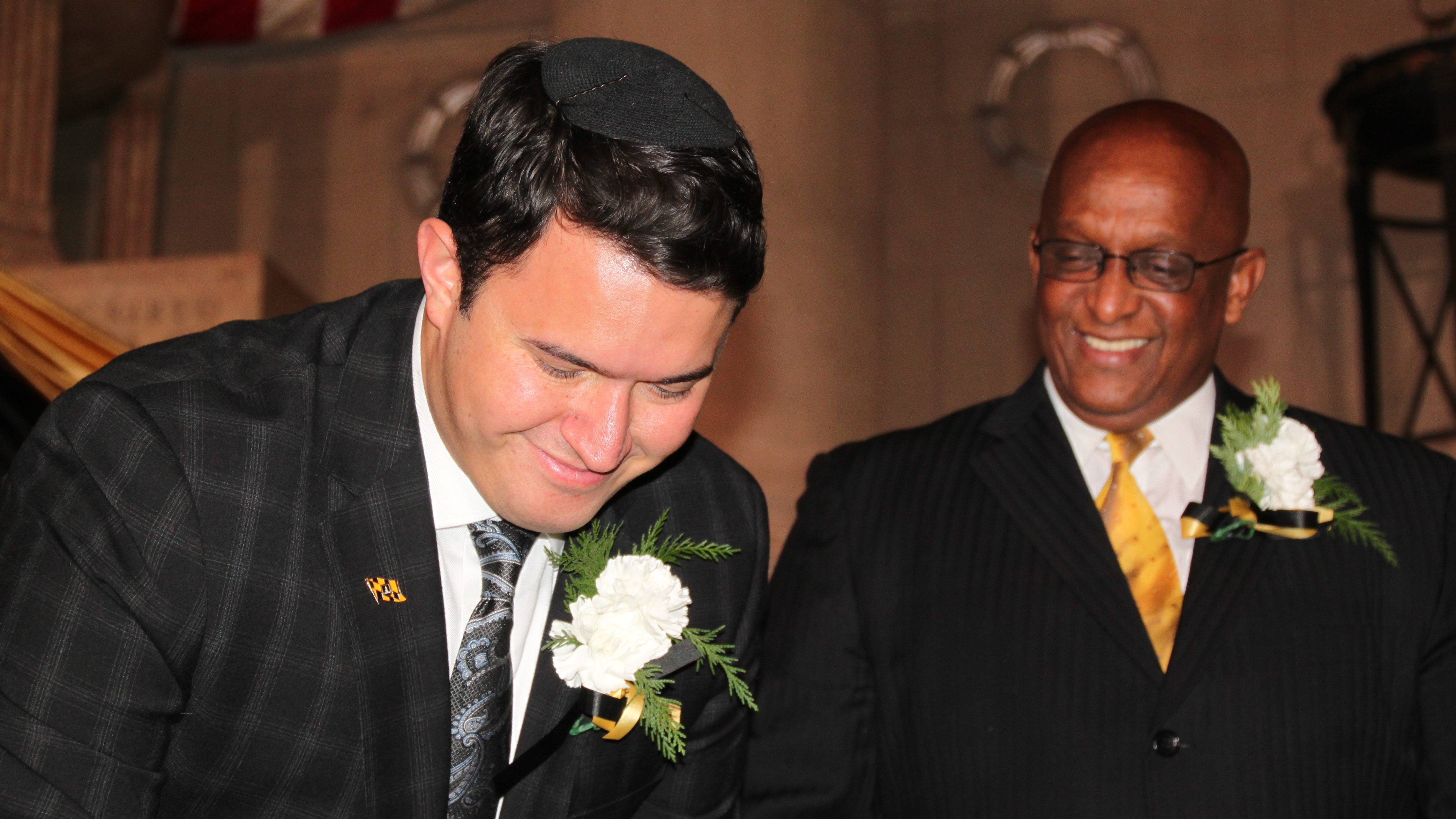 (The committee last night recommended Robinson to fill the Senate seat vacated by Catherine Pugh when she was sworn in yesterday as mayor.)

Another housekeeping part of the agenda was committee announcements. Councilman Zeke Cohen, 1st District, announced a January 5 Education and Youth hearing to set priorities for the city’s schools and children. (He’s the new chairman of the Education and Youth Committee.)

As for legislation, only one measure was approved: freshman Councilman Ryan Dorsey, 3rd District, brought national politics into the chamber with a resolution to condemn President-elect Donald Trump.

“For the purpose of opposing and condemning divisive and scapegoating rhetoric, rooted in hate and prejudice, and used, approved of, or encouraged by President-elect Donald Trump targeting historically disenfranchised, marginalized, and oppressed groups.”

Earlier in the day, Charlene Cowan, who chairs the city Republican Central Committee, fired off a response calling Dorsey’s resolution “bombast,” contrasting his effort with the inaugural remarks by Mayor Pugh, who said she would like to go with Hogan to Washington to ask Trump for infrastructure funding.

“Pushback! We ain’t going to do it that way. We’ll do it with respect, justice, fairness and balance,” Clarke said. “The cities of this country will follow Baltimore’s lead.”

The motion was passed by the all-Democratic Party body without dissent.