Homeless advocate Christina Flowers had been attending a foundation-sponsored “Solutions Summit” in Baltimore’s War Memorial building yesterday when she heard the news:

Lawrence Alexander, a man she knew who has been sleeping on the ground in front of City Hall next to the Fayette Street bus bench had been found dead there in the morning.

By the time she got to that side of War Memorial Plaza, his body was gone.

Police told her it had been transported to the medical examiner’s office for autopsy. The temperatures Friday night had dropped to about 29 degrees.

Today Flowers brought some fellow advocates to the spot to create a balloon-and-stuffed-animal memorial for Alexander, who was 54-years-old and reportedly had difficulties with hearing and speech.

“He called me his flower. He would give me a kiss on the cheek,” said Flowers, founder of Belvedere Assisted Living, who provided housing for Alexander off and on. 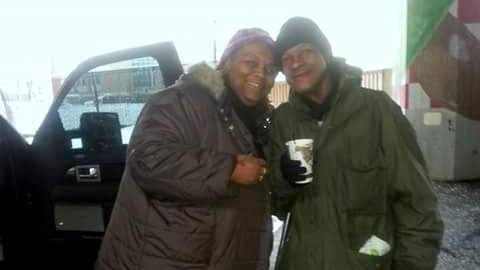 A photo of Lawrence Alexander, who died Saturday on the ground outside of City Hall. (Christina Flowers)

“He gave me a shirt,” said a man who identified himself as Woody.

He said he had been with Alexander at one of Flowers’ housing units. “He should have had better help.”

That was the message Flowers had for city officials and Baltimore’s new mayor, Catherine Pugh, sworn in last week.

“We’ve got to  do better. This man lay there dead right in front of City Hall for four hours,” said Flowers,  who said she spoke with the man who found him.

“We need Mayor Pugh to declare a state of emergency.”

Need to Hear from the Mayor

Police were alerted at about 8:30 a.m. “by a citizen that was unable to wake Mr. Alexander,” according to Police spokeswoman Nicole Monroe.

Officers had found Alexander unresponsive and medics pronounced him dead, she said.

Monroe said homeless advocates who spoke to detectives “were extremely helpful filling in some of the blanks. . . but were unaware of any family” to contact.

Flowers, meanwhile, said she is hoping Alexander’s death serves as a wake-up call to city officials that Baltimore residents who are homeless are in desperate need of more help from the city.

“Give me a bus! Let me pick people up and get them to the providers. I know there are places for people,” Flowers said.

“They need to hear it from the mayor: ‘I want you to get these people in out of the cold!’”

Flowers said after she tweeted a photo of Alexander last night, she got a phone call from Pugh herself.

“It was encouraging, hearing from her,” Flowers said, noting that Pugh has brought up the issue of homelessness publicly on multiple occasions. “Now it’s a question of what will she really do.” 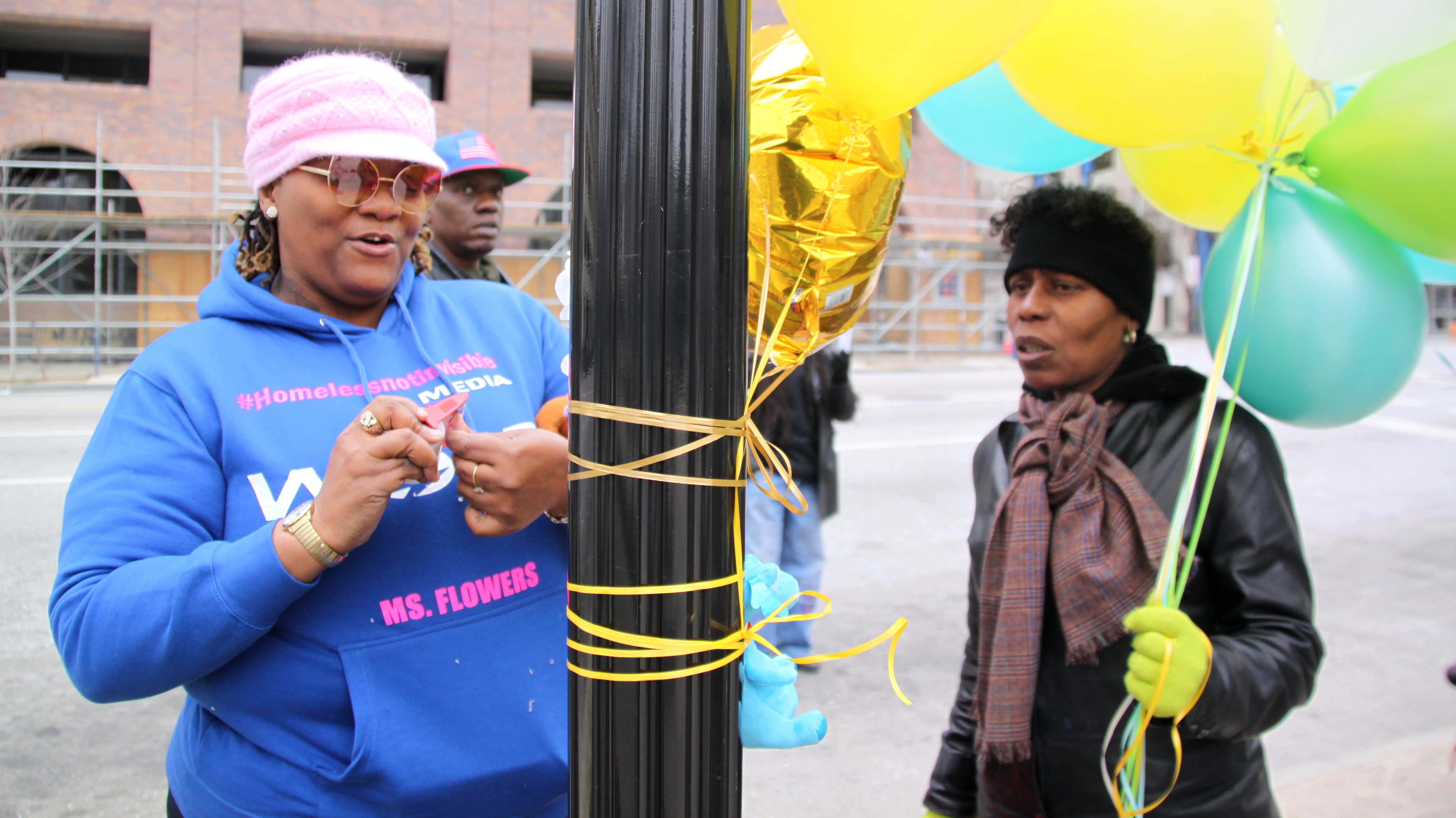 Activist Kim Trueheart said she came to know Alexander as “a gentle soul.”

The quiet man who spent many hours on the bus bench “would give me a hug,” Trueheart said. Community activist Duane “Shorty” Davis said Alexander often showed up at his free food events.

Pugh scored points with homeless advocates last month by agreeing with them that the city should seek to reduce the ranks of the homeless by moving people to permanent housing.

“Pugh has said it’s a priority of hers,” Trueheart said. “Now she’s in charge. And she can’t let this happen under her nose.”

____________________________
UPDATE – Mayor Pugh Responds, sending the following statement to The Brew:
“I extend my deepest sympathy to all who knew and were associated with Lawrence Alexander, who passed away this weekend due to exposure to the elements. Today I learned that our Winter Shelter Plan is in place and, although I am still gathering information about the terrible death of Mr. Alexander, my priority to ensure the City is doing all that it can to accommodate anyone who needs shelter and that no one falls through the cracks.”
____________________________

Another advocate, not present at the vigil for Alexander but reached earlier by The Brew, said she also has been heartened to hear Pugh speak up about permanent housing for the homeless.

“It is a good jumping off point to urge her to create a locally funded voucher program to house homeless persons – something that wouldn’t be subject to the whims of the federal government,” said Antonia K. Fasanelli, executive director of the Homeless Persons Representation Project.

Washington, D.C., has had such a program, called the Rent Supplement Program, for years, Fasanelli told The Brew.

Data shows a 54% increase in the number of deaths among homeless people in Maryland since 2007. (A graphic on page 4 of the report summarizes the data.)

But Fasanelli said a much more immediate need is for the city to adjust its winter shelter plan.

According to an October email sent to providers from the Mayor’s Office of Human Services, the current policy is: below 32 degrees they open 100 more “Winter Shelter” shelter beds and only if the temperature reaches 13 degrees do they add 100 additional “Code Blue” beds for a total of 200 beds.

“We need to have all services at 32 degrees and above,” she said. “This splitting of hairs over temperature is absurd and indeed, potentially fatal.”

Another housing advocate, reacting on Facebook to Lawrence’s death, put it this way.

“This is preventable. The city needs to open a shelter, late fall to early spring, period,” she said, calling Alexander’s death on the sidewalk “extremely sad.”

Fasanelli pointed to information from the National Coalition for the Homeless that shows why hypothermia can set in even above 32 degrees – and even at 50 degrees.

Also provided by the coalition is a graphic comparing various U.S. cities’ cutoffs triggering extra help for the homeless.

“It shows that Baltimore has the coldest and harshest cut-off,” she said. 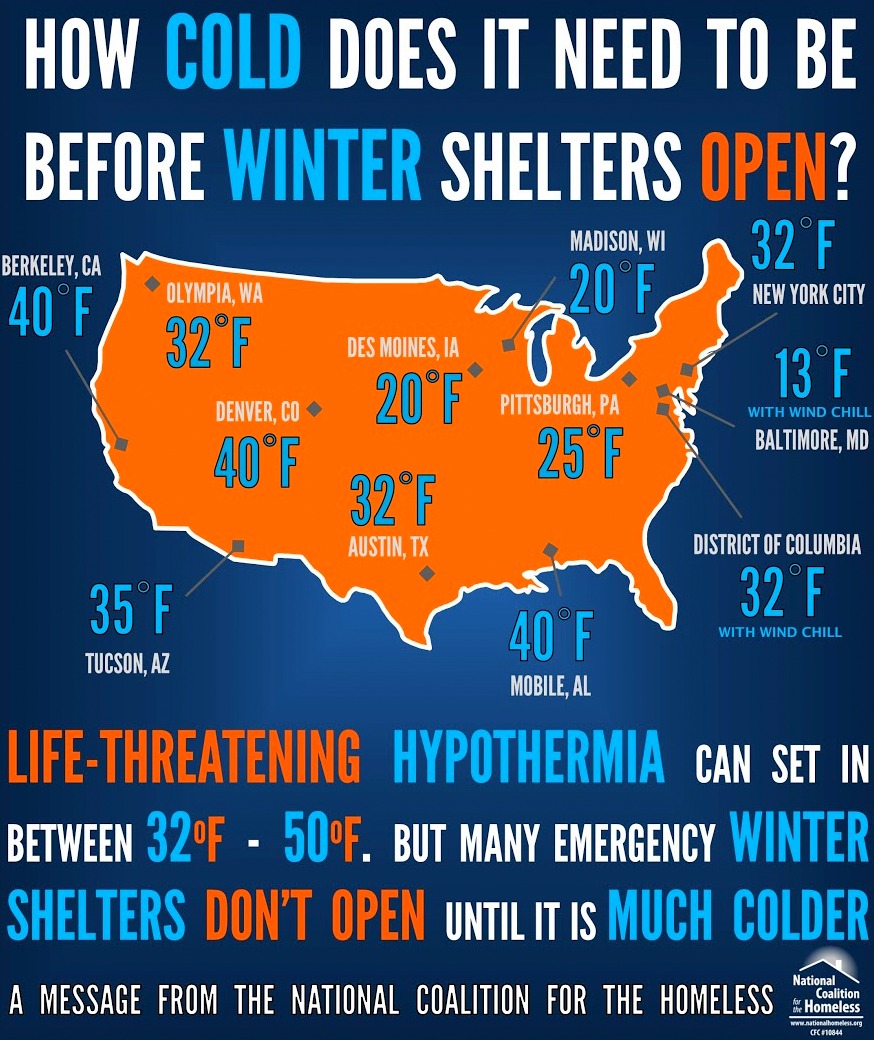 (National Coalition for the Homeless)

“I Lost my Place”

Two homeless men who joined a prayer circle for Alexander didn’t need graphics or data to validate that nights have been cold and sleeping outside has been miserable.

Dirton, said he became homeless a year ago after his job as an appliance repairman working on contract for Sears didn’t pay enough.

Dirton said he would like to get help finding permanent housing but doesn’t know how to get on the list.

He makes use of the city shelters but says they are dirty and dangerous, with drug deals, fights and other illegal activity taking place.

A onetime “trash man” for a private company, Dirton has applied for a similar job with the Department of Public Works, but he hasn’t heard back. 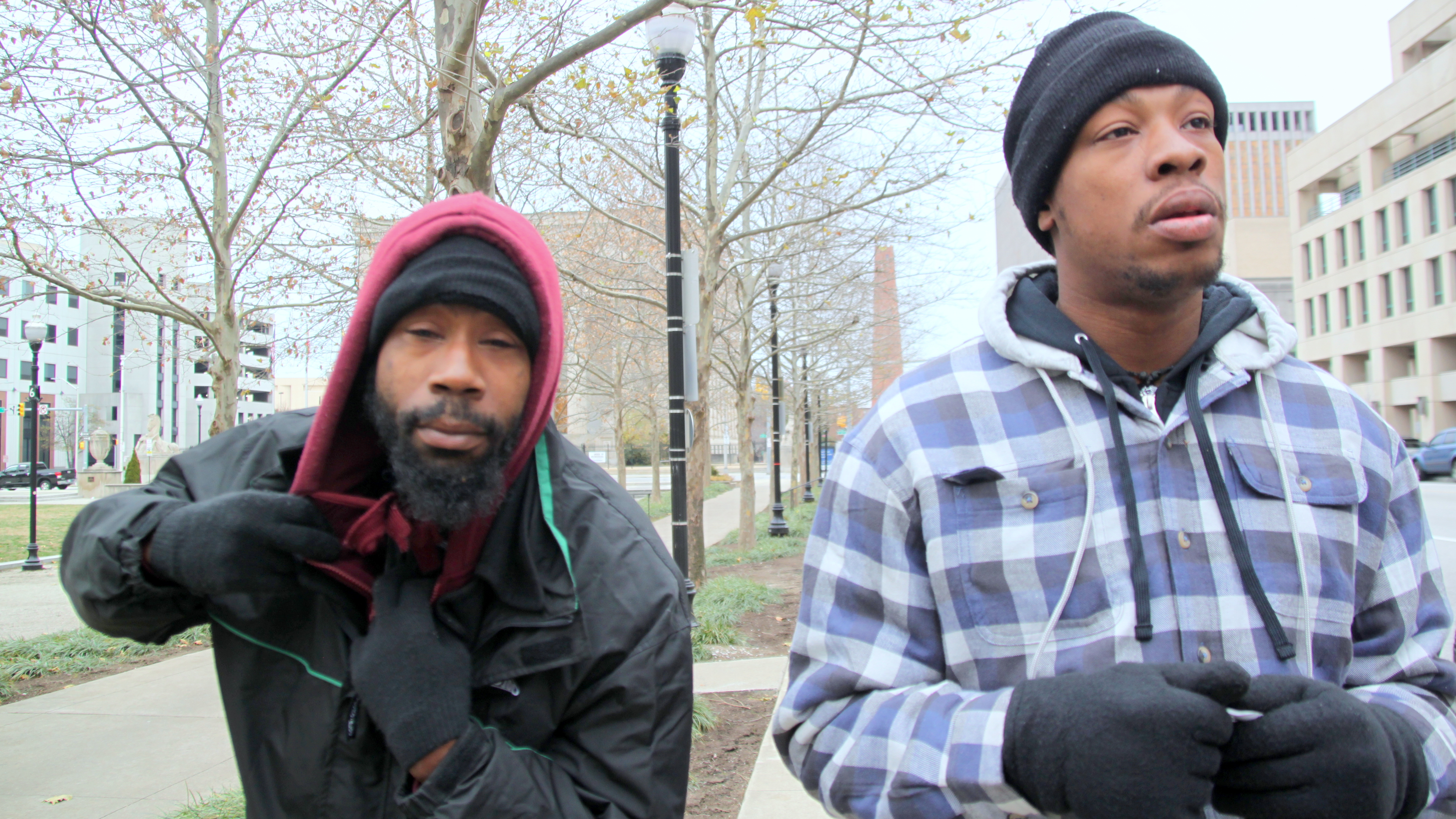 Marquez Eaton, 27, told a similar story and pointed to the various places he has slept downtown – all within a block of City Hall.

“Under the bridge there,” he said pointing to the Jones Falls Expressway. “Over by the church,” he said, pointing to Zion Lutheran Church.

MORE COVERAGE:
Is Baltimore prepared to handle the homeless this winter?