How do the people living in tents that dot median strips and highway shoulders in Baltimore stay warm, especially when the mercury drops into the teens with strong winds?

Davion Benezkiel, who has been living in one near the Jones Falls Expressway since July, clicked the small lock on his green tent’s zipper, stood up and answered that question with fervor this afternoon:

“It’s hard!” the 26-year-old declared, one eye tearing as he spoke.

“What I do is sleep on top of blankets folded up. I have three of them. And then I have two more on top of me.  It takes about a half-hour to get warm.”

Benezkiel has tried the shelters, but finds them dangerous and dirty. “There are people who are not very clean, people with bedbugs,” he said. So prefers his tent, one of about a dozen propped up against a low wall along Guilford Avenue.

Benezkiel said he is on a waiting list to get a housing voucher and would like to get back on his feet and find work.

Until then, he sleeps in his tent, including tonight with its expected wind-chill temperature of about 10 degrees.

Has he ever been approached by anybody from the city?

“No, not in all the time I’ve been here,” he said. “I wish somebody from the city would come with vouchers for us.”

Meanwhile, four blocks away at Our Daily Bread, a soup kitchen and employment center, the city’s Journey Home board heard about the city’s halting progress in addressing homelessness.

The discussion was prompted by the grim story of Lawrence Alexander, a 54-year-old homeless man found dead in front of City Hall last Saturday morning. (The mayor’s office has described his death, without further detail, as a result of “exposure.”)

• Is Baltimore prepared to handle the homeless this winter?

Appointed acting director of homeless services by Mayor Catherine Pugh, Hickey said 275 extra beds have been activated to handle the expected surge in homeless persons tonight and over the weekend.

He said a new facility was opened last night on West Cold Spring Lane in the Dolfield neighborhood. In addition, the city’s main shelter, the Weinberg Housing Resource Center at 620 Fallsway, will accept clients until 10 p.m.

Homeless families can find beds at two private shelters – Sarah’s Hope on North Mount Street and the Salvation Army’s Booth House on Light Street. Overflow shelter space has been made available to women at the Mary Elizabeth Lange Center at 601 East Chase Street.

“If somebody comes to us, nobody will be turned away,” Hickey vowed, saying that the new mayor and her top staff have devoted much of the week looking into the homeless problem.

But he acknowledged a major problem – the lack of outreach workers serving the homeless. “Shelters don’t do much good if people are out in the streets,” he pointed out.

Outreach Efforts Cut in Half

After the meeting, sources told The Brew that, citywide, there are only seven outreach workers serving a homeless population of more than 3,000. This compares to roughly 14 workers last winter.

A major reason for the dearth of staff, Hickey said, was funding reductions by the U.S. Department of Housing and Urban Affairs, which is de-emphasizing shelters and encouraging cities to find ways to permanently house the homeless. 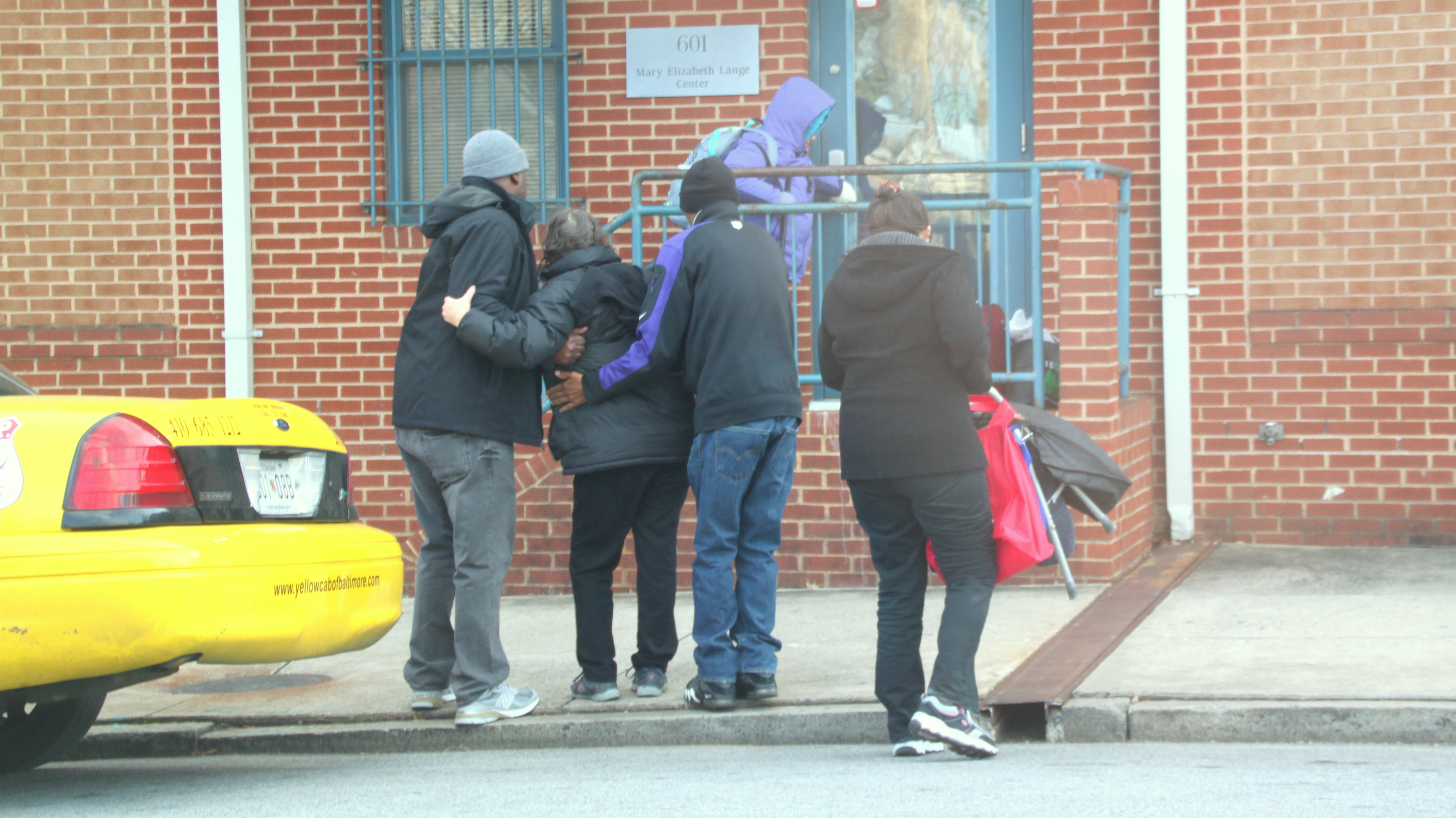 A woman is helped into overflow shelter space today at the Mary Elizabeth Lange Building in East Baltimore. (Fern Shen)

Currently, HealthCare Access Maryland, People Encouraging People and Health Care for the Homeless are contracted by the city to help the homeless access benefits, such as disability pay and Social Security, and encourage them to leave homeless encampments. The Police Department has also established a small unit dubbed “HOT” (for Homeless Outreach Team).

No Transport for Wheelchairs

But various barriers remain. HealthCare Access, for example, does not have a vehicle to transport the homeless in wheelchairs to shelters. CEO Traci Kodeck said the group has been waiting for such equipment for about a year and hopes to have it in January.

While this declaration activates fire, housing and other departments to take certain preventative measures, the Health Department does not perform any direct outreach for the homeless, spokesman Sean Naron said.

“No, we are not having a staff person go door-to-door and knock on 20,000 doors,” Naron said. “If you have questions about the homeless, you go to the homeless services administration in the Mayor’s Office of Human Services. Got it? Thank you,” he said.