Supporters mourned and critics cheered last month when Arsh Mirmiran, the principal of the Caves Valley Partners group undertaking a controversial overhaul of Cross Street Market, announced he was walking away from the deal.

Then last week both sides got fired up after news broke that the developer never signed the termination agreement, drawn up by the city and set to take effect on March 1.

Now it looks like the dreamed of – or dreaded – reversal is materializing:

Mirmiran announced this afternoon that Caves Valley Partners had received so many messages of encouragement that he is moving ahead with the deal.

“We reconsidered the decision to abandon the pursuit of the project and are exploring scenarios under which it could move forward,” the company wrote in an email sent to merchants.

“After considering thoughtful objections to our proposed redevelopment plan and careful analysis, we are proposing a revised plan that we believe will address the primary areas of concern,” the email said. “We are confident a compromise solution can be reached that meets the needs of the greatest number of stakeholders. ”

Earlier in the day, Mayor Catherine Pugh’s office confirmed that the project to upgrade the city-owned market and place it under the private management of Caves Valley subsidiary is moving forward.

Pugh’s communications director, Anthony McCarthy, hastened to add that the discussions were not taking place with “the city,” but with the quasi-public entity that runs city’s markets, the Baltimore Public Markets Corporation (BPMC).

Nomenclature aside, discussions about how the Towson-based developer might resume renovating the Federal Hill landmark have been quietly progressing.

Caves Valley’s statement includes multiple details about what the company is offering the current market vendors in its second proposal:

“a) Construction Shutdown: There was widespread anxiety that a temporary shutdown to reconfigure the Market would not allow merchants to survive, even with proposed mitigation measures. We are confident we can still create Baltimore’s best market using a simplified layout that phases in more limited upgrades and allows current merchants to continuously operate.

“(b) Phased Rent Increases: Many merchants feared increased rents wouldn’t allow them to succeed, even with more business. CVP had started making offers to certain merchants for a risk-free phase-in to higher rents to prove the viability. However, due to financial constraints, we couldn’t make such offers to most merchants.

“In an effort to temper rent increases necessary with a major investment, CVP has requested that the State Delegation consider funding dedicated to merchant space improvements and the Delegation is graciously exploring this possibility. The more funding that can be provided to merchants, the greater the number of merchants that can be provided trial rents and the longer the possible duration of the transitional periods.”

“(2) Market Liquor License: CVP has agreed from day one that reasonable safeguards are needed to protect the community from the possibility of the Market becoming an alcohol-dominated facility, while at the same time being able to create a proper market experience. CVP always proposed a limited liquor license for the Market with restrictions on the size and number of vendors selling alcohol. Under this license, alcohol could only be sold by a restricted number of Market vendors, but it could be carried to the shared seating within the area of the Market. The proposed license would also impose the most stringent food sales ratio in the State, insuring that food, not beverage, would be the primary focus of the new Market.

“(3) Nick’s Inner Harbor Seafood: CVP had designed the Market to include Nick’s and is open to retaining Nick’s in the Market, if its owners are willing to engage in serious discussions regarding improvements to the physical condition of their space, collaboration with other Market merchants, and the quality and cleanliness of their operations.

City officials, meanwhile, were saying little today about their role in the discussions. McCarthy referred a reporter to BPMC’s Board Chairman (and Downtown Partnership president) Kirby Fowler.

Fowler asked his spokesman at the partnership, Mike Evitts, to send the reporter’s query to Robert Thomas, BPMC executive director. To which Thomas, via text, told the reporter he had “nothing to update.”

“There is no negotiation to which I am a party,” Thomas said.

But Thomas did note that the market project is still alive for CSM, LLC, the entity set up by Caves Valley Partners to manage the Cross Street under the agreement that was published on the project’s website.

“CSM is determining internally if, when and how they will re-engage this project,” Thomas said.

But not all the developer’s deliberations have been taking place internally.

“Caves Valley asked to meet with the Delegation after leaving the deal to discuss the multiple factors and structural problems that led them to conclude that their project as currently conceived wouldn’t work,” Clippinger said in an email to The Brew.

“We continue to be open to proposals or plans that revitalize the market and respect and balance the many interests that impact this community asset,” the statement continued. “If the current operator offers a revised proposal that better meets the goals of all stakeholders, we, of course, would consider it.”

Clippinger and 46th District Senator Bill Ferguson had crafted legislation to create a special liquor license for the market after meeting with community members, who were concerned that a license might exacerbate what many say is a problem of too many bars in Federal Hill.

After Miramin announced he was terminating the deal, the delegation submitted bills that excluded Cross Street Market, but left in provisions to allow licenses to be created for two other projects: Port Covington and Anthem House in Locust Point.

Clippinger said he has heard from some of the people who are hoping to keep the $6.5 million market overhaul by Caves Valley alive.  A change.org page “Redevelop Cross Street Market Now” sprang up and now has over 400 online signatures.

“We need a new mkt. old one is disgusting,” one signer them wrote. “It’s a new age. time for south Baltimore to accept a new paradigm.”

“Keep it up and maybe our state delegates will reconsider,” one of the petition organizers wrote.

Meanwhile, critics of Caves Valley have their own online petition, focusing on the treatment of existing merchants and warning that any liquor license would likely worsen neighborhood problems with rowdy bar patrons.

“Ive been going to cross street market since i was 3 years old (im27) to eat sushi softshelled crab sandwhiches and bruce lees wings. PLEASE DO NOT RUIN THE MARKET,” one signer wrote.

“Rebuild the building, update it, but do not corrupt the market with a absentee owner who will bring bad business and crappy service that will cause others to lose out,” wrote another.

Speaking at the Board of Estimates’ pre-meeting today (3/26/17), the attorney for most of the current market vendors, John C. Murphy, asked that Caves’ Valley’s agreement with the BPMC be rescinded.

“Now there’s been a big change. We have no certainty,” Murphy said. “If there’s to be a new agreement that specifies the rights of the merchants it can go back before the Board of Estimates.”

City Council President Bernard C. “Jack” Young said he did not know anything about the developer’s return to the table (“Just like you, I read it in the paper”) and that the Board could consider any new agreement that comes before them.

“I don’t think they’re going to bring it to the board, that’s the problem,” Murphy responded. “It was approved once – they’re just going to go ahead with that approval.”

The agreement, approved in November in the waning days of the Rawlings-Blake administration, had a number of unusual provisions, including locking in the developer’s monthly lease payments at $10,000 for the next 50 years.

Murphy’s clients complained that Caves Valley’s decision to close the market for 10 months during renovations, along with its refusal to pay moving and relocation expenses, represented an effort to push them out. 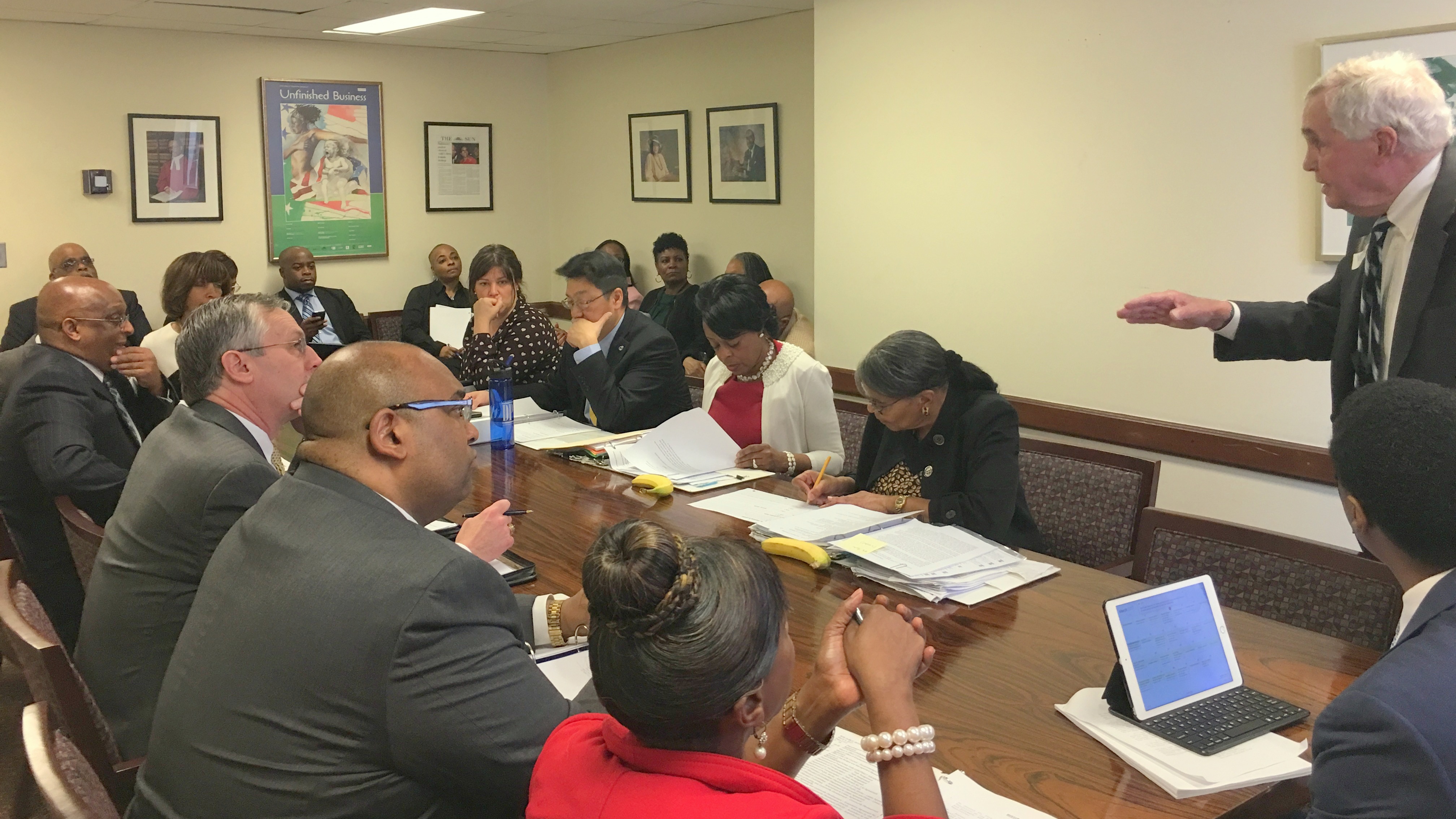 Although all five members of the spending board were present, Murphy addressed his plea directly to Pugh.

“Give us some help, you’re the only person who can help us,” he said to her.

But the Administration’s reply came from the person sitting at the other end of the conference table, Interim City Solicitor David Ralph.