Maybe it was back in April 2010 when Baltimore’s new mayor, Stephanie Rawlings-Blake, allowed the Police Department to curtail its Comstat meetings where police brass and city aides sometimes butted heads over departmental overtime.

Or maybe it was when City Hall’s overtime “hawk,” Christopher Thomaskutty, resigned as deputy mayor.

Or perhaps the trend really got underway when Police Commissioner Frederick H. Bealefeld III and his well-regarded deputy, Anthony Barksdale, left the department in 2012.

Whatever its origins and exact history, the explosion of overtime costs at the BPD has come to haunt Catherine Pugh’s young administration in the wake of a federal indictment that vividly describes alleged overtime abuses by the elite Gun Trace Task Force.

The March 1 felony charges against six detectives and one sergeant, who the indictment portrays as creating their own mini-crime wave, are part of a still broader context where overtime costs and homicides have both shot up to record highs.

Not so long ago, police officers were not pocketing $100,000 or more in overtime, as reported last week in The Brew.

Nor was City Hall faced with $27 million in un-budgeted police “overruns” beyond the $16 million that was set aside to cover expected overtime, including for police presence at city festivals and sports events like Ravens and Orioles games.

Placing accountability on runaway overtime – which appears to have little correlation to arrests made and homicides solved (see chart near the end of this story) – might help the new administration make Baltimore not just safer, but better in ways that citizens want.

A more efficient BPD , for example, could help free up dollars for city school teachers now threatened with widespread layoffs.

Eight years ago, former Mayor Sheila Dixon did slash BPD overtime without causing a rash of crime. In fact, homicides dropped to near 30 year lows.

Last year, Dixon tried to reclaim her old job by running on a platform of reducing crime and cutting excessive overtime, narrowly losing to Catherine Pugh in the Democratic primary.

Her overtime record stands as the best showing of Baltimore’s last three mayors. So we asked her what she thinks is needed today.

Skip the tedious business of auditing overtime, as proposed by Mayor Pugh, and get back to the basics, Dixon advised. 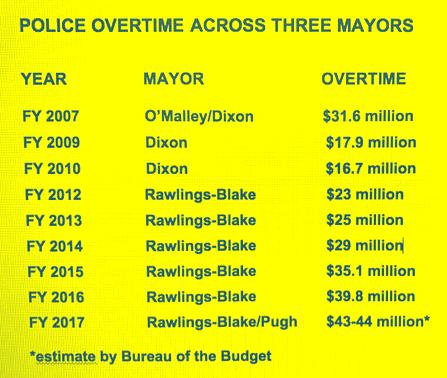 But O’Malley also devised a set of statistical tools known as Comstat, based on New York police practices, to analyze BPD performance across many dimensions, including overtime.

Led by Thomaskutty and now-40th District Delegate Antonio Hayes, Dixon’s staff used the stats to drill down on overtime at regular meetings held with police brass over costs.

“They Knew We Were Monitoring Them”

“We did weekly assessments of everybody’s overtime. If overtime increased, the command staff were invited to Comstat [meetings] to justify their overtime, strictly overtime,” Dixon said.

“At the district level, I had all the supervisors justify overtime spending daily. That added a lot of discipline. The police commissioner knew, the command staff knew, we were monitoring them. People just couldn’t do overtime to do overtime.”

Tracking overtime had benefits in addition to reducing costs, according to Dixon. It allowed the police and her staff to pinpoint in “real time” emerging public safety issues, such as a crime spike in a particular neighborhood or slow police response times.

“It wasn’t the overtime per se that concerned me. It was this: is the overtime reducing crime? If there was a shortage [of officers] in a district, we wanted to know why. Maybe we got to stick with it [more overtime] for awhile. But maybe there was another answer.

“We created a management system where we had checks and balances in place,” she continued. “It didn’t matter who the commissioner is or the sergeants and lieutenants are. You had a process in place.

“But now,” she lamented, “there’s no system in place. Nobody is watching the storefront. People are doing what they want to do.” 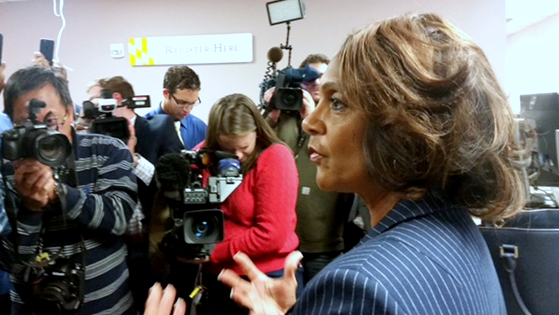 After Dixon resigned after being convicted on a misdemeanor theft charge, Mayor Stephanie Rawlings-Blake announced that she was committed to “increased use of technology” and “new ways to enhance accountability” in the police force.

In April 2010, the police suspended regular Comstat meetings, much to the relief of the then-president of the Fraternal Order of Police, who complained to The Baltimore Sun that the meetings resembled a “beat-down session.”

The issue of excessive or unwarranted overtime faded from view.

Batts hired a longtime friend, ex-LAPD Commissioner William J. Bratton, to do an assessment of the police department. Bratton made $560-an-hour under the contract approved by Rawlings-Blake and the Board of Estimates, while the consulting firm he headed took in another $231,000.

The report the consultants produced contained plenty of criticism about BPD practices and poor community relations. There was even this startling statistic – up to 40% of the posts on each shift was staffed on overtime.

But, as The Brew wrote back then, the mayor and commissioner sugarcoated the findings by announcing a five-year plan that, they said, would cut crime, improve police services, increase efficiency and redouble community engagement. 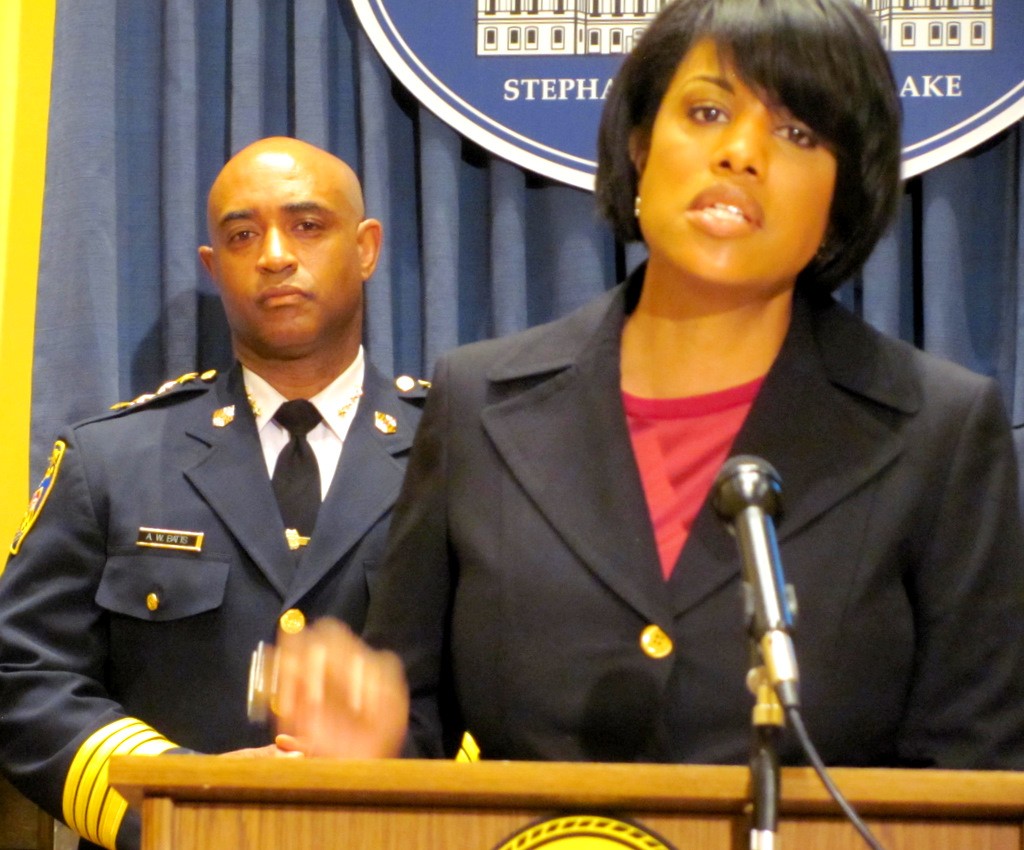 Head in the Sand?

By that time (late 2013), the monitoring of overtime by the mayor’s office had gone by the wayside.

A person with direct knowledge, who asked for anonymity, recounted the mindset at City Hall this way:

“Overtime abuse was not a secret. Especially because it was mainly the same officers getting consistently ridiculous amounts of overtime. But the decision makers at City Hall didn’t spend enough time to get to know how the system was being abused.

“The really pernicious way overtime works,” the source continued, “is that there is so much downtime in policing, if you just stick around, you can claim enormous amounts of overtime without actually doing any work. And the culture of the organization, even among those who don’t abuse overtime, is not to cross the blue line and become a ‘snitch’. ”

Whenever the question of police overtime was raised at City Hall, mostly at City Council budget hearings, Batts and the mayor’s budget team downplayed the issue. They argued that staff shortages accounted for the bulk of overtime.

In the process, they revealed a method of shrouding overtime and other costs through “funded vacancies.” This entailed budgeting money to vacant positions that were not expected to be filled, then using the money accumulated in the empty positions to offset over-spending elsewhere.

Batts promised that overtime would start declining once a new contract was signed with the Fraternal Order of Police Lodge 3. The 2014 contract was designed, he said, to boost police base pay by 13%, but would lower overtime costs through more flexible scheduling.

Instead, unbudgeted overtime steadily mounted in the months preceding the April 2015 protest marches and night of rioting that followed the death in police custody of Freddie Gray. 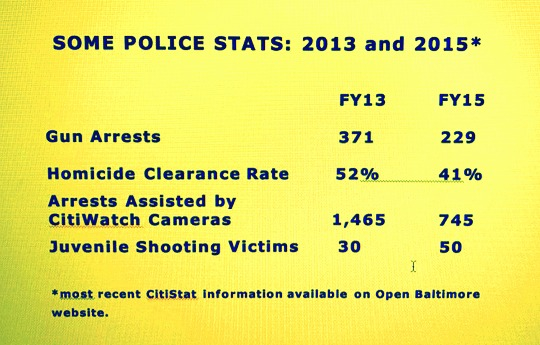 Asked last week to explain the record $39.8 million in overtime paid in fiscal 2016 (the latest period where public information is available), BPD spokesman T.J. Smith cited the Freddie Gray trials, a historic spike in crime and a historic snowstorm.

Here’s how he put it it in an email, responding to our story about officers receive more pay than the mayor:

“One thing of note for FY16 covering the period of July 1, 2015- June 30, 2016 is that encompassed all of the trials that occurred for the six officers. It also encompassed the protests and hearings surrounding the trials. In addition, we were in the midst of the historic spike in crime. In January of 2016, we were buried under an historic amount of snow. This was further complicated by the shift schedule and staffing needs,” Smith wrote.

Who Will Police the Police?

Smith declined to provide specific information about the officers who collected as much as $141,000 in overtime in 2016.

He instead noted, “We will be conducting full reviews, inspections, and forthcoming audits of overtime practices and procedures. There are policies in place, but clearly there is a need to address this in a different way.”

Smith described those “policies in place” as weekly tracking of overtime by each section commander, a procedure that had been used by Bealefeld and Barksdale in the Dixon era, but apparently abandoned by Batts.

Whether Mayor Pugh will now seek methods and means to actively monitor police overtime – or leave it in the hands of the BPD and an occasional auditor – is anyone’s guess.

Following the storm of bad publicity surrounding the March 1 gun task force indictments, Pugh announced to The Baltimore Sun that she is working on a plan and should have more details to announce soon. 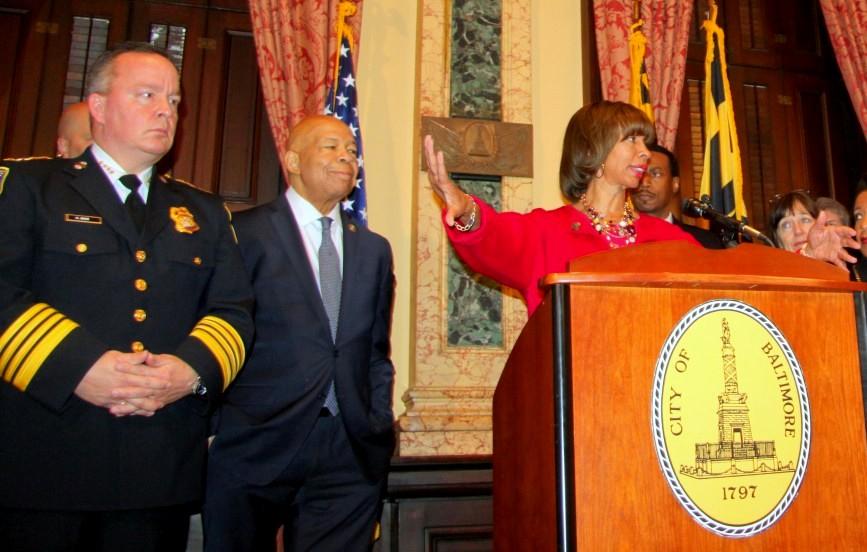 Police Commissioner Kevin Davis stands beside Mayor Pugh as she announces the signing of a consent decree mandating police reform with the U.S. Justice Department in January. (Fern Shen)