Eyes closed – one of them fighting back tears – the supporters of a bill that would have phased in a $15 minimum wage in Baltimore over the next five years listened to the news they knew was coming.

Lead sponsor Councilwoman Mary Pat Clarke could not muster the 10 votes she needed, under rules in the City Charter, to force Council President Bernard C. “Jack” Young to hold a special meeting to permit a vote on overriding the mayor’s veto.

But Clarke vowed to continue the $15 minimum wage effort on behalf of the 98,000 city residents she described as, “underwater: the working poor in poverty.”

“I don’t know what the next act is, but there has to be a next act,” she said, to applause. 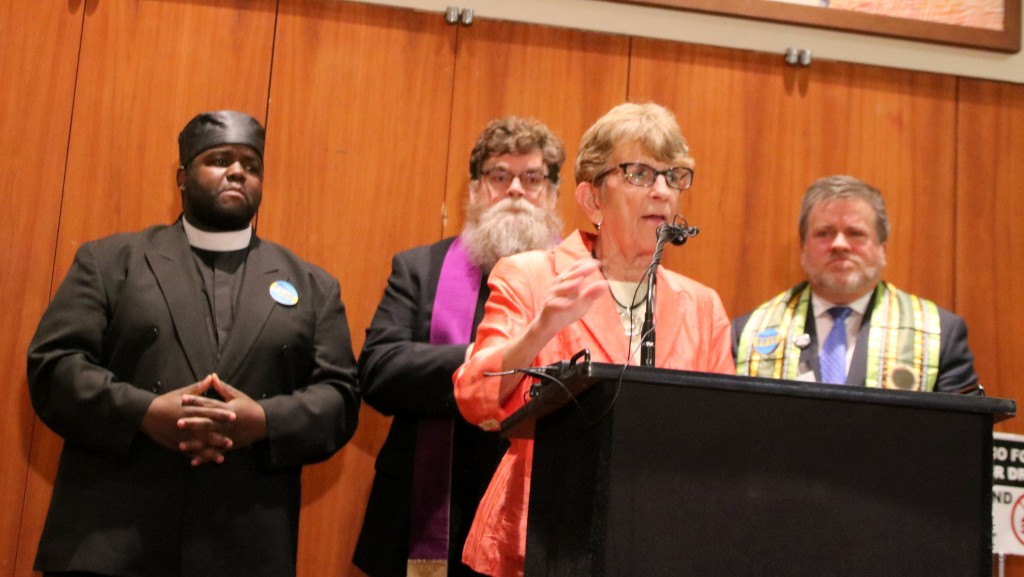 Councilwoman Mary Pat Clarke says she will continue the fight for a $15 minimum wage in Baltimore, despite the failure of her bill after a mayoral veto. (Fern Shen)

“I ain’t stopping – it’s just so wrong for people to work and work and still be poor,” said the 14th District councilwoman, who led an unsuccessful effort to pass a similar bill last year.

Speaking with reporters, Clarke said she may mount a petition drive to have the city-wide minimum wage hike put before voters by referendum in the 2018 election.

“It would have to be judge proof,” she said, noting with a grin that the idea is preliminary. “I’m just beginning! I’m looking for lawyers.”

Asked later how the defeat left her feeling, she said after a pause, “I’m angry.”

“We had this taken away from us, after an overwhelming majority said they wanted it,” she said.

Clarke was referring in part to the “super-majority,” her description of the 11-3 majority by which the bill had passed when it was approved by the Council last month.

Including Councilman Brandon Scott (said to be a bill supporter but out of the country), that vote had indicated there was enough support for an override of Pugh’s veto.

Only Councilmen Isaac “Yitzy” Schleifer, Eric T. Costello and Leon Pinkett had voted against it.

Today, Clarke said, the only councilmembers she could get to sign the letter calling for special meeting to vote on overturning the veto were six – Shannon Sneed, Zeke Cohen, Ryan Dorsey, Kristerfer Burnett, Bill Henry and John Bullock.

Whose support had melted away?

Councilman Ed Reisinger said he would not support an override of Pugh’s veto. And then Council President Young and Councilman Robert Stokes said they would not sign Clarke’s letter.

Speakers yesterday called out all those who shifted position.

Her Hand not on the Bible

Fr. Ty Hullinger, of the Catholic Archdioceses of Baltimore, reminded the crowd about Pugh’s striking remark, explaining to reporters last week why she was not honoring her promise in an AFL-CIO candidate questionnaire to sign the $15 minimum wage hike bill.

“She said, ‘I didn’t put my hand on the Bible,’” Hullinger said, prompting hissing and calls of “Shame, Shame” from some in the crowd.

He called on the Council to take action and went on to quote from the prophet Jeremiah:

“Woe to you who build your home by unrighteousness,” Hullinger said, “who make your neighbor work for nothing.”

During the Council meeting, Clarke addressed the chamber briefly, arguing that an increased minimum wage would lessen the economic inequality that threatens the fabric of the city.

“This injustice remains and it tears our city apart and it keeps us in shreds,” she said. “I don’t know where to turn next, but there is always a way.”