Listen up movie lovers and sentimentalists nostalgic for the era of the video store, a time before Amazon, Netflix and Hulu struck hard like comets, rendering these cinephile gathering places extinct.

Do you miss having a physical place to go to browse the shelves for great movies you never knew you needed to see?

Do you miss being able to bring home foreign films or riveting documentaries, chat with fellow movie buffs or ask store staffers whether a campy movie is so-bad-it’s good or . . . simply bad?

In other words, do you miss Video Americain, the iconic Baltimore video store whose last branch closed in 2014?

If the answer to any of these questions is “yes,” you’ll be interested to know about Baltimore Video Collective, a group working to start Beyond Video, a DVD rental store, as a non-profit collective.

The loss of video stores “left a void in our city that can’t be filled by corporate streaming services,” says THE BEYOND VIDEO KICKSTARTER VIDEO. 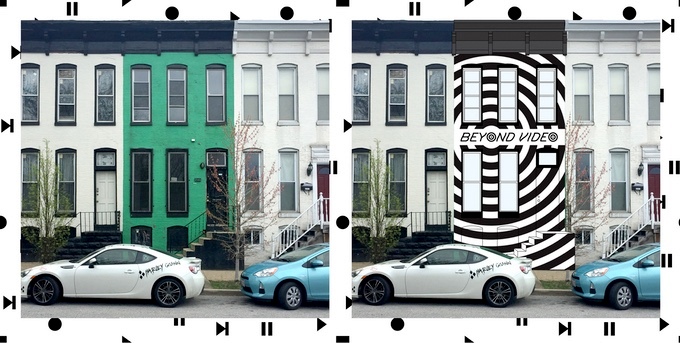 How they hope the North Howard Street building will look after a makeover. (Beyond Video Collective.)

“It will be so much more than a place of business,” it says. “Like a great bookstore or record store, Beyond Video will be a hub for entertainment and discovery – a record of our history and an exciting social space where friendships, ideas and collaborations are formed.”

The crowdfunding site also explains more about the group’s “updated business plan for the 21st century” that uses Strong City Baltimore as a non-profit fiscal sponsor. Also listed are the people behind the project: “former experienced former video store managers, employees and filmmakers and passionate cinephiles.”

So far, the Collective has accumulated 5,000 films through donation and purchasing, including the majority of the renowned Criterion Collection.

They have identified a retail space in Remington/Charles North on Howard Street but need money to renovate it and to expand the collection.

One of the Collective members, Joe Tropea, curator of films and photographs at the Maryland Historical Society, passes along information on the group’s fundraising activities in the final days of the Kickstarter.

“Our event on Wednesday night at New America promises to be a fun awareness-raising party that will feature DJs Secret Weapon Dave and Hybex (Cutmayor/Basq Haus),” he said.

Really, how can you resist?