Signs posted by the city sent panic through the small band of tent-dwellers living in the area near the Jones Falls Expressway. The signs screwed onto concrete pillars said the area is to be cleaned on Tuesdays from 10 a.m. to 2 p.m. and items found there would be removed or trashed.

This morning, as the new policy was to take effect, Sherry Sellers said she and the others had been worried about being displaced even before the signs went up.

“Police officers approached me a month ago and said we were going to be moved,” said Sellers, 55, who has been living in the blue tent on Bath Street, just off the Fallsway, since April.

“They said ‘We’re going to take your tents down,’” she recalled. 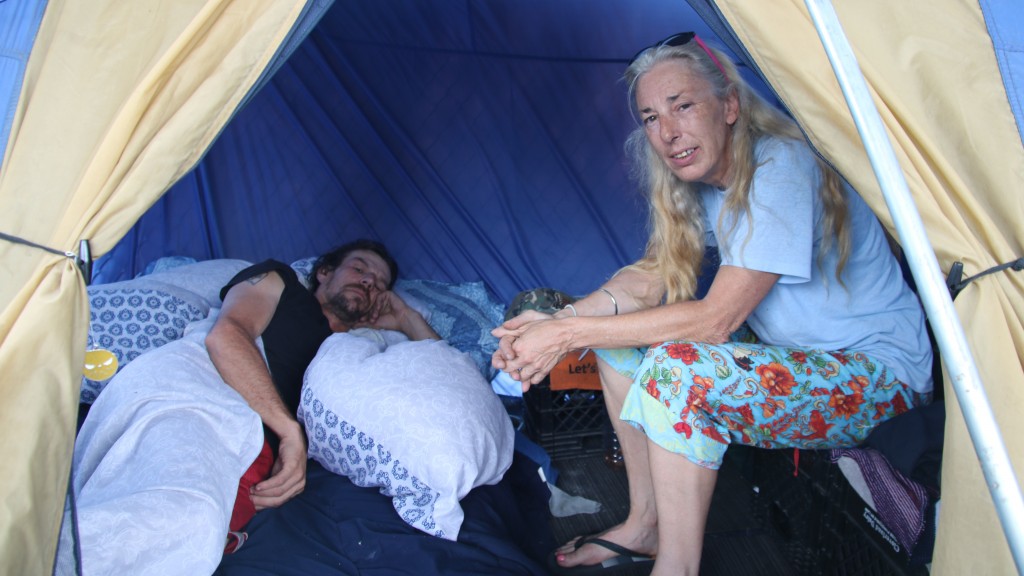 Troy Kolb and Sherry Sellers said they began living in a tent besides the Fallsway in April, after Troy, a carpenter, was laid off. (Fern Shen)

Concerned, Sellers dug up a flier from the Homeless Persons Representation Project (HPRP) that she had and called the number.

The lawyer she reached there, Carolyn Johnson, went to the Fallsway this morning to see what would happen. She and two other housing advocates and a couple of reporters watched as city workers approached Sellers’ tent and four others.

“We’re just cleaning up the area and ensuring there are safe and healthy conditions,” said Chris Rafferty, deputy director for Homeless Services. 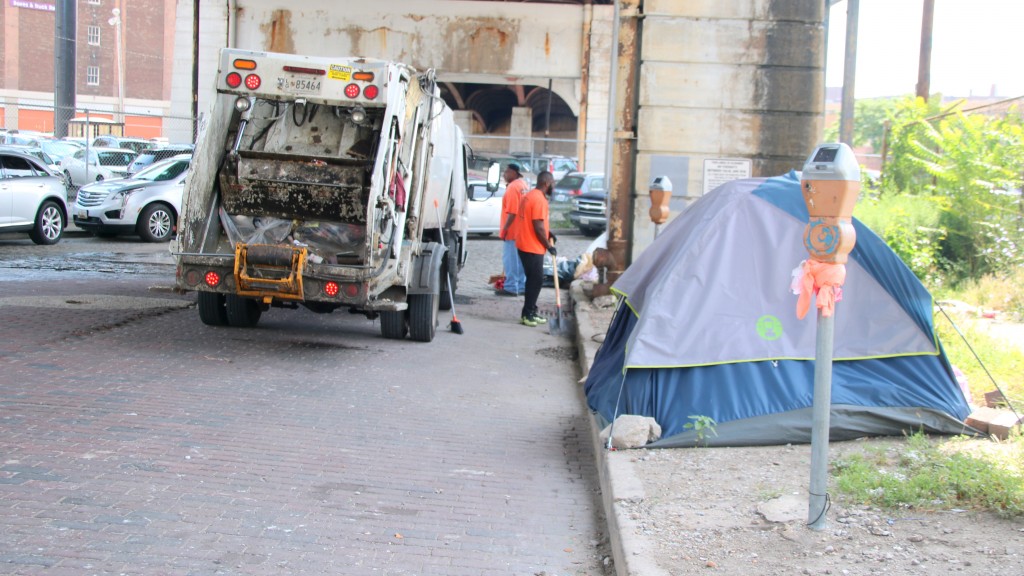 A city trash truck prepares to haul away a pile of refuse next to tents on Bath Street. (Fern Shen)

Rafferty directed a couple of Department of Public Works employees as they tidied up the area with rakes, brooms and a trash truck. The residents had made it easier for them by pre-cleaning and pushing the trash and an abandoned tent into piles.

Rafferty said cleaning, not displacement, has been the intention all along.

“The people who put the signs up were not properly informed,” Rafferty said, referring reporters to their his supervisor for more information.

Johnson and the other housing advocates on hand did have more questions.

“I am not okay with these signs,” Johnson said. “They say ‘If you don’t move your stuff we’re going to take it.’ That’s a menacing sign for the people who live here. This is not the way to end homelessness.”

“Somebody could be off at a doctor’s appointment and come back and find everything gone,” she continued.

The camp clearing issue has been a sensitive subject in Baltimore for years, with housing advocates protesting when encampments were cleared without warning during the Stephanie Rawlings-Blake administration and again, with little warning to service providers, under the administration of Mayor Catherine Pugh.

Johnson said the new signs open the door to callous and arbitrary treatment.

She noted language that specifies only “unsoiled items” will be held and stored for 90 days, while the rest “will be discarded.”

“Somebody has to deem your things ‘clean!’” she said. “Who does the deeming?” 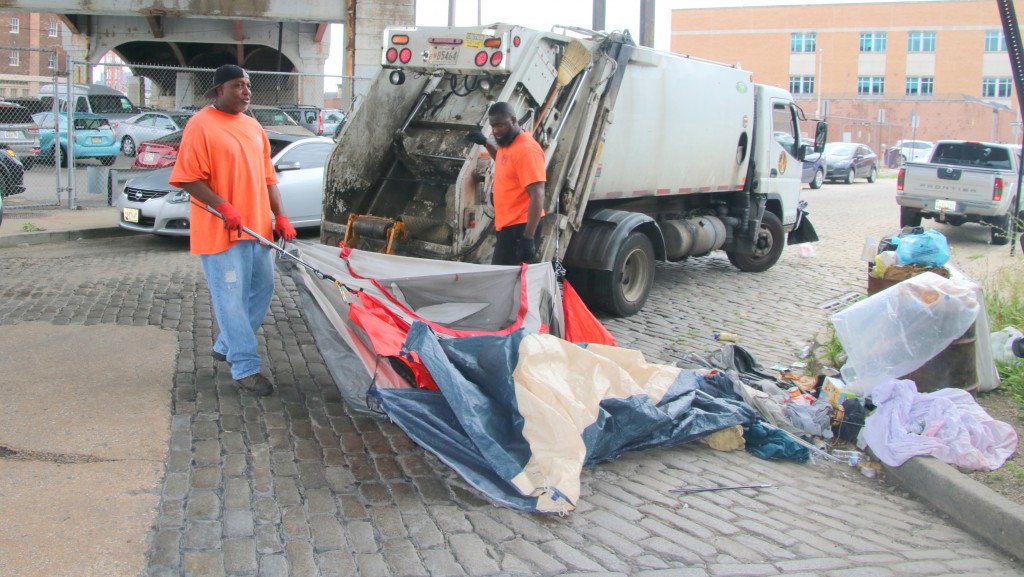 City workers said this tent being hauled off had been on the refuse pile residents had raked up and had not been occupied. (Fern Shen)

Adam Schneider, an instructor at the University of Maryland School of Social Work, joked that “I should have brought my crowbar.”

“If they’re really just cleaning and not clearing, then these signs are actually wrong,” he said.

Terry Hickey, director of the Mayor’s Office of Human Services, said the signs were posted “as part of an inter-agency effort to keep the area in and around Fallsway clean, safe and sanitary.”

“There is no underlying purpose and the signs and cleaning schedules are not a pretext to making the residents move permanently,” he said.

“From time to time, it may be necessary to get under and between tents to clean, place rat bait, etc., and officials might have to ask people to move their belongings temporarily,” he continued.

“We have informed advocates and residents this might be the case. Any information being put out there to the contrary is simply not accurate.”