While downplaying a mandatory gun sentencing bill that met with strong public opposition on Tuesday, Mayor Catherine Pugh has released a laundry list of other initiatives she plans to pursue to quell Baltimore’s spike in violent crime and homicides.

She described the measures as part of a “holistic and comprehensive” Violence Reduction Program that she will formally announce to the public in about a month.

Most of the items have been previously cited by the mayor as her young administration grapples with a homicide toll that reached 200 deaths yesterday – nearly double the pace of killings just a few years ago.

Yesterday she defended the initiatives as part of a broader strategy to improve the quality of life in the same neighborhoods that are experiencing the current crime wave.

“I’m meeting with the community” she said. “I’m talking to folks from the Muslim community. I’m talking to folks that engage in de-escalating violence. . . I’ve engaged about 20 people who come here every other week to sit down and tell me what’s going on in the streets. More than what I am seeing because I’m out there.”

The mayor agreed that the one-year mandatory gun sentencing bill she announced with fanfare two weeks ago “doesn’t fix the problems” of communities faced with unemployment, poor transportation and homelessness.

But she defended the legislation as “a tool” to keep repeat offenders from committing more handgun crimes or at least keeping them off the streets for a one-year “cooling off” period.

Key to the mayor’s violence reduction strategy is reliance on the guidance of two U.S. Department of Justice consultants credited with helping police in Los Angeles sustain a five-year reduction in violence.

She said that, in studying “best practices” of cities such as New York, Boston and Los Angeles that have cut crime, the consultants will bring their expertise to the Baltimore Police Department.

Currently advising the Chicago Police Department, the consultants will come here next week “as part of our work with the DOJ consent decree,” said Pugh spokesman Anthony McCarthy, who declined to disclose the consultants’ names or the potential cost of their services.

The consultants will spend a few weeks reviewing the violence reduction strategy that Police Commissioner Kevin Davis has recently developed. Yesterday, the mayor ticked off elements of the plan in a bullet format:

(The war room has been a feature at police headquarters for years, but was given greater exposure as a  nexus of coordinated local-state-federal crime fighting after the Freddie Gray disturbances in 2015.)

(Denouncing the Black Guerrilla Family was a favorite theme of former Police Commissioner Anthony W. Batts, who was dismissed after the Freddie Gray disturbances.)

(Currently, 1,500 officers have body cameras, including the one purportedly caught planting evidence. The remaining officers will have them by the end of the year, police say.)

• Focus on enforcement and patrols in Transformation Zones, a group of zones (17 at last count) set up by ex-Commissioner Batts where empirical evidence showed a high number of repeat offenders, parolees and probationers.

• Expand police presence in neighborhoods where after-school violence has occurred, particularly near transit hubs and schools.

(The police have already beefed up patrols downtown and the Inner Harbor in response to complaints by Donald Fry, CEO of the Greater Baltimore Committee, and other business leaders.)

• Adopt Integrative Communications, Assessment and Tactics (ICAT) training for police officers to de-escalate confrontations with the public and individuals suffering from mental illness. 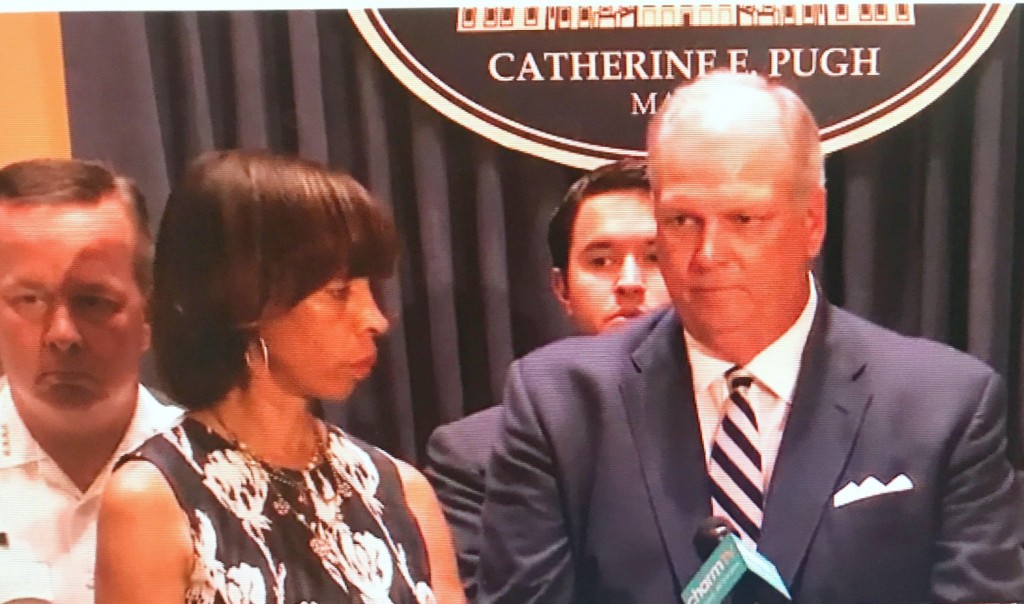 After the consultants review BPD’s strategy, Pugh said she plans to release her full crime plan – something that Councilman Brandon M. Scott, chairman of the Council’s Public Safety Committee, has publicly scolded the mayor for not doing.

(The 16 parole and probation officers had been pulled during the Rawlings-Blake administration. The restoration will mean that two officers will be assigned to each of the city’s nine police districts.)

As previously reported, the Hogan administration has awarded Baltimore a $2 million grant to buy laptops for patrol cars, thereby allowing officers – for the first time – to electronically file reports from the field and check background and outstanding warrants in real-time.

Up for consideration is BPD’s request for additional state money to buy license plate readers and gunshot detection technology.

(The city currently has gunshot detection, but it is limited to a three-mile radius that doesn’t cover neighborhoods with the highest murder toll.)

Getting Officers on the Streets

In addition, the Pugh administration is trying to reach an agreement with the Fraternal Order of Police to revise the shift schedule, which was changed from five 8-hour shifts to four 10-hour shifts in the last 2014 contract.

Hailed at the time as providing greater flexibility in deploying the police force, the schedule change wound up doing little more than increase overtime pay to officers. (Details here.)

Mayor Pugh said Commissioner Davis also plans to reassign officers on desk jobs to street patrols and replace them with civilians who will perform the same administrative tasks.

The changeover in personnel is expected to cost the city $9 million, but Pugh expects it will more than pay for itself in reduced overtime – and safer streets.

In a prepared statement yesterday, the mayor said, “It is easy to point fingers and demand action, but I want to make this point abundantly clear: there is no single, easy way to reduce violent crime. Our holistic and comprehensive Violence Reduction Program includes both short-term and immediate strategies as well as longer-term objectives for keeping the city safe and healthy in the future.”