When residents move into this gleaming 12-unit building in West Baltimore next month, they will find beds made up with fresh linens, cleaning supplies stacked like a pyramid on the table and welcome mats that say, “Home Sweet Home.”

A less tangible, but perhaps more important, feature of Sojourner Place at Argyle will be a lot of support – and not a lot of judgment – for recently homeless people.

That’s the concept behind this type of shelter, known as permanent supportive housing and operated according to “housing first” principles – the idea that people should be given shelter first, then helped as they work through financial, drug, alcohol or mental health problems.

“There’s where the person from Health Care for the Homeless will be working – providing 40-hours-a-week support – and this is the property manager’s office,” said Shannon Snow, of the Episcopal Housing Corporation, the project’s owner and developer.

“And here’s the shared area, our community room,” Snow said, showing a visitor a sunny space with comfortable chairs, table and a kitchenette. 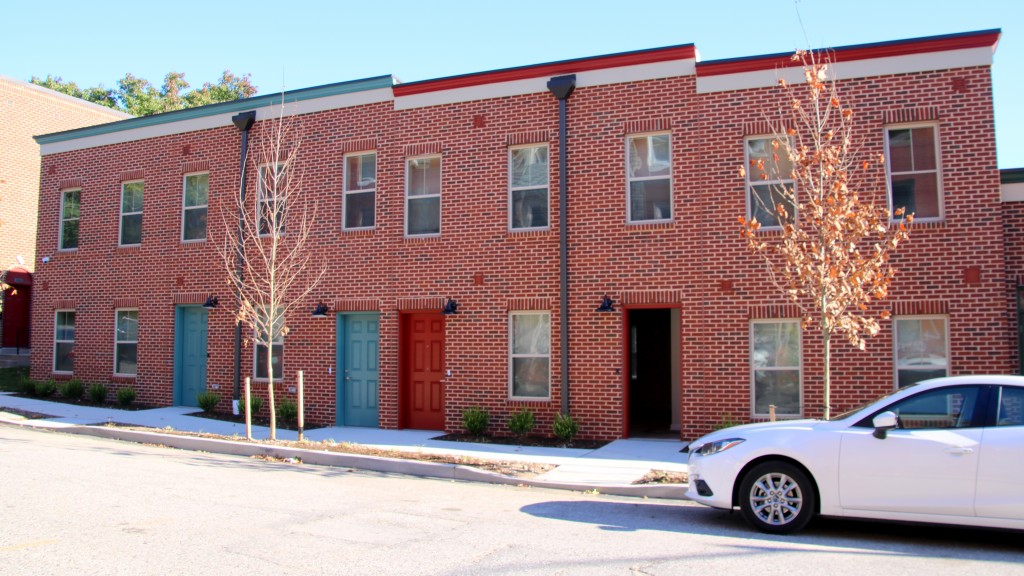 PRISTINE: Sojourner Place at Argyle consists of 12 units in a place where six rowhouses once stood in the 1400 block of Argyle Avenue. (Fern Shen)

Permanent supportive housing exists on a scattered-site basis in Baltimore, but it can be isolating. What makes this project in the Upton neighborhood unique is that a dozen people with a common bond will be living next to each other.

“I know Health Care for the Homeless is excited about the idea of kind of creating a community among the people who live here,” said Snow, the project director, pointing out that it may be a version of the “community” people find on the street.

The congregate arrangement, together with support provided by project partner Health Care for the Homeless, make Sojourner Place one of a kind in the city and an example of a much-needed housing option, according to advocates.

“The city would do well to replicate this sort of project if it’s serious about impacting homelessness,” said Jeff Singer, a longtime housing advocate who teaches at the University of Maryland School of Social Work.

Pulling together the $2.2 million project took several years, according to Snow, who is preparing for a November 1 ribbon-cutting.

The land was purchased for $6,000 from Baltimore, which had torn down six rowhouses on the site in the 1990s.

The funding sources include private contributions from the Weinberg Foundation and the Bank of America Charitable Foundation, state funds from Project C.O.R.E. and the Maryland Partnership Rental Housing Program, and $700,000 in city HOME funds, Snow said. 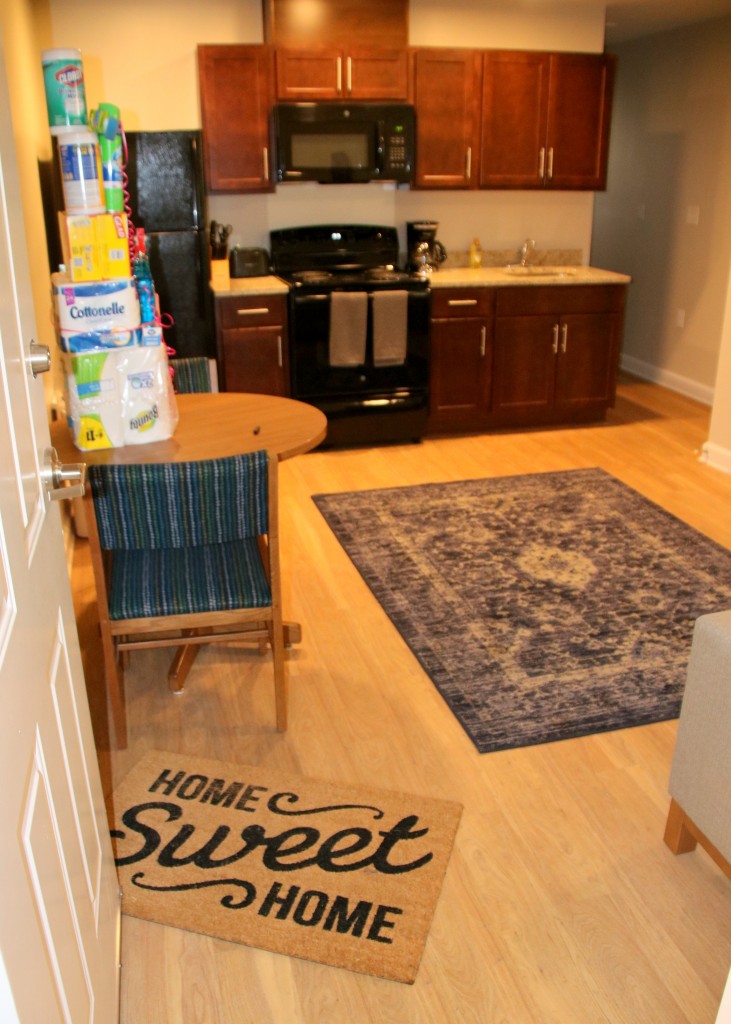 INSIDE: Volunteers have outfitted each unit with a welcome mat and more. (Fern Shen)

An additional essential ingredient was vouchers from the Housing Authority of Baltimore City that provide $1,030 monthly subsidies to cover each unit’s utilities

Another hurdle was paying for the support services, which will include a therapist case manager and a peer advocate. “Fortunately Health Care for the Homeless can cover all that through their internal billing to Medicaid and other sources,” Snow said.

Services available to the tenants include rehabilitation, vocational and employment assistance, health and dental services, income and benefits support, substance abuse treatment and linkages to additional services as needed.

Residents will have some responsibilities as well.

They need to contribute 30% of their income towards their rent and must abide by the terms of their lease.

The 12 individuals were not subjected to drug or alcohol tests, but are being selected via a multi-stage screening process from a waiting list by Health Care for the Homeless and the Housing Authority.

What they will find when they arrive is a shocking contrast.

Across Argyle Avenue, nearly all of the houses are vacant and boarded-up, several with graffiti, smashed windows and plants growing inside.

One of the buildings is propped up precariously with wooden supports that project onto the sidewalk. A trashed sofa sits on the sidewalk. 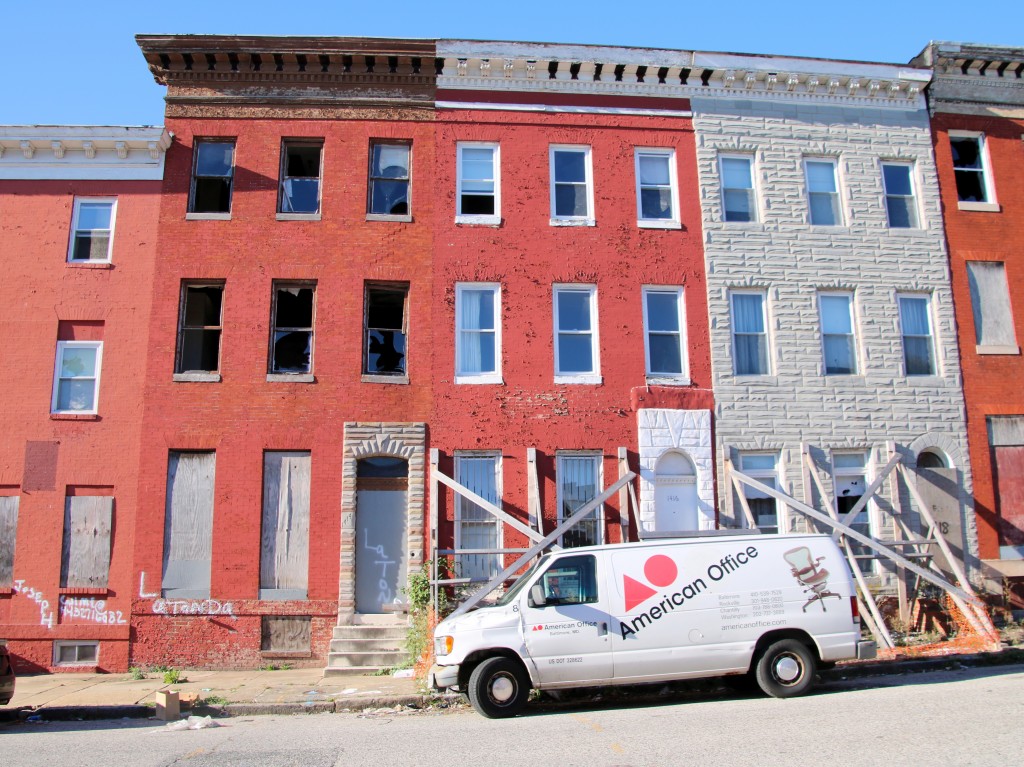 In the next block down the street is an empty lot surrounded by a chain-link fence where the state’s Project C.O.R.E. has demolished the houses.

Sojourner Place at Argyle, meanwhile, has new matte-black mailboxes, pink roses blooming outside and green grassy space next-door and in back.

“We’re thinking of putting some picnic tables back here,” Snow said, showing a visitor around. “Maybe some raised beds for a garden.”

Inside, the small (440-square-foot) one-bedroom units have been outfitted by a team from United Way with rugs, TVs, towels, soap, shampoo and more. Two units are designed to accommodate people who use wheelchairs.

Despite the immediate dilapidation surrounding the project, Snow said its “central location” had distinct advantages.

“The Upton Metro station is right nearby. There’s food shopping, a post office, health care and other services right over there on Pennsylvania Avenue that people who may be without cars need.”

Along with the advantages of the neighborhood come its disadvantages – drug dealers also peddle their wares with seeming impunity on that nearby stretch of Pennsylvania Avenue.

But Snow said Sojourner Place at Argyle is an experiment worth trying in a city where thousands can’t afford rent and sleep on the streets or surf on friends’ couches. She said the project is a response to advocates’ calls for not just emergency shelter and transitional housing for the homeless, but for more permanent options.

“We’re really excited and think this is going to be successful,” Snow said. “And if it is – we’re hoping to replicate it across the city.”