A new report documenting how sewage treatment plants in seven states pollute the Chesapeake Bay finds that the two worst offenders are located in Baltimore and owned by the city:

The Patapsco and Back River Wastewater Treatment Plants.

“The problems include sewage overflows, illegal bacteria and phosphorus discharges into the Patapsco River and globs of foul-smelling fat and grease being released into the waterway because skimmers on treatment tanks failed (a recurring problem),” EIP said.

The two Baltimore plants had the most nitrogen and phosphorus pollution of any of the facilities reviewed, according to the report released today, “Sewage and Wastewater Treatment Plants in the Chesapeake Bay Watershed.” 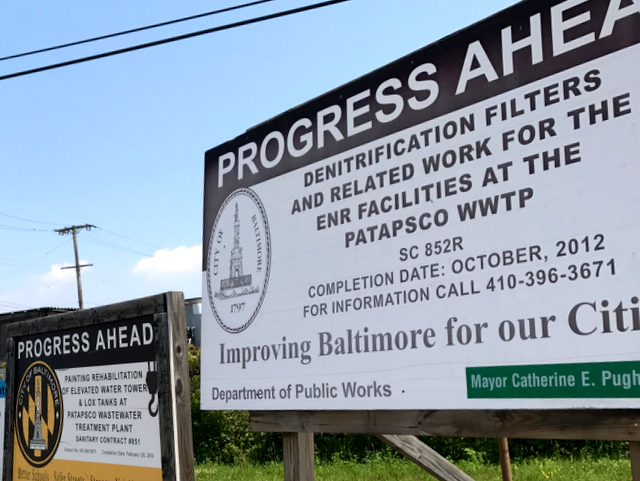 Signage touts the contracts that the Board of Estimates and DPW have awarded to fix the deficiencies at the Patapsco treatment plant. (Mark Reutter)

Fueling algal blooms and low-oxygen “dead zones,” nitrogen and phosphorus have been the target of Bay clean-up efforts for years.

Despite the passage in 2004 of Chesapeake Bay Restoration Fund legislation (the so-called “flush tax”), more than a dozen major upgrade projects remain incomplete, accounting for about half the pollution reduction the law originally envisioned.

“They left the biggies for last,” said EIP’s Tom Pelton, noting that the two chief polluters, Back River and Patapsco, “have been very tardy and rife with violations.”

A review of publicly available documents by Pelton and report co-author Courtney Bernhardt found 21 plants in Maryland violated their permit limits in 2016.

• The Patapsco plant released four times its annual permit limit for nitrogen and more than twice the permitted level of phosphorus.

• The Back River released 29% more than its permit limit for nitrogen.

• The trend continued into 2017, with the Patapsco facility discharging, as of August, more than twice the total permitted for the entire year.

• Other Maryland plants exceeded their limits significantly in 2016, including the Salisbury facility, which discharged 302% more than permitted.

For D.C.-based EIP, the findings – including repeated badly-blown deadlines to perform plant upgrades – point a finger at lax enforcement by Maryland and Baltimore officials.

“It shows the city really needs some more oversight from the state because it’s been dropping the ball on clean water for years,” said Pelton.

He notes the city’s failure to meet its obligations to repair its failing, leaking sewer mains under a 2002 federal consent decree whose deadlines have been extended into the 2020s and beyond.

“It shows the city really needs some more oversight from the state because it’s been dropping the ball on clean water for years,” an EIP staffer says.

The EIP report notes, for instance, that the Patapsco plant failed to comply with its Maryland Department of the Environment (MDE) permit requiring modernization to be completed by June 2014.

And after MDE gave the Patapsco facility a break – via a consent decree with a revised completion date of December 2016 – the city missed that deadline as well.

State officials, quoted in the report, said that the compliance delays statewide were caused by “the complexity of the upgrades.”

“Maryland is upgrading its wastewater treatment plants to the limit of technology, while ensuring the continued operation of these facilities during construction,” said Jay Apperson, MDE’s deputy director of communications. 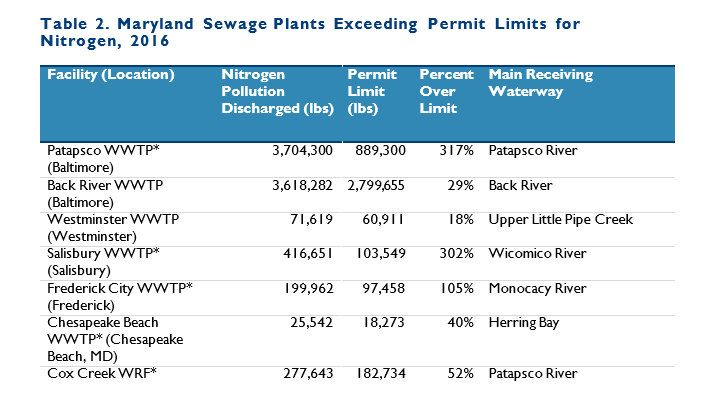 The Patapsco plant dumped 3.7 million pounds of nitrogen pollution into the Bay last year – 4 times its permit limit of 889,300 pounds. The Back River plant exceeded its permitted limit by nearly 1 million pounds. Two other offenders – the Salisbury and Frederick treatment plants – do not directly discharge into the Chesapeake Bay. Salisbury’s treated waste flows into the Wicomico River and Frederick’s into the Monocacy River. (Environmental Integrity Project)

Since the inception of the Bay Restoration Fund, Maryland has reduced nitrogen pollution by 6.3 million pounds and phosphorus by half a million pounds, he said. About $1.25 billion in grants have been provided from the fund for nutrient removal upgrades.

Jeffrey Raymond, spokesman for the Baltimore Department of Public Works, acknowledged that the $250 million Patapsco upgrade will be completed “by the summer of 2018, more than three years after the original target date.”

“Construction and contractor issues on this very complex project led to delays, but the City of Baltimore is confident we will end up with a facility. . . built to the highest standards,” Raymond says in the report.

That allusion to “contractor issues” is presumably a reference to the court battle between the city and a contractor over alleged “defective pipe systems designs” and poor planning.

Providing additional responses by email yesterday, Raymond said “there have been a few overflows at the plant primarily caused by extreme wet weather conditions,” which he said were reported to MDE.

“It usually takes the plant two to four weeks to recover from these conditions,” he added.

In addition to exceeding its pollution limits, the Back River plant had a number of violations, including overflows and “the release of suspended solids,” resulting in fines of $800 in 2012 and $20,000 in 2016, according to the report.

Located in Dundalk, the plant underwent a $263 million upgrade to reduce nitrogen pollution but failed to meet a December 2016 deadline to complete it.

“Constructability issues” caused the delay, Raymond said. “Since it is not possible to take the entire facility out of service, the contractor was only allowed to work on small sections at a time.”

According to Raymond, the upgraded nutrient removal system went operational last month, but is still in a testing period.

“We expect to accept the system by the end of the year,” Raymond said.

“The Back River and Patapsco upgrades, the city says, will be up next year and they should be in compliance,” Pelton said. “But it’s clear the state and everyone else need to be vigilant and make sure everything is functioning as they say.”

The report includes a number of recommendations for how to better manage wastewater pollution, including steering clear of pollution trading systems like the one the Hogan administration is proposing in the upcoming General Assembly.

The program is intended to increase the efficiency of Chesapeake Bay clean-up efforts.

In Virginia and Pennsylvania it allows plants that are over their limit to buy their way out of violations by purchasing credits that essentially pay money to other facilities that discharge less pollution.

MDE’s Apperson said Maryland said the “greater flexibility and reduced costs” of the proposed the establishment of the Maryland Water Quality Trading Program will “accelerate the restoration of the Chesapeake Bay while bringing economic benefits to Maryland.”

Pelton said the programs in Pennsylvania and Virginia have resulted in lack of accountability and “pollution hotspots.”

“Last year a pollution credit swap,” the report said, “allowed the Strasburg Sewage Treatment Plant in the Shenandoah Valley to release 2,942 pounds of phosphorus, more than three times its permitted limit, into the North Fork of the Shenandoah, which already has excessive levels of phosphorus and suffers from algal blooms.”

• Pollution trading systems, like those of Virginia and Pennsylvania, should be avoided in Maryland and other states not already employing them because they can lead to reduced accountability and increased local pollution “hot spots.”

• States that do allow facilities to engage in pollution trading should require the plants to accurately and promptly report, to public databases, credits purchases and their impact.

As significant as municipal sewage is as a source of nutrient pollution in the Bay, run-off from agriculture, suburban lawns and city streets still overshadows it.

Wastewater was the source of only 16 percent of the nitrogen pollution in the Bay in 2015, down from 28 percent in 1985, EIP notes.

“That’s far less than the 45 percent of nitrogen pollution in the bay from farm fields, a relatively constant figure over the last three decades,” their report says.

About 17 percent of the Bay’s nitrogen pollution cames from suburban and urban runoff in 2015, which is up from 11 percent in 1985.

Phosphorus pollution in the bay has experienced similar trends for the wastewater sector.