Centered around Bath and Pleasant Streets, the encampment had grown from a couple of tents huddled beneath the concrete pillars of elevated I-83 to at least 30 tents and tarp dwellings scattered about the nooks and crannies of expressway ramps, parking lots and roadways near City Hall.

Between 25 and 40 people lived there – some for days, others for months.

Here are some key points about the camp clearing and the broader issue of homelessness in Baltimore:

1). The removal took place without any arrests or serious incidents. After the morning rush hour, the police closed off Guilford Avenue and waited out the encampment residents. They kept their cool even after several campers angrily dumped their belongings on the street. 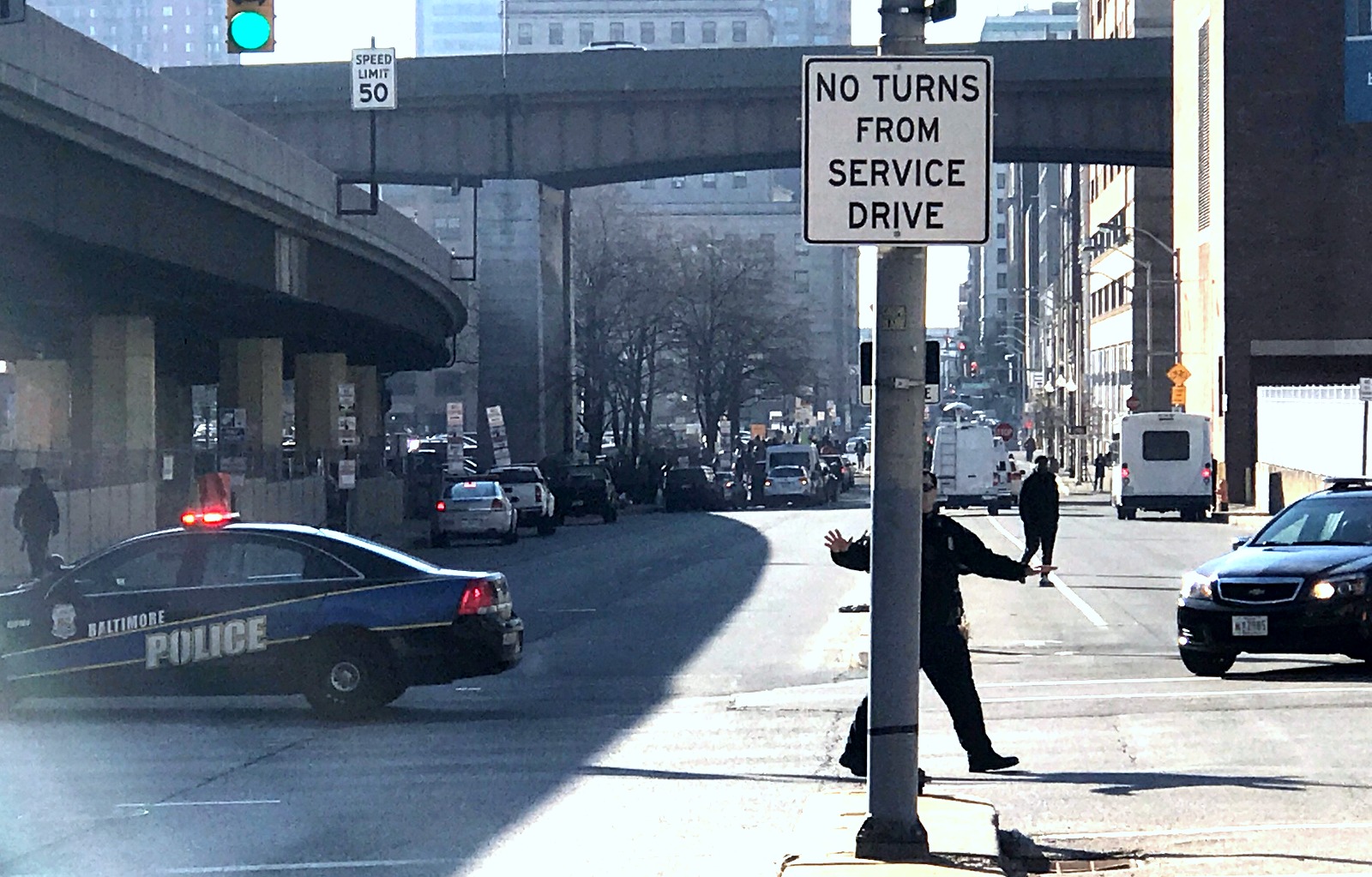 Police block off Guilford prior to the razing of the tent city. (Mark Reutter)

2). The city had arranged for 40 people (20 men and 20 women) to go to a dormitory facility opened up by Volunteers of America Chesapeake. The renovated building, the former home of the Durrett-Sheppard Steel Co., is about as far away from City Hall as possible – on the far eastern end of Monument Street. It is flanked by railroad tracks and, across Monument Street, a Potts & Callahan stone-crushing plant.

3). Five homeless people availed themselves of the facility by mid-afternoon. Five more were expected to arrive by the end of the day, a VOA spokesperson said. In the past two weeks of frigid weather, 13 campers had moved to the facility. 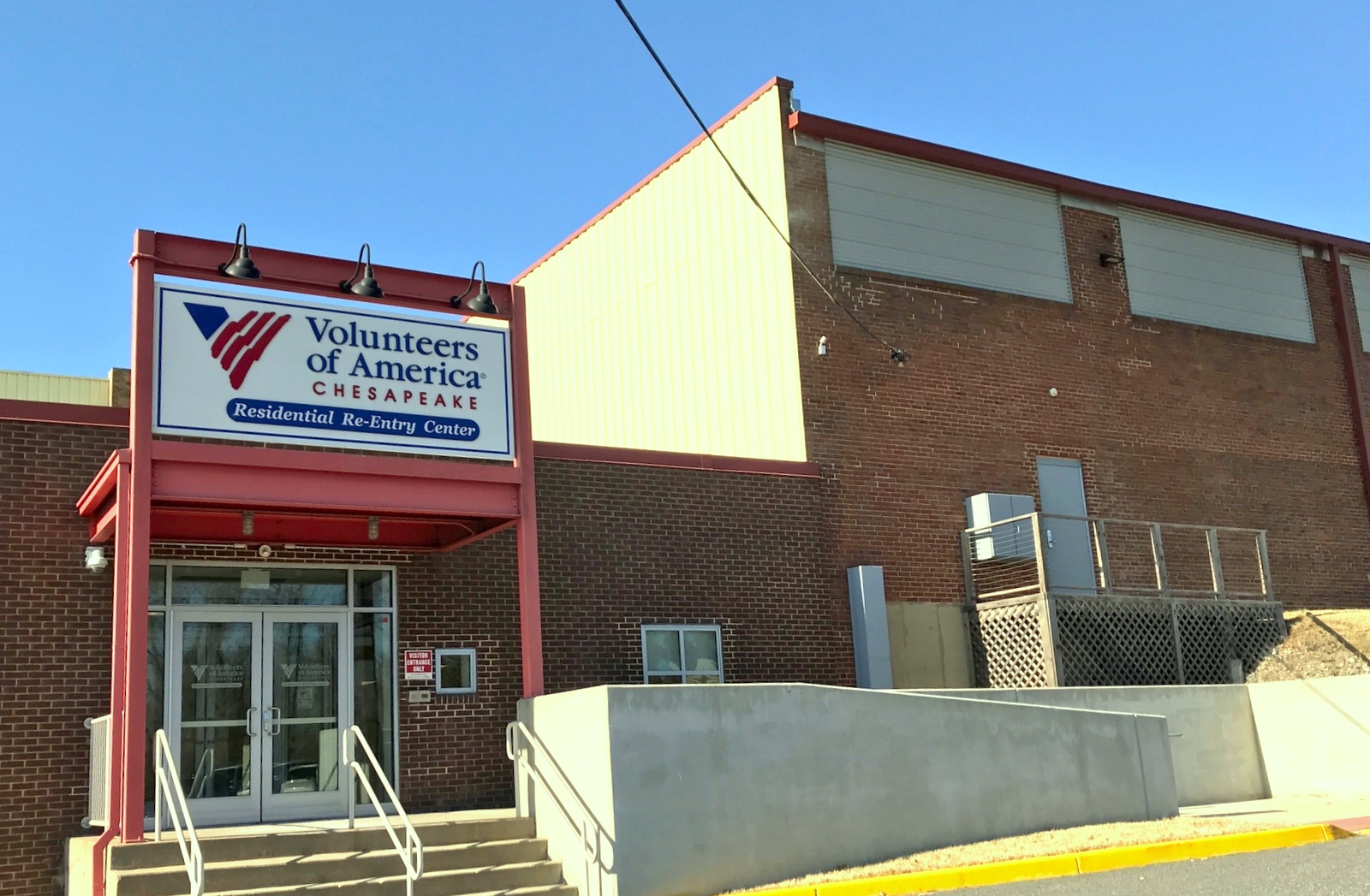 The ex-factory on East Monument Street where the campers were offered shelter. (Mark Reutter)

4). VOA staff barred this reporter from looking at the facilities and demanded he leave the building. They said all questions had to go through an off-site media spokesperson.

5). Three homeless people who had moved into the facility and were contacted by The Brew said the following:

Person One – “It operates like a jail. You’ve got to document everything.” 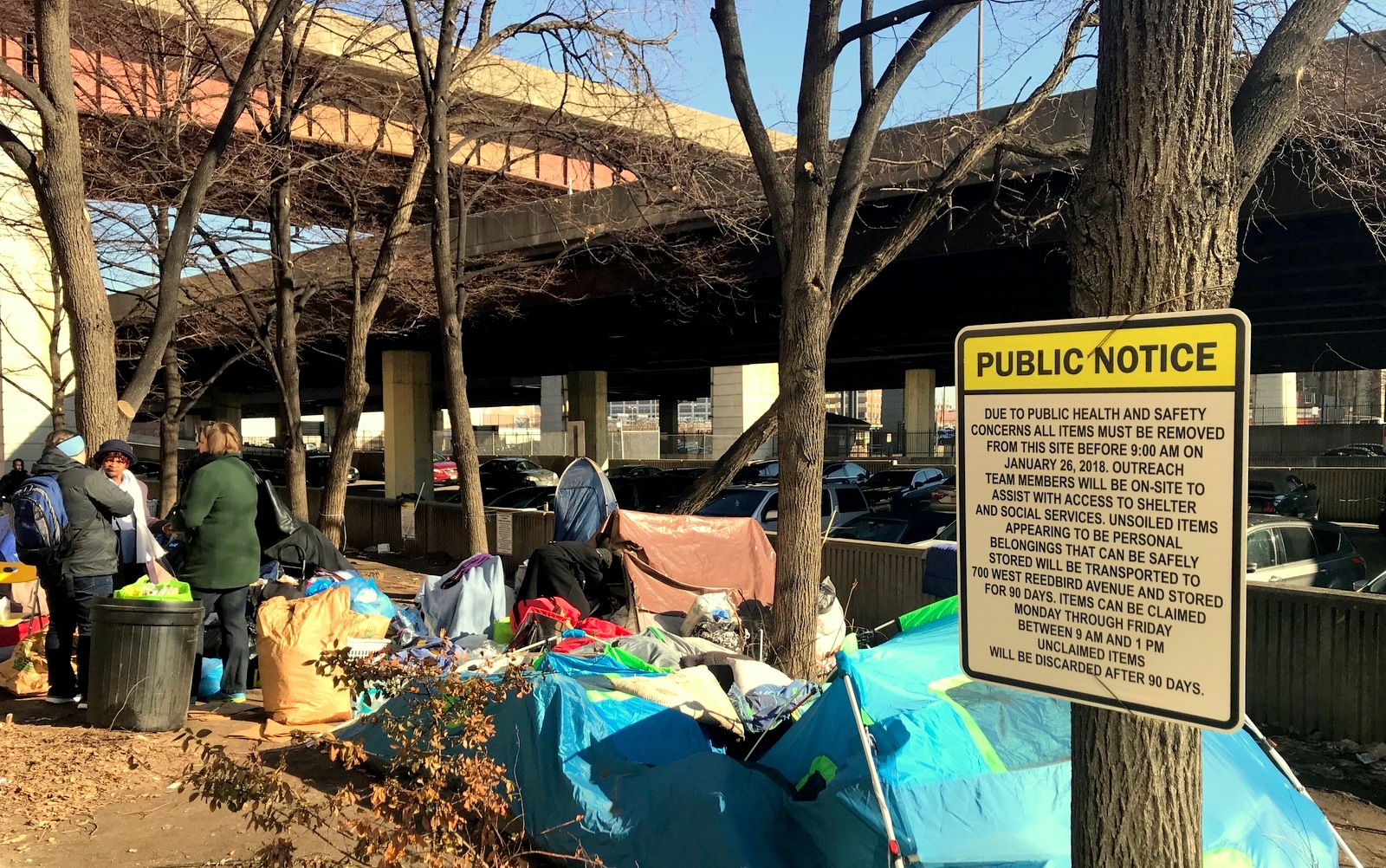 The city gave the campers time to gather up their belongings before the cleanup crews came in. (Mark Reutter)

6). VOA spokesperson Dana M. Cohen said, in an email to The Brew, that the facility “has plans in place to aid those coming from the encampment with case services, housing locators, behavioral health services and employment services.” Terry Hickey, director of the Mayor’s Office of Human Services, says the shelter will also provide shuttle service to help residents get to their appointments, service agencies and jobs.

VOA staff barred this reporter from looking at the facilities and demanded he leave the building.

7). None of the VOA services (see above) are up and running, according to the three persons interviewed. There is no shuttle service, the gym is not yet open, a computer lab is not accessible and, in the words of one, “The people here don’t know what’s going on. They’re new, everything is getting organized. They’re saying everything will be done next week.”

UPDATE: Candace Vanderwater, chief operating officer of VOA Chesapeake, says that access to the gym and computer lab is not part of VOA’s service agreement with the city. (The facilities are used by people in a federal prison reentry program who also live in the building.)

Regarding shuttle service, a van will be made available at least three-times-a-day to residents. Case workers and housing locators have been assigned to the former camp dwellers. “We’re meeting folks, reducing their anxiety and trying to get them settled and comfortable and to buy into the process,” she said. 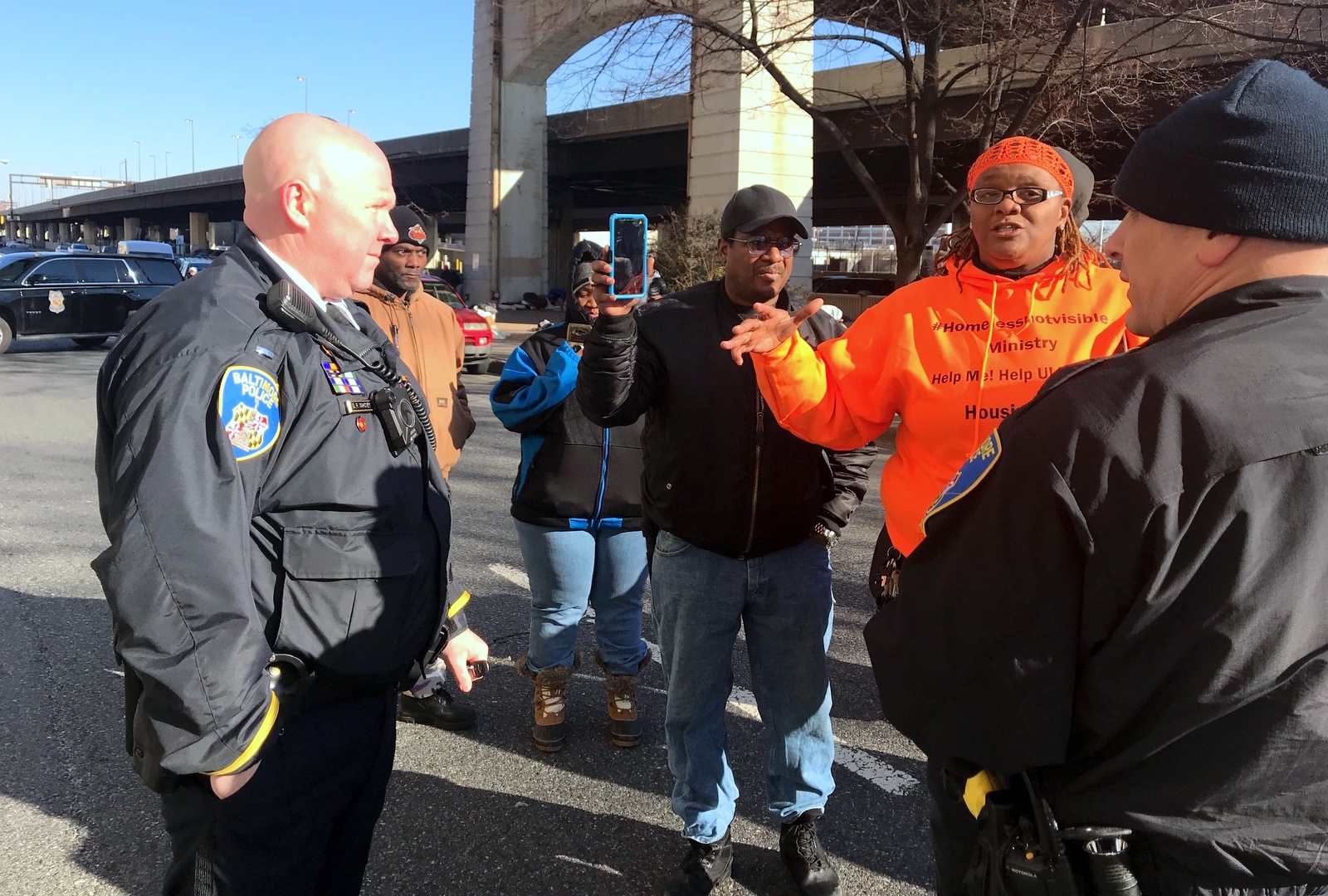 Christina Flowers, founder of the Belvedere Real Care Providers Network, lectures officers about the rights of the campers. (Mark Reutter)

8). Hickey said the city has agreed to pay the VOA $705,828.92 to provide services for the tent dwellers under a six-month agreement that can be extended. Getting everyone in Baltimore who is now homeless into permanent shelter is the city’s goal, Hickey says, even though Mayor Catherine Pugh estimates that would cost $350 million – money, she says, that would have to be raised by private donors and philanthropies.

9). The VOA agreement sparked criticism by homeless advocates. More than 25 organizations and individuals signed a petition this week calling the razing of homeless encampments “inhumane and ineffective” without permanent affordable housing. 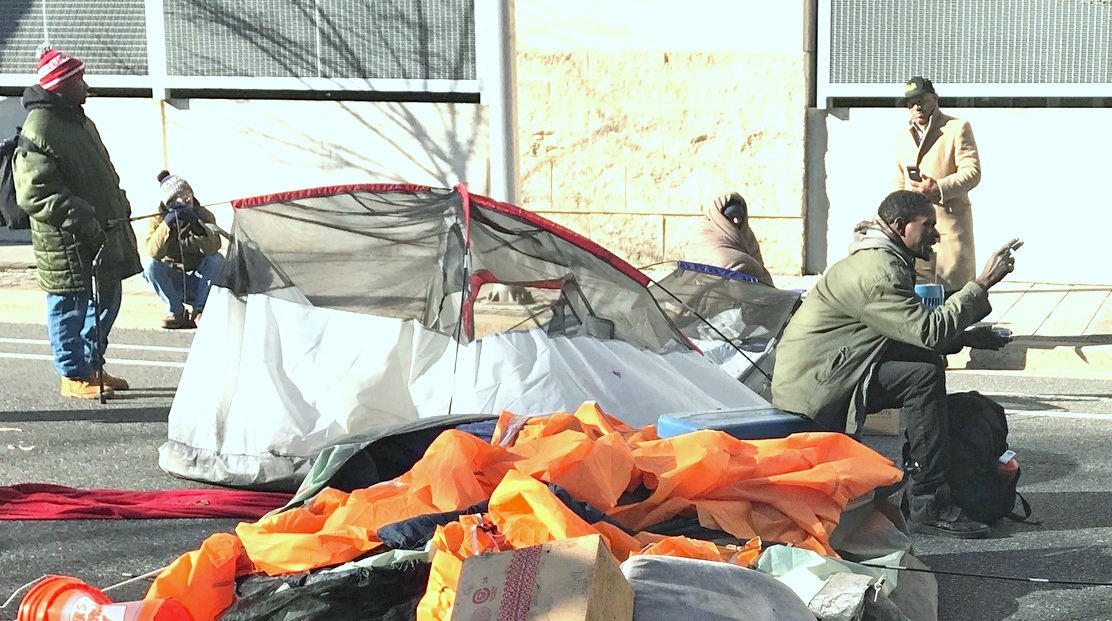 The city has made false promises about helping the homeless find permanent places to live, artist Kelvin Morris shouted out to all who would listen. (Mark Reutter)

10). The homeless persons evicted from their tent city are likely to reappear somewhere else. One of them, Kelvin Morris, sat atop a pile of refuse on Guilford Avenue yesterday and declared, “You can clean this shit up, but we’ll be back. There are a lot of us, and we’re not scared. We’re angry.”

“It’s not cold,” said a former camper asked what he thought of the VOA facility.

Another camper, Tony Hall, said he would never agree to go to a city shelter because, he said, people are robbed and he fears for his personal safety.

Waving his arm toward City Hall, he said, “The mayor promised she’d give us housing, but she ain’t doing nothing. And now she wants to put us in an institution on the edge of town.” 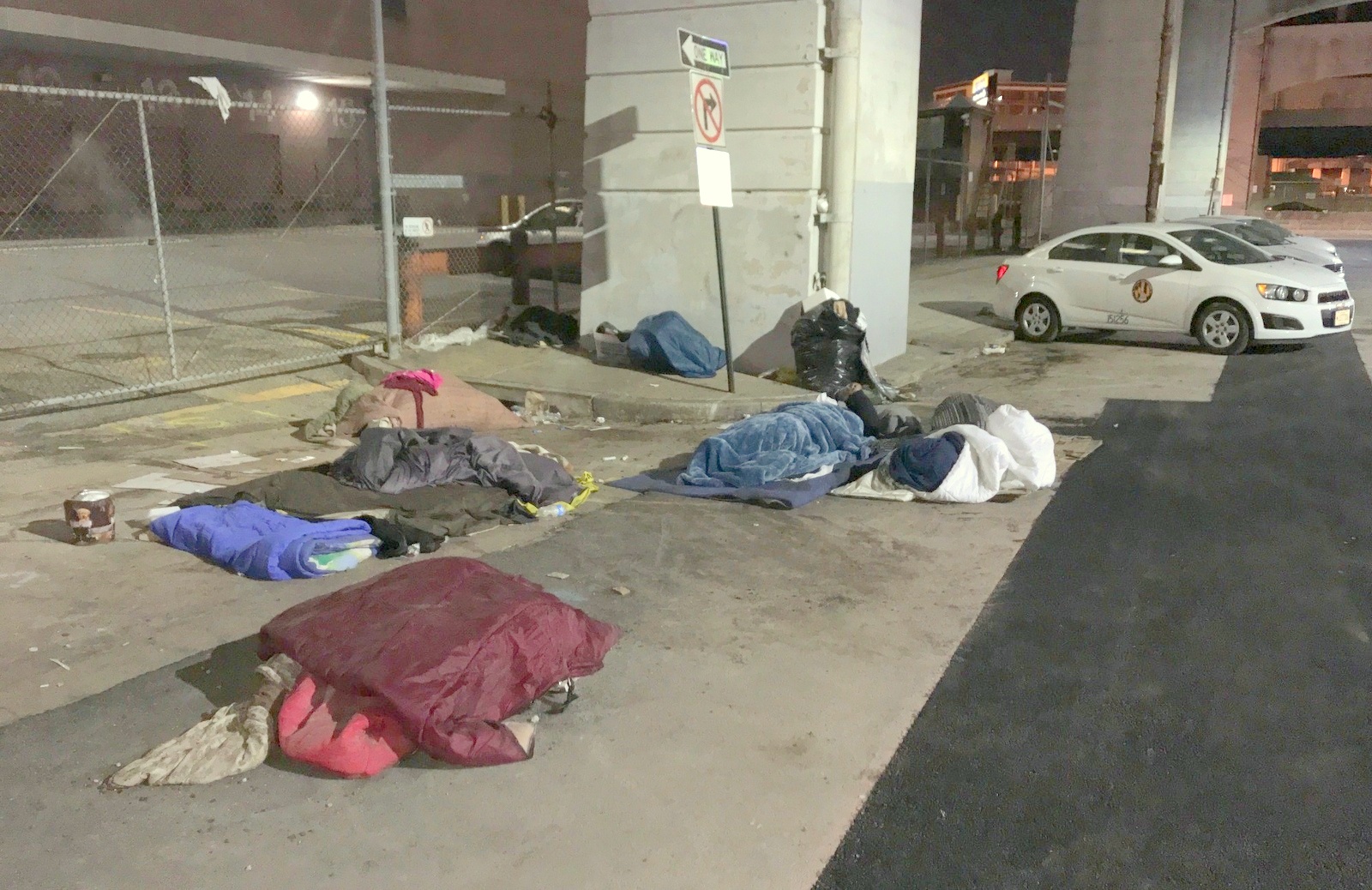 Just a block from where the homeless camp was razed yesterday, sleeping bags and other possessions of homeless persons reappeared. BELOW: On Calvert Street, a man beds down for the night over a steam grate. (Mark Reutter) 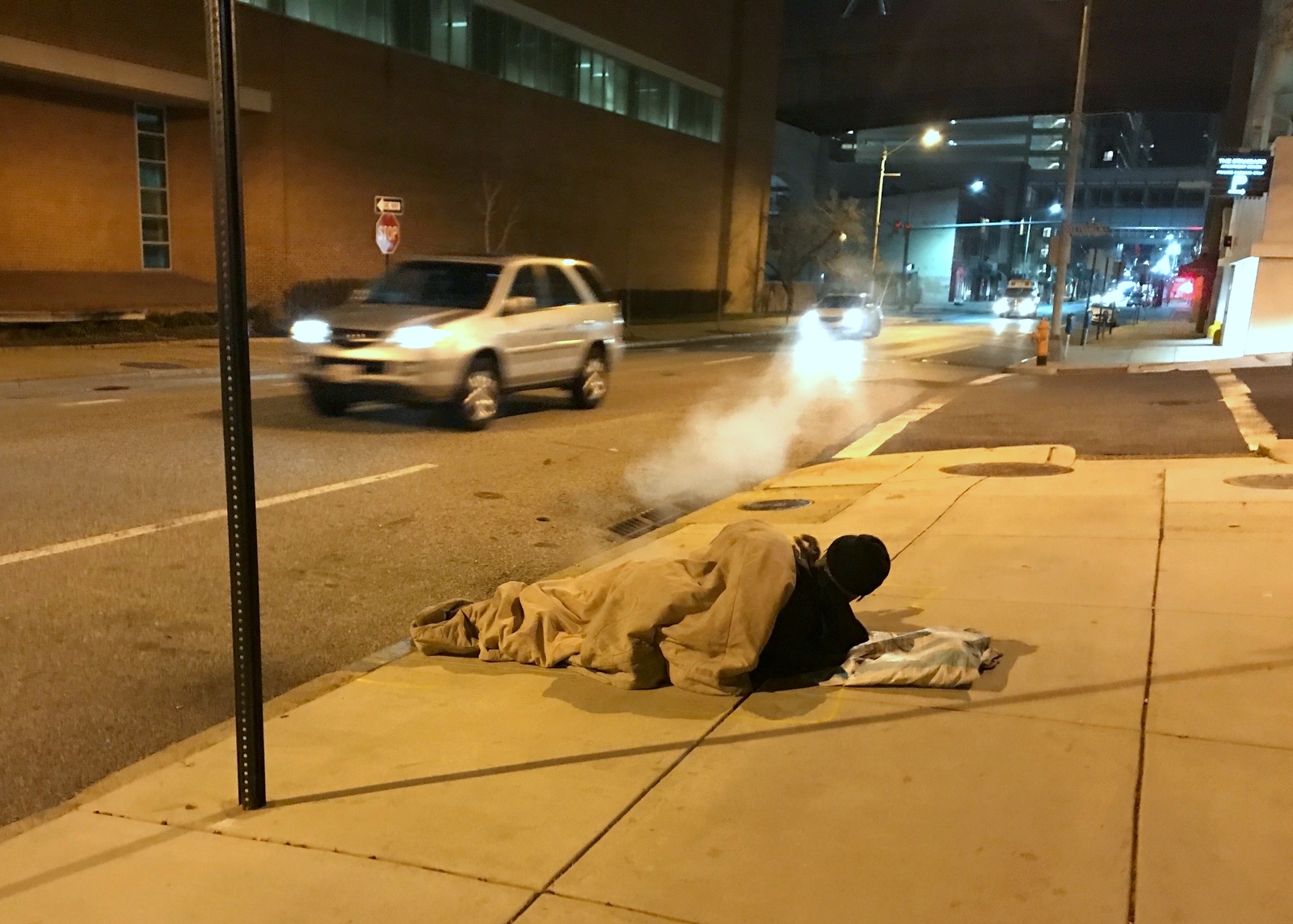