In the days and hours leading up to Darryl De Sousa’s confirmation as Baltimore’s new police commissioner, he and Mayor Catherine Pugh sought to reassure the public that, on the heels of the worst police corruption case in recent memory, he is the man for the job.

Questions were swirling about the contents of his internal affairs file, as was criticism after two incidents in which the 30-year veteran shot people while on duty.

Activists and reporters asked for the file’s release, and Pugh refused to say whether she had seen what was in it.

However, just minutes before the City Council’s 14-1 vote to confirm De Sousa last night, Pugh spoke up to say that she had “thoroughly reviewed” the material.

“[I] can confirm that any allegation involving misconduct of any kind by the Commissioner-Designate is unsubstantiated,” Pugh tweeted.

Over the weekend, De Sousa used his new Twitter account to send a signal of his own. 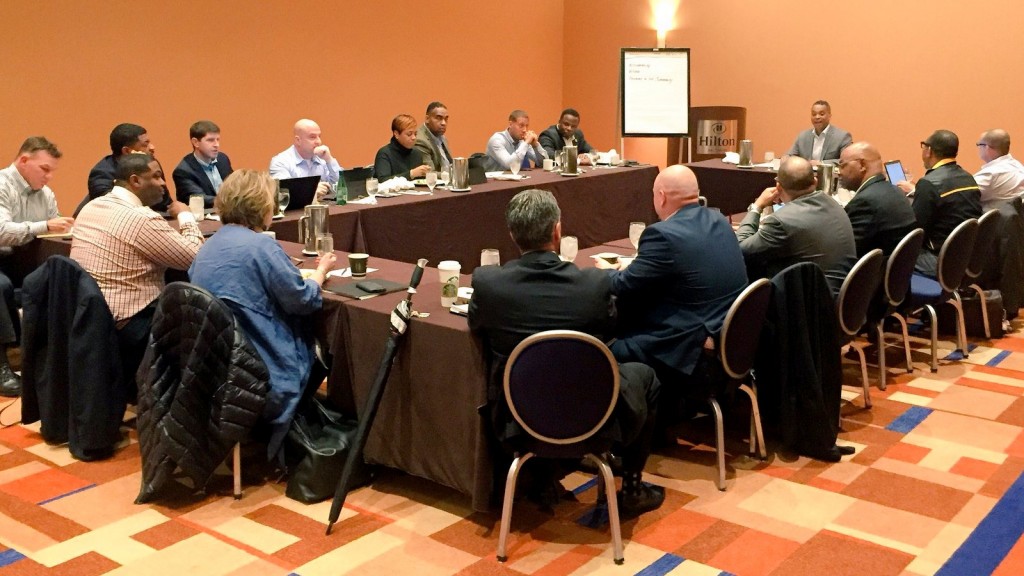 On Sunday, Darryl De Sousa tweeted this photo of a meeting he said would usher in “a new vision and culture” at the Baltimore Police Department. (@Darryl_De_Sousa)

He tweeted a photo of  the “Commissioner’s Call to Accountability,” a gathering of police brass (apparently held at the Hilton Baltimore) that he said was “defining a new vision and culture for Baltimore’s police department.”

Mixed Signals on the Wall

But a media event at police headquarters last week had some features that undercut the message the 53-year-old is trying to convey.

The press gaggle was marched past a sign on the seventh floor that said “Gun Trace Task Force.”

(Pugh likes to remind reporters that the GTTF, whose members either pleaded  guilty or were convicted on federal racketeering charges, has been disbanded.) 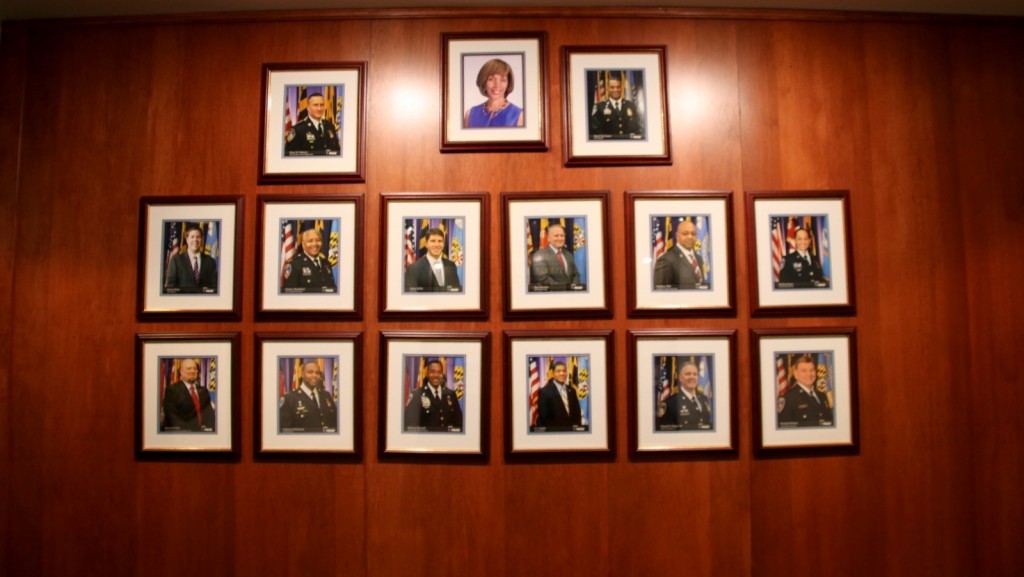 Next to De Sousa’s office was an array of photos of top BPD brass. Near the very top, just slightly below the level of portraits of the mayor and De Sousa, was the photo of Deputy Commissioner Dean Palmere.

The leadership reorganization De Sousa has unveiled as a key component of his new administration does not include Palmere.

The veteran cop announced his retirement on the same day that testimony came out at the GTTF trial that he helped coach one of the unit’s officers on how to avoid punishment after a shooting.

Palmere said his retirement had nothing to do with the allegation.

The increased costs of new police leadership are laid out in tomorrow’s Board of Estimates agenda.

Another cost anticipated for BPD’s new management lineup: Framing for photos of the men and women named to serve in it.

The spending board is set to approve $31,626 to the Furst Brothers to provide the department with “picture framing supplies” over the next year.

Contrasting views of De Sousa were on display at his nomination vote before a Council committee last week.

“When he was the commander of the Northeast District, crime was at a 20-year low,” Mike Hilliard, community services director at HARBEL, said, expressing confidence in the designee’s ability to “root out corruption.”

Shaivaughn Crawley, meanwhile, expressed no confidence in De Sousa or in a department whose officers, he said, are irredeemably compromised.

“You can’t clean a dirty floor with a filthy mop,” Crawley observed.

De Sousa, meanwhile, acknowledged that there are still “bad or corrupt cops” on the force, but pledged to get rid of them.

“Are we taking measures right now to find out who they are? Yes!”­ he told the panel.

Last night the Council approved De Sousa without discussion and with a lone negative vote.

The holdout to unanimous approval was Ryan Dorsey, who spoke after casting his vote.

De Sousa’s “commitment to not be corrupt or to not violate civil rights” was “improved rhetoric,” the 3rd District councilman said. “But fundamentally, it’s a commitment to more of the same.”

Dorsey, who said he favors a top-to-bottom revamping of the police force, told the packed chamber he hadn’t heard satisfactory answers from De Sousa about critical questions. And he complained that he hadn’t been allowed to see the designee’s internal affairs file.

“We need an entirely new vision in policing,” Dorsey told the Council. “That’s not what I see here.”

Dorsey was chided by President Bernard C. “Jack” Young (“Councilman, you know for a fact that under law we cannot see personnel records”) before the body moved on to other business.