Angry and scared that they could be the next to die in a mass school shooting, teenagers took turns with the bullhorn as hundreds of students walked out of Baltimore Polytechnic Institute today to protest gun violence.

He and others also pointed out that in a city with the worst homicide rate in the nation – 343 people killed last year – Baltimore students already have harrowing experiences with gun violence.

“We are here because people are dying in our city every day,” said Alana Hines, 14, noting that today’s walkout, coordinated with others by students across the country, was inspired by last month’s mass shooting at a high school in Parkland, Florida, that claimed the lives of 17 people. 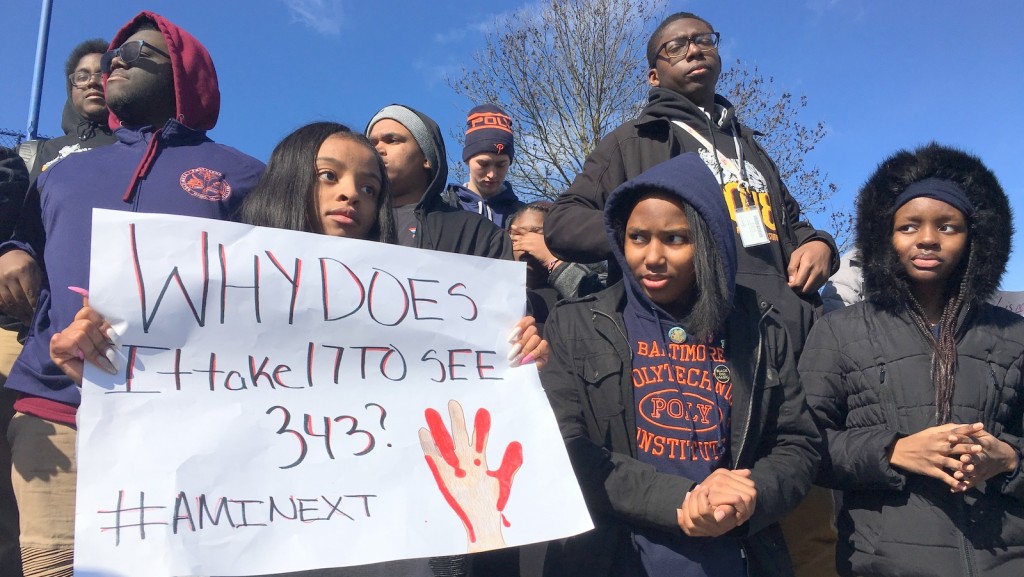 “They could have been us”

The Poly walkout was one of thousands that took place around the country and across Baltimore today following the Marjory Stoneman Douglas High School massacre by a 19-year-old equipped with a semiautomatic AR-15.

“Those classrooms were too familiar. They were too much like Poly,” one girl said, confiding that she hadn’t previously taken the issue seriously. “It’s painfully clear to see that if you change a few of the details up, they were our peers. They could have been us.”

Lying on the ground on the school’s football field, the Poly students observed 17 minutes of silence in honor of the Parkland victims as part of the national walkout. One girl chided others who might be complaining about the frigid temperatures, pointing out another time it’s cold – “when you’re dead!”

Asked what local and national leaders could do about the problem, most students answered the same way.

“Every time one of these shootings happens they try and put it off on peoples’ mental problems but you’re always going to have some people with those issues,”  said Sydni Baker, 17. “We need more gun control.”

Baker blamed Donald Trump, the National Rifle Association and “the people who support them” for the lack of stronger gun laws.

Sitting on the ground nearby, Juan Rodriguez said city politicians are responsible, too. “We elected them to be our voices. They should push the laws through. Why don’t they do something?””

“Every time one of these shootings happens they try and put it off on peoples’ mental problems,” said Sydni Baker, 17.

Wynn had a long list of measures he said would make students safer, including banning the sale of assault-style weapons, strengthening background checks and increasing ownership ages. 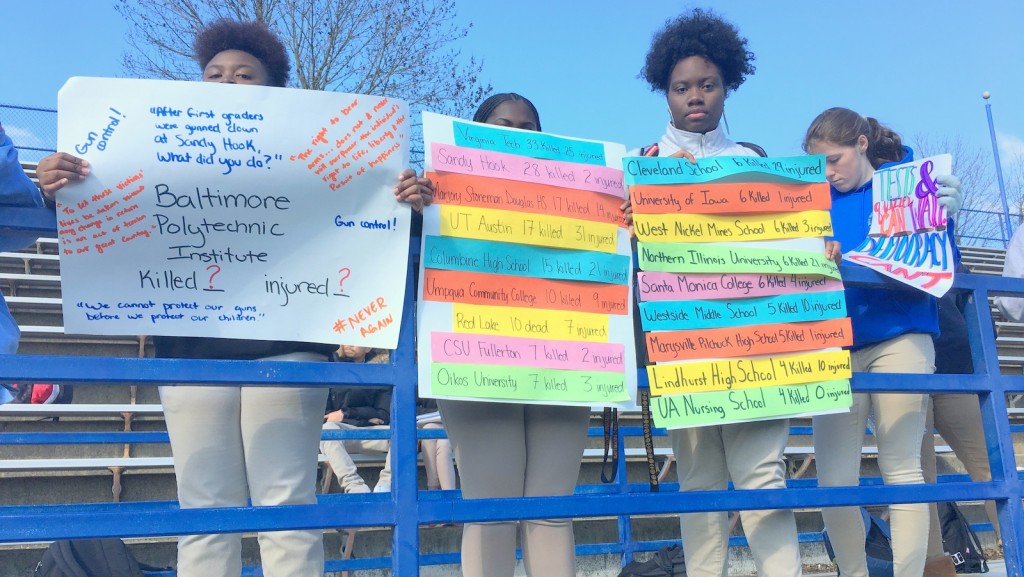 Students’ signs list past school shootings and the death toll from each. “After first graders were gunned down at Sandy Hook,” one girl’s sign asked adults “what did you do?” (Fern Shen)

Whether the threat is from a future mass shooter or from gun violence that permeates Baltimore streets already, worry about personal safety haunts the students, given the emotional remarks they delivered one after the other.

Some spoke of finding out about the death of loved ones by text and seeing memorial postings for slain friends on social media.

Fearing for their lives, Savanna Zachau said, is why she and her friends exchange “I’m home” texts with each other.

“I don’t want to get shot,” said Zachau, who was overcome following her speech to classmates, one of whom hugged her afterwards.

Wynn reminded the crowd of a member of the Poly family who was shot and killed in December, robbed on the way to the store.

“We’re doing this for Jonathan Tobash who was once one of us, the Class of 2016,” Wynn said.

“I stand here to fight for my right to live and I have to ask you something,” he said. “Will you stand with me?”

The crowd’s answer was a long and loud cheer. 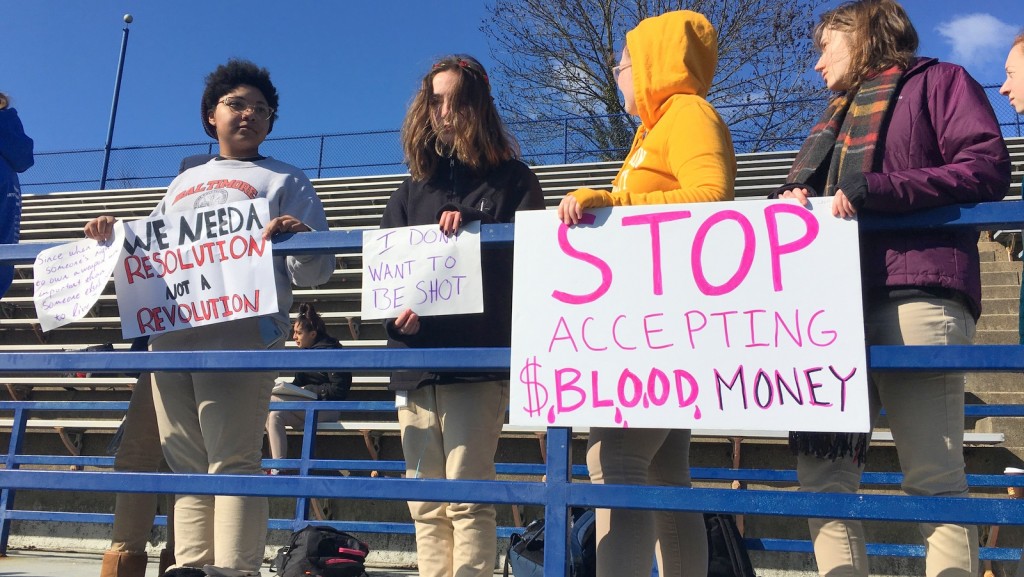 After the mass shooting at a school in Parkland, Fla., a protest at Baltimore Polytechnic Institute. (Fern Shen) 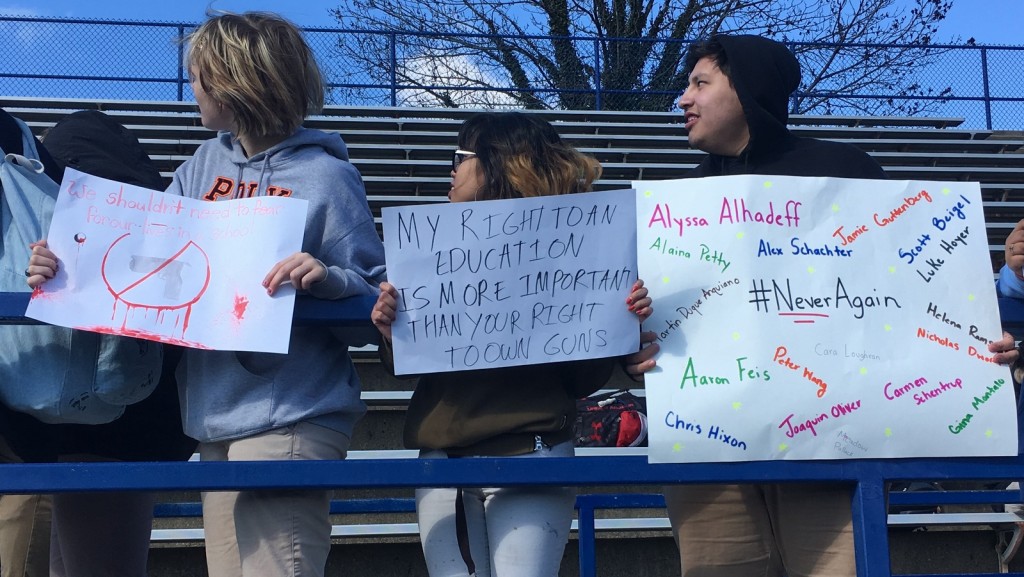 Students remember those slain at Parkland and call for gun control. (Fern Shen)