Ever since Angel Settle learned that her sister, Karen Simpkins, was found dead Tuesday on the grass across the street from Baltimore’s “Code Blue” homeless shelter, she’s been trying to find out what happened.

Days later and with little success, she is deeply angry.

“Last I heard, my sister was in the hospital. So how did she wind up here?” asked Settle, of Bowie, standing at the intersection of Centre Street and the Fallsway, the place where her 58-year-old sister died.

Shelter residents who embraced Settle at an informal prayer vigil last night said Simpkins was ejected from the facility by staff on Tuesday morning after being brought there by the University of Maryland Medical Center Midtown.

“I saw her out here lying down after she was put out. I thought she was asleep,” Wendy Bryant said, noting that people impaired by drugs or alcohol frequent the area.

“They brought her here with her hospital socks still on,” Settle said she was told.

Hoping to get answers at the shelter, whose formal name is the Weinberg Housing and Resource Center, Settle entered the building after the vigil concluded.

A staffer there “told me people leave voluntarily – against their own best interests – and they can’t stop them,” Settle said.

“Why would my sister do that? Why would she leave a place that is air conditioned and go out in the 90-degree heat?” she said, noting that her sister Karen had called her from University of Maryland Hospital on July 4, asking ‘Can you get me out of here?’”

“She definitely sounded in her right mind,” said Settle, who had been out of town when she got the call. 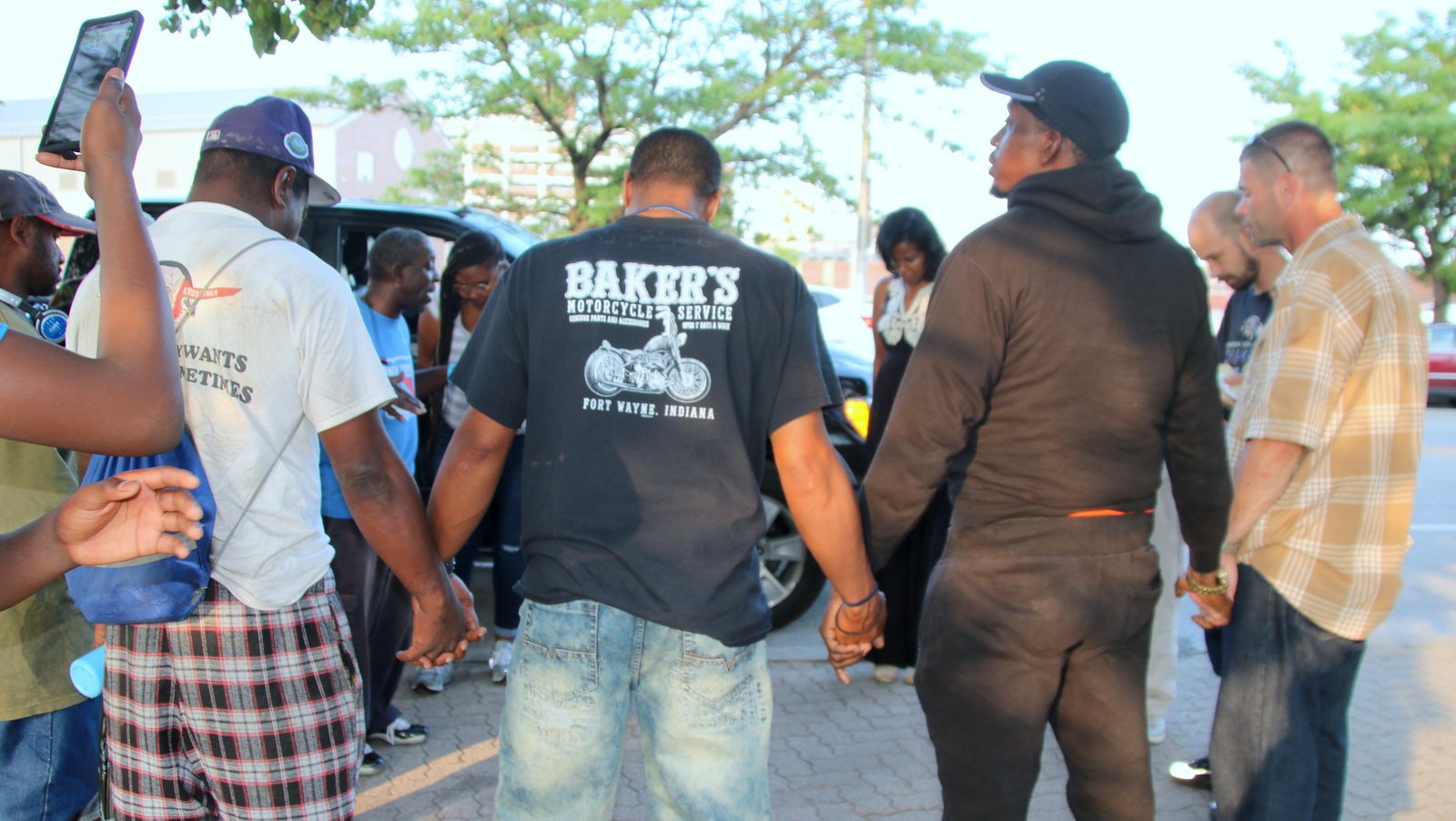 A group of about 20 people Friday joined hands at a vigil near the spot where Karen Simpkins died. (Fern Shen)

Settle said the shelter staffer pointed a finger at area hospitals. Staffers told her hospitals routinely drop homeless patients off in cabs – “dumping” them at the shelter even though it operates at capacity and cannot absorb them.

“They brought her here with her hospital socks still on,” Settle said she was told.

Her sister’s medical condition – and whether she left the shelter willingly or wanted to stay – was unclear last night, Settle said. But she has her suspicions.

“I read what happened to the woman they put out in the cold who was still wearing her hospital gown,” she said, referring to a January incident in which the University of Maryland Medical Center Midtown discharged a woman from its emergency room.

Video of the thinly-clad woman walking the street on a cold dark night went viral and led federal investigators to cite the hospital for violating patient rights as well as multiple medical regulations.

“Is that what happened to my sister on Tuesday?” Settle said. “Patient dumping?”

Police, city and shelter officials so far have released few details about the case.

Shelter staff who recognized her called to make a report at about 3:22 p.m., according to Baltimore Police spokeswoman Nicole Monroe.

The deceased woman was 58, African-American, and wearing a hospital bracelet and gown, Monroe said.

Her body was transported to the state medical examiner’s office. There was no sign of trauma, Monroe said. 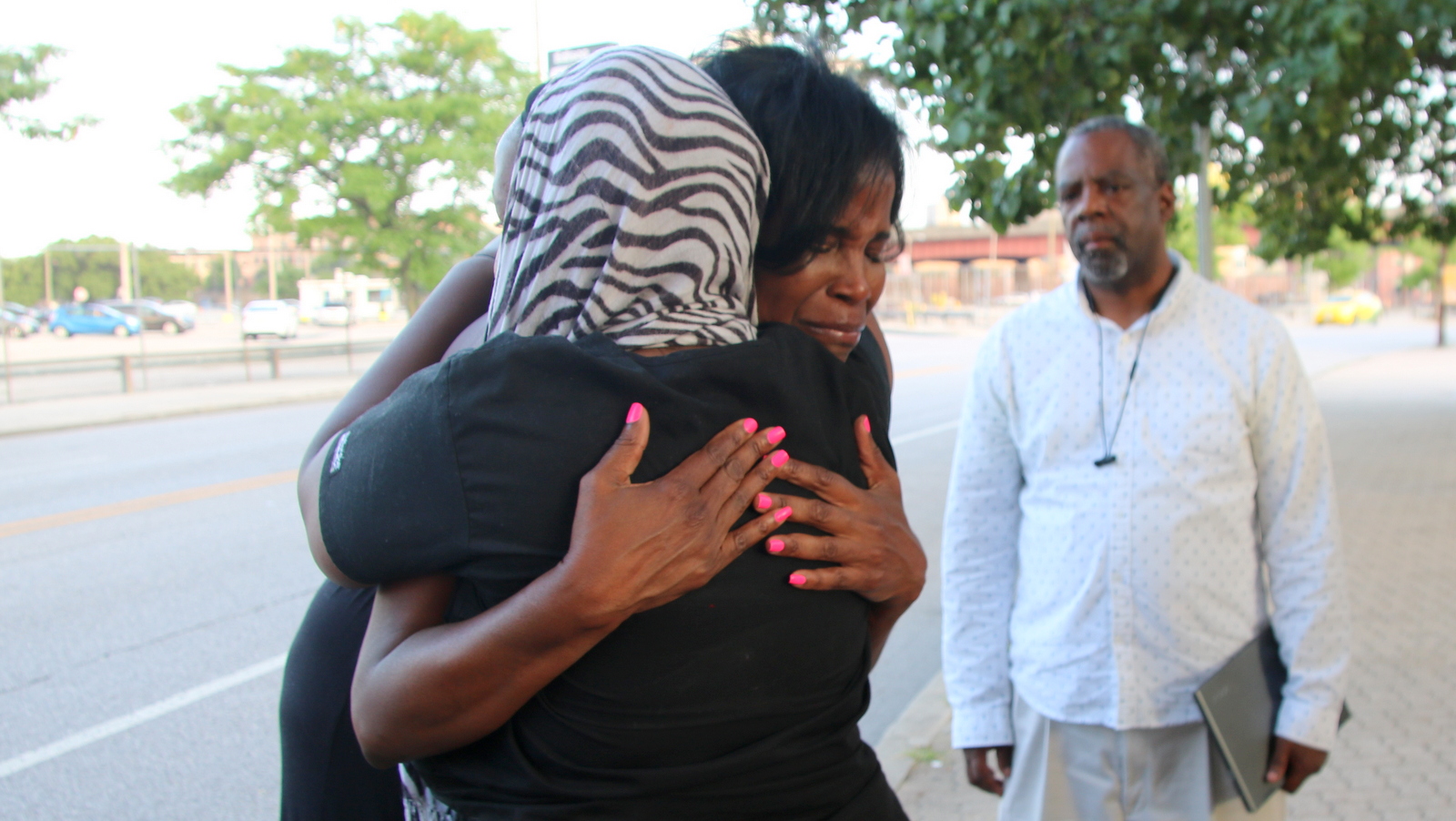 “I’m so sorry, baby,” this woman said, one of many people from the Fallsway area to offer condolences to Angel Settle on Friday. (Fern Shen)

Terry Hickey, director of the Mayor’s Office of Human Services, said the deceased woman was homeless and had been at the shelter, but he could not say when.

Hickey said the woman had fallen earlier in the week and was taken to the University of Maryland Medical Center. She was discharged from the hospital and returned to the shelter Monday night, he said.

Some additional details came from a brief statement to The Brew by Catholic Charities of Baltimore, which provides emergency shelter services to the city at the building at 620 Fallsway:

“The individual who passed had fallen outside in the area of Centre and Fallsway on Monday,” Christine M. Collins, director of communications for Catholic Charities, reported.

“Around 2 a.m. Tuesday, a cab brought the individual back [to the Weinberg Center] to drop her off,” Collins said.

“She stayed at the facility for a few hours. You will have to ask the hospital or family about her treatment, discharge and other medical questions,” Collins said.

Neither she nor Hickey answered the question of whether Simpkins left the shelter willingly.

On Friday, a spokeswoman for the University of Maryland Medical System promised to answer questions from The Brew, but so far has not done so.

“Wouldn’t let me see her body”

Settle, meanwhile, remains frustrated, in part over her interactions with the Office of the Chief Medical Examiner.

“I talked to the medical examiner’s office three times. I said, ‘I’m her sister!’” Settle said she told officials there. “They wouldn’t let me see or identify her body. They said it had already been identified.”

Bruce Goldfarb, a spokesman for the medical examiner, said people have a misconception about the office. By law, city police are responsible for identifying bodies, not the examiner’s office. And funeral homes are the place where next of kin may view a family member’s remains.

“We are a forensic medical center, not a funeral home,” Goldfarb said. “We don’t have comfortable chairs and grief counselors. We’re not set up that way.”

Nor is his office obligated to notify families that a loved one has passed away, Goldfarb said.

“In 2016, we had some 5,600 autopsies. Multiply that by the number of family members who might want to be informed,” he said. “We’d have to have a huge staff to do it. It’s beyond the capability of our office.”

“We are a forensic medical center, not a funeral home,” Goldfarb said.

That issue was raised earlier in the week by the family of another homeless person who died outside in Baltimore. Lawrence Alexander’s mother and siblings complained that they were never notified of his death next to a bus bench outside of City Hall a year and a half ago.

• Loved but lost, Lawrence Alexander is returned to his family.

If not the medical examiner, who is responsible to inform the next of kin of a homeless person’s death?

“You’d have to ask the police that,” Goldfarb said. “I don’t know what they do or who they typically notify.”

The Police Department was where Settle was told to seek answers about her sister’s death.

She said she was told “I have to talk to a detective there,” but was then informed that the detective was on vacation.

“So now I have to wait for him to get back from vacation.” 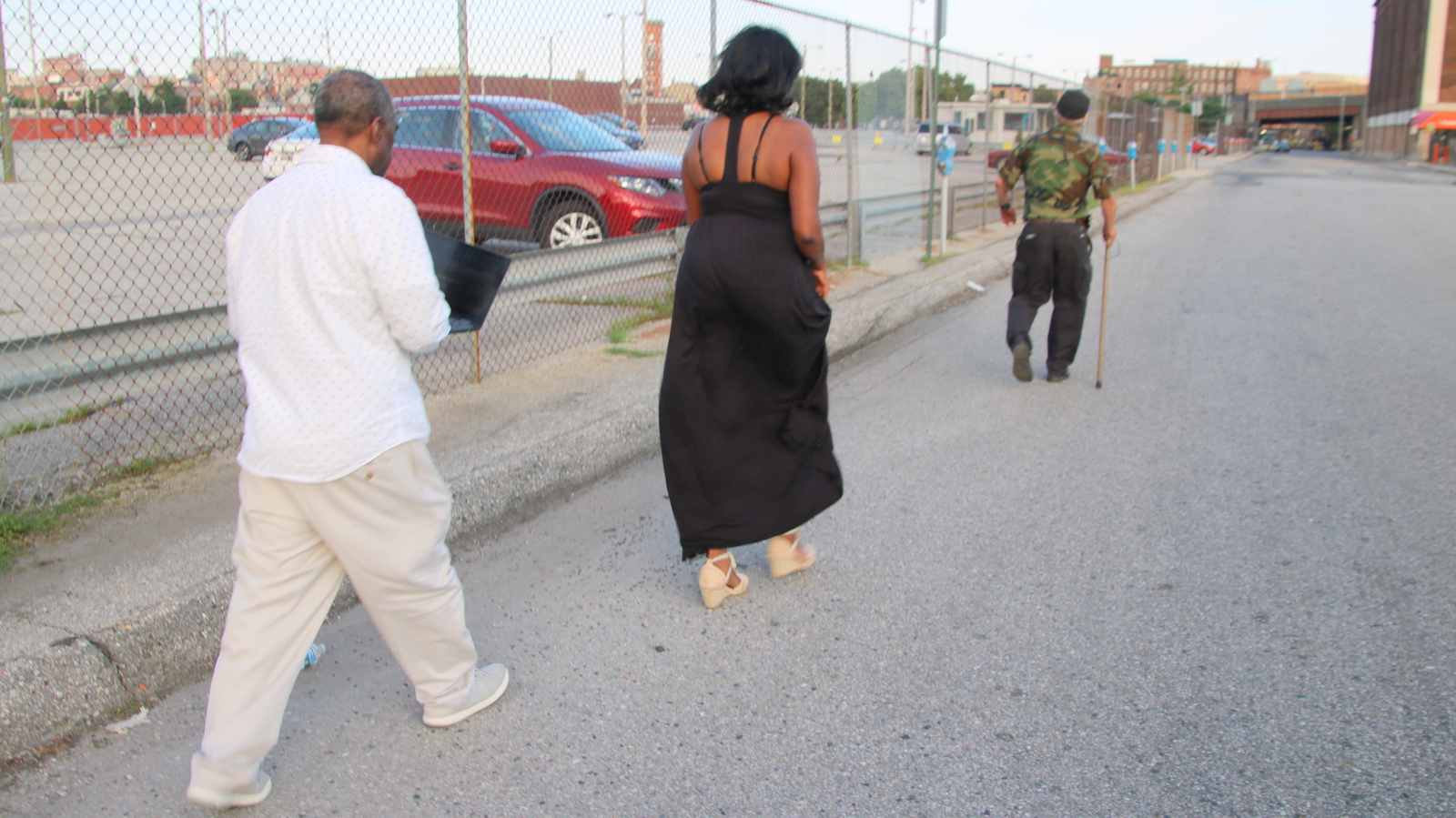 Angel Settle follows a man to a distant trash can where he said he saw someone throw her sister’s purse on Tuesday. They picked through the trash but never found it. (Fern Shen)