Mohammed Saif was with the Baltimore Marriott Waterfront hotel when it opened in 2001, working as a server in the hotel’s restaurant.

After leaving in 2005, he returned in 2010 and, following eight consecutive years with the hotel, the 56-year-old Saif said he now earns the maximum wage for a restaurant server:

Even with tips, Saif has needed to work other jobs, including at a convenience store, to make ends meet for his family.

Now Saif and other workers at the Marriott waterfront hotel in Harbor East are saying they’re fed up with low-wages, unpredictable hours, and feeling financially insecure despite working multiple jobs.

Onlookers stopped on the sidewalks and assembled on nearby balconies along the densely populated street to watch the crowd of several dozen protesters march with signs in front of the Marriott’s main entrance at 700 Aliceanna Street.

Asking for a “fair process” to decide on a union, employees at the Marriott Waterfront hotel said that they want an opportunity to raise the question of unionizing without being penalized by management.

“We respect their right to choose”

Julie Codus, Director of Sales and Marketing at the Baltimore Marriott hotel, said that workers wouldn’t be punished for speaking out.

“Marriott is a company that values the contributions of all our associates, and we respect the right of people to voice their opinions,” Codus said, in an email.

“We believe the secret ballot election process administered by the NLRB provides a fair process for employees to decide whether they want to be represented by a labor union or not,” she said. “We will continue to respect our employees’ right to choose.”

Marriott International became the largest hotel chain in the world after it acquired Starwood Hotels & Resorts Worldwide in 2016 for $13.6 billion. The company has its international headquarters in Bethesda, Md. and has enjoyed large profits in recent years, generating roughly $22.9 billion in revenue in 2017.

Unite Here Local 7, which represents employees at several other hotels in the city including the Hyatt Regency, accused the Baltimore Marriott of failing to produce good, living-wage jobs for Baltimore residents despite receiving significant tax breaks from the city government.

The Baltimore waterfront hotel received a payment in lieu of taxes agreement, or PILOT, from Baltimore City prior to opening in 2001.

In accordance with the PILOT’s terms, the high-rise property on the water’s edge in the heart of Harbor East only pays $1 in property taxes per year for 25 years. That amounts to $61.5 million dollars in lost potential revenue for the City over the 25 year period, which ends in 2022.

Some staff expressed concerns that their hours might get cut in retaliation for discussing the option of joining a union with others or, worse, that they might be fired.

Losing hours is a serious concern of Marriott employees who must work a full time schedule of at least 30 hours-per-week to stay on their employer’s coverage.

“I lost my healthcare in February after my hours were cut,” said one Marriott banquette employee, who asked not to be named due to fear of possible employer retaliation.

“It’s not just about the money,” she added. “It’s about respect and dignity.” 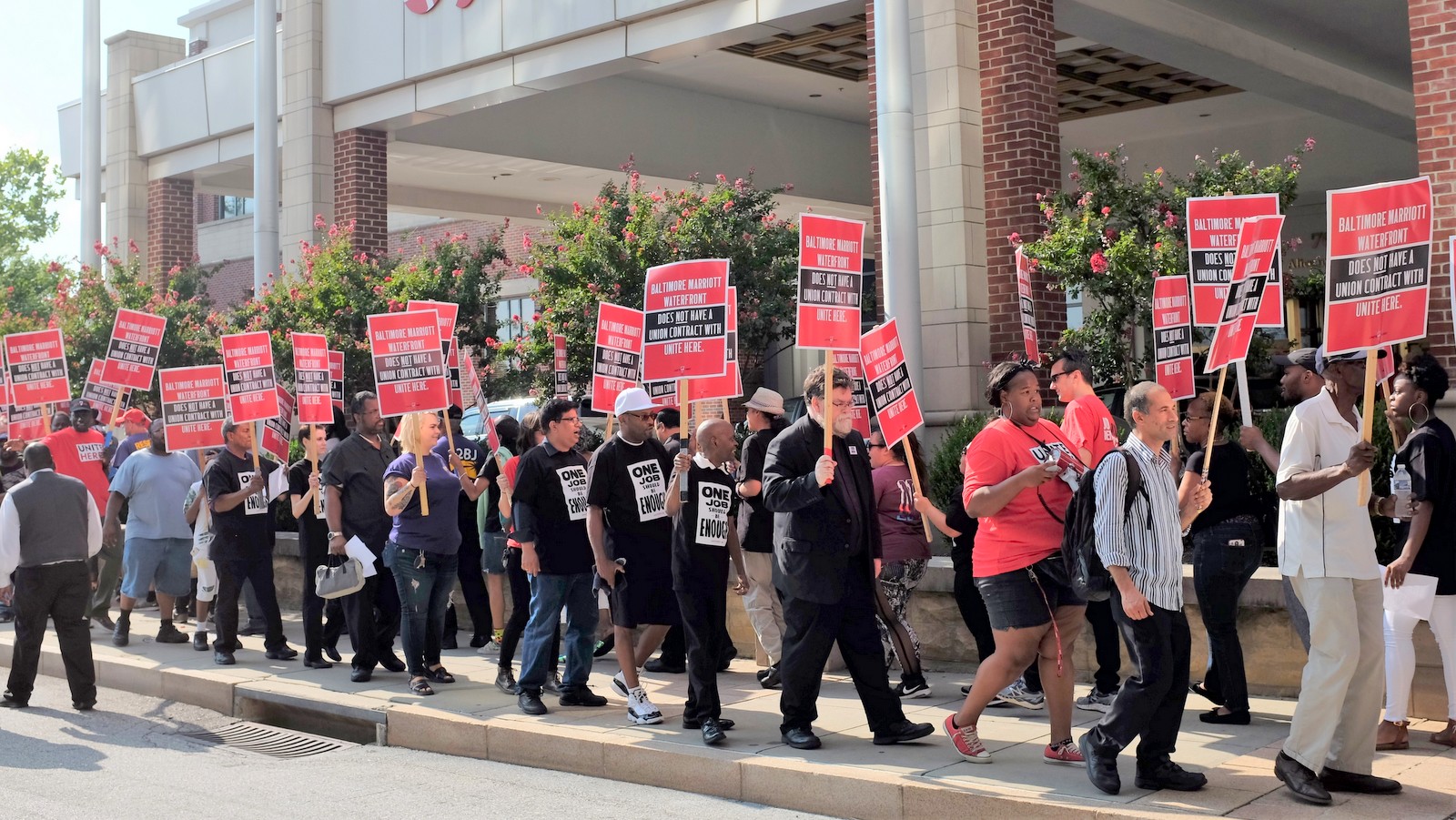 “One job should be enough!” Marriott Waterfront Hotel workers and their supporters chanted yesterday. (Michael B. Jefferson)

She expressed hope that joining a union could lead to greater transparency from management, specifically about the way that hours are allocated.

“My health insurance was cut off last quarter and I can no longer afford to take the medicine my doctor prescribed” said Alex Dame, a 48-year-old Marriott banquet server since 2010.

“If I don’t average at least 30 hours a week in the next quarter, I’m going to have to postpone the surgery I need,” Dame added.

“I never thought I would be in this situation, but here I am.”