Last week, the Independent Review Board (IRB) concluded that Detective Sean Suiter ended his own life by shooting himself in a vacant lot on Bennett Place on November 15, 2017.

The panel’s report provides a timeline of events that relies heavily on the testimony of Baltimore Police Department (BPD) witnesses, especially on Suiter’s partner of that day, David J. Bomenka.

A 10-year veteran of the force earning $98,000 a year, Bomenka is depicted in the report as a reliable witness, with one major exception:

Despite this inconsistency, the IRB generally accepts Bomenka’s testimony as fact.  He is the only source for crucial parts of the timeline of events and for the report’s assertion that Suiter was on the verge of suicide that day.

At the same time, the report omits important audio and video evidence, including 911 and dispatch calls. The video evidence that the report does include is frequently over-interpreted to fit its narrative.

The result is a report that often asks the public to trust subjective interpretations, while limiting access to objective, first-hand evidence.

One glaring omission in the IRB report is Bomenka’s 911 call after Suiter was shot. Here is how the report describes the call:

Bomenka did not see anyone other than his fallen partner, nor did he see anyone fleeing the area. He then ran west on Bennett Place, crossed Bennett Place to the north side, and called 911 at 4:36:51 p.m. from the northeast corner of Bennett Place and Schroeder Street. . . Within one minute, at 4:37:55 p.m., the 911 operator activated a “Signal 13” (officer down) alert.

Surveillance video released by BPD shows Bomenka run across Bennett Place, but he falls out of frame before making the call.

The report provides a lot of detail of the moments around the 911 call while leaving out a transcript or even description of the call itself.

Dispatch audio files obtained from Broadcastify reveal how the dispatcher described that call:

Be advised in reference to the signal 13. It says, call reported that his partner got shot. No description of the suspect. No further. Be advised. It came in with a name. It said “off-duty.”

Did Bomenka not provide his identity to the 911 operator? Did he say he was “off-duty”?

The IRB report says that he was on-duty. Unless Bomenka’s 911 call was misinterpreted by the dispatcher, this is a contradiction that could undermine his credibility. None of this is discussed in the report.

By releasing the full audio of the 911 call, BPD could clarify what Bomenka told the dispatcher. The audio could also confirm that Bomenka himself made the call. 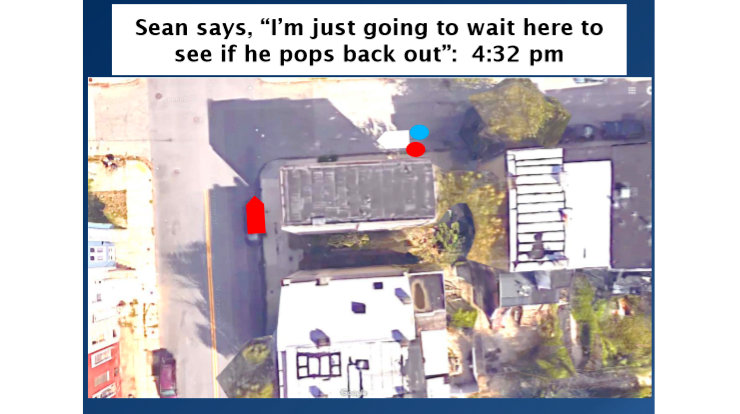 According to the report, the IRB panelists “listened to radio and 911 transmissions.” Yet the report omits any mention of radio communications except for Suiter’s last call before he was shot.

This is a striking omission.

Dispatch calls provide real-time narration of police events. They confirm when things happened. Their importance was well-known to CNA Consulting, the Virginia-based company that wrote this report.

CNA had addressed dispatch communications issues in a report for BPD before, regarding the 2011 shooting death of Officer William Torbit.

The report also leaves out how Bomenka seems to have provided multiple descriptions of a possible shooter on foot later that evening, including: “black male” in a “knit-style baseball cap.”

Some police and fire dispatch calls were available through the scanner archives at Broadcastify. They tell a somewhat different story than the IRB report.

For instance, while the report points out that Bomenka could not provide information to responding officers at the scene, it does not mention how much chaos this created, with officers told to “take cover” in case the shooter was a sniper for several minutes.

The report also leaves out how Bomenka seems to have provided multiple descriptions of a possible shooter on foot later that evening. One of these was a “black male” in a “knit-style baseball cap,” called out in a citywide dispatch alert around 5:36 p.m. in reference to Suiter’s shooting.

Then, later that night, then-Commissioner Kevin Davis said they were looking for a “black male” in a “black jacket with white stripes,” which he later said came from Bomenka.

The report cites how the patrol officers transporting Suiter to the hospital got into a car accident at Baltimore Street and Martin Luther King Boulevard.

But it leaves out how the officers failed to communicate their route to the hospital, leaving police dispatch confused about which streets to shut down. Fire dispatch is heard sending trucks and ambulances to “locate the officer.”

The patrol car ended up colliding into a University of Maryland police car that was helping clear a path. An SUV and two pedestrians were also hurt.

Here, as elsewhere, the IRB report omits or minimizes information that would cast too much judgment on the action of rank and file officers besides Suiter. 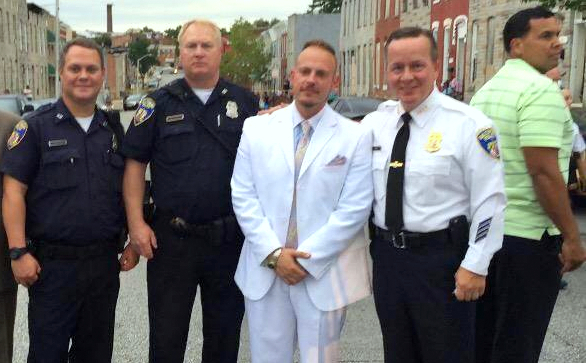 David Bomenka (in white summer suit) is congratulated by then-Police Commissioner Kevin Davis in 2015 for apprehending a suspect in a high-speed car chase. Bomenka was working as a plainclothes detective in southwest Baltimore when he spotted the suspect’s car crashed into a vacant rowhouse. (@BmoreBloc)

The IRB report calls the surveillance video of Bennett Place “one of the most important pieces of evidence in the case.”

Released by BPD, the video is “grainy” and “out of sync” by “eleven hours and four minutes.” The panel relied on a BPD officer to confirm at what time the video actually did occur.

The video does not confirm all of the report’s descriptions of it.

The report claims to identify Suiter and Bomenka on the video, when it actually shows two unidentifiable human-shaped dots in the distance. A close-up version is very blurry; the dots become splotches. 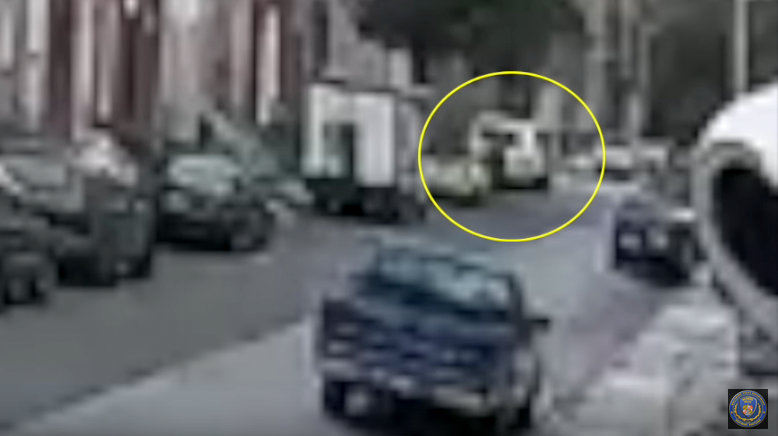 Still from a video, included with the report, that allegedly shows Suiter moments before he went into the alley. (IRB Final Report.)

The report states, “Detective Suiter was holding his police radio in his left hand” just before he “ran towards the lot.” It’s not possible to make out anything in the hands of the splotch identified as Suiter.

The surveillance video is very important to the IRB’s finding of suicide.

The report describes Suiter “pacing” behind a white van before running into the lot. Over the next nine seconds, it states, Bomenka ran “about sixty feet” from the other opening to the lot, on Schroeder St., “to where he could view Suiter.” Then he crossed Bennett Place to call 911.

The report concludes: “All of the actions that led to Suiter’s death could have only taken a couple of seconds at most,” which, it asserts, was not enough time for someone to take Suiter’s weapon and shoot him.

This analysis assumes that Bomenka accurately reported his whereabouts as “about sixty feet” from Suiter. It also assumes that Suiter was “pacing” and not, say, already engaged in a confrontation with an assailant just off screen in the lot. Any interpretation of a blotch moving back and forth is speculative.

This surveillance footage was the only video of Bennett Place provided to the IRB, but there may be another video.

On March 15, 2018, convenience store owner Christopher Akpala, filed a complaint against BPD for taking his surveillance equipment after Suiter’s death and not returning it.

After he filed the complaint, Akpala said, police dumped the equipment back at his store, but the equipment no longer worked. (Online court records show a $1,000 judgment entered in Akpala’s favor last month.)

Akpala’s store is located at 901 Bennett Place, on the southeast corner of the block. It could have captured the north side of the street, providing visual confirmation of Bomenka calling 911 and corroborating the report’s timeline.

The IRB report includes several photographic stills from body-worn cameras (BWCs) worn by patrol officers responding to the scene. The police department has not shared the full videos.

At points the report provides a heavy-handed interpretation of the footage, noting, “The raw emotion and complete focus on saving a fellow officer’s life are painfully apparent in the BWC footage.”

The public’s trust in the BWC program has been greatly undermined in the last year by multiple cases involving evidence staging caught on camera.

Why didn’t the IRB interview Suiter’s wife, family or friends? And why didn’t it incorporate in its report the first Medical Examiner’s finding of homicide?

The pictures and descriptions of the BWC footage in the report bring up some questions, including:

How could Suiter maintain a grip on his radio when a bullet went through his brain?

How would the gun have ended up under his body, if he shot himself towards the back of his head and fell forward, as indicated in the report?

In the days since its release last Tuesday, the IRB report has not earned widespread confidence from city residents, judging by the reaction on talk radio and social media.

The withering comments of citizens are fueled as well by other omissions, errors and questionable assumptions in the report that have emerged and bear detailed scrutiny. Among them:

• The fact that the board, which speculated that Suiter was distraught about his impending grand jury testimony, never interviewed his wife, family or friends.

• The board’s failure to incorporate into its findings the first Medical Examiner’s report – a document that labeled his death a homicide, a conclusion now under review.

• Several glaring mistakes in the report, such as saying that Gun Trace Task Force member Daniel Hersl pleaded guilty and cooperated to possibly implicate Suiter. (Hersl, in fact, stood trial in February and was convicted of racketeering, robbery and other charges.)

Releasing more audio and video evidence would be one way for Interim-Police Commissioner Gary Tuggle and Mayor Catherine Pugh to convince the public to accept the IRB’s conclusion of suicide.

As it stands now, we still don’t know what really took place on Bennett Place last November 15.
_______________________________
Justine Barron  is a writer, investigative journalist and nonprofit consultant. She was one of the investigators and hosts of the 2017 podcast “Undisclosed: The Killing of Freddie Gray.” She is on Twitter at @jewstein3000.