Linda “Lu” Pierson says that Question  G – the controversial referendum issue that would tether the director of Legislative Reference to the mayor and City Council president – would also have a negative impact on the Ethics Board she has chaired since 2010.

“The way our board is now structured is about as neutral and independent as you can get. Question G has the potential of making the board less independent,” she told The Brew.

The reason is arcane even by City Hall standards: the director of Legislative Reference is also the chief advisor to the Ethics Board.

By making the director of Legislative Reference an “at will” employee of Mayor Catherine Pugh and Council President Bernard C. “Jack” Young – as Question G does – that same employee is placed in a very awkward position on the Ethics Board.

“Our director may be faced with having to handle an ethics complaint against one of the two people who appointed him,” Pierson said.

This can’t happen at present because the director of Legislative Reference is appointed by a special board with non-political members, such as the president of Johns Hopkins University, and is protected by civil service regulations that bar arbitrary firings.

Rule Against Your Boss?

The potential for future conflict is not theoretical.

Over the summer, Mayor Pugh pressed the Ethics Board to exempt her office from the requirement of getting prior approval before soliciting money from private parties, especially from “controlled donors” who do business with city government.

• MORE: A legal scholar caught in the quicksand of a City Hall power grab

Pugh argued that a blanket ethics waiver would allow her to accelerate her efforts to raise private funds to combat homelessness, support educational programs, fight crime and enhance recreational opportunities for children.

In September, the Ethics Board concluded that it could not grant her “a plenary waiver of its standard, citywide restrictions and procedures for solicitations of this sort.”

The opinion was written, according to Pierson, by Avery Aisenstark, whose job status is under threat by Question G.

Which raises this question: Would a future ethics advisor opt to make a similar ruling? 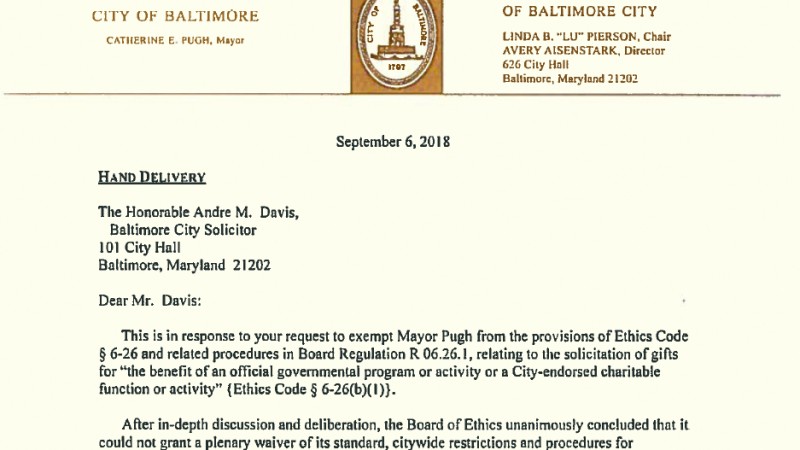 Excerpt of letter denying Mayor Pugh’s request for blanket exemption from ethics rules that bar city employees from raising money for charitable causes without prior approval. (Baltimore Ethics Board)

Aisenstark has been the advisor to the Ethics Board and director of Legislative Reference since 1996. Over the years, he has raised the hackles of some elected officials.

In late 2012, Aisenstark was asked to draft three versions of an ethics bill under consideration by the City Council. One of the bills was favored by Council President Young. Another had the support of Pierson and the Ethics Board, according to City Paper reporter Edward Ericson Jr.

Young engineered his version of the bill through the Council, but not before, reportedly, privately raging against Pierson and Aisenstark for backing a more restrictive bill.

Young and Pugh were the chief architects of Question G – Young got the Council to pass the ballot initiative, and Pugh established a charter review commission that zeroed in on Legislative Reference as a target for “reform.”

Pierson said the board has not taken a formal position on Question G, but she voiced her concerns about the measure – to no avail – in a meeting with Pugh’s senior staff.

If Question G is approved by voters next Tuesday, Aisenstark will be required to submit his resignation by January 1, 2019.

At that time, an “ad-hoc committee” appointed by Young, Pugh and Comptroller Joan Pratt will make recommendations as to who should be the next director of Legislative Reference – and, by extension, chief advisor to the Ethics Board.

And who makes the final determination?

“The Mayor and the President of the City Council are required to jointly appoint and remove the Director of Legislative Reference,” specifies Question G.