A good-government compromise? A win-win situation?

If that’s what you’re thinking, members of the City Council, as you vote this Monday night on a bill to eliminate “source of income” discrimination against rental housing applicants – you’re thinking about it all wrong.

You are not compromising between value-neutral interests if you support last-minute amendments being pushed by rental housing lobby interests.

Council Bill 18-0308, sponsored by Councilman Ryan Dorsey, aims to protect city renters by prohibiting discrimination in housing based solely on source of income.

It requires landlords to judge potential tenants in an equitable manner and bans the common practice of refusing to rent to families enrolled in the Housing Choice Voucher (HCV) program, formerly known as Section 8.

But opponents – basically, landlords – now want a 20% cap on the number of units to which this legislation would apply. And they have framed this limit as wise public policy that would avoid the unintended consequence of further concentration of poverty.

If you flip their assertion around, you’ll find that what they really want is a discrimination allowance.

The amendment would permit landlords not only to use housing voucher assistance, but also child support, alimony, disability benefits or other non-employment-based sources of income as a reason not to consider an otherwise valid rental housing application.

Who are the people who, if they happen to be among the unlucky 80%, would be subject to the landlord’s legal thumbs-down?

Most are people of color or people who are elderly, disabled or have special needs. Currently, landlords use the rejection of vouchers as a proxy to discriminate against them.

For such vulnerable populations, finding affordable housing is extremely daunting. HUD’s study of landlord acceptance of HCV holders found that they must try up to 39 units before they find one that will accept their voucher.

And when they do find an opening, they still face resistance. Studies show, for instance, that landlords are more likely to miss appointments with voucher holders.

These practices contribute to the burden on families using vouchers and lead to a sense of hopelessness. 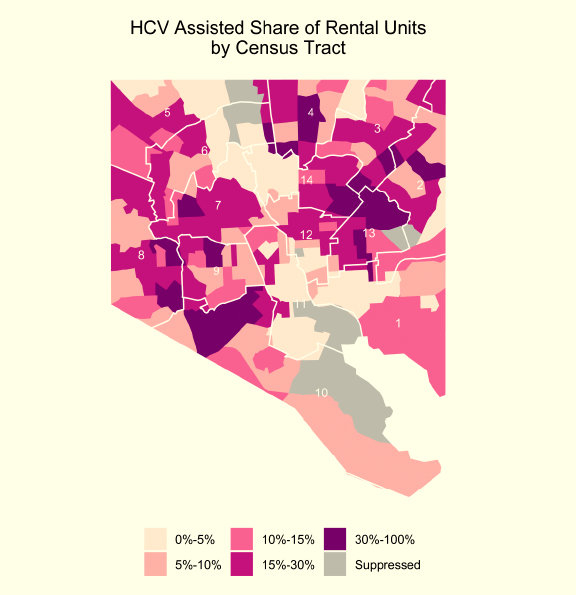 In Baltimore, the highest percentage of Housing Choice Vouchers is found in the same eastside and westside “black butterfly” neighborhoods with the lowest levels of economic opportunity, education and community health. This map breaks down HCV holders by census tract and council district. (Baltimore Regional Housing Authority)

Proponents of the discrimination allowance will argue that without limits to equity and fairness there will be a concentration of poor folks flocking to areas already overburdened with poverty.

Again, that’s the reverse of what has happened elsewhere.

The 75 jurisdictions across the country that have enacted source of income protections have opened up housing and economic opportunities.

In a 2014 study examining whether voucher holders in jurisdictions with source of income anti-discrimination laws were more likely to move to high poverty or low poverty areas, authors Freeman and Li found that low poverty areas with a larger white population became the neighborhoods of choice.

When we as a society determine that providing rental housing assistance is a priority, we should give equal weight to ensuring the usability of those resources.

Ensuring that every voucher holder has access to quality housing units without discrimination will help to improve the health and welfare of children and families.

All parties agree that Baltimore’s attempt to redress its history of extreme housing segregation through inclusionary housing has failed.

Passage of a clean bill that bars source of income discrimination would be  a step forward on this front. It’s something that many of our peer jurisdictions – including Washington, D.C., Philadelphia, Chicago, New York City and Boston – have already done.

We have an opportunity to improve the lives of our most vulnerable residents by outlawing this form of discrimination. Let’s not squander it by gutting Dorsey’s bill.

Today, landlords can discriminate against rental housing applicants 100% of the time.

If the legislation is amended as the rental housing lobby proposes, landlords will be able to discriminate 80% of the time.

Discrimination in any form should not be allowed. Access to opportunity needs to be supported with every tool available. It is the job of the City Council to ensure that those tools are in good working order.
______________________
Lisa R. Hodges is chair of the housing committee of the Baltimore City Chapter of the NAACP. Rev. Kobi Little is president of the civil rights organization.