Legislation to authorize a private police department for Johns Hopkins University may be sailing through the General Assembly in Annapolis, but its opponents in Baltimore are counter punching with gusto.

Yesterday three members of the 45th and 46th District delegations got a grilling from residents at a storefront church in East Baltimore.

“We don’t need another police force,” said Diane Corbett. “If you vote for this, you’re against us and hurting the people who live here.”

“Why is it that this bill must be completed in one year?” asked Ernest Smith, a resident of McElderry Park. “There are many levels of confusion. Why don’t we take this thing and say, ‘Hold on, let’s step back.’”

Another man cited state Senator Antonio Hayes’ comment that the police bill was taking up too much time, preventing the delegation from addressing other important issues.

“That rubbed me wrong because this could be life or death to us,” he said, eliciting applause and shouts of “we don’t like how this is happening!”

Smith: I’m Against It

The Senate version of the police bill was approved Friday by the Judicial Proceedings Committee. It is expected to come before the full Senate this week, where passage appears assured under the backing of Senate President Thomas V. “Mike” Miller.

Yesterday’s meeting was convened by Cynthia Gross, the president of CARE, and Donald Gresham, president of BRACE, two community associations that represent neighborhoods near the Hopkins medical complex.

The focus of attention was on House Bill 1094, with dozens of questions hurled at freshman Delegate Stephanie M. Smith (45th) and 46th Delegate Brooke E. Lierman.

Smith said she planned to vote against the bill, while Lierman said she was leaning in favor.

“You can’t police your way to safety,” Smith said via speaker phone, apologizing that she couldn’t come to the Mercy Seat Church on Patterson Park Avenue because she was battling a cold.

“There are other avenues Hopkins could pursue, such as joining the state university police system,” she said.

Instead, “elite leaders like Michael Bloomberg,” the ex-mayor of New York and billion-dollar-donor to Johns Hopkins, are exerting pressure on legislators to let JHU become the only private university in Maryland to have its own police department.

“I wish this was a clean request for a police bill. Because that’s what they really want,” Smith said, referring to the various money inducements, such as funds for city youth programs, added to the measure.

Lierman said she was originally against the police bill, but the Senate has amended the bill to provide strict geographic limits on Hopkins patrols and included more accountability.

She vowed to make additional improvements to HB 1094 with fellow Delegate Luke Clippinger, who cited family commitments as the reason for not attending the meeting.

“I haven’t seen all of the latest amendments,” Lierman said. “If all of the amendments are adopted, I am inclined to support it.”

At tomorrow’s scheduled caucus, at least 9 of the 15 members of the city House delegation appear likely to vote for the bill.

If the House bill differs from the Senate bill, the two measures must be reconciled in conference committee before the bill can go to Gov. Larry Hogan, who says he will sign it.

The attacks that worry Hopkins officials the most have taken place inside the hospital grounds, not in the surrounding community.

Asked why JHU viewed the bill as so critical, Lierman said, “When Redonda Miller [CEO of Hopkins Hospital] has nurses who are getting attacked, when she feels she can’t keep them safe, that’s a concern for her.”

According to Lierman, the attacks of greatest concern to administrator have taken place inside the hospital grounds – not in the surrounding community – to which Baltimore Police have been slow in responding.

“They want to train their own workforce,” Lierman said, rather than be dependent on city police and outside security companies. 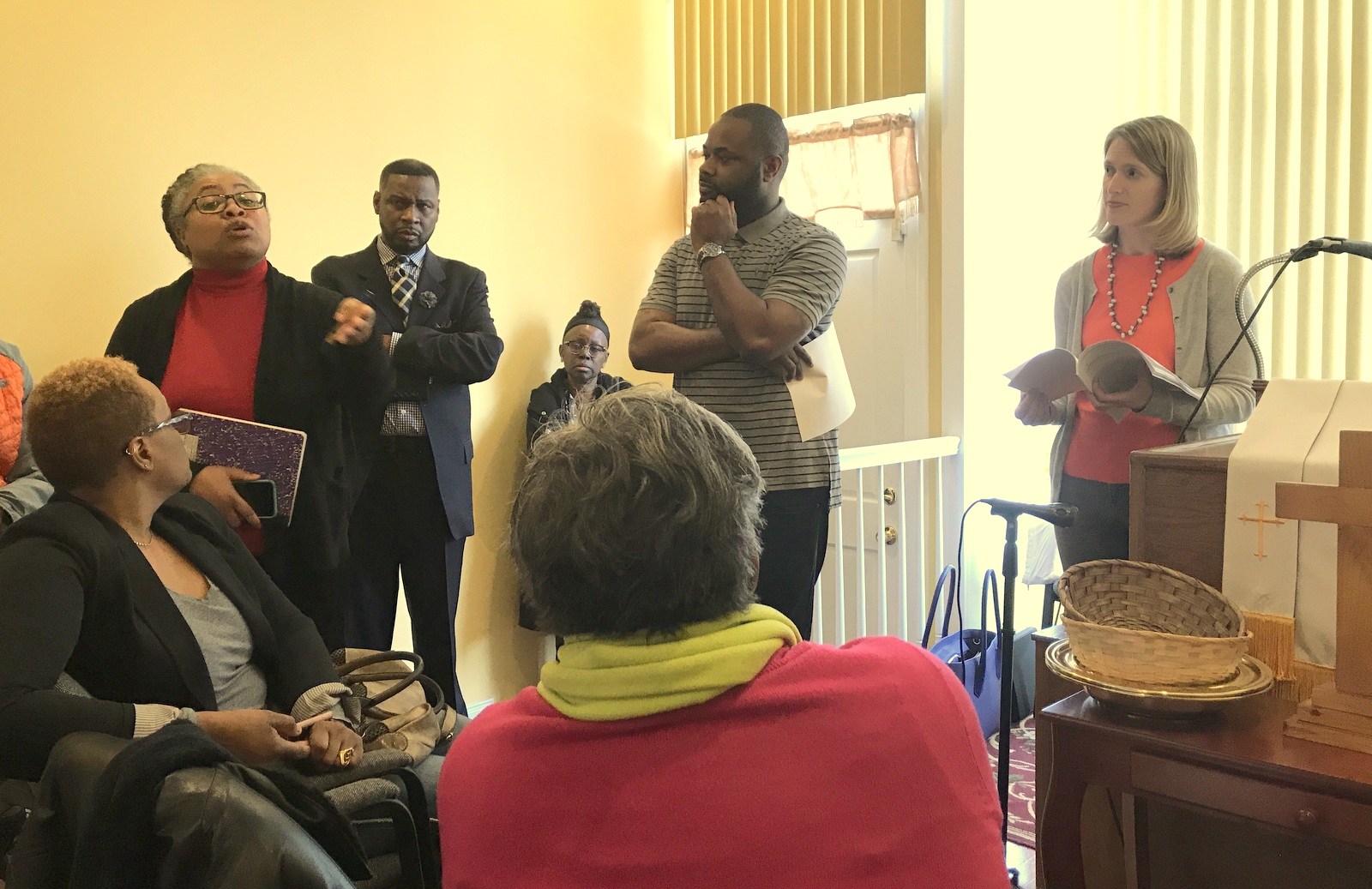 Cynthia Gross, president of CARE, said she is frustrated by the lack of information about the police bill. To her left are Senator Cory McCray (in striped shirt) and Delegate Brooke Lierman. (Mark Reutter)

McCray: “Trying to protect my folks”

A third politician, State Senator Cory V. McCray (45th), fended off some withering comments about amendments he had made to the Senate bill.

“I’m trying to protect my folks,” McCray said. Without his amendment, Hopkins could buy a building in Oldtown Mall, nearly a mile from its medical campus, and “patrol the whole area in-between.”

The amended Senate bill calls on the Baltimore City Council to “affirm” that residents in neighborhoods defined as part of Hopkins “campus areas” actually want the private force.

“If you want in, you can have the Hopkins police. If you don’t want them, they shouldn’t be in your neighborhood,” McCray said.

Councilpersons interviewed by The Brew said they had no knowledge of the “opt-out” until they read about it on this website.

“I’ve already asked, ‘How did this happen?’” she said. “And my second thought was, ‘How will this work?’ Do you take a vote through the community associations or take some other kind of vote of residents? And will the vote include the many students who live in these neighborhoods?”

“Right now,” Clarke continued, “it seems that, even if the bill gets passed in Annapolis, there will be a way for communities to take a pass.”

Another interpretation was given by Jillian Aldebron, an attorney whose Washington Hill home could come under Hopkins patrols in East Baltimore.

“When a piece of legislation is this unclear and this open to interpretation, it generally benefits the group that wants the power,” she told McCray.