Armed with bolt cutters and blowtorches, Baltimore firefighters and police officers smashed the glass on the front door of the Johns Hopkins University administration building and issued an ultimatum to protesters who have occupied the building for the past month.

“We’re giving you ample warning. You have amnesty. If you want you can walk away from this,” an officer can be seen saying, on the participants’ live feed this morning from inside Garland Hall.

But the occupiers, who were protesting the school’s private police force plan and ICE government contracts, held firm to their demand – that JHU president Ronald J. Daniels negotiate with them before they agree to leave. 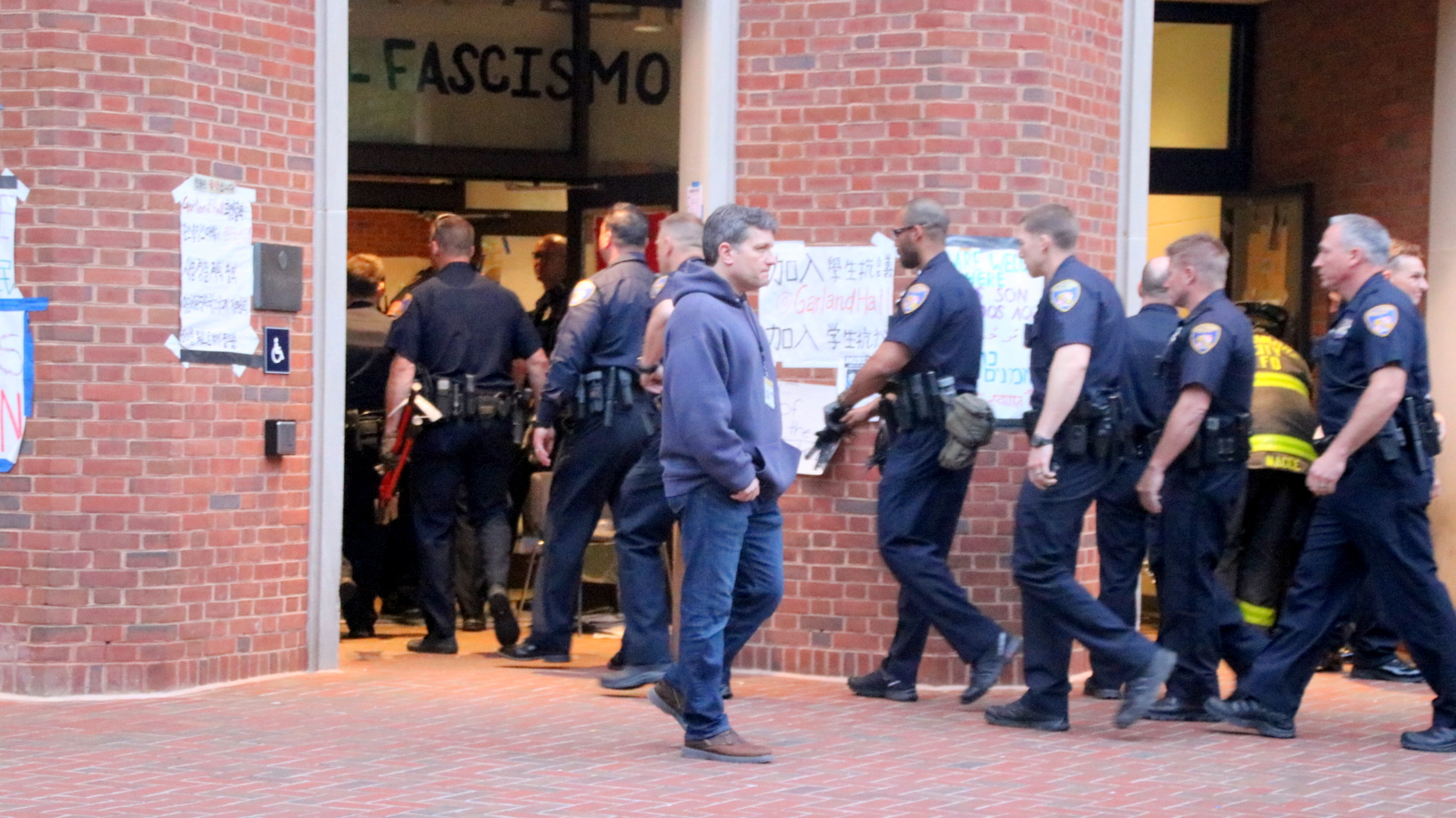 Meanwhile. Daniels, who has essentially been locked out of his office by the action, has said he would not meet with the students until they left the building.

“The university has gone to great lengths to support protest and free expression on campus, but the occupation of Garland Hall became a major safety risk and severely disrupted university services,” a spokesperson said in a statement circulated today.

This was a reference to the protesters’ ramp-up a week ago, when they took over the building – locking its doors with chains.

As day dawned, scores of police officers, who poured onto the North Baltimore campus overnight, surrounded the building. Community members and the media also gathered. Chanting could be heard inside the building and out, while a helicopter hovered overhead.

“We have said from Day One that we want to negotiate in earnest,” a voice replied to the officer issuing the ultimatum. “This is not in earnest – sending in police and threatening us.”

At about 5:30 a.m., the BPD arrested five people who had been inside the building: three community members, one undergraduate and one graduate student. Police said they were all charged with trespassing.

“We love you,” supporters yelled while the five were walked to waiting police vans, their hands cuffed behind their backs with plastic ties. “Black lives matter!” 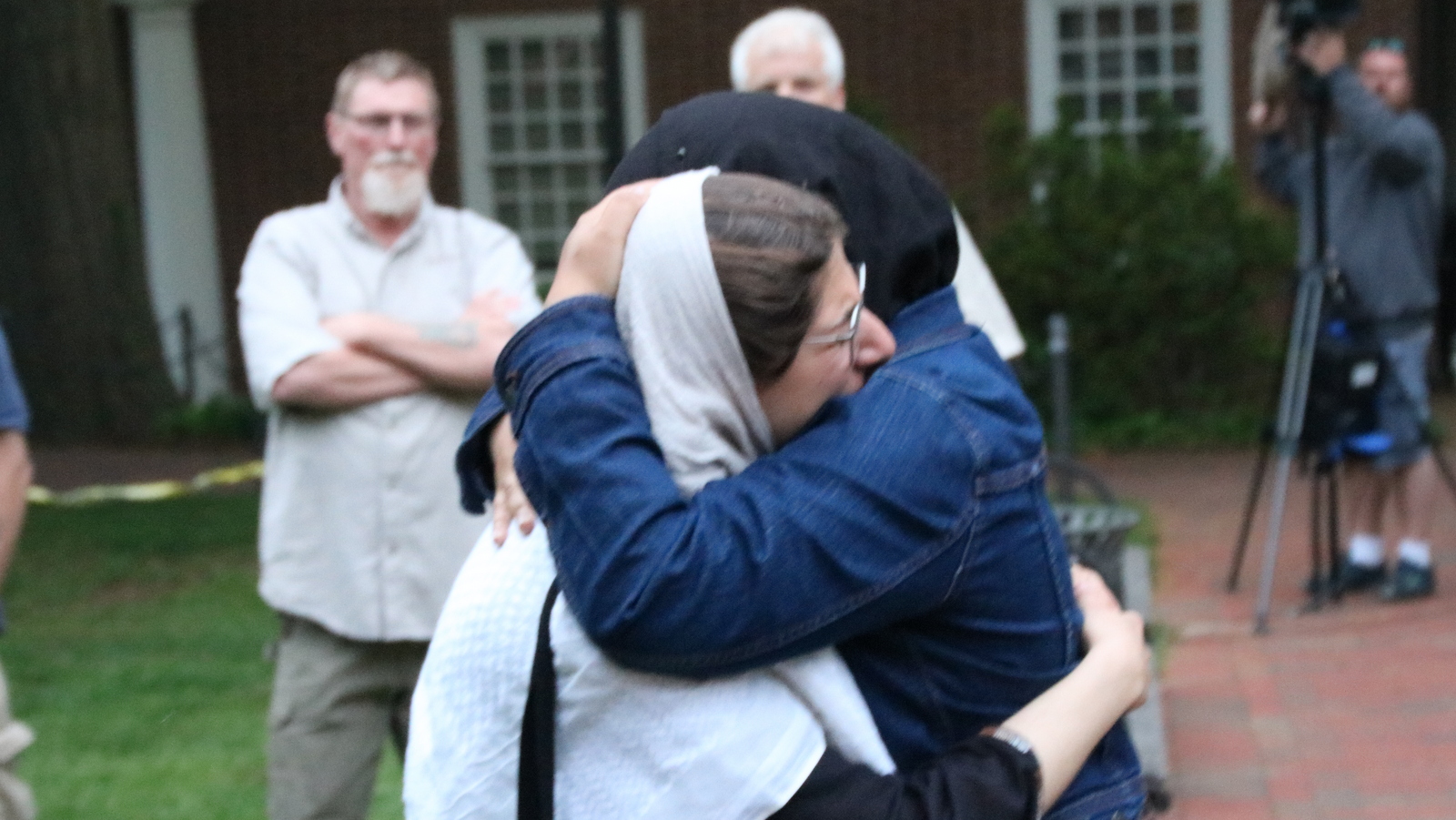 The scene outside Johns Hopkins’ Garland Hall, as police take protesters away in handcuffs. (Fern Shen)

Several people, in tears, embraced as police and reporters looked on.

But the arrests did not end there.

One of the five – Opal, a trans community member who identifies as a woman – was put into the men’s van.

Upon hearing this, people dashed behind Garland Hall to the place where the vans were being loaded. Opal was being misgendered, they said. Officers rebuffed them and the dialogue grew increasingly heated especially after one officer’s remark ignited outrage.

“Your friend is a man!” he declared brusquely.

“You don’t know shit about gender,” one person screamed back at him, as the angry crowd boiled up around the police. Two people lay down on the ground in front of one of the vans to stop them from driving away.

The two were arrested and charged with impeding vehicle traffic, police said. 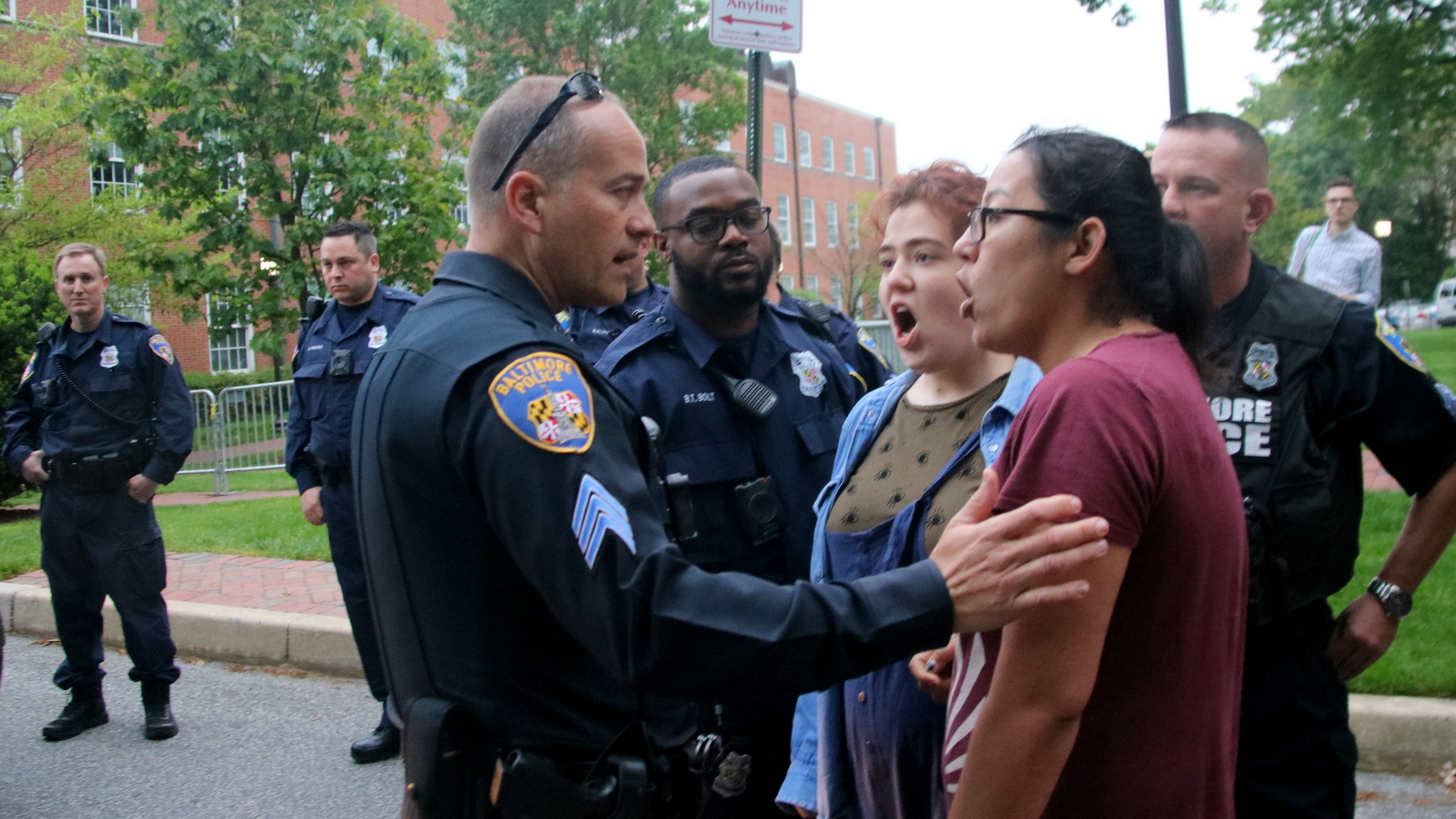 “Your friend is a man,” an officer tells two people complaining about the treatment of a trans woman. (Fern Shen)

Police said they warned the protesters multiple times and offered them academic and criminal immunity before the decision was made to arrest them.

Melba Saunders, a spokeswoman for the Baltimore State’s Attorney’s office, said in a statement that those arrested would not be prosecuted. 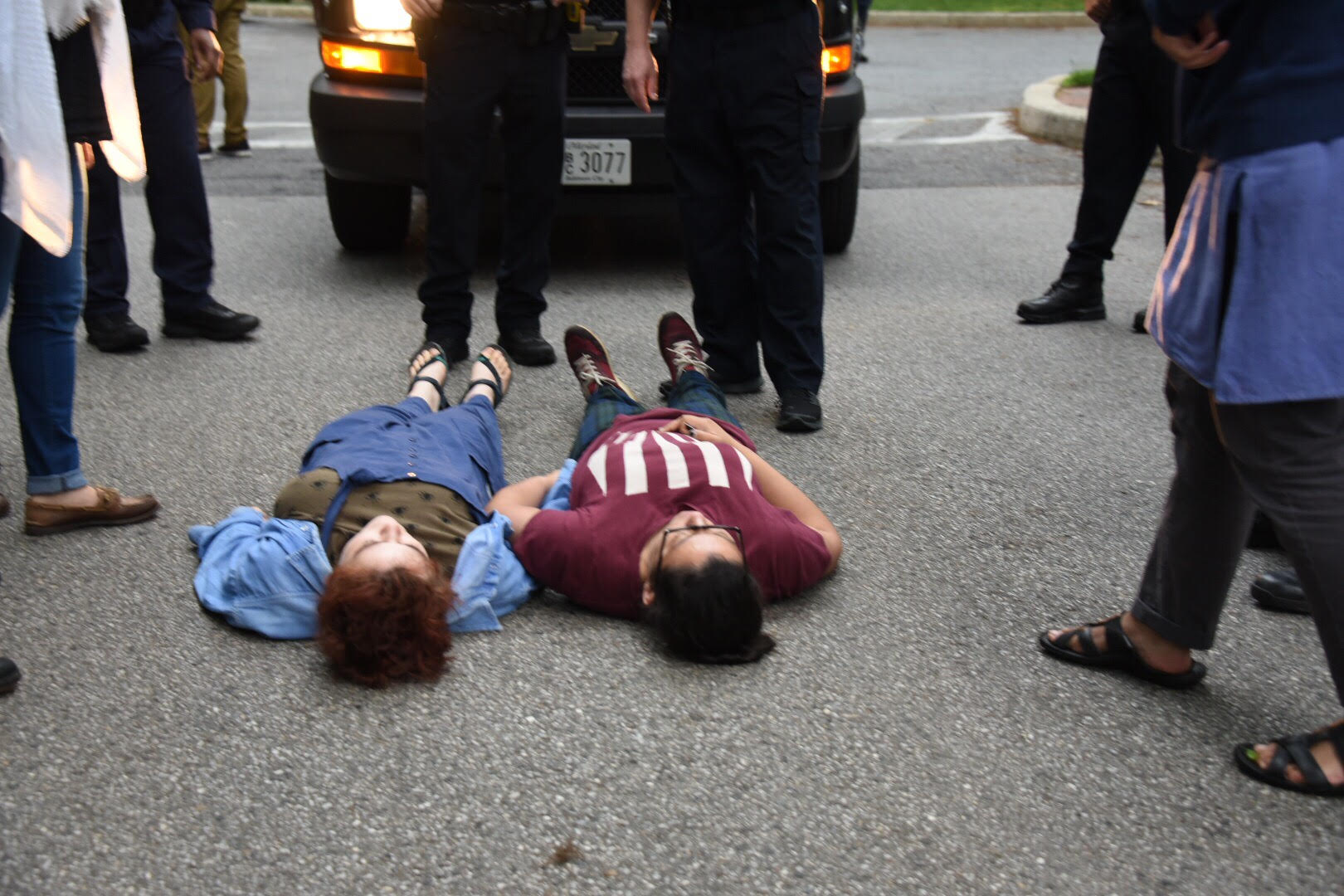 Two women, later arrested, lie down to protest a trans woman being transported in a van with men. (J.M. Giordano)

Councilman Zeke Cohen expressed concern about the treatment of the trans protester by arresting officers.

“Disturbed to learn that a BPD officer misgendered a trans woman,” Cohen tweeted. “Students have the right to protest. People have the right to be who they are. Today I will speak to Commissioner Harrison about this violation.”

The BPD has provided a comment The Brew has requested on the incident.

UPDATE: From a BPD spokesman:

“This morning it was brought to our attention that one of the arrestees from Johns Hopkins University was a transgender woman. The arrestee had been identified as a male by a drivers license. As soon as supervisors were made aware of the situation we contacted the Central Intake and Booking Facility to insure the individual was processed correctly.”

“We are currently reviewing the incident in its entirety to determine if corrective actions are needed.. The Baltimore Police Department has ongoing training to ensure officers treat all members of the community in a respectful, professional and appropriate manner.”

Hopkins officials released a statement, stressing their commitment to “freedom of expression, which lies at the core of academic life.”

“We had hoped to find a constructive means to resolve this increasingly dangerous situation and we are disappointed that the decisions of the protesters necessitated a law enforcement response,” the statement said.

The BPD also released a brief statement recounting the morning action (“At 5:50 a.m., at the request of Johns Hopkins University, Baltimore Police officers reopened Garland Hall”). It noted that “there were no injuries reported during the arrests.”

Students and others who had participated in the Garland Hall protest spoke to the media as police officers returned to their vehicles.

“I don’t want those people to have guns because I know who they would use them against – and that is me.”

Karter James Burnett, a Hopkins junior, talked about what got him involved in the protest a over a year ago.

It was “when we suddenly received word they were creating a process of starting a private police force,” Burnett said, “on a campus where security is already everywhere, where students already felt safe and where any violent crime was almost non-existent.”

Jamie Grace Alexander said the incident involving Opal illustrated one of the points critics of the police force plan have made: that an armed Hopkins police force would lack accountability.

The BPD had ostensibly agreed to treat trans people respectfully according to Alexander, who said she represents Baltimore’s trans community.

“We’ve been at the table with police, and we’ve seen it get us nowhere because there is no apparatus whereby police hold themselves accountable,” said Alexander. “And we’ve seen that demonstrated here today.”

Speaking of the yellow-jacketed Hopkins security guards, Alexander said “I don’t want those people to have guns because I know who they would use them against – and that is me.” 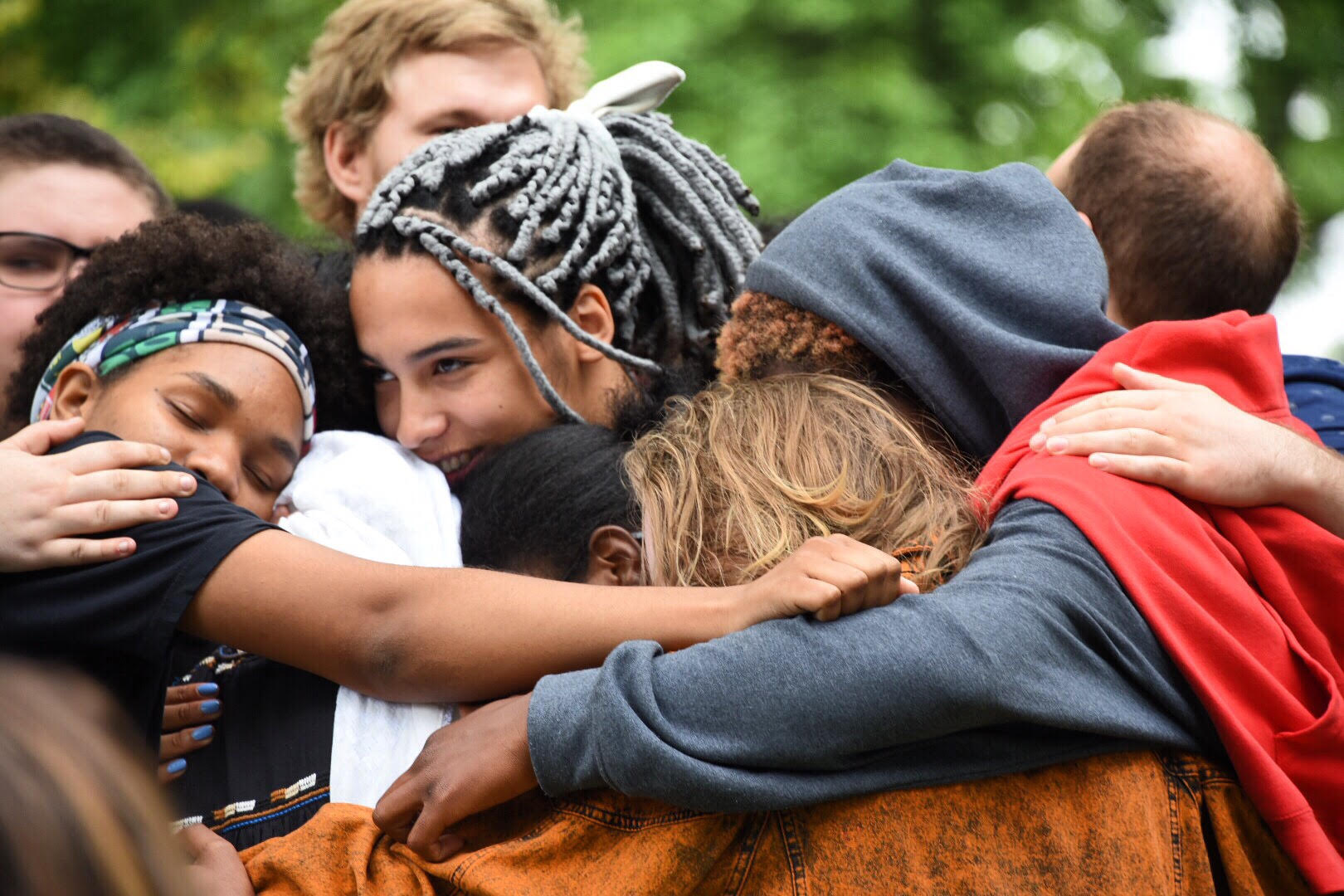 As police leave campus and their press conference concludes, participants in the Garland Hall sit-in come together. (J.M. Giordano)