Rallying against legislation allowing Johns Hopkins University to create an armed private police force  – on the day the bill takes effect –  about 150 activists gathered yesterday at Wyman Park, on the edge of the Homewood campus.

Among the speakers was a Hopkins physician who attributed the University’s rebuff of criticism of its police force plan (and its contracts with ICE) to the prestigious institution’s self-image.

“When we start thinking that what we’re doing is good because we’re doctors – evil lies that way,” said Zackary Berger, an associate professor at the School of Public Health. “You have to do good first.”

“Private police,” Berger said, “is Hopkins saying ‘You know, we hear your concerns about police, we hear that police racially profile and they shoot innocent people – but it’s gonna be okay because we’re Hopkins.’”

“And the contracts with ICE,” he said, “is about  ‘We hear what you’re saying about ICE putting kids in concentration camps – but it’s okay because these are faculty members at Hopkins.”

Speaking with The Brew afterwards, Berger said the institution should not be working with a government agency “that is torturing people.”

“For Hopkins’ own health professionals to work with ICE in this regard is a desecration of what our profession should be,” he said. 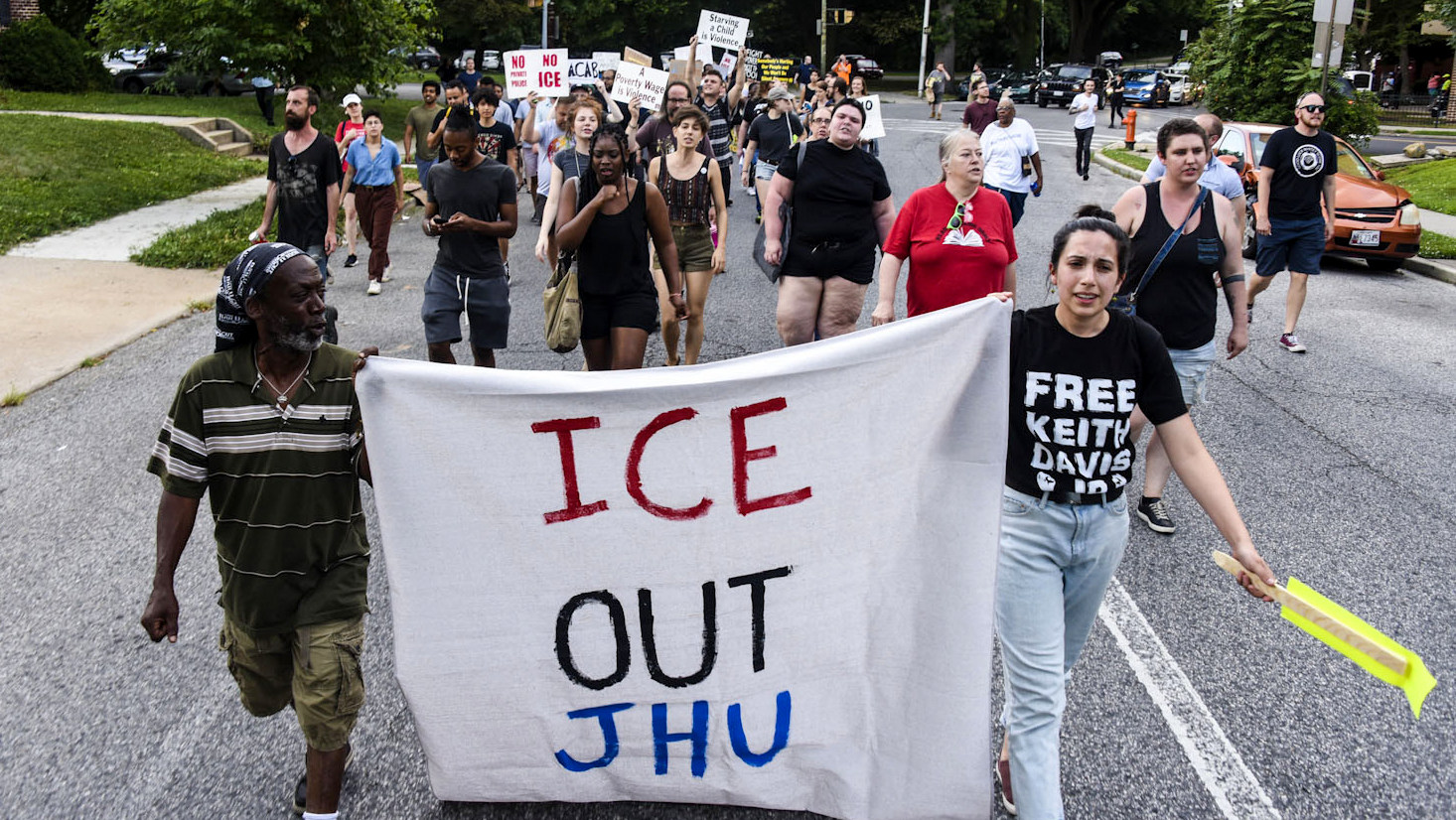 Saying it needs full police powers in response to a crime spike, Hopkins earlier this year steered legislation through the Maryland General Assembly to allow it to form armed patrols in and around its Homewood and Peabody Institute campuses in North Baltimore and the sprawling medical complex in East Baltimore.

But campus and community groups have protested the plan, saying the armed security will be unaccountable and overly militarize and endanger students and others. They have also protested Hopkins contracts that provide medical and leadership training to the federal Immigration and Customs Enforcement agency (ICE).

Calling for both to be canceled, students earlier this year occupied the Garland Hall administration building for a month, an action that resulted in the arrest of seven people.

Yesterday, the chants were the same, as the group marched through the streets of Remington: “No justice, no peace, no private police!”

At one point, a pickup truck tried to push through the protesters, its driver saying he was “just trying to get home.” Police came. No one was hurt. 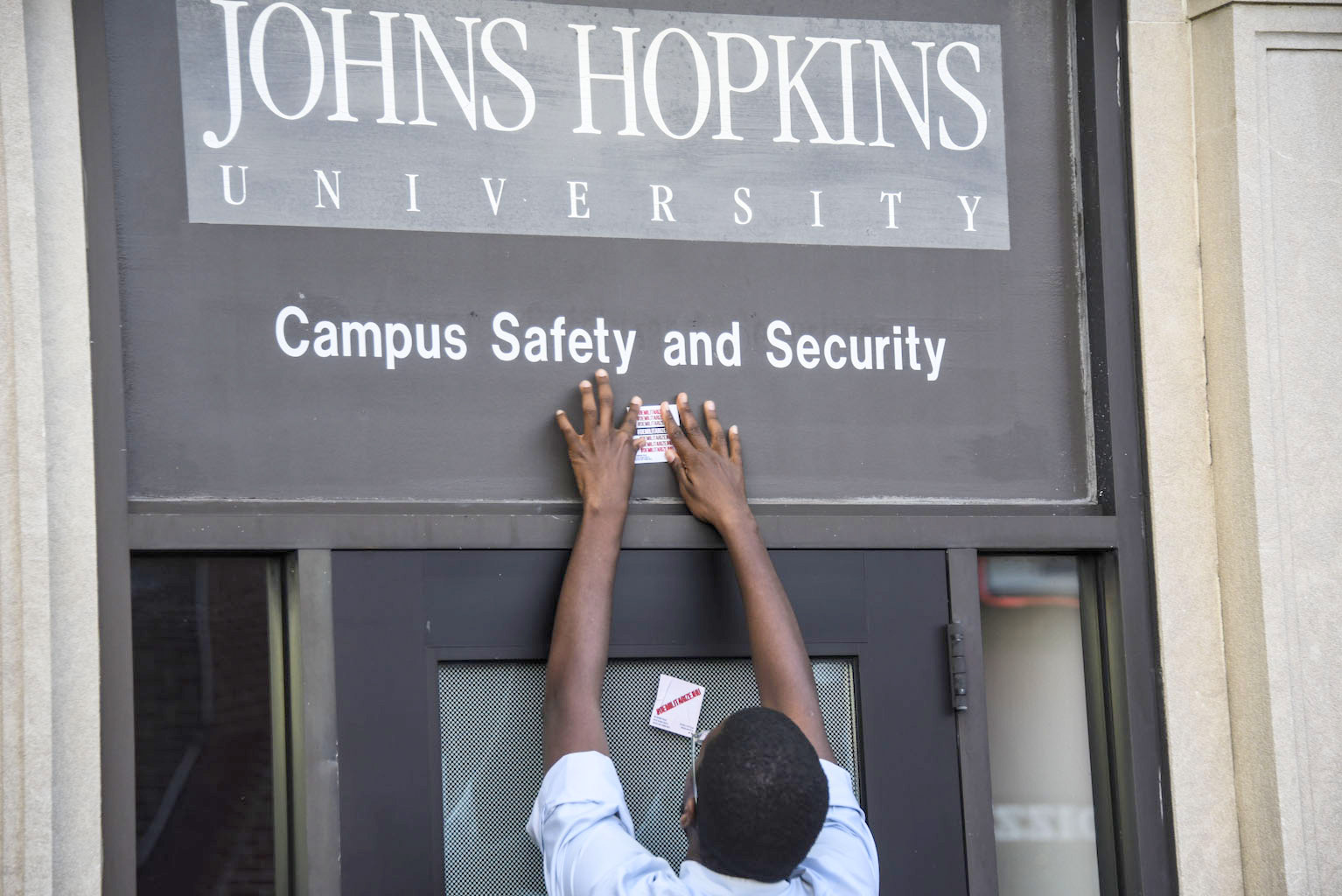 An activist places protest sticker above the door of Hopkins security. (J.M. Giordano)

Not just doctors but nurses were represented at the rally. A statement on behalf of Hopkins nurses organizing their union with National Nurses United said they were “intimidated and surveilled” by Hopkins security along the way.

They recounted an incident last week when they joined with the Coalition for a Humane Hopkins to release a report that said Hopkins filed more than 2,000 lawsuits, often against poor and African American patients, for unpaid medical bills.

“Imagine if those guards had guns.”

“A group of us were surrounded by eight security guards, some of them from the special security unit wearing full tactical gear,” the statement said. “Imagine if those guards had guns. That is a terrifying thought.”

What about patients who are undocumented or have undocumented family members, the nurses’ statement said, or a patient with a warrant out for their arrest “because of a broken brake light?”

“How does that affect our patients or their family members if they are unable to feel welcome at the place and at the time when they are most vulnerable?”