Baltimore’s acting mayor took the unusual step today of publicly clearing himself and other elected officials of interfering in an Eastside housing project involving the politically-wired contractor Kevin Johnson.

“I just want to ask you – was there any influence from any elected leader in who you picked,” Bernard C. “Jack” Young asked the out-of-state developer of a $30 million housing complex in East Baltimore.

The question was posed after City Solicitor Andre Davis identified Johnson as the general contractor for the project.

“No, there was no influence,” replied Sarah Constant, managing director of the Philadelphia-based Mission First Housing Group.

“There was no discussion with any elected official,” she continued. “This was done by our own development team and our architect.”

Two weeks ago, The Brew disclosed that Johnson’s Commercial Construction LLC had renovated – at a steeply discounted price – Mayor Catherine Pugh’s home in Ashburton in 2017.

The Board of Estimates, led by Pugh, later doubled the price of an underground conduit contract co-managed by Commercial from $26 million to $50 million.

At the time, Young was president of the City Council and was among those voting to approve the increase.

Last week, The Brew reported that the same conduit contract had been non-compliant and subject to heavy fines by the city Department of Transportation when Pugh and Young voted for the price bump-up.

Young became acting mayor April 1 when Pugh went on a leave of absence, citing medical reasons, after admitting to accepting $500,000 in undisclosed payments for her “Healthy Holly” children’s books.

At issue today was the board’s approval of a $1.5 million no-interest construction loan to help build apartments on the former site of the Somerset housing project along Central Avenue.

Young lives near the site. Over his 23 years as a councilman and president of the City Council, Young has held strong sway over the area.

A May 2010 city planning document, for example, gave Young a written shout-out for his involvement in Oldtown-Somerset renewal efforts.

Over the same years, Johnson’s Commercial Group has been campaign backers of Young, contributing at least $3,500 between 2013 and 2017.

During the same period, Commercial gave $7,000 to ex-mayor Sheila Dixon, who helped get the Oldtown renewal project going.

Johnson has been the recipient of several controversial awards by the BOE, most notably the much-delayed construction of the Greyhound Bus Station near the Horseshoe Casino.

Sources have told The Brew that the supermarket developer had been pushed to use Commercial by an official in the office of then-mayor Stephanie Rawlings-Blake.

Johnson has not responded to The Brew’s requests for comment.

“Should any improprieties arise”

Today Young turned to the Department of Housing and Community Development (HCD) to explain Commercial’s selection as general contractor for 1234 McElderry, the planned four-story, 104-unit apartment building at the Somerset site.

“As far as the development team and the general contractor are concerned, they were selected by the Housing Authority,” Jim Mayer told Young. “HCD was not involved in any of that process.”

That response led Young to call on Janet Abrahams, executive director of the Housing Authority of Baltimore City.

“I want Ms. Abrahams to tell us about the process,” he said.

“The Housing Authority did their vetting process prior to awarding their contract to this team,” Abrahams said. HABC “retained the right at any time during this process to remove any of the partners or their affiliates should any improprieties arise during this project.”

The show of self-vetting process continued with City Solicitor Davis asking Abrahams, “To what extent was the Housing Authority or any other city official involved in selecting the prime contractor for the project?”

“The developer is responsible for naming their contractor – we did not take part in that process,” she said. “What we did, once they submitted their package, we did the vetting process looking at our debarment list and other lists we have available to us.”

“And you found nothing – no red flags?” Davis asked.

Sarah Constant of Mission First then told the board that her group pre-screened three contractors.

“Can you name them?” asked Davis.

“Who is the president of the company?” asked Davis.

At this point, Young jumped into the conversation to elicit from Constant that no elected official had played a role in the selection of Commercial.

After that information, the spending board unanimously approved a $1.5 million HOME loan for the project and adjourned.

After the meeting, Young was asked about the decision to call on a private developer to deny influence peddling by an elected leader.

He said, “We can’t tell the winner of the bid what team they need to pick. All we do is make sure that we hold them accountable for the money that’s being spent, that the project comes in on time and under the budget.”

He indicated that any questions of impropriety had been answered.

“The Somerset-Oldtown project needs to move so we can meet the deadline that we need to meet in order for the funding to be provided.” 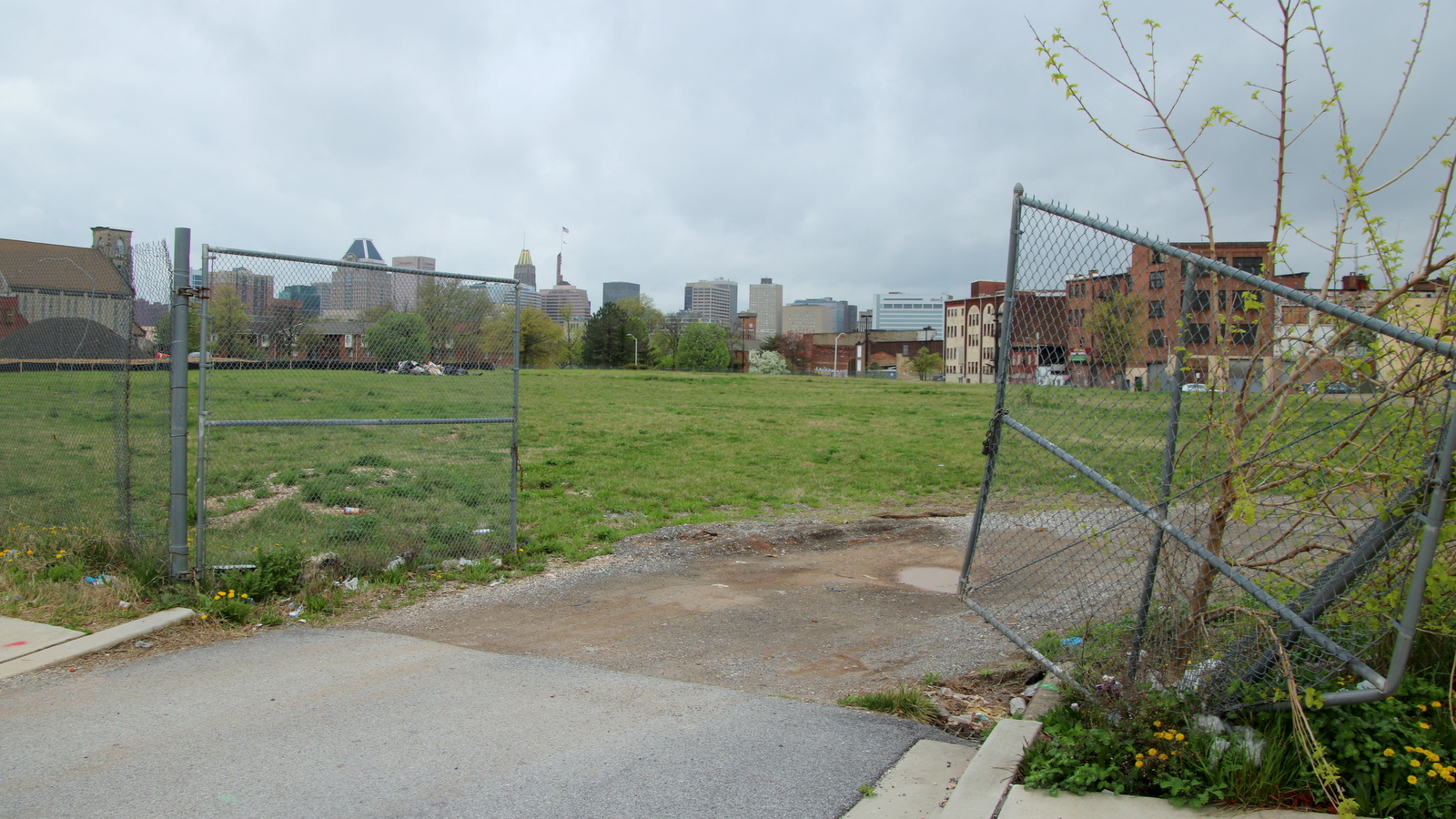 Project at the intersection of Monument Street and Central Avenue at the site of the former Somerset Homes. (Fern Shen)