Architect Gordon Godat had an idea for adding a touch of history to the 52-unit apartment building his client wants to build on property in Woodberry where two historic stone millworkers’ houses were leveled in May.

It didn’t go over well with the community.

Godat proposed salvaging stones from the remains of the 1840s houses and incorporating them into a long, narrow “green space” on the side of the building, where residents could gather when they wanted to step outside their apartments.

And if there are enough stones left over, he said, they might be used on the front facade, to mark the building’s water table. It would be “where people could see them, touch them, feel them,” he offered.

Woodberry residents who came to the community meeting last night were not impressed.

They said he had it backwards. They said they wanted all of the salvaged stones to be used on the outside of the building where the whole community can see them, not in private spaces visible only to residents of the building. 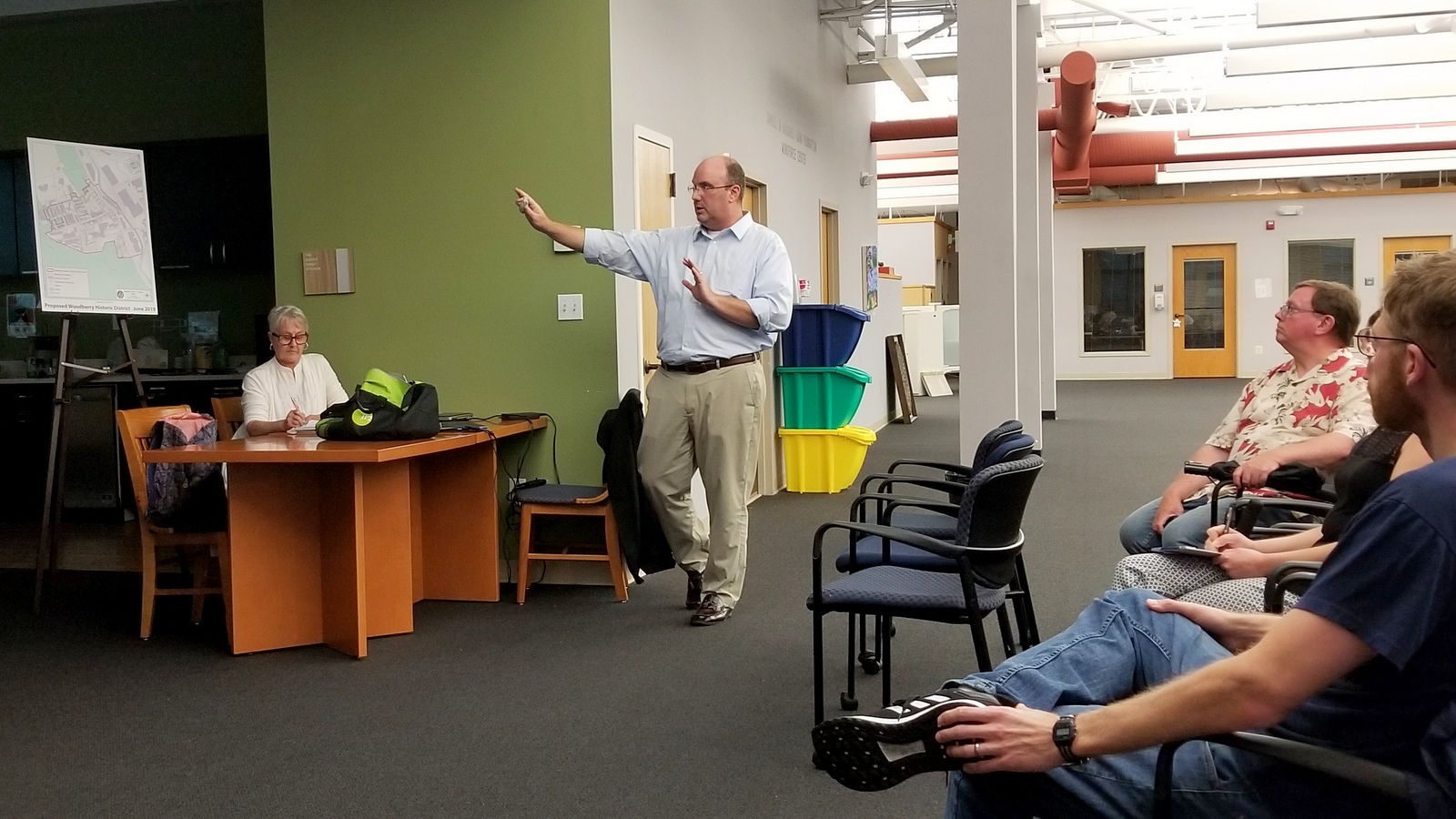 “I personally would rather see our stones on the front of the building,” said Sheri Higgins, president of the Woodberry Community Association, which held the meeting.

“Those stones are. . . the fabric of this neighborhood,” agreed Brick Hill resident Marian April Glebes. “We don’t want the stones buried.”

“You’re an architect,” added Clipper Road resident Jill Orlov. “You went to school for this. Do you think this is appropriate use of the space?”

During an hour-long session, residents had literally nothing positive to say about the design.

They found fault with the proposed building’s height, the number of units, the boxlike exterior, the lack of parking, the lack of eco-friendly features and the lack of provisions for delivery trucks and other service vehicles. 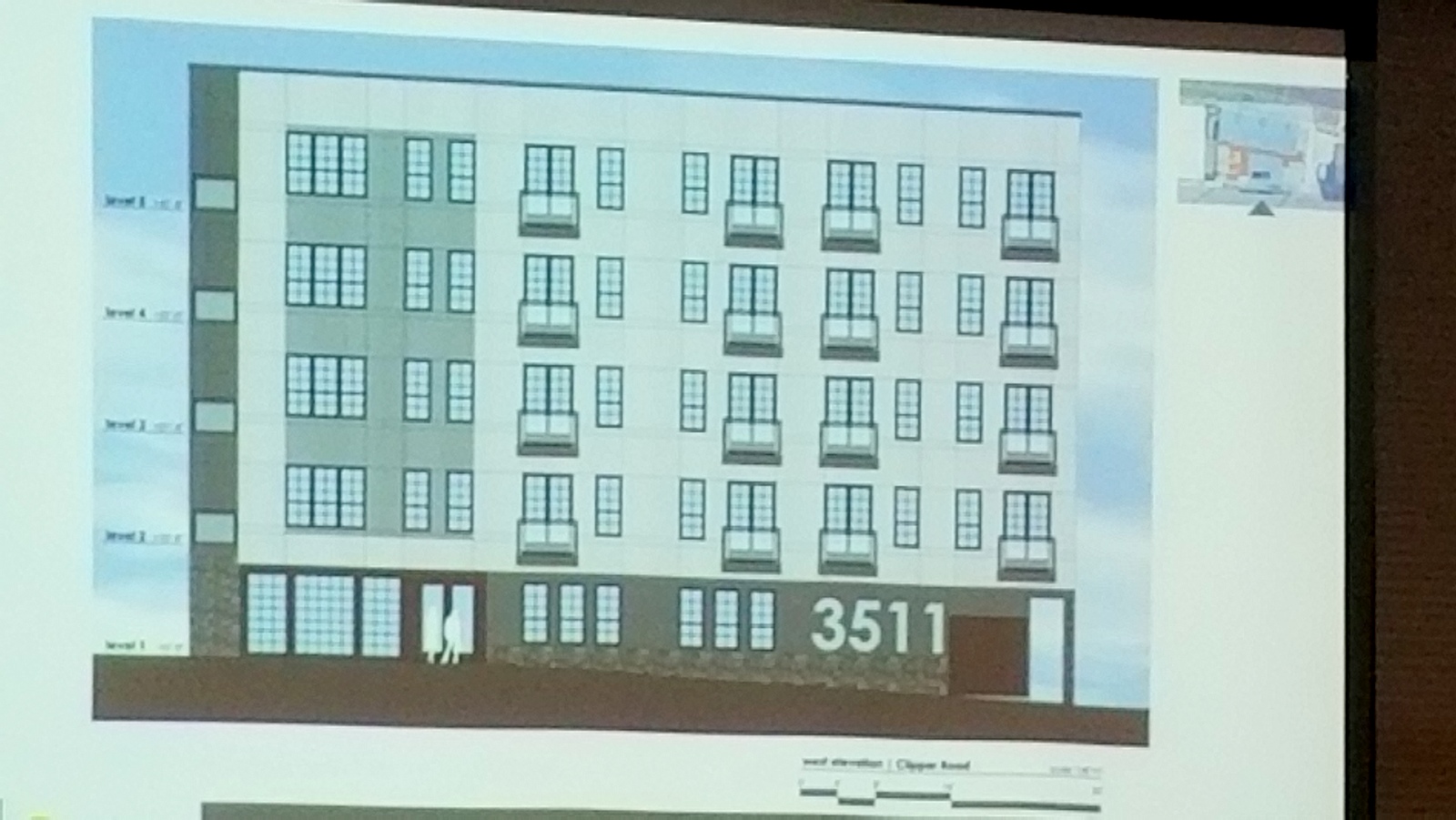 The front facade of proposed five-story apartment building would be across the street from the historic houses (below) on Clipper Road. (Both: Ed Gunts)

The only thing they complimented was the architect’s bravery for coming to the meeting after his client broke the community’s trust and tore down the houses at 3511 and 3523 Clipper Road.

The houses were demolished on May 21 after the community had been promised that they would be saved as part of a new development called Woodberry Station.

They were built 170 years ago to provide housing for employees of nearby Clipper Mill, but they weren’t protected by local landmark designation.

Preservationists said it was a great loss for the community and the city because Woodberry until then had been one of the few relatively intact mill villages in the country.

“They were part of a group of pre-Civil War stone houses that are at the core of the significance of the Jones Falls Valley and its history,” said Johns Hopkins, executive director of Baltimore Heritage, a preservation advocacy group.

The site is owned by a Woodberry Station LLC, a group whose resident agent is Katherine Jennings.

Before the demolition, developer Chris Mfume, a son of former U. S. Rep. Kweisi Mfume, was the face of the development team, and Jennings stayed in the background.

After the demolition, Mfume announced that he had quit the team and had nothing to do with the houses coming down.

So did the architects, Pavlina Ilieva and Kuo Pau Lian of PI.KL Studio, and planning consultant Al Barry. Their departures forced the property owners to start over.

Jennings didn’t come to last night’s meeting. Godat is a principal of JP2 Architects, the firm hired to come up with a new design.

“It’s unfortunate what happened,” Godot told the Woodberry residents. “I understand your concerns. We’ve been on the project for three weeks now. We wanted to show it to you before we show it to the city.”

Godat said Jennings is still a member of the land ownership group. He declined to say who else is part of Woodberry Station. 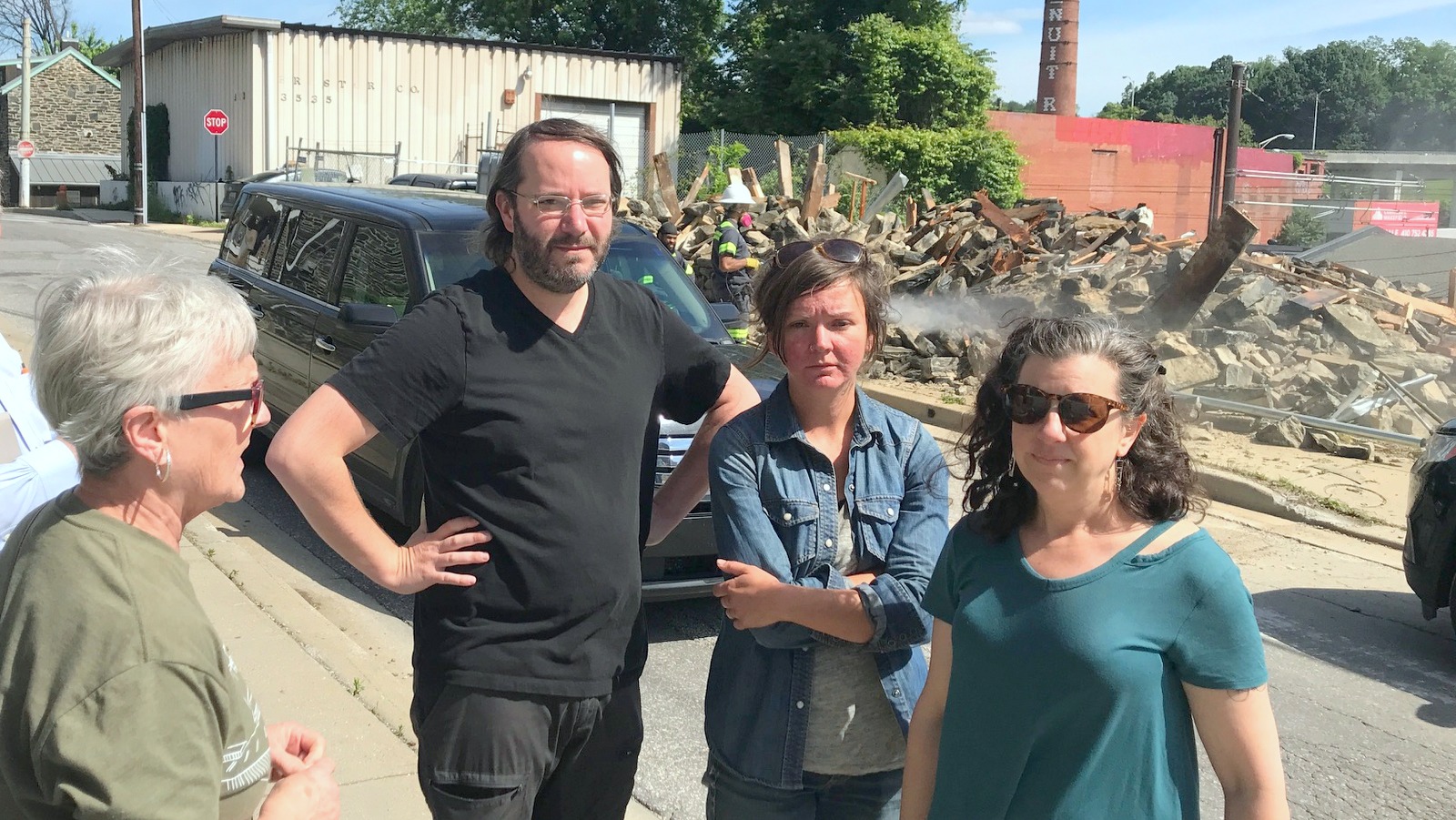 Woodberry residents stand before remains of the stone houses they thought developers Katherine Jennings and Chris Mfume had agreed to save. (Mark Reutter)

Godat said one key design change is that the property owners now want to move ahead with a building that occupies only about half the site, and he was asked to develop a design for the land where the house at 3511 Clipper Road once was.

He said the land to the north may be developed in the future, but “it’s not slated for anything at this time. The development is only on the southern half, 3511.”

At 300 to 400 square feet, apartments are considered “micro” residences and would be some of the first built in Baltimore.

Godat said the zoning code allows a building to rise up to 60 feet on the site and that his design calls for a building that is 56 feet tall, the same height as the one designed by the previous architects.

He said his preliminary design calls for a building that has five stories and 52 apartments in all – 48 studios about 300 to 400 square feet in size and four one-bedroom units each with about 490 square feet.

At 300 to 400 square feet, apartments are considered “micro” residences, and these would be some of the first built in Baltimore.