Widely criticized for Baltimore’s use of non-disparagement agreements to settle police misconduct claims, City Solicitor Andre M. Davis delivered a heated self-defense today, slamming the ACLU of Maryland and others, accusing them of disparaging him.

“There are certain people out there who think that the way you get what you want is to beat up on somebody, to disparage the city, to bring people down,” Davis said, when the issue flared at today’s Board of Estimates meeting.

“People don’t want to come and talk sensibly to people to resolve matters,” he complained, observing that if the ACLU had waited until he had started his job as city solicitor in September 2017 before filing a federal lawsuit against the practice, the case “could have been resolved very easily and, frankly, nobody would have ever found out about it.”

Coming two days after a City Council hearing on a bill to end the gag orders – a hearing in which impassioned speakers called Davis’ efforts to justify the non-disparagement agreements (NDAs) deceptive and “antithetical to transparency” – Davis’ remarks were by turns defensive and combative.

For Davis, that has meant fighting the ACLU’s lawsuit, filed in June 2017 on behalf of police misconduct claimant Ashley Overbey Underwood and this website, Baltimore Brew.

Two months ago, the U.S. Fourth Circuit Court of Appeals struck down the city’s use of NDAs as unconstitutional, calling the practice “hush money” that limits the First Amendment rights of claimants and the press.

At certain points today, Davis appeared to be re-litigating the lawsuit, arguing as he has in multiple courtroom appearances and filings that Overbey had a lawyer in 2015 when she signed an NDA with the city.

• The price of Baltimore police misconduct – $24.5 million and rising

He went on to criticize Overbey for not filing the ACLU lawsuit in a timely fashion. “She waited three years to bring a lawsuit. The law in Maryland is, if you sue the city, you’ve got to do it in a year.”

“Anybody can lie anytime they want. And people can be called a liar, as I have been called a liar by the ACLU.”  – Andre Davis.

He vigorously defended the continued use of NDAs in police settlements, calling them “the way lawsuits have been settled for hundreds of years.” He said he had modified the city’s language shortly after he became solicitor to make it more transparent and fair to claimants.

At the same time, he expressed frustration about non-lawyers who were criticizing the contents of the legal agreements he fashions.

“A lay person, however brilliant he or she is, can’t pick up this document and be able to explain it the way a lawyer does,” he said.

Asked to explain in layman’s terms what a claimant who signs a misconduct settlement can or can’t say, Davis said, “They can’t lie about the city.”

“Now I say that,” he went on, “but, of course, they can lie. Anybody can lie anytime they want. And people can be called a liar, as I have been called a liar by the ACLU.”

The ACLU today responded by saying, “The mayor and city solicitor should stop defending their unconstitutional practice and stop seeking to perpetuate it.”

Many of Davis’ remarks were made during a tense back-and-forth between him and City Council President Brandon M. Scott.

Unlike Mayor Bernard C. “Jack” Young, who has steadfastly backed Davis and NDAs, Scott has supported the bill to end the practice. He praised the public safety committee for unanimously approving the bill on Monday. It is set to go to the full Council for a vote next week.

“Mr. Solicitor, before you go any further,” Scott said, breaking into one of Davis’ monologues. “I don’t mean to interrupt you, but we are going to be here for a long time. And I got some questions.”

Brushing aside the remark, Davis described a policy, instituted by the mayor yesterday, to allow victims of police misconduct to speak to the Board of Estimates when the settlement of their cases comes up for board approval. 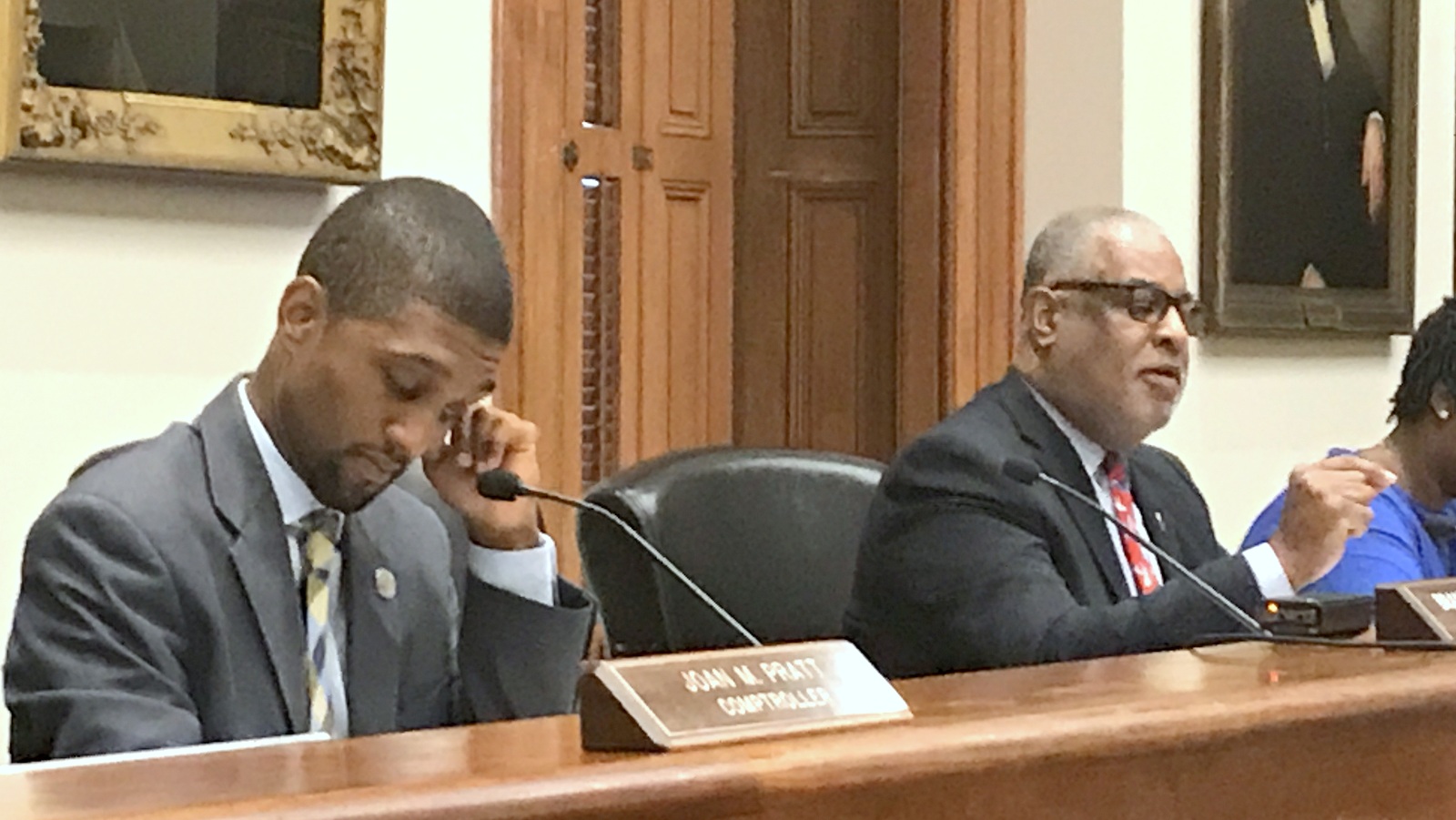 City Solicitor Davis praises a policy, instituted yesterday, in which victims of police mistreatment can testify when their lawsuits come up for BOE approval. (Mark Reutter)

But what was billed as the first example of the new policy – involving a woman paid $75,000 after she suffered an alleged police beating – was stymied when the woman refused Davis’ offer to come before the board.

“She has elected not to provide her phone number,” Davis continued before reiterating that “I think this will enhance transparency in Baltimore City.”

To which Scott said that he – not Davis or the mayor – had first placed the woman’s case on the board’s “non-routine” agenda so that he could ask her questions about her encounter with Officer Charles E. Grimes in August 2014.

Both Scott and Davis brought up speakers who testified to their experience with police misconduct.

Scott introduced a student, Justin Johnson, who said he had friends silenced as a result of signing a gag order and called for the city to stop using them.

“As a black person living in Baltimore City, I’ve seen, for far too long, Baltimore City’s leadership – from elected officials to police officers – get away with harming and bringing intense violence to the people of Baltimore.”

In response, Mayor Young said that when he was City Council president, he voted “no” on police settlements. “I wanted to hear what happened. So I got criticized, and I voted no because I believed that they [claimants] should [be able to] talk about anything that happened to them.”

Echoing what he has said before, Young insisted that the present-day language of the NRAs, as crafted by the city solicitor, do not amount to gag orders.

“No one should be gagged. That’s why I told the city solicitor we have to make sure there are no more gag orders,” he said.

(Countering Young’s comments, the ACLU today said, “Whether you call them ‘non-disparagement’ clauses or ‘non-disclosure’ agreements, they still limit what survivors can say. They’re still gag orders, and the city must not be allowed to use them.”) 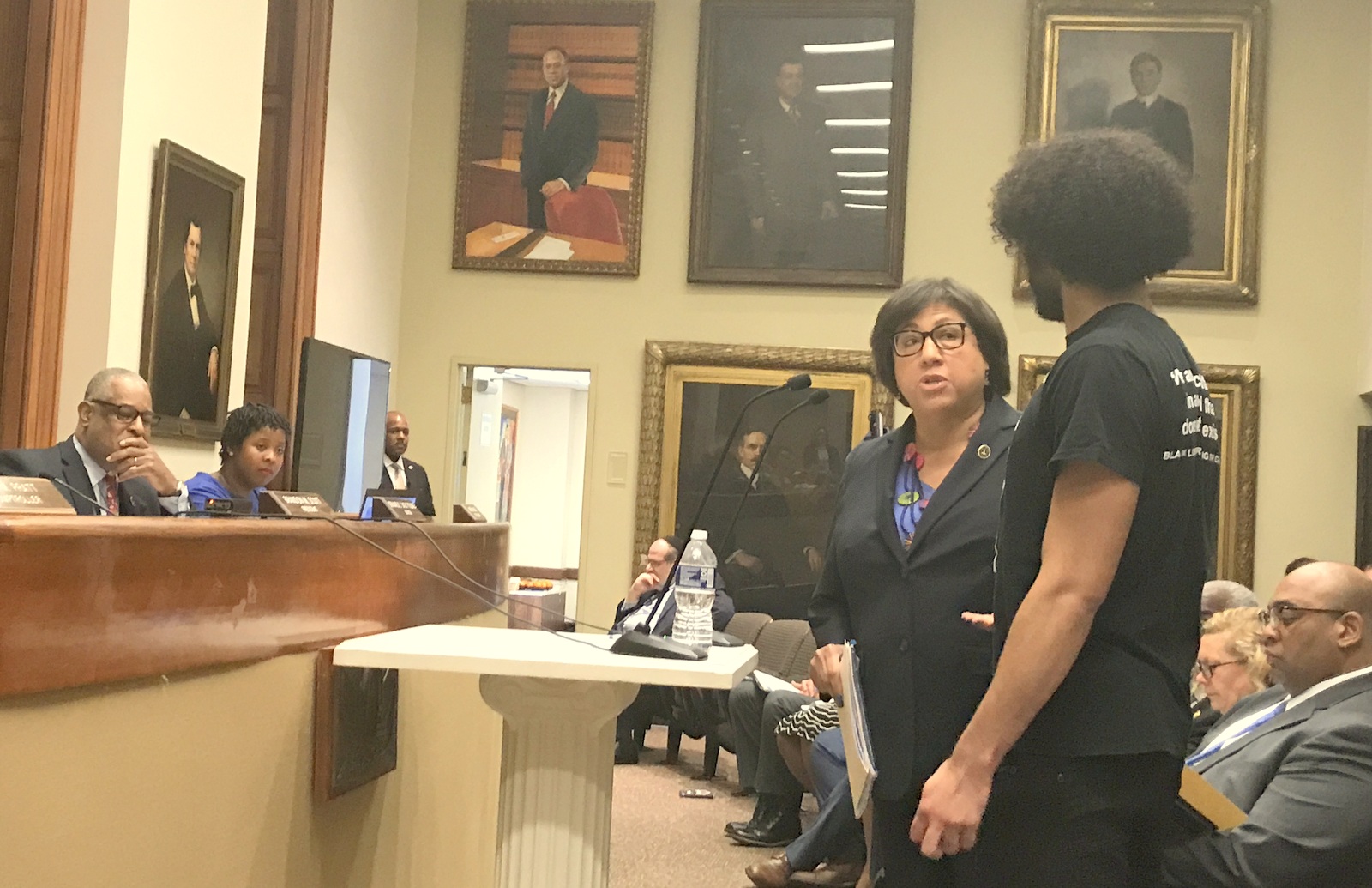 She recounted a “terrifying” incident in the spring of 2000 after she had passed a police officer’s car on the left-hand side of the road and he had pulled her over.

“I was treated very poorly. I was cursed at. Called names. Told that if I didn’t give my driver’s license to the officer immediately, I would be pulled through my window and beaten and arrested,” she said.

The upshot of her anecdote seemed to be to establish her bond with other police victims as she praised Davis’ recommendation that the board invite claimants to the weekly meetings.

“They are me, and I am them. I’ve been there,” she said, turning to Johnson.

She said those who spoke at Monday’s City Council hearing should recognize that the solicitor’s office is on the side of citizens and transparency.

“Monday night was fascinating. There were a lot of truths told, and there was some disparagement,” Moore told the board.