For the past 24 years, only one councilman – the low-key and laconic Edward Reisinger – has represented Baltimore’s southernmost 10th District, a once-thriving blue-collar part of the city hemmed in by Interstate 95 and the Patapsco River.

But with Reisinger planning to retire when his term ends next fall, sevencandidates – more, so far, than in any other district – are running to replace him.

Although eight months away from the April 28 Democratic primary, the race is already heating up, with some hard-charging, would-be successors vying for the seat.

Phylicia Porter, a 31-year-old healthcare consultant, held an event at Baltimore Soundstage, a downtown concert venue to announce that she had won the incumbent’s endorsement.

“I’m a Porter supporter,” Reisinger told the crowd at the event. “She not only cares, but she’s got that fire in the belly.”

Reisinger said Porter was persistent and proactive in her outreach to him and to the district’s business owners. In an interview, he said business owners have asked him, “Who’s this Phylicia Porter? She keeps calling.”

Candidate Keisha Allen, meanwhile, describes herself as a community activist already well-known to residents of the district.

President of the Westport Neighborhood Association for the last eight years, Allen styled her first event in the form of an ice cream social held at Florence Cummings Park near Mount Winans.

“I’m experienced in being accountable to people who can remove you,” Allen, a 44-year-old medical systems and billing trainer for a hospital system, told The Brew.

After the Factories Left

Residents of the sprawling 10th – which includes Pigtown, Morrell Park, Violetville, Lakeland, Cherry Hill, Brooklyn, Curtis Bay, Hawkins Point as well as Westport and Mount Winans – frequently complain that their part of Baltimore is all too often forgotten or “dumped on” with undesirable businesses or facilities.

Crisscrossed by highways and railroad tracks, the communities here have a long history in shipping, boat building, heavy industry and manufacturing.

That past is gone, replaced by a present plagued by joblessness, boarded-up houses and crime as employers moved away, but also by pockets of activism and self-renewal as residents successfully fought against polluting industries. 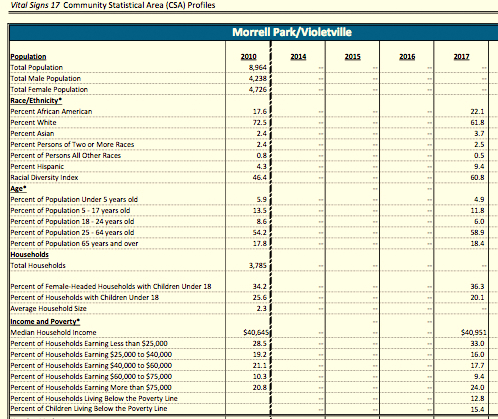 Demographic information for some of the neighborhoods comprising the 10th District. Note both the number of children living below the poverty line and the increase in median household income in Brooklyn/Curtis Bay/Hawkins Point. (bniajfi.org) 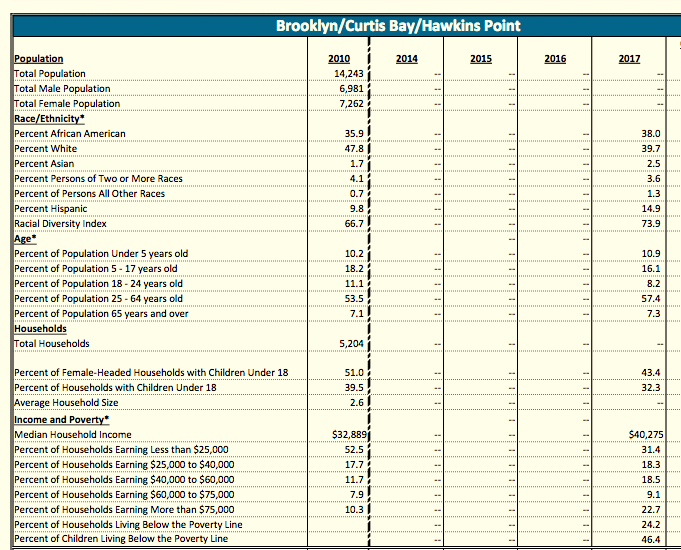 Located across the Hanover Street Bridge from the rapidly gentrfying South Baltimore peninsula, the 10th has been home to a pair of polluting trash incinerators.

Public opinion on these facilities has shifted over the course of Reisinger’s time in office. And so has the councilman, at times reluctantly.

He had supported Energy Answers’ trash-burning incinerator proposed a decade ago that was finally dropped amid community opposition.

By the time momentum built for a Council bill to limit emissions from the city’s BRESCO trash incinerator earlier this year, Reisinger was on board and quarterbacked the legislation to the mayor’s desk where it was signed into law.

Asked about it at the Soundstage event, he said “the most important issue in my district is crime and grime.” He said illegal dumping, carjackings, drug use and shootings are all too common.

But amid the environmental activism that has flourished here with the incinerator battles, creation of a community land trust and the celebrated Filbert Street Garden, local leaders tend to frame the problems and solutions differently.

Many see the district’s economic and social issues through a public health lens and are looking for ways to promote sustainable development. 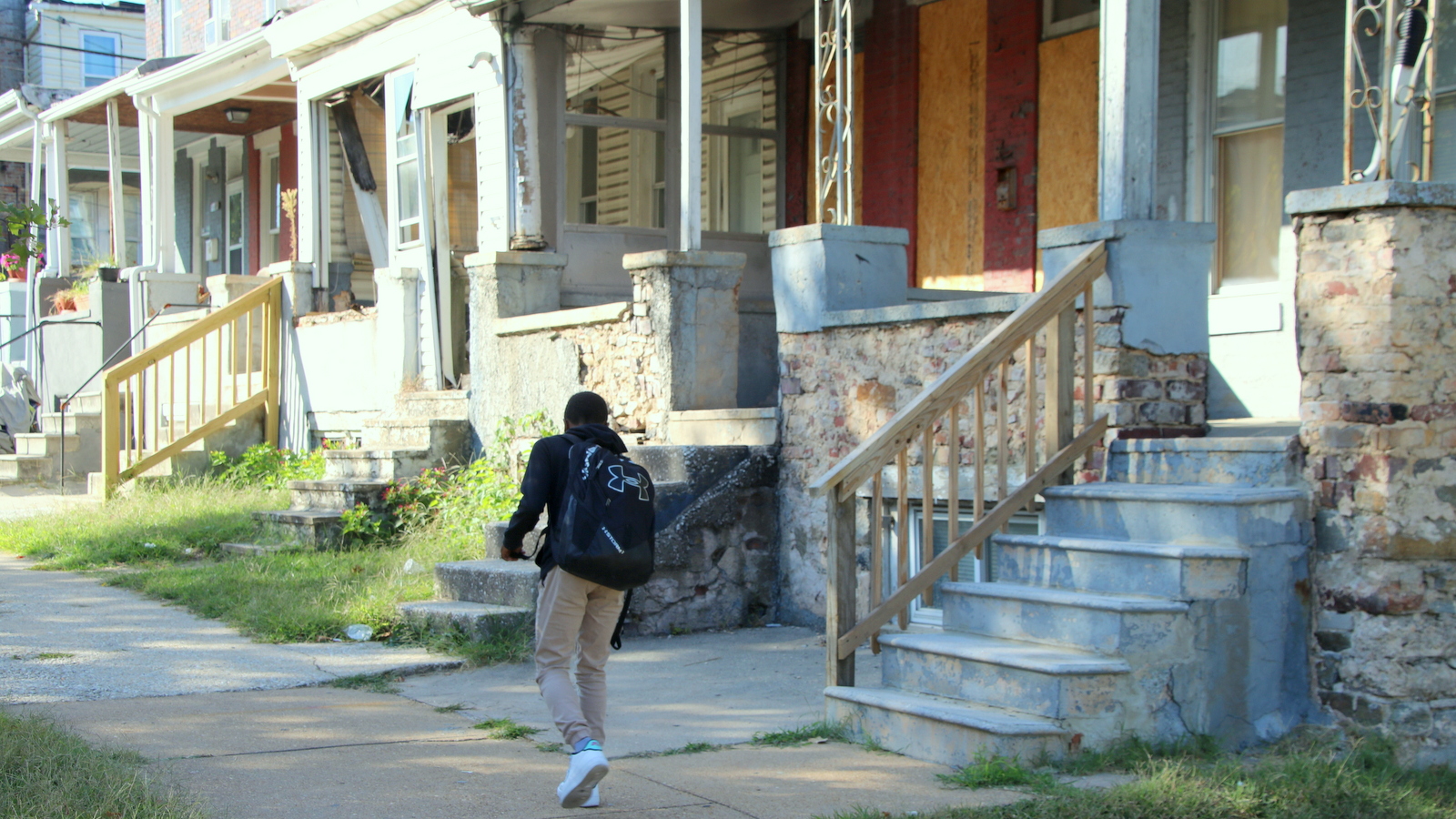 That’s true of political candidates like Porter, who has worked most recently for the Sickle Cell Disease Association of America and vows to bring a public health perspective to City Hall.

“We support our own! From artists to urban farmers, and everyone in between. This is what community power looks like,” her campaign tweeted in July, along with photos of Porter with a resident in his gardening overalls and another beside her abstract artwork.

A board member of the South Baltimore Gateway Partnership, Porter says she got her start nearly a decade ago working to register and turn out voters in Baltimore City elections.

Porter said she has also worked with her community association Citizens of Pigtown, the Baltimore branch of the NAACP and Pigtown Mainstreet and collaborated with Out for Justice on their Re-Entry Health Needs Assessment. 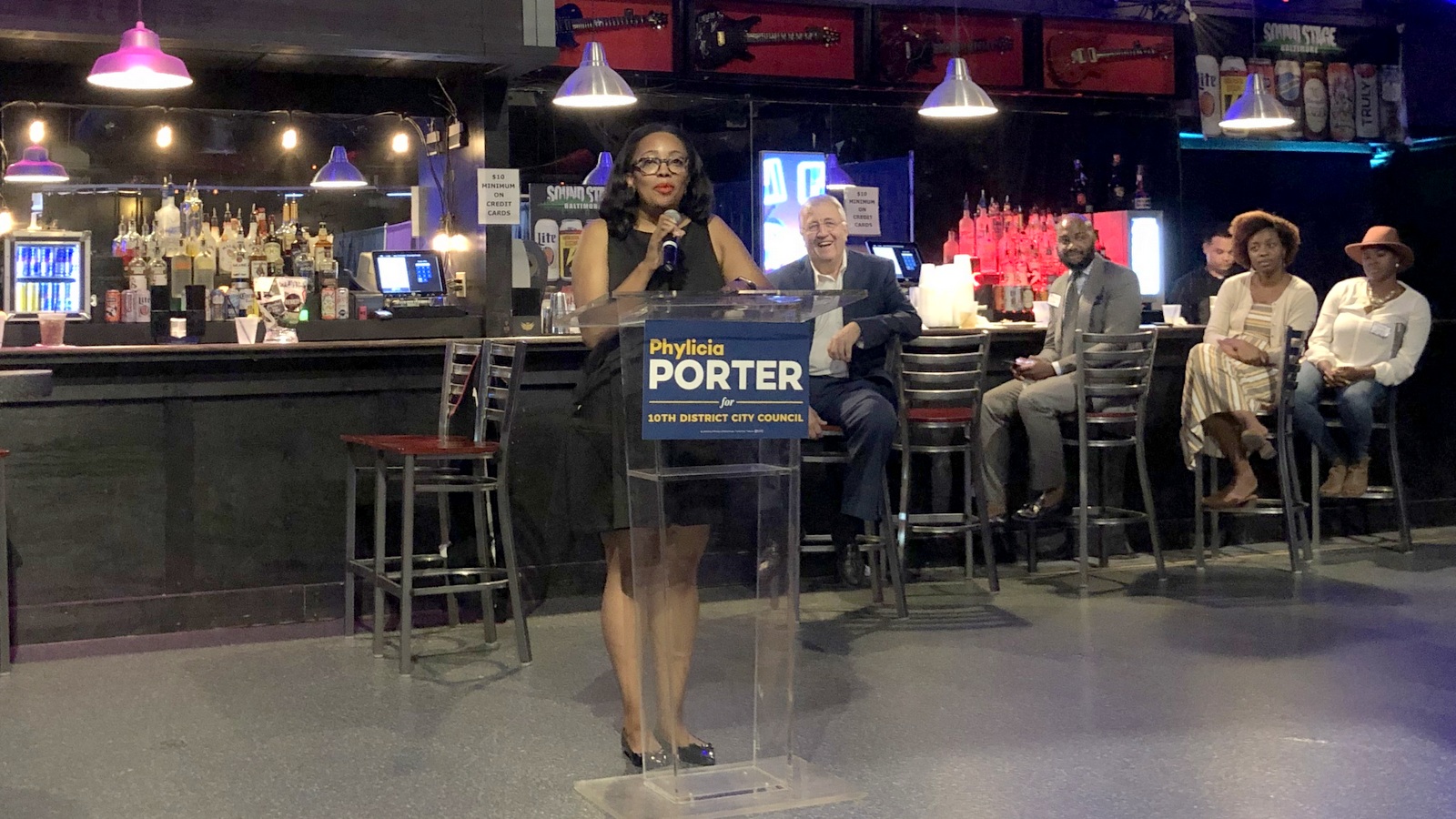 Porter is the only candidate who has raised a significant amount of money to date, according to the Maryland Board of Elections.

She reported a cash balance of $10,054 as of last January. Almost all of the cash came from four donations of $2,500 each from Houston hairstylist Reva Anderson and from Alexus Better, Amber N. Douglas and Kierra A. Lloyd of Baltimore.

The only other candidate to report donations is Ray Conaway, who has raised around $550.

Porter’s networking began two years ago when she allied with other young political hopefuls, volunteered on Antonio Hayes’ successful bid to win a 40th District state senate seat and mounted her own successful campaign for Democratic Central Committee.

Porter has lived in the district for seven years.

Allen, who is fundraising now, may not have a campaign war chest yet on record, but she is a front-runner when it comes to visibility as one of South Baltimore’s leading activists over the past decade.

A co-founder of the South Baltimore Seven neighborhood coalition, she and her colleagues secured a commitment of $39 million in community benefits from Under Armour’s Kevin Plank and other developers of Port Covington. 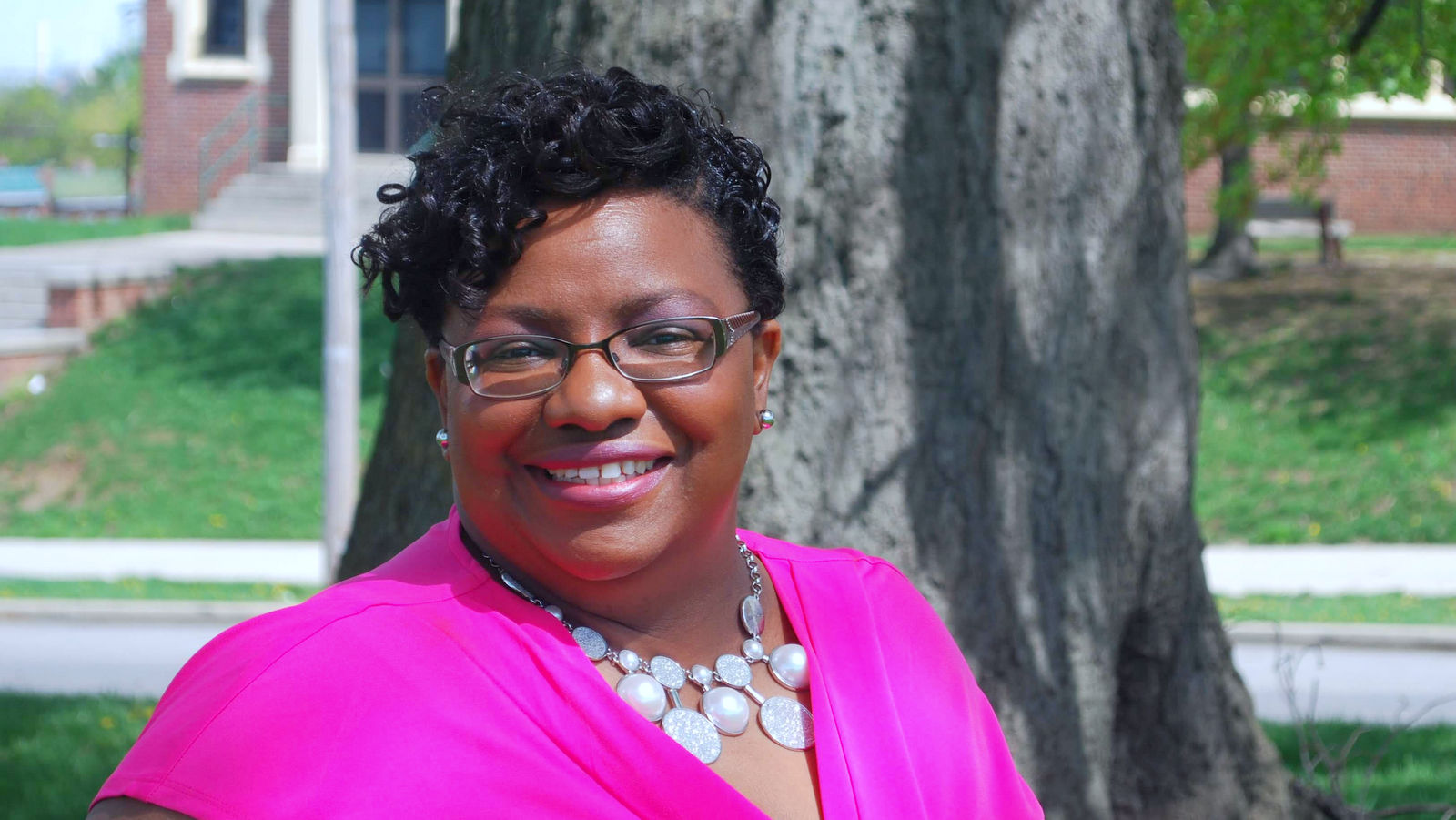 Westport Neighborhood Association president Keisha Allen is hoping to win the Council seat on the strength of her community involvement. (Handout photo)

Among her leadership positions is a three-year stint on the Civilian Review Board, which investigates complaints about city police, that included serving as chair of the board.

“We have a lot of residents who were pushed out that want to return. This population loss doesn’t have to be.” – Keisha Allen.

She also served for six years on the Baltimore Casino Local Development Council, which consults with the city on how to spend local impact funds from Horseshoe Casino, including three years as the vice chair.

Allen wants to address affordable housing, bring people back into the city from the counties and revitalize the district’s commercial corridors. She said public safety plays a big role in that, and that she intends to spend some of the pledged Port Covington money on cameras and lighting.

“We have space for new housing,” Allen said. “We have a lot of residents who were pushed out that want to return. This population loss doesn’t have to be.”

Allen says she has lived in the district for more than a decade.

Several others have also set their sights on the 10th District seat.

Cynthia Hendricks Jones, a member of the 46th District Democratic State Central Committee, says she wants to rehabilitate vacant houses and penalize owners for neglecting them.

“They’re buying up property, then they’re going back where they came from,” she said. She said she would also promote rent control and the use of auxiliary police.

A top vote-getter in the 2018 primary election for the Central Committee seat, she said she is not impressed with Porter’s fundraising or her track record of community engagement. 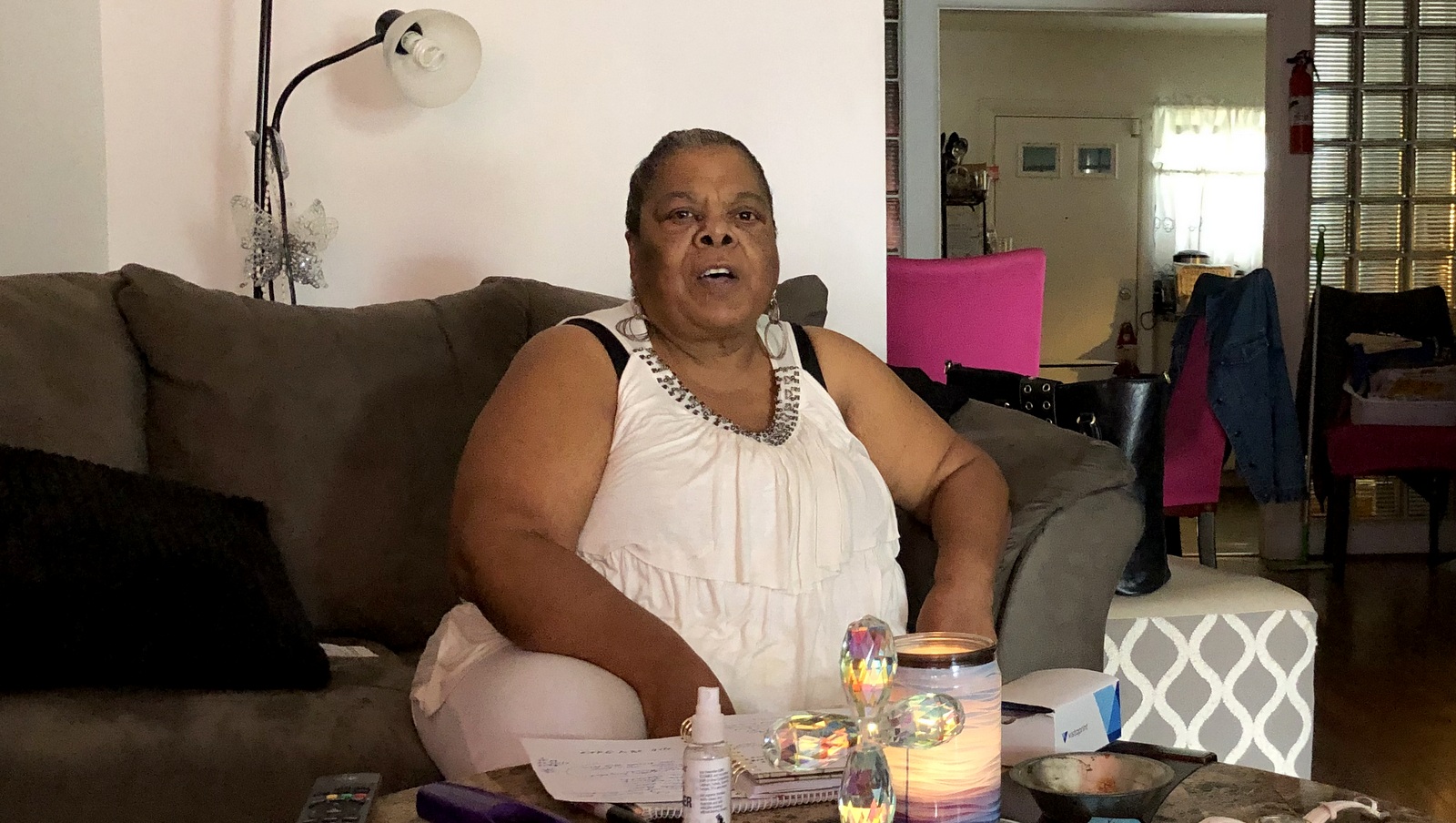 Democratic Central Committee member Cynthia Hendricks Jones says she has the experience to battle blight and crime. (Ian Round)

Kerry Eugene Hamilton, a former basketball coach and founder of the Kerry Kares Foundation, says he wants the city to expand rec center hours and offer more “leisure activities” to seniors and youth.

His foundation connects job seekers, many of them with criminal histories, with jobs and job-training opportunities.

“If you want people to stop shooting and stop doing criminal activity, you have to fill that void with some type of positive activity,” he said.

Hamilton ran in the 2016 primary for Reisinger’s seat, but dropped out early after two strokes and two back surgeries.

“My strokes affected my mobility and my speech, but it didn’t affect my thinking, and I thank God for that,” he said.

“A lot of things that could have happened didn’t materialize.”  – Kerry Hamilton.

Hamilton, 62, graduated from Morgan State in 2015 with a degree in philosophy and religious studies.

He faulted Reisinger for not tackling the district’s problems with more energy. “A lot of things that could have happened didn’t materialize,” he said. 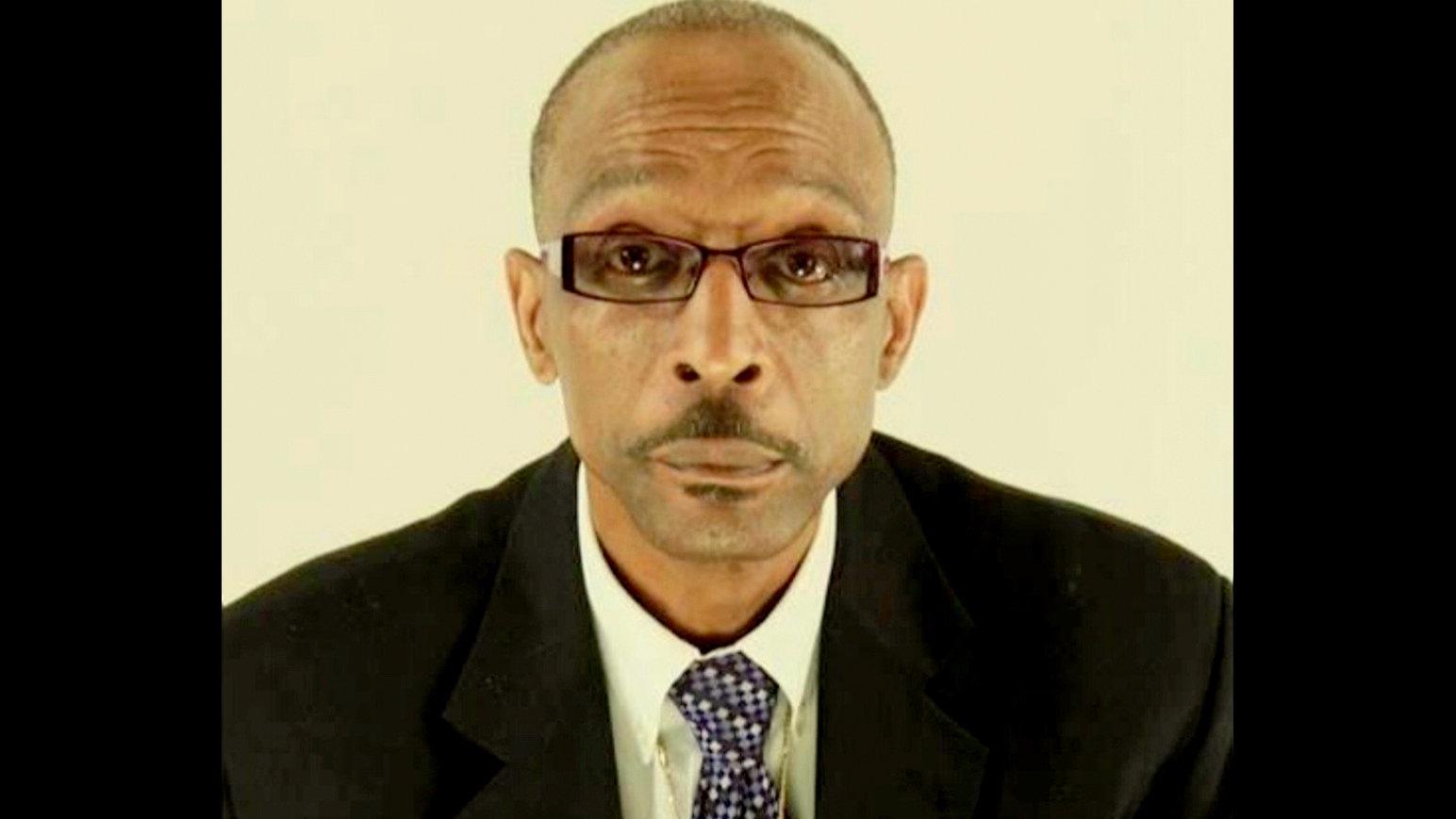 Natasha Guynes is campaigning on her work in Washington, her activity in the community and her personal story.

In 2015, Guynes founded HER Resiliency Center, a D.C. social service organization that supports women struggling with homelessness, substance abuse and mental illness. She is a newcomer to Baltimore, having moved here to expand the center after receiving  grant from the mayor’s office.

Guynes has struggled with depression, addiction and homelessness herself, and this experience – more than policy – is central to her campaign.

She moved to D.C. as a teenager, a “leap of faith” to escape a childhood in which she was exposed to drugs, according to her website.

She said she engaged in sex work to make ends meet in her early 20s. After going through recovery, she worked for U.S. Senators Harry Reid (D., Nevada) and Brian Schatz (D., Hawaii) and as well as for Media Matters for America.

“We need a more holistic approach to helping vulnerable communities in our city,” she told The Brew. “When we start arresting women or drug addicts without addressing the underlying factors, we’re not going to make any changes.”

An active member of the Pigtown Association, Guynes notes she is also part of the Baltimore Human Trafficking Collaborative, the South Baltimore Workforce Collaborative and the Highlandtown Taskforce “which is working to create holistic neighborhoods in Districts 1 and 10.”

As a volunteer every Tuesday at Wayman AME church in Pigtown, she said, she was recently able to help a young woman get into rehab with transitional housing for 18 months.

She said she has not yet recruited volunteers or knocked on doors, but those efforts will begin in November. Her campaign chair is Charlie Metz, who challenged Reisinger in the 2016 Democratic primary – and lost by just 130 votes. 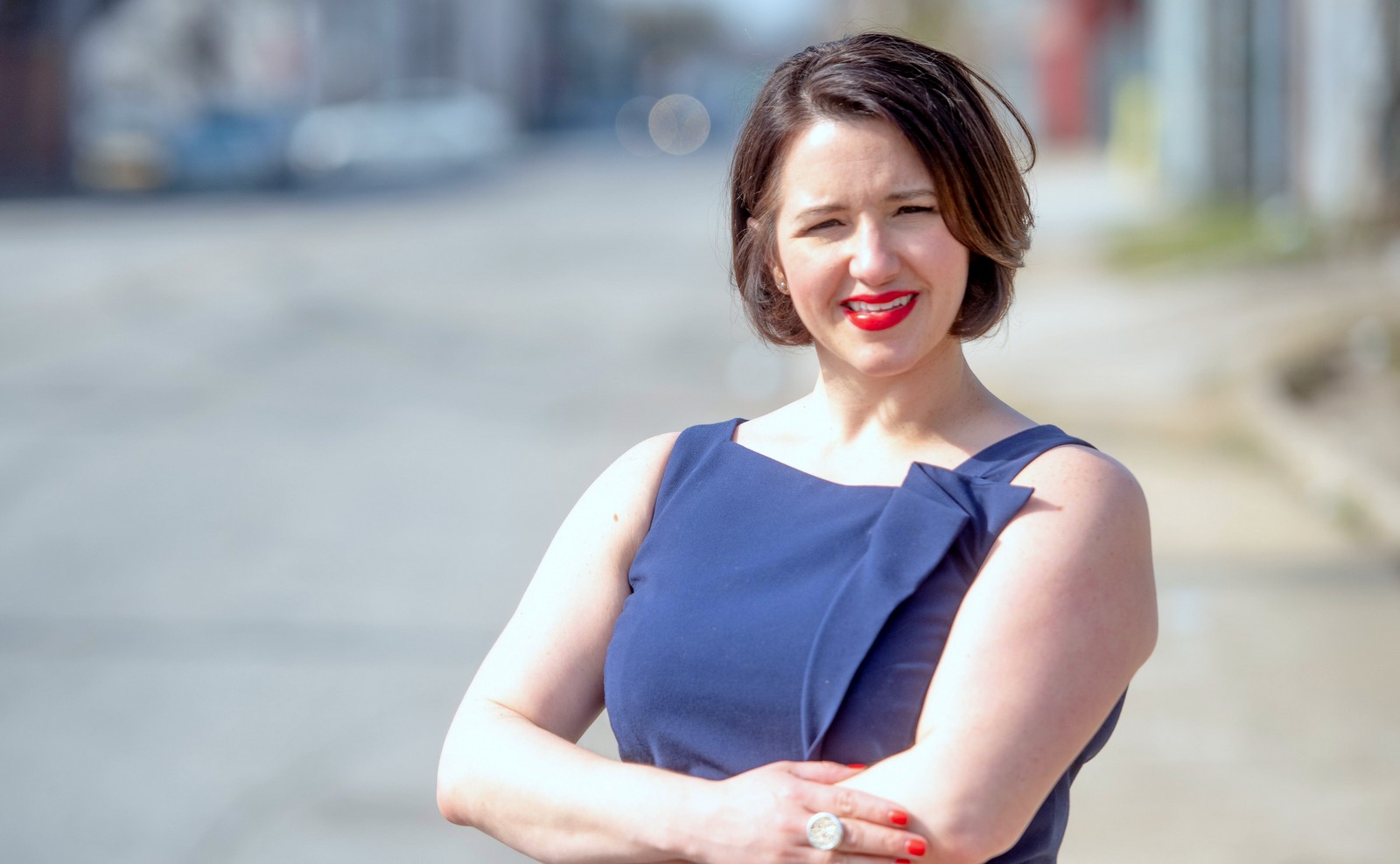 Ray Conaway, 24, who graduated this spring from Bowie State University with a degree in political science, says he wants to seek community-based, public health solutions to crime and public safety.

Conaway is a program manager for Community Law in Action and worked part-time in youth development at the Patapsco Recreation Center in Cherry Hill before it closed in 2016 (it reopened earlier this year).

“That was really my intro to organizing and community,” he said. 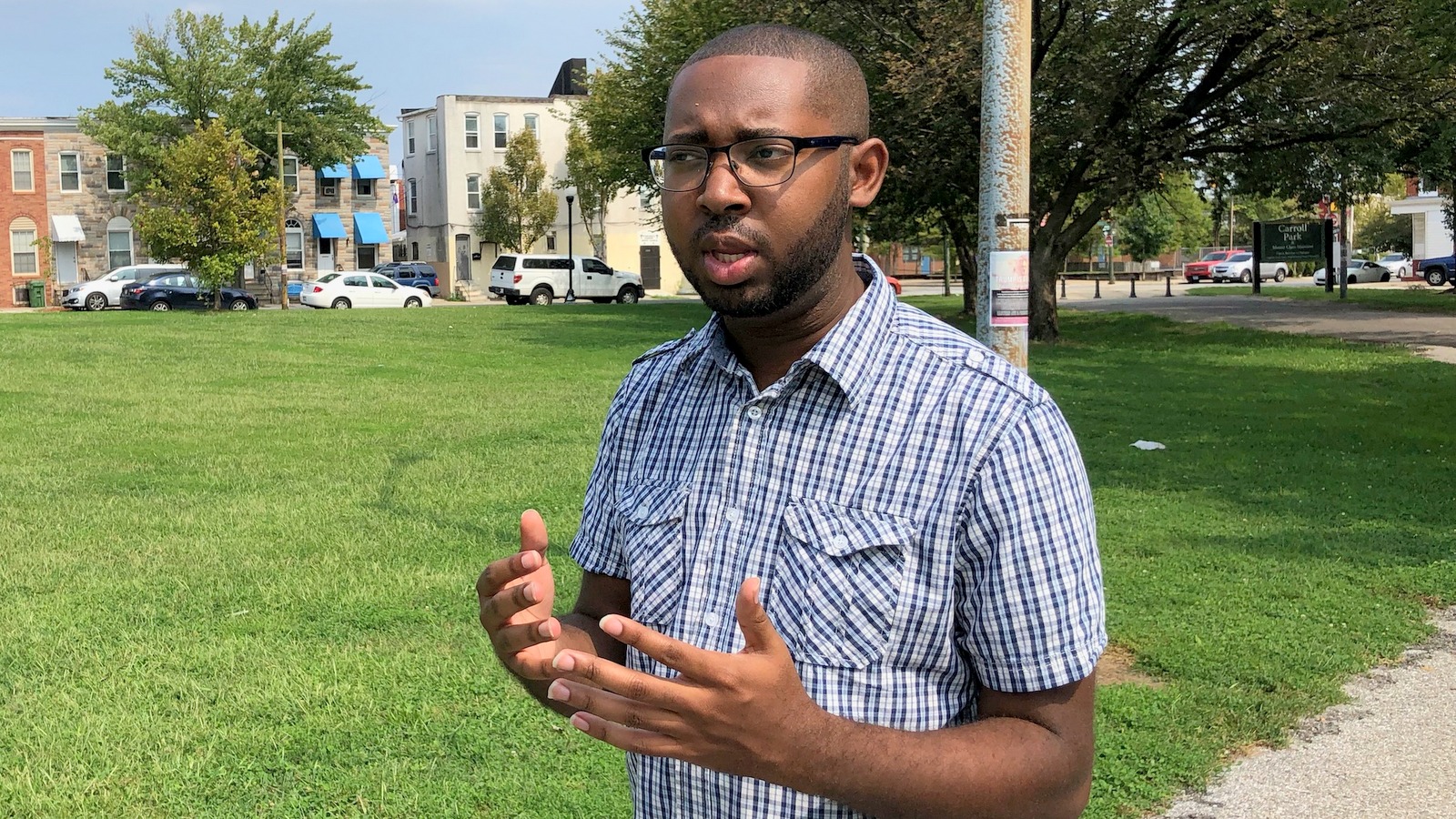 Conaway is from a local political dynasty. His great-uncle, Frank Conaway Sr., was longtime clerk of the Baltimore City Circuit Court before his death in 2015. His daughter, Belinda, is now the register of wills, and his son, Frank Jr., represents the 40th district in the House of Delegates.

Back in the fifth grade, Ray Conaway says he ran for class president, promising to take his classmates to King’s Dominion. He won the race and delivered on his promise.

Bill Marker, a longtime political, community and union activist from Pigtown, is also preparing to run.

Marker was a lawyer for the State Department of Assessments and Taxation for more than 20 years. A former president of Citizens of Pigtown and member of the 40th District Democratic State Central Committee, he founded the Boulevards Committee and the Ad Hoc MLK Redesign Committee.

He wants to make the intersection of Washington Boulevard and Martin Luther King Jr. Boulevard more walk-able, with more businesses and housing.

“It’s all about automobiles, not about people,” he said. If his vision were to become a reality, “You’d have a much more seamless city.”

Marker wants to lower the city’s property tax rate. He said people are deterred by Baltimore’s rate, which is higher than those of surrounding jurisdictions. He wants each jurisdiction to have the same rate, because “the current system hurts the majority of Marylanders.”

“We need a much more responsive councilman,” he said. He said he would be a “frequent presence at community meetings.” 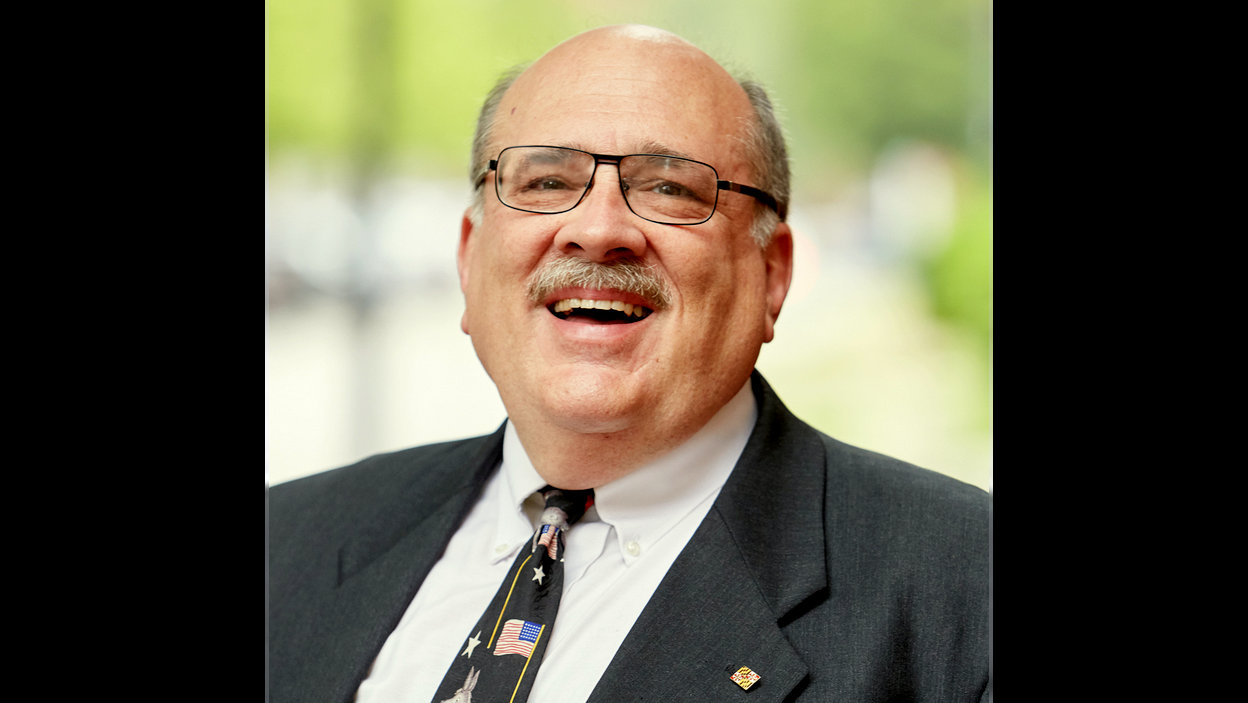