Canvassing in Morrell Park on a chilly Saturday, Phylicia Porter knocked on a lot of doors before finding people like cable company worker Michael Livingood who was happy to talk.

“I sit on my porch and watch them sell their drugs right there where you’re standing,” he complained, describing stray bullets hitting his car, drug paraphernalia on his back steps and more.

Told that she was working his Southwest Baltimore neighborhood because she is running in the June 26 primary for the 40th District Democratic Central Committee, Livingood paused.

She explained how central committees in each legislative district (pretty much the lowest-level of elected office in Maryland) are supposed to engage the voters. (She didn’t get into their biggest power: to replace legislators who leave office for whatever reason in the middle of their term.) 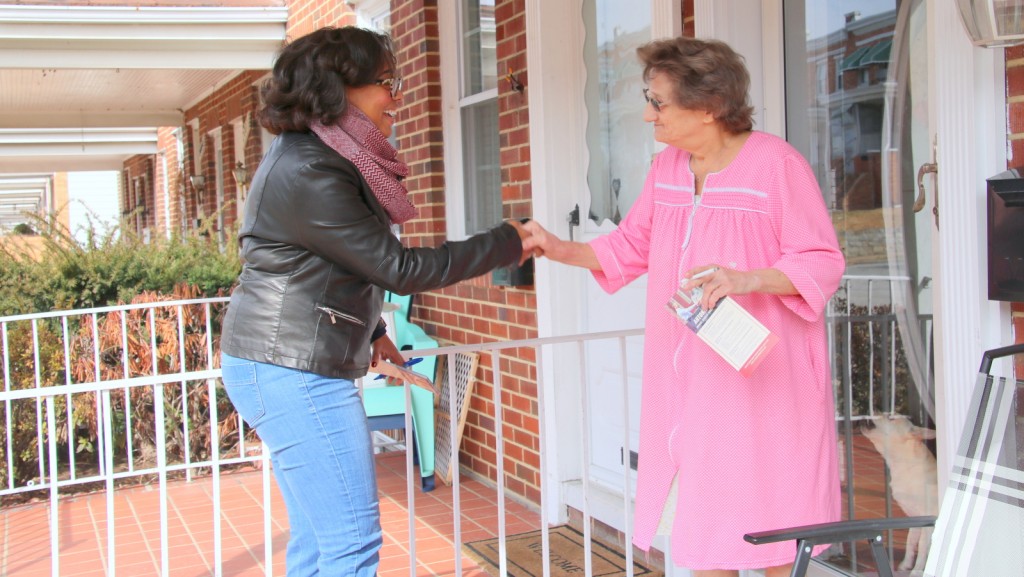 “We’ve got to take our community back,” Porter told Livingood after about ten minutes of conversation that ended with a smile, a handshake and a “good luck with that!”

The exchange captured the challenges faced not just by Porter, but by a group of about two dozen people like her (some of them in the photo above) who have come together to shake up Democratic politics in Baltimore:

• First, they have to explain what central committees are.

• Then, they have to make the case that by landing a spot there they would make a difference.

He and the other candidates in the group have the enthusiasm and social media chops to convince young voters to come to the polls, said Johnson, 30, who has sponsored a successful winter coat drive in his community for the last five years.

“We can show the community how we can give them action – now,” Johnson said. “I have nothing but hope.”

Pipeline for the Future

The group, which has been meeting over the past year to bond, trade tips and share resources, doesn’t have a name. It also doesn’t have a formal platform, though members tend to be young and progressive.

Some don’t mince words about their view of Baltimore’s Democratic Party as a complacent clubhouse clogged with insiders who are out of touch with the average citizen.

“It’s hard to fly the Democratic flag when you look at City Hall and see people like Catherine Pugh and some of the actions they have taken,” said Eric Stephenson, a project manager for a local construction company who is running for a Central Committee seat in District 44-A.

Some don’t mince words about their view of Baltimore’s Democratic Party as a complacent clubhouse clogged with insiders who are out of touch with the average citizen.

Stephenson cites Pugh’s veto of the $15 minimum wage bill (“That was a huge disappointment for Democrats”) as one of the reasons for disillusionment with the party.

“We’re hoping to put pressure on electeds that are in office and create a pipeline for the future with new candidates,” he said. “We need candidates who will really fight for us, not just toe the party line.” 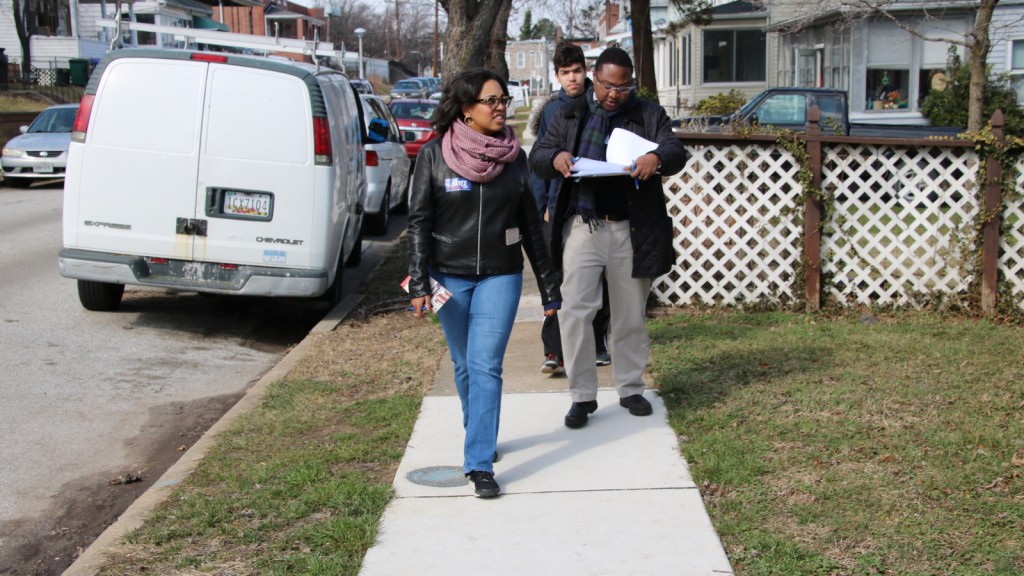 The process of building this progressive farm team has taken effort. He and others in the group have been canvassing, holding fundraisers and dropping in on local community association meetings for months.

“I’ve been out every weekend since the summer, rain or shine,” said Porter, 30, barreling down the Morrell Park street with the field director and two volunteers supporting Del. Antonio Hayes, Senate candidate in the 40th District.

The candidates hope their high energy stands in contrast to the low-voltage performance of the existing central committees, says Ben Smith, another 40th District candidate and one of the group’s early organizers.

“I found some districts where attendance last year was as low as 40%,” said Smith, a campaign and policy consultant. “There’s no job, much less elected office, where something like that would be tolerated.”

“Either Baltimore Democrats Revamp our Central Committee, Or We Invite Hogan Repeats,” was the title of the Medium piece Smith wrote on the subject, a reference to the “blue” state of Maryland electing a “red” governor, Republican Larry Hogan, in 2014.

That was the year turnout in the primary in Baltimore was an anemic 36%.

It was also the year, Stephenson recalled, that only two people ran for the seven available seats in District 44-A, leaving the other five spots vacant, filled later by the committee itself.

Other signs of weakness at the central committee level, members of this group say, are even more embarrassing. Many point to tarnished officeholders like Sen. Nathaniel T. Oaks of West Baltimore’s 41st District.

When a Senate vacancy opened up there last year, the local central committee’s choice to fill it was Oaks –  a member of the House of Delegates who had left the legislature in 1989 after being convicted of stealing thousands of dollars from his campaign account. (Voters sent him back to Annapolis in 1994.). 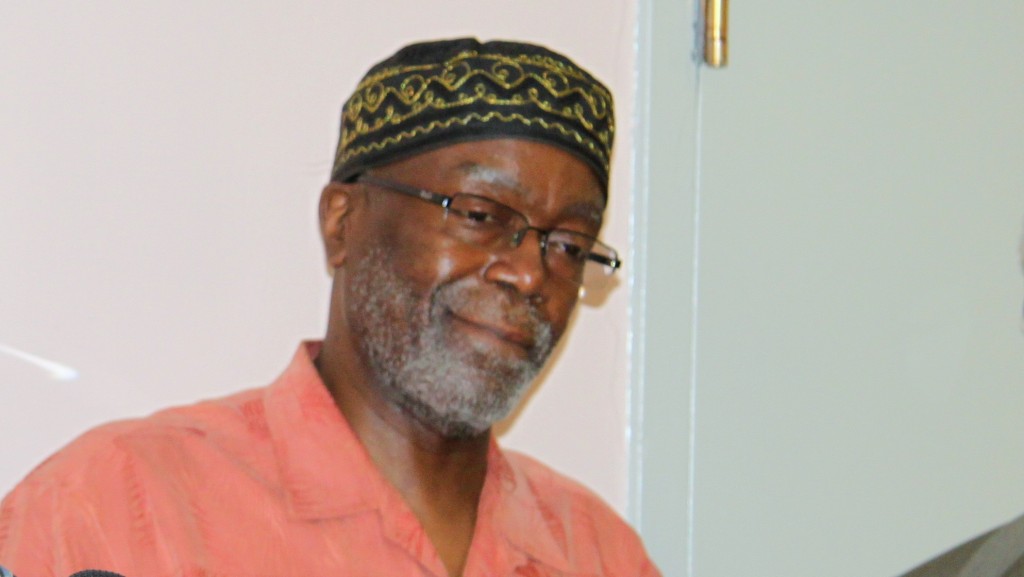 Now another cloud hovers  over the 71-year-old.

He faces federal corruption charges for allegedly taking bribes and for sabotaging another investigation by tipping off the target. (Oaks, who has pleaded not guilty, was stripped of his committee positions recently by the legislature’s ethics panel.)

“Oaks is a good example of the Democratic Party having missed an opportunity to refresh itself and not get behind candidates with a pattern of compromised behavior,” Smith said.

Changing the rules in Baltimore to prohibit people who already hold elected office from sitting on central committees would help make them less of an insiders club, several of the new crop of candidates said.

“If already-elected people are filling the seats, it doesn’t make room for new blood and energy,” said Ellie Mitchell, who is running for Central Committee in the 41st, as is Oaks. She pointed out that most of the other Maryland jurisdictions don’t allow officeholders to sit on central committees “for good reasons.”

“The way Baltimore is currently operating seems to be more about protecting incumbency than engaging the electorate or building the party,” said Mitchell, director of Maryland Out of School Time Network and a resident of Mt. Washington.

The 41st District where she’s running is a good example of the insider phenomenon. Its central committee not only includes Sen. Oaks, but Rochelle “Rikki” Spector, who locked up a City Council seat (that she inherited from her late husband) for nearly four decades. 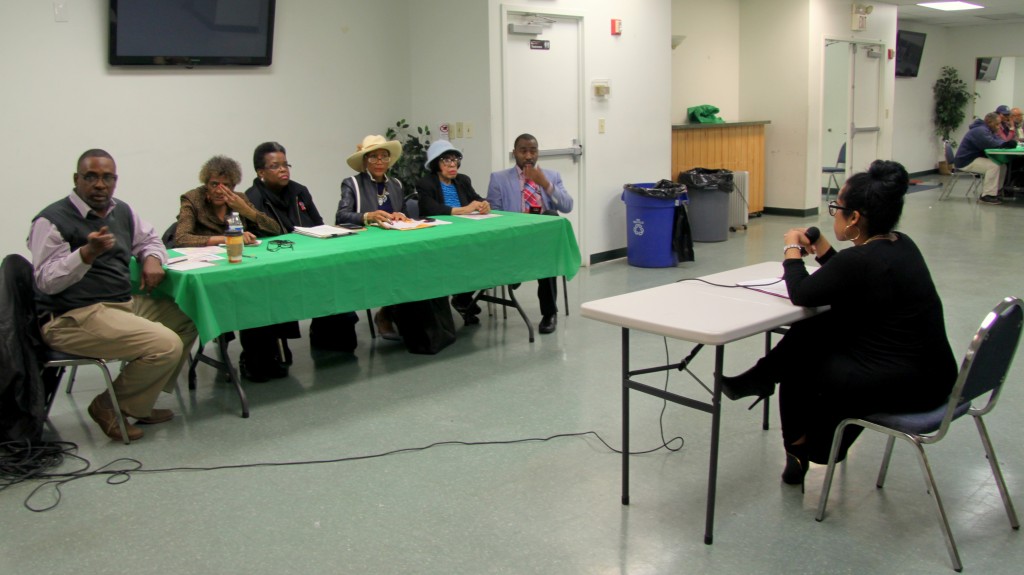 The 40th District Central Committee interviews one of its own, Tiffany Welch of the Welch political clan. Seated at far right, Mayor Pugh aide and confidante Gary Brown Jr. Agnes Welch sits beside him. (Fern Shen)

West Baltimore’s 40th District is also held up as a poster child for incestuous Baltimore politics.

This is the group that almost gave Baltimore another indicted state lawmaker. A month after the committee named Gary Brown Jr. to fill a vacancy in the House of Delegates – and just days before he was to be sworn in – Brown was indicted for election law violations.

In May, Brown, who works for Catherine Pugh at City Hall, pleaded guilty to two counts of making illegal campaign contributions. Brown is still listed as a member of the central committee.

What does this new group of would-be politicos offer instead? Varied backgrounds, for one thing. Among their members:

• A 25-year-old advocate of women’s rights who is pursuing a graduate degree at the University of Maryland School of Social Work (Paris Bienert, 46th).

Some have been inside city city government, like City Council staffer Gabriel Stuart-Sikowitz (46th), while others, like Antoinette Rucker (41st), an advocate for the homeless, have leaned more towards community organizing.

“I just got mad as hell six years ago about what was happening in Baltimore – the lack of community engagement, of accountability, of transparency,” said Porter, who works on health policy for a federal agency.

They found each other through chance and networking, said Johnson, who heard about the group when Smith brought students from the University of Maryland School of Law to help out at his winter coat drive.

An unusually large number of people are running for central committee in Baltimore this year – 102 in 2018, vs. 81 in 2014 – not all of them attending the meetings organized by Smith and Stephenson.

Others include four members of the city’s Orthodox Jewish community who are running as a slate in the hotly contested 41st.

Also running in that district is criminal justice reform advocate and Lazarus Rite founder Christopher Ervin, who has been been advocating for the needs of returning citizens and other issues.

Asked about his priority issues, Johnson cites “education and community,” speaking passionately about the need to establish kindergarten literacy programs and attack vacancy and blight.

“Rebuilding communities that look-like war-torn cities, helping people get jobs with not just wages but living wages – we’ve got to start there,” said Johnson, who serves as president of the Pimlico Terrace Association.

Spotting U.S. Senate Majority Leader Mitch McConnell at Reagan National Airport a few months ago, Johnson said, he approached the lawmaker, got a photo with him and used the moment to lobby him: “I said, ‘I need you to make DACA a priority!’” 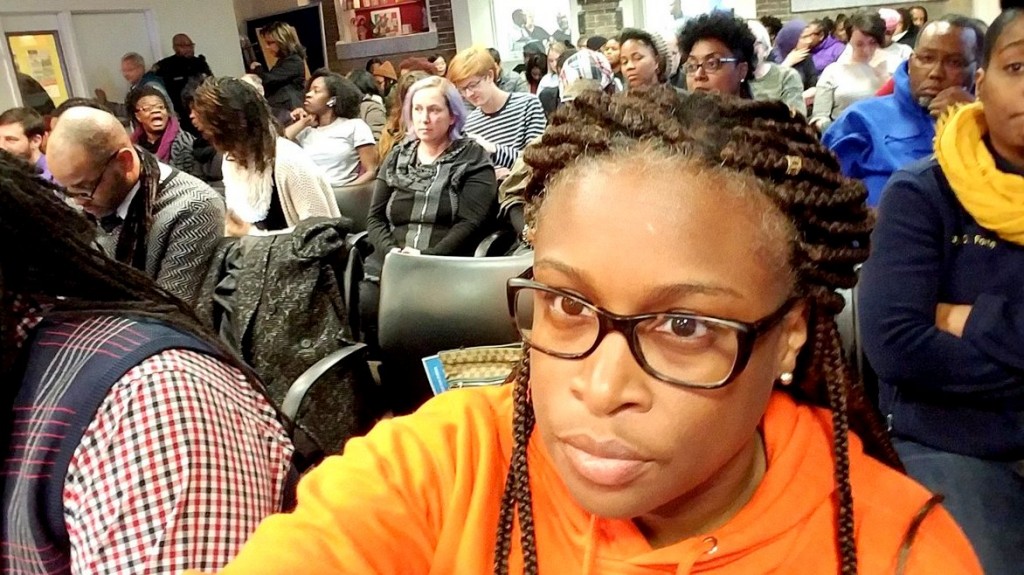 Khalilah Harris tweeted this photo from the turbulent January school board meeting where she and others addressed the unheated classroom crisis in Baltimore. (@Ed2BeFree)

Another high-energy member of the group is education equity advocate Khalilah M. Harris, a city school parent and former Obama Administration official who is running for the 43rd District Central Committee.

“We can’t wait for you to tell us what’s going to happen any further because you all don’t seem to have a level of urgency for our children,” Harris said in January at a school board meeting held after students returned from winter break to schools with broken boilers and cold, flooded classrooms.

“We sit in front of an un-elected school board. There is no accountability here,” she chided. “We are disenfranchised.”

As unsparing as her analysis is about Baltimore’s troubles, Harris told The Brew she remains upbeat about the possibility of change.

“I don’t in any way believe things feel bleak right now,” she said. “I am electrified at the possibilities to use our collective desire to see a better. stronger Baltimore.”