The Baltimore Brew was barred from the first half of a Democratic Party meeting last night to select a replacement to fill the vacancy created by the recent resignation of Delegate Cheryl Glenn amid corruption charges.

This reporter was the only member of the media present in the Humanim building when the 45th District Central Committee commenced interviewing the 13 candidates seeking to represent this struggling part of East Baltimore.

The Brew was ejected from the room by Karenthia Barber, a party official, who let members of the public enter, but said the media was not allowed at the request of Humanim, the non-profit that owns the building.

As a result, there were no reporters present when the two top vote-getters, Chanel Branch and Caylin Young, answered committee-members’ questions.

After a firestorm erupted in response to The Brew’s tweet about being ejected, the taped-up “No Media, No Live Streaming” sign was removed from the door.

Barber allowed this reporter (and a Baltimore Sun reporter who arrived later) to attend the second half of the interviews and the vote:

Branch and Young each had two votes when the tie-breaking vote was cast for Branch – by Branch herself.

Two other candidates, Marques Dent and Tiffany Jones, each received one vote. 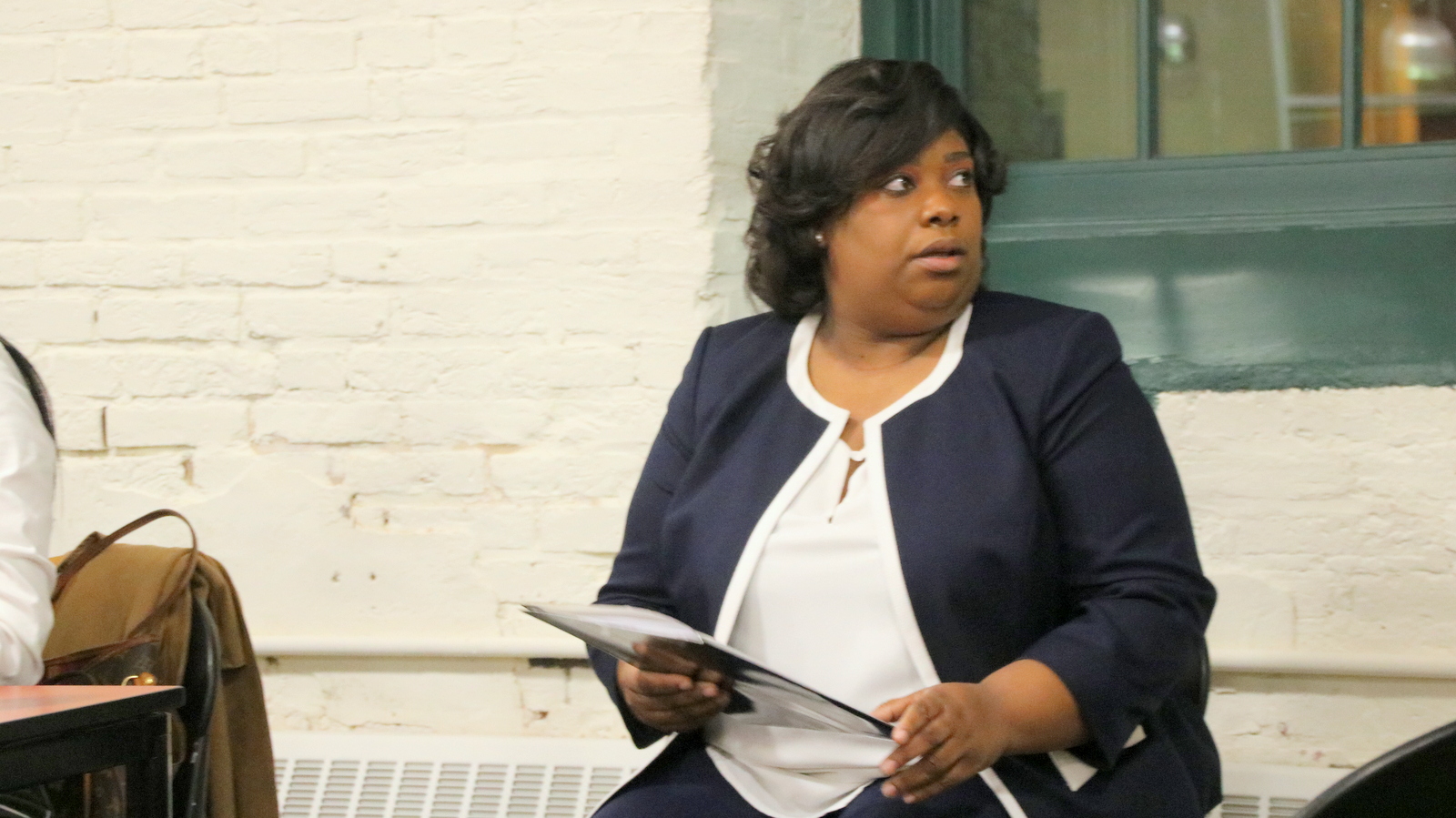 Chanel Branch awaits the results of voting that ended with her selection to fill the House of Delegates vacancy. (Fern Shen)

The 39-year-old Branch – who chairs the 45th District Committee and whose father is House Majority Whip Talmadge Branch –  became a member of the House by a 3-2 vote.

Branch said afterwards she would maintain independence from her father.

“I’m a daddy’s girl, but I’m my own person and I won’t allow our relationship to interfere with my work,” Branch said. 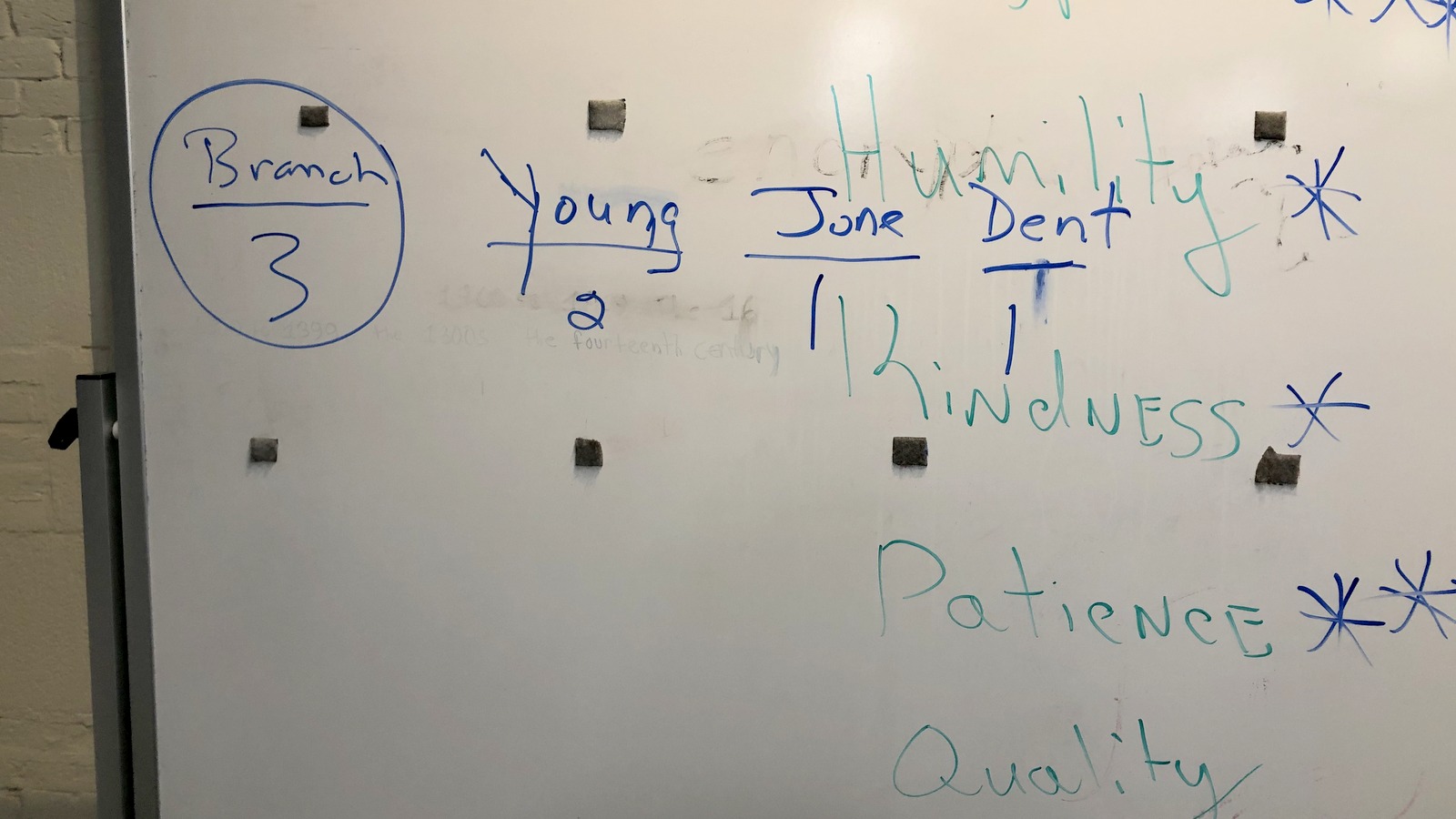 Asked her top priority in Annapolis, if Gov. Larry Hogan signs off on her appointment, Branch cited the issue of crime. She lost her 22-year-old son, Tyrone Ray, to gun violence in 2017.

She and her father were part of a lobbying effort in the legislature that resulted in an additional $3.6 million funding for Baltimore’s Safe Streets program.

Branch may have been pleased with the results, but others in the room said they objected to the way the press was excluded.

“I was shocked that they did that,” said Tiffany Jones, one of the candidates for the seat who had gone before the committee. “The public should have a chance to see all of the candidates who are wanting to represent them.”

The results of the vote should be invalidated because the committee violated party rules, says political consultant Mark McLaurin.

“I am going to be filing a complaint to the executive committee. This was absolutely outrageous,” said political consultant Mark McLaurin, one of about 25 members of the public at the meeting.

McLaurin, an at-large member of the 40th District Central Committee, said he will ask the committee “to step in and invalidate the results” of the vote because barring the media from the meeting violated the Maryland Democratic Party’s rules that say such meetings, except to discuss the candidates, must be open.

The bylaws state that the process to fill a vacancy “will provide candidates who have met the qualifications of the committee an opportunity to be heard and interviewed by the committee in a public meeting.” 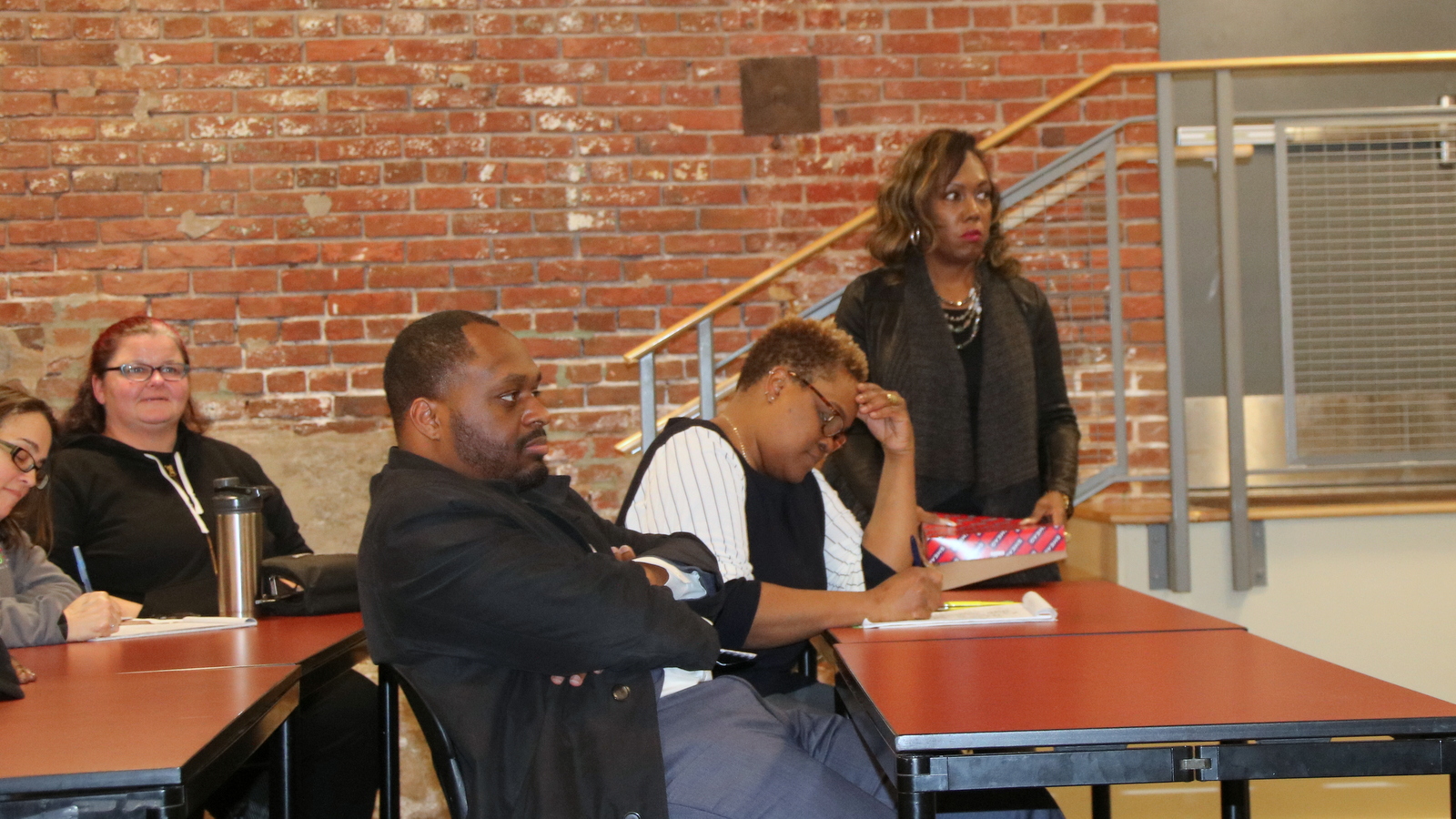 Executive Committee Chairwoman Karenthia Barber (standing) threw a reporter out of the meeting to select a replacement for Delegate Cheryl Glenn. (Fern Shen)

Barber, who as the state party’s executive committee chair was in charge of proceedings, said she was called earlier in the day by Humanim facilities manager Candace Baxter who said that media could not come into the building.

“It’s not my rules. This is a Humanim policy,” she told a reporter, after escorting her from the room. “It’s their building.”

Baxter could not be reached last night, but the non-profit group, headquartered in the historic American Brewery building, appeared to dispute Barber’s account in a series of tweets, saying “this is not our policy.” 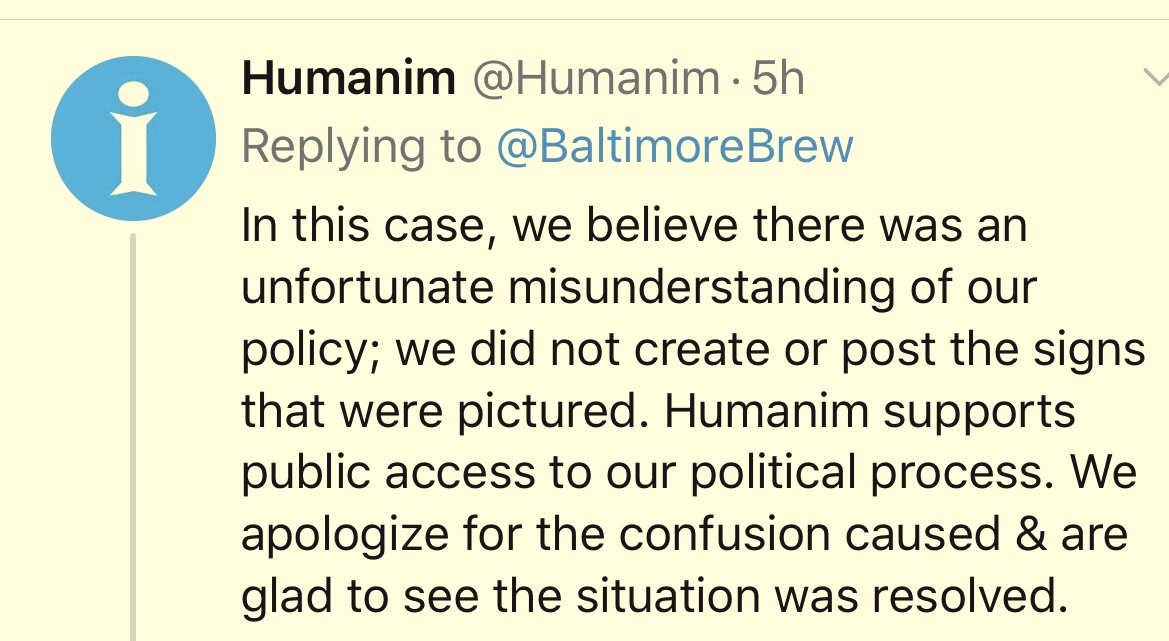 Asked online to clarify, Humanim’s reply was “we are still in the process of figuring out how the misunderstanding took place.”

Following his loss by one vote, Young said he looked forward to serving the city in his day job – legislative affairs director for Baltimore City Council President Brandon Scott.

Asked about Barber’s effort to keep a reporter out, he answered, “We have to conform to the Open Meetings Act.”

The attempt to prevent media coverage comes at an awkward time for Maryland Democrats, who have just seen a string of high-profile lawmakers resign for various misdeeds in office.

Amid charges that the clubby, cozy milieu of machine politics breeds corruption, there have been calls to change the way vacancies of elected officials are filled.

Under rules that have been in place for decades, Maryland allows political parties to make the appointments. In practice, that has meant members of the central committees often wind up voting for themselves or for family members who also serve on the committee.

In the case of last night’s meeting, two other central committee members had been on the list to seek Glenn’s seat until they dropped out at the last minute.

“Nearly 20% of the members of the General Assembly were appointed by their party when they first took office,” according to Maryland Green Party co-chair Andy Ellis in a recent op-ed. 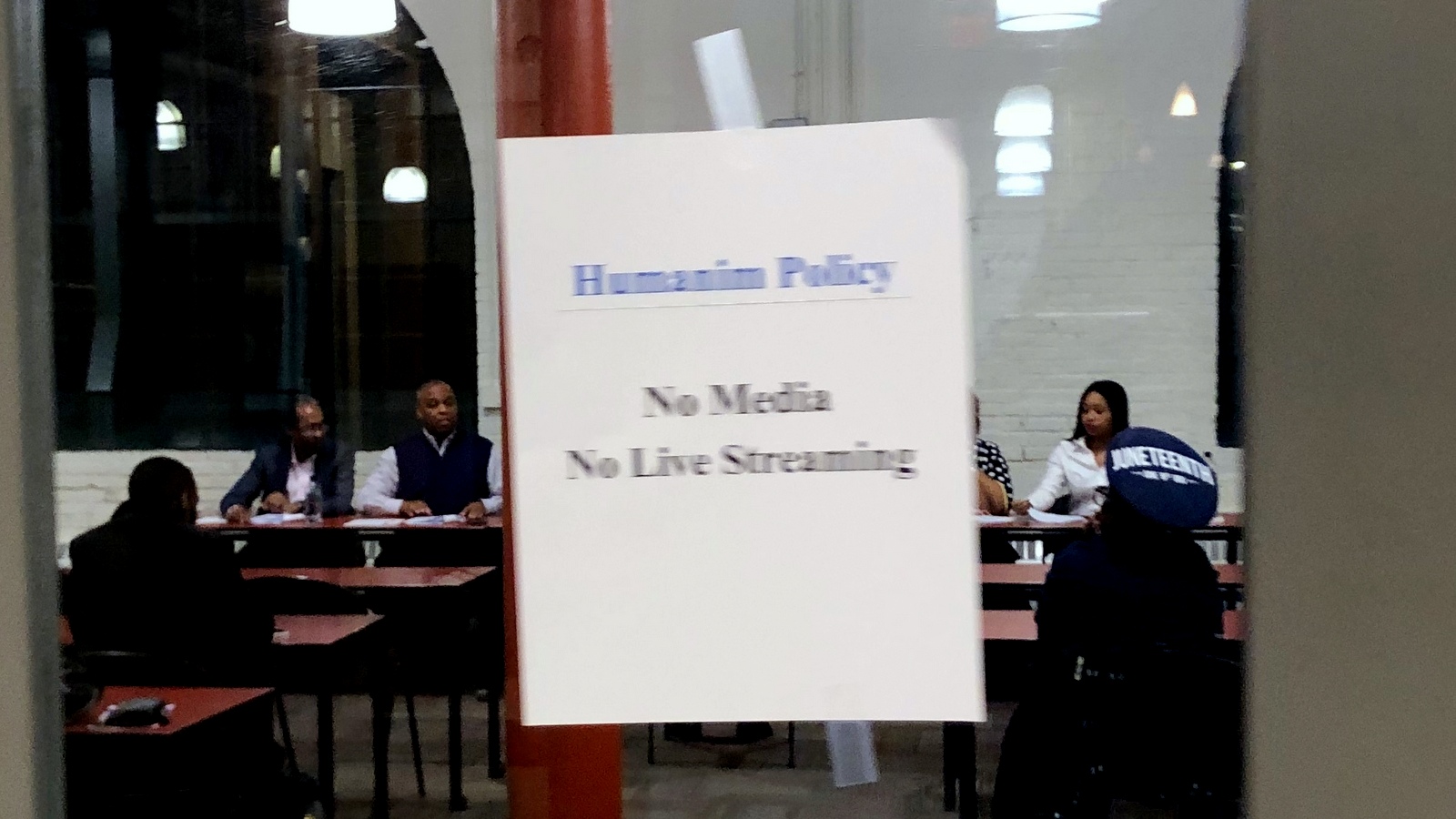 “We need to find a way to end the undemocratic appointment process,” he said, “so that every member of the General Assembly has the trust of voters by earning their position at the ballot box.”