A bill designating Woodberry a local historic district will be introduced at tonight’s City Council meeting.

This follows community outrage at the teardown of two stone houses and a redevelopment plan for the Tractor Building that has touched on accusations of political favoritism.

The destruction of the pre-Civil War houses can’t be reversed, but the bill (20-0502) could create greater hurdles for the developers, ValStone Partners and VI Development, to install a 99-unit apartment building within the shell of the endangered 104-year-old tractor foundry.

The wreckage came after the community and the Urban Design & Architecture Advisory Panel were led to believe the buildings would be incorporated into a proposed apartment building. Jennings’ company and the demolition firm were given small fines for violating city housing rules.

CHAP has set a March 10 hearing on whether to place a temporary landmark designation on the Tractor Building. 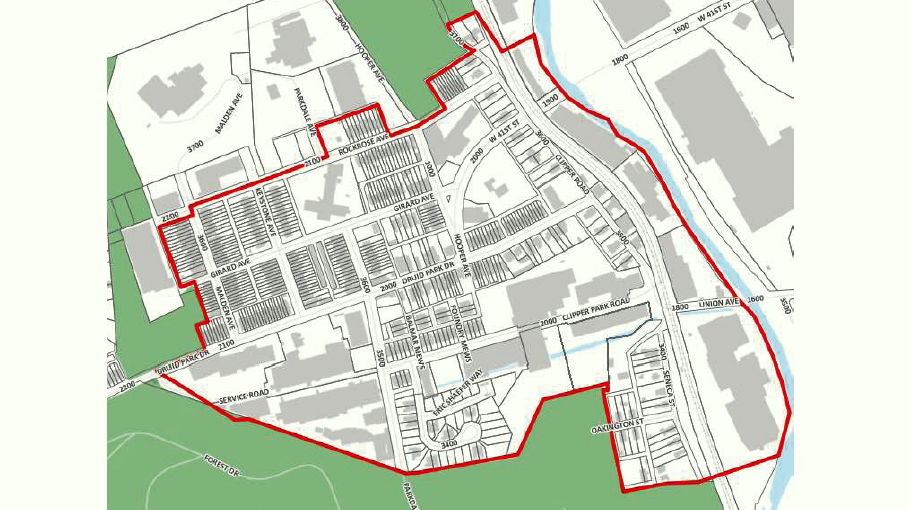 The Woodberry Historic District would encompass about 80 acres west of the Jones Falls. (CHAP)

Two weeks after Councilman Bill Henry introduced a charter amendment that would shrink the City Council, Councilman Ryan Dorsey will introduce one making it bigger.

Dorsey’s bill (20-0503) would create a 15th district. The City Council President would no longer be elected citywide; instead, the Council would make this decision every two years. It would also be able to remove the president and fill mayoral vacancies.

At the last meeting, Henry introduced a charter amendment that would reduce the Council from 15 members to nine, three of whom would be elected citywide.

Councilman John Bullock will introduce a bill creating tax incentives for businesses locating in a new 10-story building at the University of Maryland Baltimore’s BioPark.

Under the state’s Regional Institution for Strategic Enterprise (RISE)  program, institutions can apply to create zones within which businesses would get tax breaks.

The bill (20-0504) would approve UMB’s application for incentives at the 1.65-acre RISE Zone along Martin Luther King Jr. Blvd. at Baltimore Street, where the 300,000-square-foot building is planned.

Other RISE Zones are near Morgan State University and the University of Maryland, Baltimore County.

Council President Brandon Scott is calling City Schools, Health Department, Mayor’s Office of Homeless Services and others to a hearing on the well-being of the city’s transgender community.