Residents at a homeless shelter and their supporters are denouncing the shelter’s director for what they say is an inadequate response after staff contracted Covid-19 late last month.

Speaking at a protest outside Project PLASE on Maryland Avenue, resident William Miller Sr. accused its founder and director, Mary C. Slicher, of failing to require staff to wear masks and gloves and to institute other precautions against the contagious virus.

And now that staff members have contracted the disease, Miller wants PLASE to test all residents for Covid-19, a step beyond the symptom screening and temperature taking that is being performed.

“If blanket testing isn’t available for us, then we’ll continue to die,” said Miller, a 65-year-old who has lived at the shelter for nine months and organized an action that drew about 20 people today.

“I push for testing for all because of the mere fact that we’re coming out of these shelters and going back to our neighborhoods without testing, which allows the virus to keep spreading,” said Miller who, like the other protesters, wore a face mask to protect against Covid-19 transmission.

“Test one, test all,” the protesters chanted, as they stood at socially distanced intervals across the street from the shelter, which has a 29-bed capacity.

“She says she cares about us, but if you did, you would have policies in place and have contact tracing done,” Miller said, referring to Slicher. “Nobody has advocated for residents to get testing here, along with her staff. The staff is upset they have to work here.”

UPDATE – “PLASE was proactive to assuring the health and safety of the residents, way before the city responded,” director Slicher told The Brew. “The two shelter residents who put this forward know what they said is not factual and that is why none of the other residents would join them.”

Several emailed responses from Slicher – sent to us that afternoon – were missed because they went to a spam folder. They are included now in this follow-up. 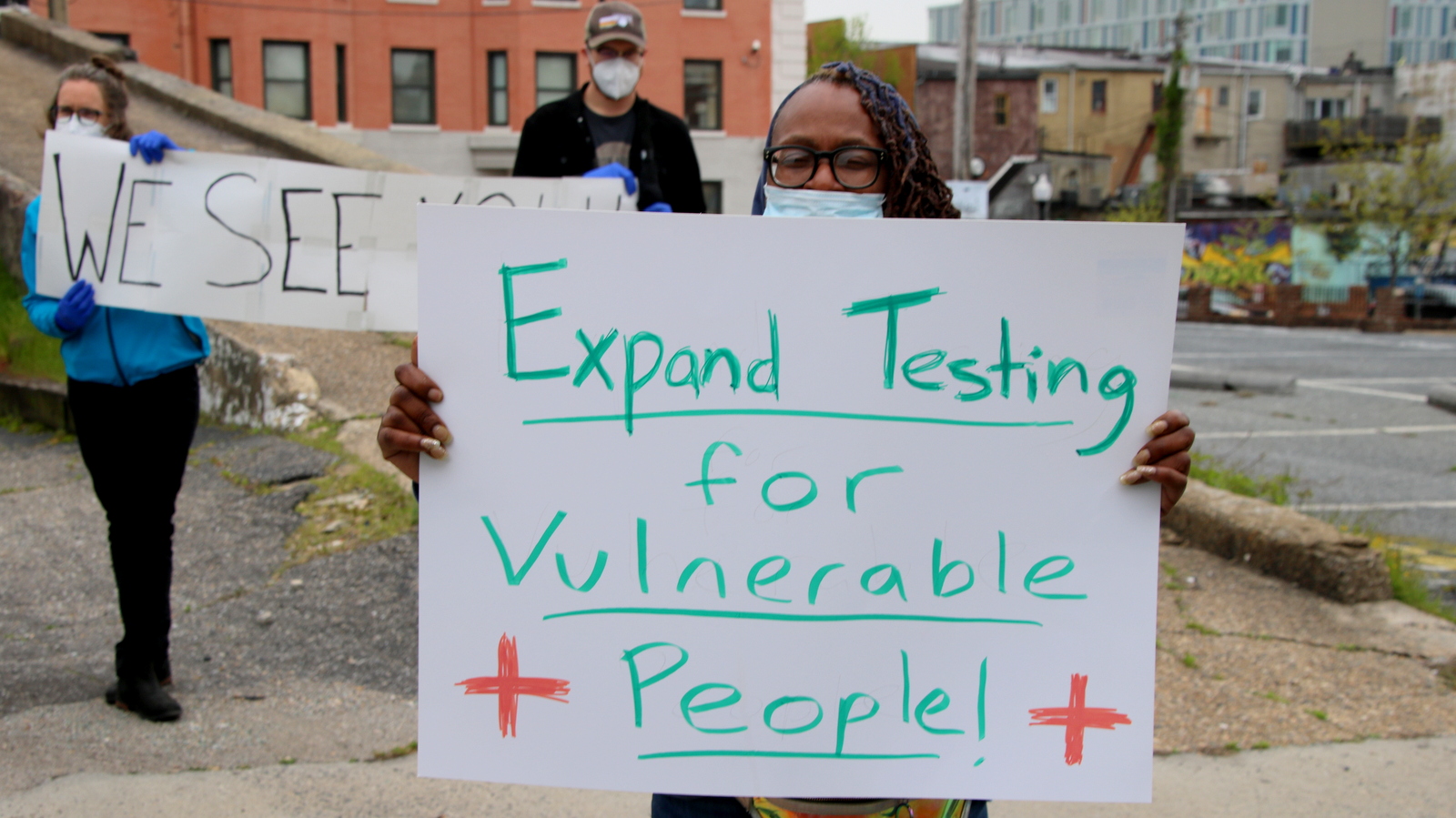 Protesters said Project PLASE must conduct testing, tracking and tracing to ensure that residents and staff do not have Covid-19. (Louis Krauss)

Before the shelter disclosed in an April 13 statement that two staffers had tested positive for the virus, residents were not aware of the outbreak, Miller said.

He believes staff had been instructed not to inform residents of the virus in March and early April, when precautions, like having staff wear masks and gloves, were not being followed at the shelter.

Miller’s claims about the timing of the staff cases and that precautions weren’t taken early are not true, said Slicher, who contacted The Brew to dispute his claims in detail.

The two staff members with the disease have not worked there since March 27, and March 31, respectively, according to the statement Slicher has posted online.

“PLASE staff and clients will continue to disinfect four times a day for all areas hands touch,” she wrote, noting that 100 masks had been donated and that more were on the way.

“All staff members and residents that must be within six feet of one another must wear a mask,” her statement continued. “Programmatic changes, such as staggering meals, have been implemented for the last month to limit contact and to assist with social distancing.” 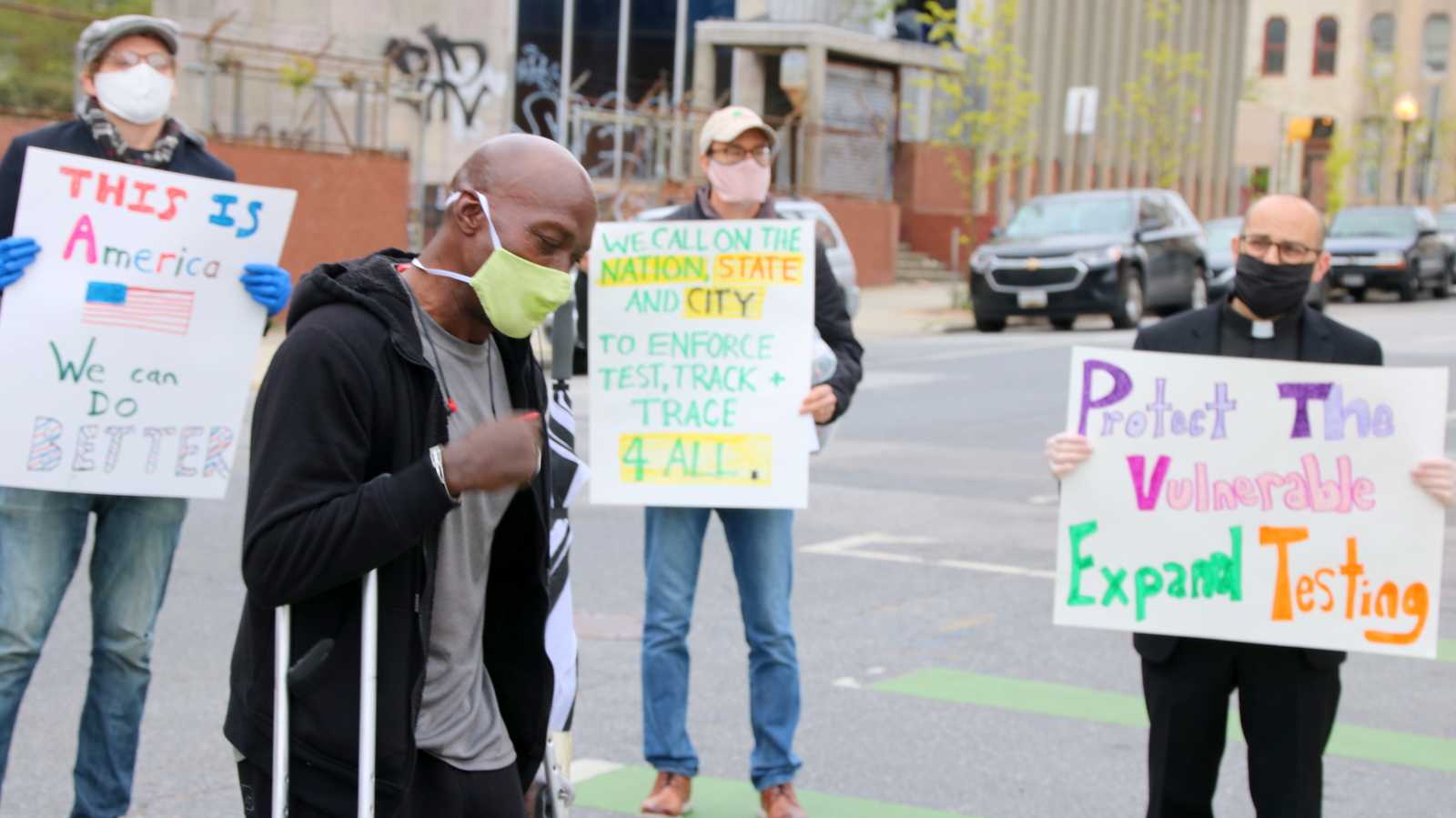 But Miller said many of these safety precautions were not adopted until after the cases were disclosed to the media.

Edward Walker, 57, another PLASE resident, agreed with Miller, saying that while some employees did wear masks and gloves, it wasn’t a widespread practice until news of the virus cases got out.

Because of the lack of precautions, residents fear that some of them are asymptomatic. Comprehensive testing is the only way to prevent the virus from spreading among them, they say.

“I’m requesting City Council President Brandon Scott, the head of the city’s health department, and Gov. Hogan to put pressure on the shelter to hold them accountable and make sure they follow through with contact tracing,” Miller said.

He said public health officials should do thorough testing, tracking and tracing to be sure they have contained the spread of the virus.

Russell Hoffses, IT manager for Project PLASE, said the city-funded shelter has been following social distancing and other safety protocols.

But Jessi Ahart, an organizer with Maryland Communities United, said she believes the shelter failed its vulnerable population.

“These are people dealing with substance abuse, HIV and a number of different medical conditions, all living in very close quarters,” Ahart said.

Kimberly Frazier-Waters, a 50-year-old shelter resident, said her counselor was one of the staff members who contracted Covid-19. She said staff was unhelpful in finding her a new counselor.

“I didn’t have anybody tell me what’s next, who I would get as a counselor next,” said Frazier-Waters, a veteran who suffers from PTSD. “I support William because he’s right. “