The director of the Mayor’s Office of Homeless Services, Jerrianne Anthony, has been placed on extended personal leave, her deputy has been fired, and her chief of staff has resigned, The Brew has learned.

The shake-up comes as the Covid-19 pandemic has infected shelter residents and forced the Young administration to move hundreds to hotels and other emergency housing amid criticism that the city’s response still leaves too many of the city’s homeless at risk.

Winston Philip, chair of the Baltimore City Continuum of Care, said he has summoned members to an emergency virtual meeting tomorrow to discuss efforts to assist homeless individuals amid the office shake-up.

He said he informed members via email that Anthony has been placed on leave, deputy director John Turner fired and chief of staff Hannah L. Roberts has submitted a letter of resignation.

Philip said he did not know what was behind the city’s moves – “as a personnel issue, that is the purview of the city of Baltimore” – but said the Continuum board has an urgent need to discuss how to do its work at a critical time.

“We need to make sure our action plan of how to support folks experiencing homelessness still is going to be carried out,” Philip said. “With this situation with the city and this public health emergency, we need to talk about how this is going to work.”

Reached by phone, Anthony told The Brew, “I have nothing to say” and referred a reporter to Sheryl Goldstein, the mayor’s chief of staff for operations.

Goldstein confirmed that Anthony has been “placed on leave,” that Turner is “no longer with the city” and that Roberts has tendered her resignation.

Roberts said in an email to the Continuum board that the administration had requested she stay with the city and remain in her position. But “after careful consideration, I have made the decision not to do so,” she wrote.

Praising Anthony for her “integrity and perseverance,” Roberts said her resignation will be effective May 29th and that she will remain in her position in order to facilitate the transfer of pertinent information” to the staff who will remain.

While the Young administration is not commenting on the shake-up, homeless service provider Christina Flowers said she believes she is at the center of it.

“Your political interests are not aligned with the mayor,” a homeless provider was told.

Flowers said Anthony planned to hire her to lead a team of outreach workers to get supplies and services to people living on the street and in encampments, but ran into administration pushback.

“She offered me the job last month on a Tuesday. On Wednesday, she says, ‘We gotta come up with a different strategy – your political interests are not aligned with the mayor,’” Flowers said today. 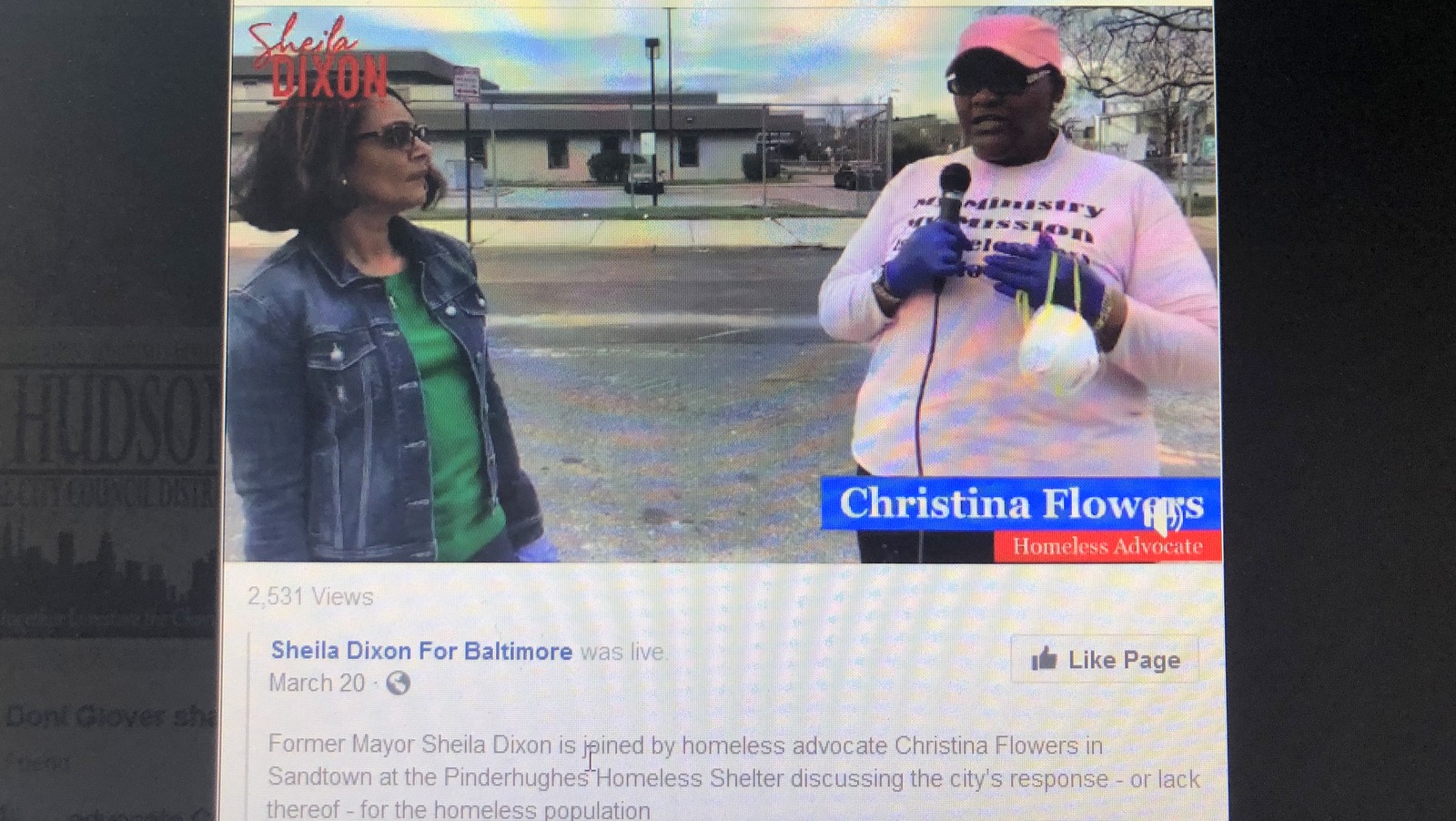 In a video filmed outside West Baltimore’s Pinderhughes shelter, ex-mayor Sheila Dixon talks with Christina Flowers about the need for better services for the homeless. (Sheila Dixon campaign Facebook)

Flowers said Goldstein raised concern at a staff meeting by showing a video featuring Flowers on the campaign Facebook page of Sheila Dixon, one of Mayor Young’s 2020 primary opponents.

“I don’t think there’s any focus on our most vulnerable population,” Dixon says in the video, standing with Flowers and gesturing at the city-run Pinderhughes shelter.

“There is no urgency, no accountability,” Flowers agrees, lauding the former mayor for her plans to eradicate homelessness and saying it was a shame that subsequent mayors “never executed them.”

Anthony, Flowers said, was pushed out because “she stuck up a little to much for me.”

Young’s spokesman Lester Davis said Flowers’ comments are not accurate and denied that Goldstein raised the issue of the Dixon video.

Flowers “was not offered a role to do outreach,” Davis said.  “All this is not true at all.”

Anthony was appointed in 2018 to the $130,000 job leading the city’s homeless services program by then-mayor Catherine Pugh.

Anthony had previously served as deputy administrator for homeless families in the District of Columbia.

Before that, she directed homeless programs for Northern Virginia Family Services. She also served as the associate director of youth programs with the District’s Department of Employment Services.

Anthony faced a number of challenges as Covid-19 has spread in city shelters and activists faulted the city for not moving more aggressively to protect homeless individuals.

Since the city began its response, some 300 of Baltimore’s homeless population have been moved into hotel rooms, and another 50 were isolated after showing symptoms or testing positive for the disease.

Another 150 had to be housed after the city-run Weinberg Housing and Resource Center on Fallsway had to be cleared out following an outbreak there.

Homeless people and housing activists say those being housed in two congregate overflow shelters are still at risk and called on the city to do more.

Phillip said the Continuum board has numerous issues to discuss at tomorrow’s meeting and in the days ahead, and not just the immediate concerns of how to get homeless people tested and treated and if possible saved from infection in the first place.

“We need a strategy after this is somewhat all over of how to return them not to the shelters,” he said. “We’ve got to really ramp up our efforts to get people into permanent housing.”

Asked how the city will be responding to the sudden leadership vacuum, Davis said they plan to hire a contract employee and also to turn to Tisha Edwards, director of the Mayor’s Office of Children & Family Success, for additional supervision.