Attorneys from the Maryland Office of the Public Defender filled the sidewalk in front of Baltimore’s Clarence M. Mitchell, Jr. Courthouse to demand changes to Maryland’s criminal justice system in the wake of the death of George Floyd.

Then they marched the seven blocks to the place where their clients are frequently held, the Baltimore Central Booking and Intake Center.

Along with their work fighting in court, lawyers must be staunch advocates for their predominantly black clients out in public, according to assistant public defender Dyan Owens.

“I have to challenge all of us: It doesn’t stop in the courtrooms any longer,” Owens said. “We have to be activists in every area that we touch, because we know that people will ignore it if they can, blissfully ignorant of what we see everyday.”

Yesterday’s protest was organized by the public defender’s office in collaboration with Public Defenders for Racial Justice and other defender offices across the county. 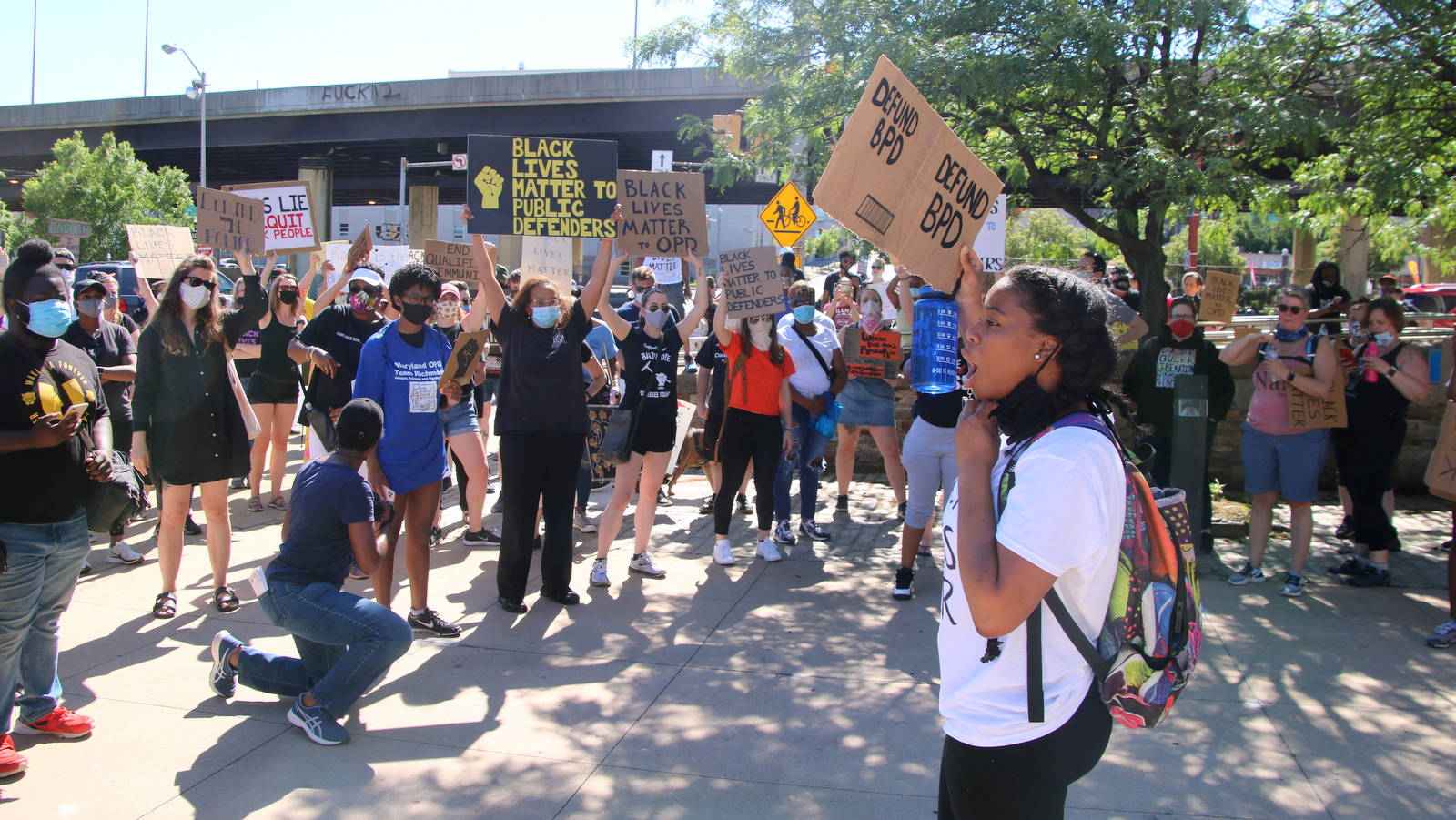 As with the demonstrations that had taken place in Baltimore for the past 11 days, some drawing thousands, the protesters that Owens addressed carried signs and shouted chants of “Black Lives Matter.”

But this group’s message also included  “Public Defenders Fight 4 Black Lives,” and “We who believe in justice cannot rest!”

Several had signs with the #8CantWait hashtag, referring to eight reforms – such as banning chokeholds and requiring officers to intervene when they see misconduct – that the group Campaign Zero says wouldn’t cost money and could be implemented immediately. 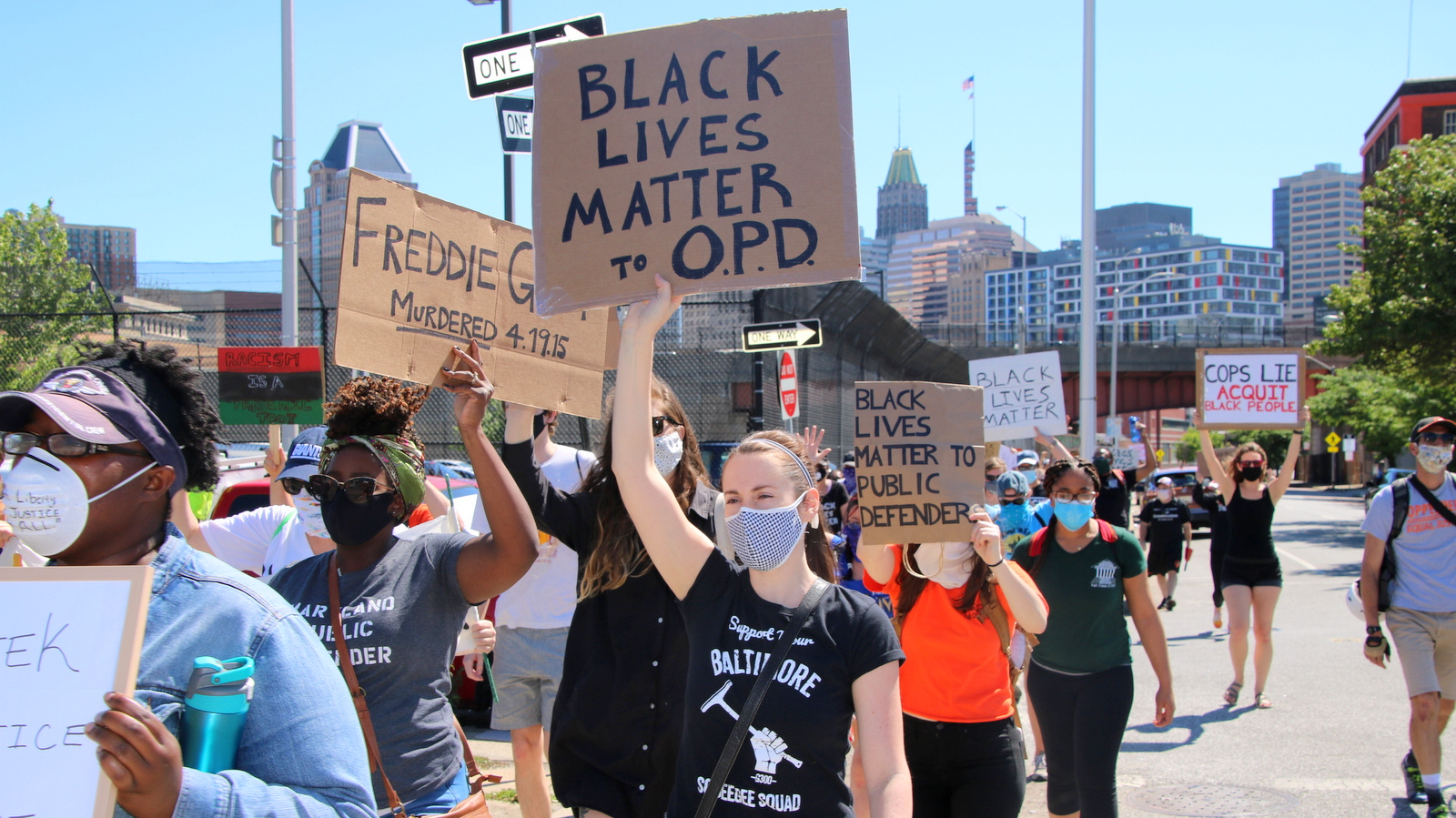 Attorneys from the Maryland Office of the Public Defender march towards Central Booking. (Louis Krauss)

At the start of the action, Maryland public defender Paul DeWolfe and the group of more than a hundred kneeled down or sat cross-legged outside the courthouse in silence for eight minutes and 46 seconds.

(This was how long police officers pinned down George Floyd in Minneapolis as he lay prone on the street, crying out multiple times, “I can’t breathe” and becoming unconscious.)

“The police murders of George Floyd and Breonna Taylor have put a recent spotlight on the everyday dangers that we’ve seen locally – most notably with the police killing of our client Freddie Gray five years ago this past April,” DeWolfe said. “Things need to change.”

As protesters listened, and as they walked along Calvert Street towards the prison, passing motorists beeped their horns in agreement, as did a couple of MTA bus drivers.

One prison employee, who declined to give his name, stepped out onto the steps above East Madison Street to watch the protesters walk by, and said he too supported their cause.

Speaking with The Brew, the attorneys said that the state’s criminal justice system is designed to unfairly target black people and that the discrimination extends to black attorneys, too.

“We have to continue to fight and not back down in the courtrooms, because even our black lawyers face discrimination, and are being bullied by judges,” OPD director of training Patrice Fulcher said.

“Representing black people across the state, we’ve seen the day-out and day-in oppression,” she continued. “It’s dramatic for our clients and for public defenders.”

Before marching from the downtown courthouses to the prison, Kirsten Gettys Downs, Baltimore City’s district public defender, listed a variety of ways attorneys can defend black communities and push for reform in the courts.

“We must stand in this space and in this time and demand justice,” Downs said, reading from a statement. 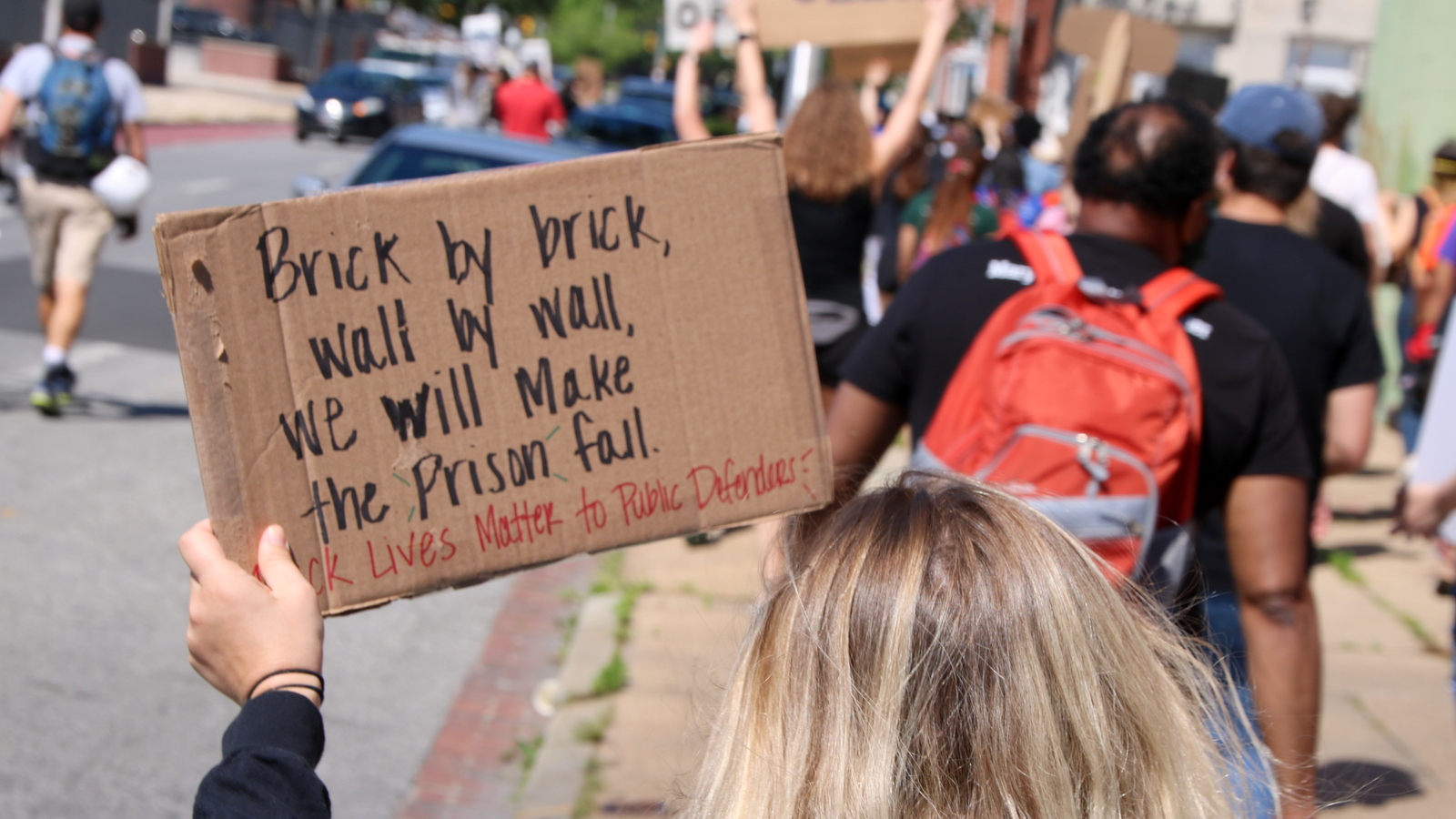 Public defenders said the high proportion of black inmates in Maryland’s prisons points to systemic racial bias that must be eliminated. (Louis Krauss)

DeWolfe said a recent study by the Justice Policy Institute demonstrates the systemic problems in Maryland.

More than 70% of the state’s prison population is black, compared with about 30% of the state population. Maryland’s percentage of imprisoned African-Americans is the highest of any state in the nation, according to the study, which was funded by the Open Society Institute of Baltimore.

The fact that racial disparities in prison populations are lessening in other states, but growing in Maryland, shows why it’s important that his office’s attorneys push for institutional reforms, DeWolfe said.

“Maryland is worse in that category than states with a history of racial hatred and discrimination,” DeWolfe declared, addressing the crowd. “We have to do better, and we can do better.”