In October 1984, when Ronald Reagan spoke in Baltimore at the dedication of Little Italy’s new Columbus statue, he extolled “the son of a Genoa weaver” as “a man of vision” who turned a “vast wilderness. . . into an economic dynamo.”

Reagan complimented the city for developing its Inner Harbor in “that same spirit” and further likened the navigator’s vision to his own as he sailed towards his second term as president.

“America has quit listening to the gloom and doomers,” Reagan said to a crowd of 4,000 that included Mayor William Donald Schaefer, Archbishop William D. Borders and other VIPs. “We’ve left self-doubt and pessimism aside. We’ve reclaimed our heritage, personified by individuals like Christopher Columbus.”

Fast forward 36 years to today, and activists vow to tear the monument down, denouncing Columbus for inflicting violence on the people he “discovered” and initiating the transatlantic slave trade.

Last year, someone draped a pair of fake severed hands around the statue’s white marble neck, a reference to how the navigator is said to have dismembered those in the local population who did not bring back enough gold to the sailors who had enslaved them.

“I feel like the world changed,” said Bill Martin, immediate past president of the Associated Italian American Charities of Maryland.

The group has an agreement with the city to maintain the statue and surrounding Columbus Piazza, located on the west side of President Street facing the Little Italy neighborhood. 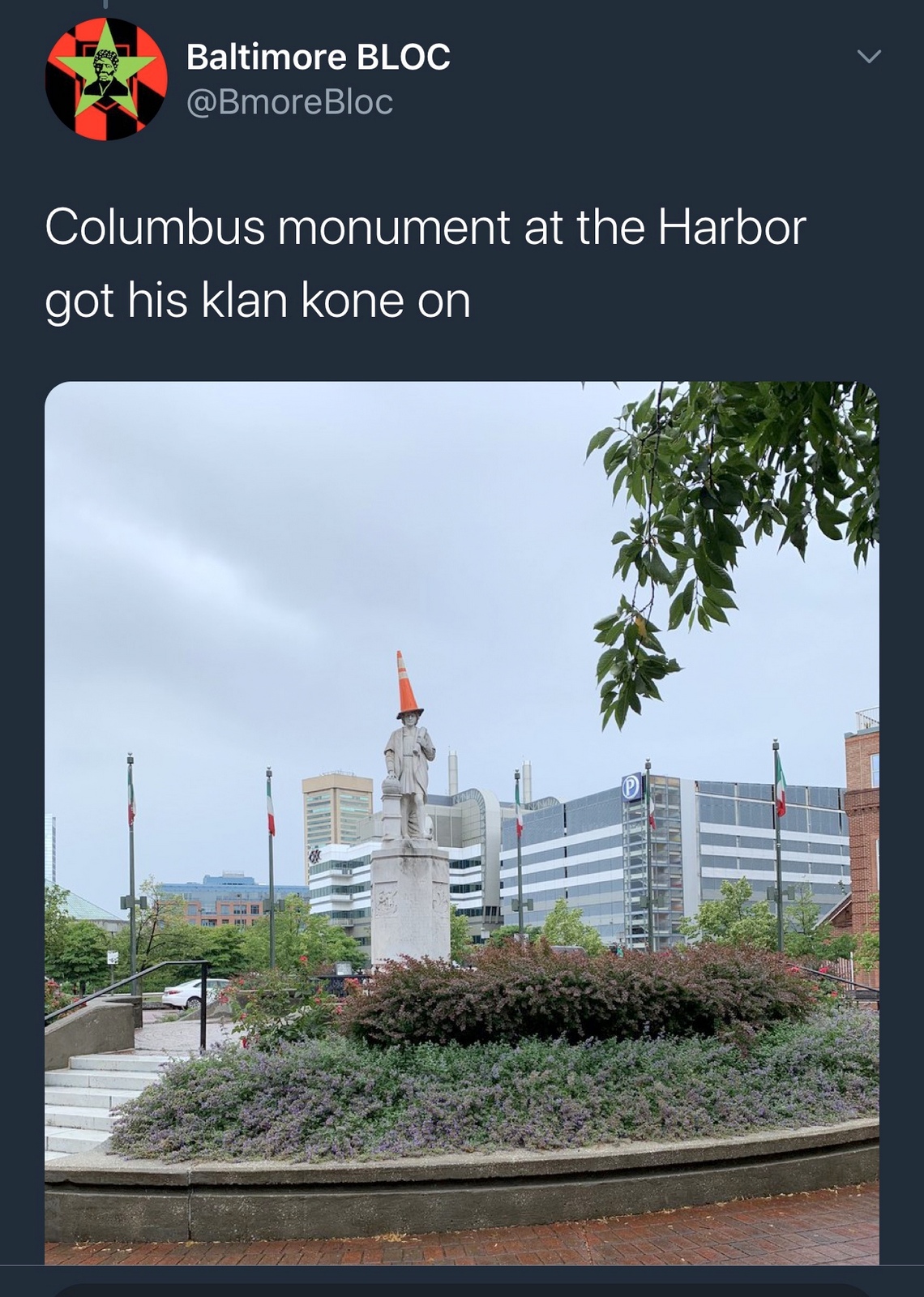 Speaking with The Brew yesterday, Martin said group members “would really like to move the statue,” but have heard that could cost up to $100,000.

“It’s incredibly expensive – it’s 14 feet, 2 inches tall and weighs 17 tons,” he said. “I don’t know how it’s connected at the base. Maybe it’s cemented in there with rebar inside.”

“And then, there’s a completely different question of where to put it,” he continued. “We don’t want it to go to somebody’s yard. They would just go after it there.”

“We want to put them off, get some time, do a fundraiser. But we don’t know who they are”  – Bill Martin.

While some talk of moving the statue, others focus on what to replace it with, Martin said. “There are all kinds of ideas floating around right now.”

And a few people defend keeping the statue in place. “I don’t want to even tell what those guys are saying,” he said.

Top city officials have not officially commented on the statue controversy, but Martin said group members who have spoken with Mayor Bernard C. “Jack” Young report he has no interest in moving it.

“They told us, ‘We don’t have the money,’” Martin said. (Young’s office has not responded to requests for comment.)

Among those pressing City Hall to protect the monument, he confirmed, is former state senator John A. Pica, now an Annapolis lobbyist.

As for Council President Brandon M. Scott, the presumptive next mayor after he won the June 2 Democratic primary nomination, Martin said, “He certainly doesn’t like Columbus.” (Scott sponsored a bill in 2016 to change the name of “Columbus Day” to “Indigenous Peoples’ Day.”)

In Baltimore and beyond there have been physical assaults on the legacy of the 15th Century navigator. In 2017, someone smashed another monument honoring Columbus, a 44-foot tall obelisk that stands at Heinz Park in northeast Baltimore.

On Wednesday, that district’s councilman, Ryan Dorsey, stood in front of the obelisk with family members who lost loved ones in encounters with police.

Speakers voiced their support for a Dorsey-sponsored bill to rename the stone pillar “The Police Violence Victims Monument.” 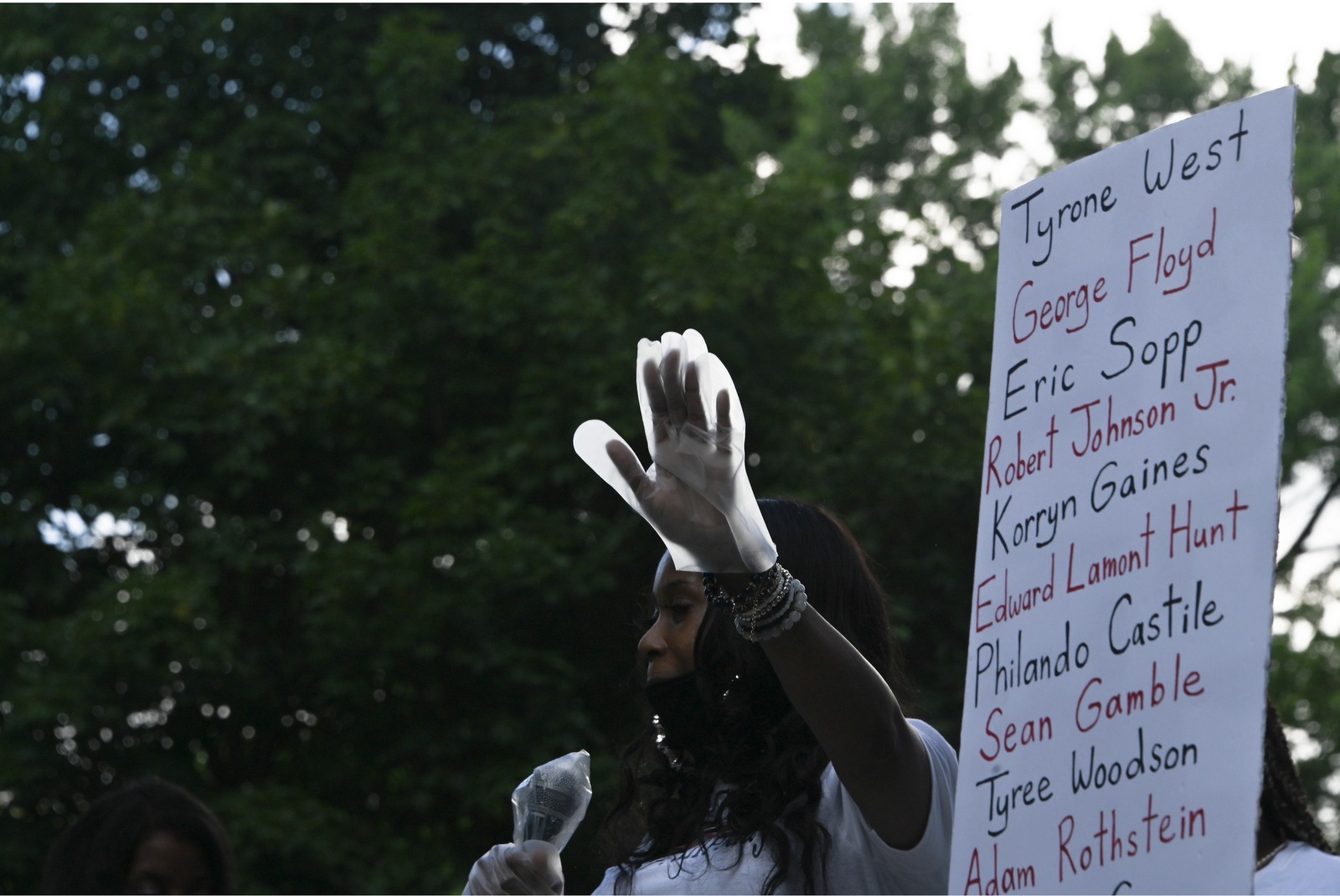 “Put our loved ones’ names in stone,” Marah O’Neal-Taylor said, addressing a crowd of about 100 people.

In other cities, Columbus statues have been toppled by crowds or removed preemptively by local officials.

The killing last month of George Floyd by a Minneapolis policeman has galvanized a nationwide reckoning on racism and police violence that has prompted monument removal and much more.

“Time for them to go”

Martin said statue supporters don’t agree with the critics (“Columbus has been terribly misunderstood”), but most feel the wisest move is to relocate it.

“They know this is a volatile topic and are asking, ‘Do we want to be associated with this? Involved in this as a community?” he said.

Martin said he had never heard of the group Baltimore Bloc, that warned on social media last month that the Columbus statues were being targeted.

The grassroots collective has been a familiar presence for years, opposing the construction of a youth jail, supporting bail reform, public housing residents, the homeless individuals who camped out in front of City Hall in 2017 and other causes – in particular, police accountability.

For a time, their website was publishing a “Wanted Wednesday” feature, calling out city officers for misconduct and brutality by name, with photos, rank and links to supporting documents.

“Don’t give Bloc all the credit if/when monuments glorifying white supremacy get hit or go down. we’re just spokespeopling for a larger bloc of kinfolk who think it’s about time for them to go,” @BmoreBloc tweeted. They said statue removal should not be considered a form of violence but “community service – collecting and disposing of garbage.”

In the wake of the warning, a group of Baltimore County lawmakers and others announced last Friday that two security guards would be stationed near the statue.

After one of them tried to shoo activist Duane “Shorty” Davis away from the monument, Dorsey obtained a letter from the city Law Department affirming that Columbus Piazza is public property and promising to remind those employing the unarmed guards they have no special authority.

Martin said they are being paid for by one of the two people involved in the founding of the Associated Italian American Charities group, which has an Ellicott City address. Martin declined to identify the person.

He said they have asked the city to put a fence around the monument to prevent its destruction until they can make arrangements to move it, but haven’t heard back.

“We want to put them off, get some time, do a fundraiser,” he said. “We want to work with them. But we don’t know who they are.”