A month after allowing bars and restaurants to serve patrons indoors, Mayor Bernard C. “Jack” Young has ordered them to suspend indoor dining, while at the same time expanding the requirements for public masking.

All people over age 2 must wear face coverings whenever they are in public and maintain a six-foot social distance when dining outdoors.

The mayor’s walk back comes amid an increase in new coronavirus cases in Baltimore and statewide, a spike so worrisome that it prompted New York to add Maryland to a list of states under its travel advisory.

Anyone now traveling from Maryland to destinations in New York State must self-quarantine upon arrival for 14 days.

Up to this point, there had been more fear of infection coming into Maryland from the outside, such as travelers visiting from Florida, North Carolina and Texas with high Covid rates.

• East and West Baltimore, hit hard by the coronavirus, push for more testing (7/10/20)

Health Commissioner Letitia Dzirasa said today’s decision was based on disease trends since the city moved to Phase 2 after Maryland Governor Larry Hogan eased restrictions statewide about a month ago.

That amounts to near doubling of cases in a week’s time, Dzirasa said at a City Hall news conference, “and it continues to increase today.”

Dzirasa acknowledged that testing in the city had increased over that time, but said the upsurge could not be explained by the expansion of testing alone.

She also noted that the disease is striking a younger demographic – “the highest incidence rates of new cases and the highest test positivity rates are now in residents between the age of 20-39 years old” – and that certain areas of the city are being harder hit.

“The daily positivity rate weekly average the week of July 1st was 5.1%, the next week, July 8th, it increased to 5.8% and this average continues to increase,” she noted.

“Certain ZIP codes – specifically the 21224 ZIP code which houses neighborhoods like Canton, Highlandtown, and Patterson Park – have seen cumulative positivity rates as high as 22% among city residents,” she said.

Covid-19 fatalities in Baltimore has remained about the same in recent weeks, the health commissioner added, noting that fatalities are often a lagging indicator and could trend upwards in the coming weeks.

Hogan, now promoting Still Standing, a memoir of his gubernatorial career and performance during the pandemic, is coming under criticism  for easing restrictions prematurely.

Dzirasa and health officials from Maryland’s five largest counties have asked the governor to bring back the restrictions he imposed earlier in the pandemic in an effort to curb the current disease spike.

On Sunday, positive cases in Maryland reached their highest point in nearly two months – 925 cases.  That was more than triple the level when Hogan announced that restaurants could resume indoor service statewide.

“We are writing to share our concerns regarding the recent increase in daily cases across the state and impact of the virus over the past week,” said the letter signed by health officers from Baltimore City and Anne Arundel, Baltimore, Howard, Montgomery and Prince George’s counties. 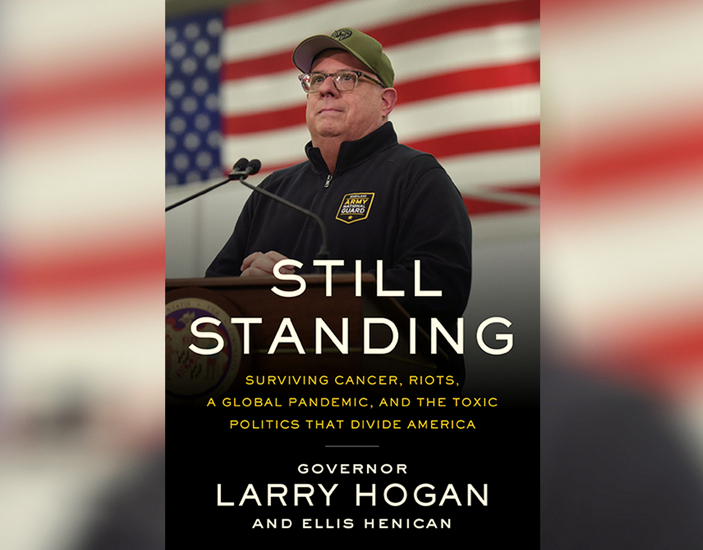 The cover of Hogan’s memoir, described by his publisher as a story of “how an unlikely governor is sparking a whole new kind of politics.” (barnesandnoble.com)

Hogan: Too Early to Tighten

During a CSPAN2 appearance yesterday, Hogan said it’s too soon to tighten restrictions on retail and restaurants.

“Our goal would be to try to keep business open and the economy unless it’s absolutely necessary,” he said.

Baltimore County Executive Johnny Olszewski yesterday issued an order requiring those over the age of 2 to wear masks in all indoor public spaces. But he stopped short of bringing back restrictions on indoor dining.

At the same time that Olszewski called on Hogan to limit dining statewide to outdoor, delivery and carryout, he said he would not do so himself because of his concern about its impact on Baltimore County businesses.