When Bryn Mawr School sophomore Kellsie Lewis and a couple of her friends asked a white student to help them learn a new Tik Tok dance during their English class, the response they got felt like a gut punch.

“She told us to ‘move like you’re picking cotton,’” said Lewis, a 15-year-old Black student who had transferred in sixth grade from a predominantly African American city school to the private, all-girls Bryn Mawr.

“I was thinking of all the analogies she could’ve used, and she picked that one,” Lewis told The Brew. “I felt ashamed, looking back on it, for not saying anything at the time.”

Lewis shared her story on an Instagram page, “Black at the Tri Schools,” which refers to Bryn Mawr, the Gilman School and Roland Park Country School, three private schools located near each other in North Baltimore.

Similar websites created to amplify Black voices around racism at private schools have sprung up across the country as part of the national reckoning following the death of George Floyd, a Black man who died after a Minneapolis police officer kneeled on his neck for nearly nine minutes.

The students’ posts describe appalling experiences, from enduring mockery and slurs to being threatened, stereotyped or just ignored, with a pattern of administrators and staff failing to address both particular racist acts and broader institutional failures.

The Baltimore privates like to describe themselves as racially sensitive and – though their student bodies remain overwhelmingly white in a 63% Black city – dedicated to improving diversity.

The schools were quick to issue statements of support for students of color and Black Lives Matter following the creation of the Instagram pages.

But the pages contain accounts of unwanted hair touching, name calling, allegations that Black students only get into selective colleges because of their ethnicity, and more.

“Swing, you monkey!” white players on the Friends School of Baltimore baseball team called out to the opposing team’s Black batter, one Friends alum recalled in the incident that happened last year. It is recorded on the Instagram page @black@fsb. 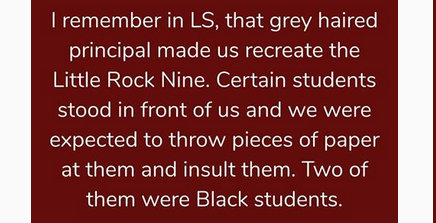 From @black@fsb, an Instagram page created “to center the voices of the Friends School of Baltimore’s Black students, alumni, faculty and staff.”

Other posts describe attempts to teach Black history gone terribly wrong – as in the time that children, including African American students, were made to stand in a group as if they were the “Little Rock Nine,” the black students whose case was a test of Brown v. Board of Education, the landmark Supreme Court decision that declared segregated schools unconstitutional.

“We were expected to throw pieces of paper at them and insult them” to mimic angry white crowds, a former student recalled.

The Park School of Baltimore and McDonogh School have also created pages at “BlackatParkschoolBaltimore” and “Blackatmcd.” 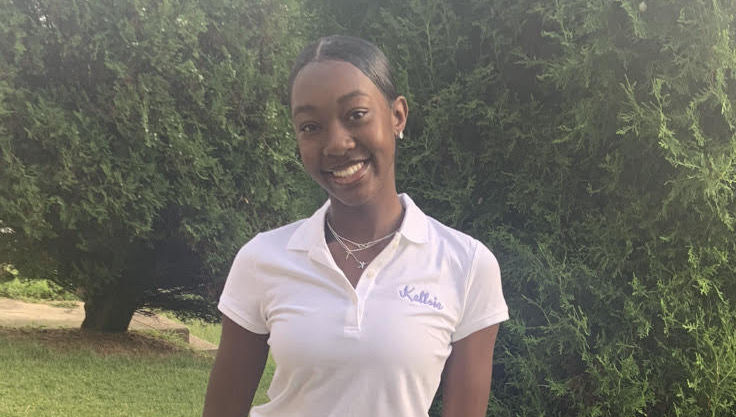 Bryn Mawr sophomore Kellsie Lewis was one of many who posted their experiences on the Instagram page, Black at the Tri Schools.

At Friends, the page has helped push the discussion of race into a rawer realm than usual for the 236–year-old institution, which strives to be liberal-minded and to resolve conflicts peacefully in keeping with its Quaker founders.

Some alums vowed never to give a cent to their alma mater after seeing the posts. Others called the school’s head, Matt Micciche, an example of “white mediocrity,” accusing him of being “unwilling to lead on racial justice for over a decade.”

The “listening sessions” Micciche initiated after the Instagram accounts surfaced struck some as just the latest empty words in response to years of complaints. The sessions would later be cancelled by the school in response to the criticisms that they were redundant and wouldn’t lead to concrete changes.

“It is sickening to see some of those stories are so hauntingly similar, down to the same teachers,” one staffer wrote. “What happens to the complaints that are brought to the administrators’ attention? What is the process?”

Micciche told The Brew that upon seeing the posts he felt pain and sorrow, but he also wasn’t entirely surprised.

“We’re a microcosm of society. While we’ve long worked hard to not recreate those inequities, I was aware we did not always manage to rise above them,” he said.

Still, he added, “anytime you hear of someone recounting a moment they felt belittled or devalued, based on their identity, it’s heart-wrenching.” 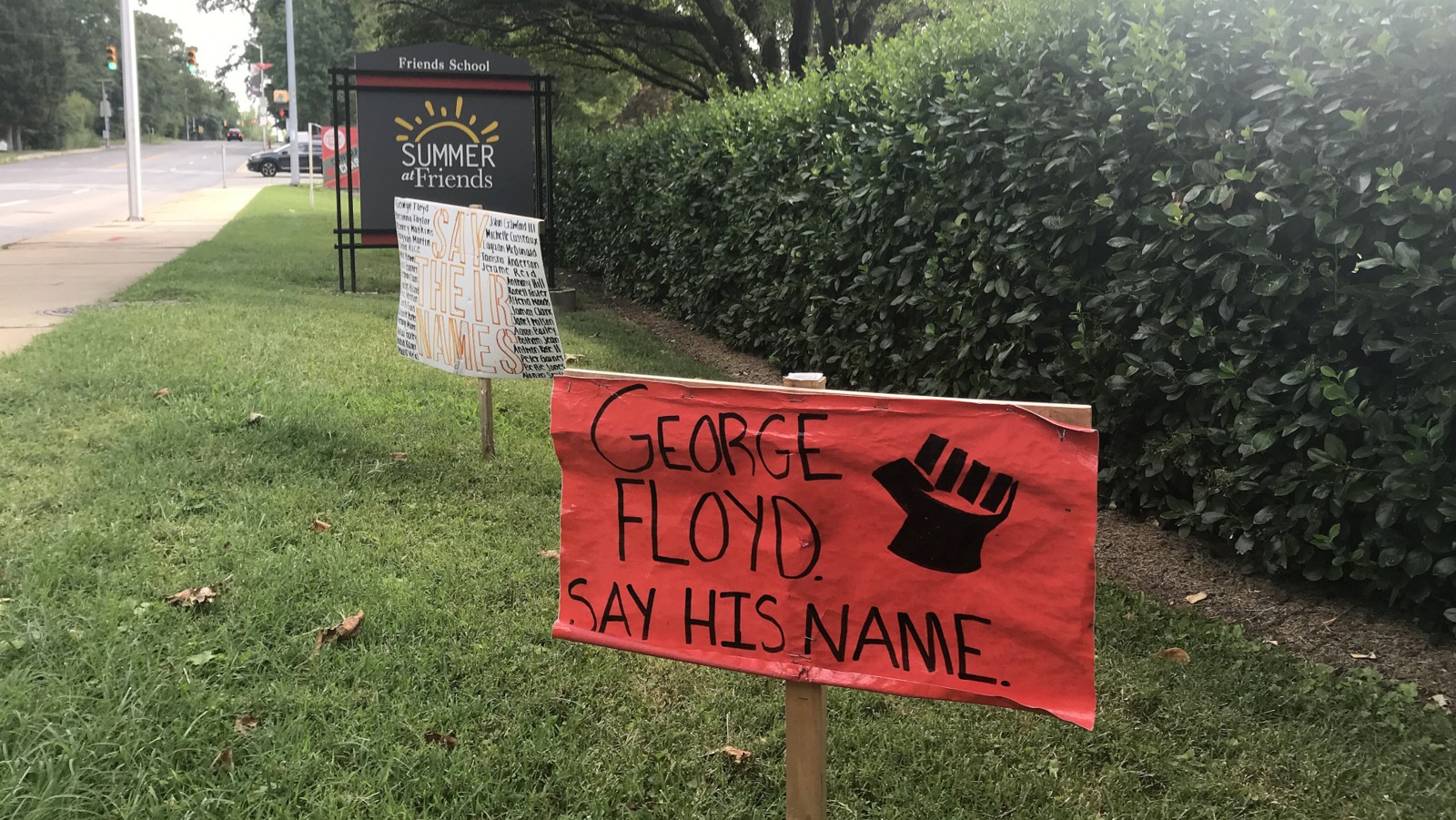 Signs outside of the Friends School reference George Floyd and other victims of police violence. (Louis Krauss)

Students, faculty and alumni of color from Friends have posted, mostly anonymously, hundreds of personal experiences of racism ranging from events in the 1970s to the past school year.

One perennial issue popping up is white students remarking on or complaining about Black students’ hair and touching it without permission.

Class of 2020 Friends student Camryn Carroll posted about a presentation she and fellow Black students organized to explain the different ways of styling African American peoples’ hair – and the fact that it is unacceptable to reach out and touch it.

“The reasons I got from people touching our hair were because it’s ‘exotic,’ kind of like a fetishization, which I took offense to,” Carroll said in an interview. “They would say, ‘Oh, this is new today,’ before touching it. But, it’s like, I’m not a zoo animal here for you to touch my hair.”

Less than an hour after the presentation, Carroll said, some white students were still curious and tried to touch a Black classmate’s hair.

Asked how he is responding to the page, Micciche said the school is working hard to put policies and plans in place for the upcoming school year, while also balancing those efforts with a long term vision.

Since the Instagram page was created, Friends has posted regular updates titled “A Commitment to Racial Equity,” which have included policies that prohibit inappropriate hair touching and efforts to improve the school’s retention and hiring of people of color.

“We’re looking at every aspect of what we’re seeing there and following up in all the ways needed,” he said.

One Friends teacher, who helped organize the page, was skeptical.

“It is traumatizing to see him listen, taking notes, and then see him stumble over a not even half-hearted apology. Just stumble and apologize that we experience these things,” the teacher, who asked not to be identified, said in a phone interview.

Despite the criticism, staff and students did credit Friends with making a major effort to bring in new teachers of color for the 2019-20 school year.

Between 12 and 15 teachers and staff members of color were hired last year, Micciche told The Brew. He said about 20% of the student population identifies as Black and 9% identify as bi-racial. However, some teachers added that many of the school’s staff members of color departed at the end of the school year, citing racism as one of the reasons why some of them left. 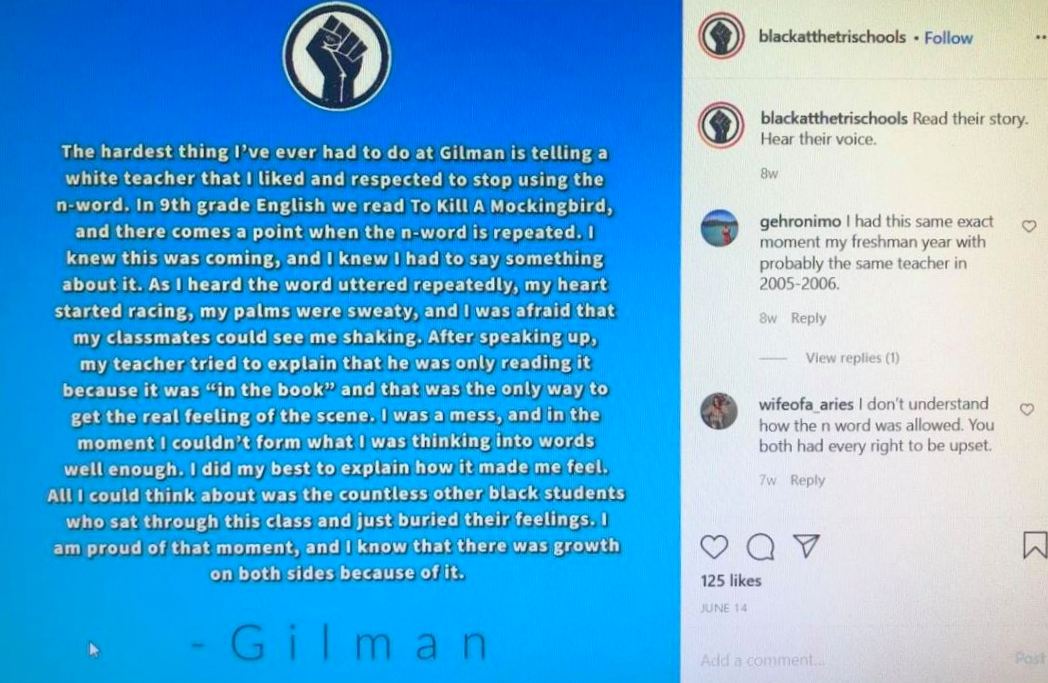 A Black student’s experience at the Gilman School in Baltimore, posted on the Instagram page Being Black at the Tri Schools.

Across the hundreds of posts on “Black at FSB,” the one that got the most comments highlighted Micciche’s annual pay: nearly $400,000 according to a 2018 public IRS 990 form.

(This was based on $283,000 of “reportable income” from Friends and another $114,000 in “other compensation from the organization and related organizations.”)

Some questioned why his salary should be posted on a page bringing attention to racism.

“How are you raising awareness of the mistreatment that POC in the community go through?” one commenter said. “This is going too far.”

But fifth grade teacher and 2012 alum Nabil Odulate said the post is relevant.

“I think it’s right to say where the school chooses to invest its money does indicate what it values,” said Odulate.

Micciche declined to comment on the specifics of his salary and questioned the relevancy of the post, saying it is “not focusing on the core issues.”

“I take the issue of resources,” he said. “I think every resource could be used in a different way, and I think people have the right to question that. It is interesting, when there are so many important issues being raised, that that would generate a lot of traffic.”

When compared to other Baltimore private schools, Micciche’s salary was not out of the ordinary.

For example, Gilman headmaster Henry Smyth had total compensation of $401,065, according to its most recent 990 form, while Christopher Post, headmaster for The Boys Latin School of Maryland, was showing $460,452.

Two posts from the “Black at Park School Baltimore” and “Being Black at McDonogh” pages.

While the Micciche salary post generated multiple comments on the Friends page, the hot post on the Tri Schools page brought attention to one community member who saw the school’s stance opposing racism very differently.

It reprints two letters from a Gilman parent blasting the school for releasing statements in June, written by 18 administrators and headmaster Smyth, in support of Black Lives Matter.

(The post doesn’t say who uploaded the letter other than it being a 2008 Gilman alum.)

White privilege and racism “have perpetuated in our society for more than 400 years and at Gilman School since its inception,” the school leadership’s statement says, announcing, “no longer will we stay complicit.”

In response, the parent’s letters – entitled “Best response to racial nonsense ever” – call white privilege “a reckless term” and “throwaway rhetoric with nothing to back it up.” 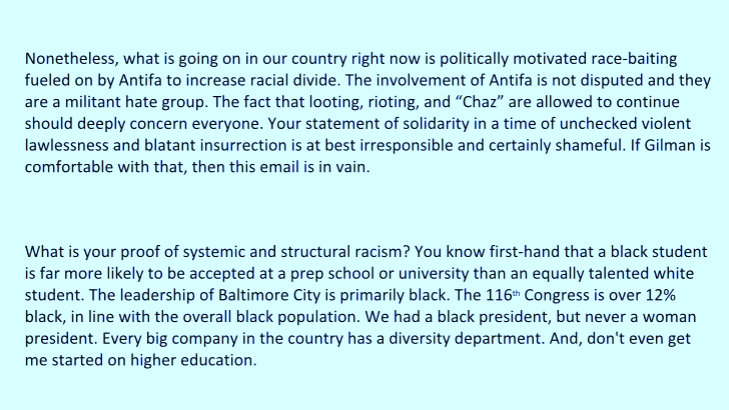 Excerpt from a parent’s letter critiquing the Gilman School administration for posting statements in support of Black Lives Matter. (blackatthetrischools)

In a tirade aimed at the administration, the parent claims that systemic racism against Black people doesn’t exist and that police brutality is propaganda.

“What is your proof of systemic and structural racism?” the parent wrote. “You know first-hand that a black student is far more likely to be accepted at a prep school or university than an equally talented white student.”

The parent complains that “America’s police force is being demonized by the behavior of a few rogue officers.”

Hundreds posted comments denouncing the parent’s message, with many saying its racist message validates the efforts of the Black at the Tri Schools page.

“The author of this letter is not the only one who holds these deeply racist sentiments,” one comment reads.

“Not just at Gilman, but all throughout predominantly white institutions in Baltimore and beyond,” it continues. “Call them out and hold your institution to the highest standard. We do not tolerate the language outlined in this letter.”

The parent implored Gilman’s administration to “for god’s sake take the email [in support of Black Lives Matter] down from the homepage of the website.”

As of this morning, it remains on the site.

• To reach this reporter: lkrauss2@gmail.com