Three other city agencies have been hit by senior staff departures in the wake of the sudden firing of Baltimore Housing Commissioner Michael Braverman and resignation of his top aide 2½ weeks ago.

None of the personnel changes has been disclosed by the Young administration.

Foremost was the removal last Thursday of William Vondrasek, the No. 2  administrator at the Department of Recreation and Parks.

Vondrasek was escorted out of the Ralph W.E. Jones Jr. Administration Building in Druid Hill Park after being told to resign, retire or be fired on the spot, two informed sources tell The Brew.

He reportedly chose to resign.

His position was advertised on governmentjobs.com on Friday, with the agency saying it is seeking “an innovative, collaborative, results driven and highly experienced individual” as deputy director.

Yesterday, David Carter, chief of park maintenance, announced his resignation after 34 years at the department.

A message left at Vondrasek’s residence seeking comment about why he left was not returned.

A horticulturist by profession, Vondrasek was hired by Rec and Parks in 2004 and was named chief of parks in 2009. He’s been deputy director since 2013 and twice served as acting director.

Described by an employee as “a climber and company man who did what he was told,” Vondrasek was viewed by some as a stabilizing force in a department that has seen four different directors in the last 10 years.

He was intimately involved in a 2017 deal that allowed BGE to clearcut a two-mile swath of wilderness land in Leakin Park for a natural gas pipeline.

Catherine Pugh agreed to sell the right-of-way for just $1.4 million to BGE, whose CEO, Calvin Butler, and other top executives were major backers of her 2016 mayoral campaign.

Three other senior officials have been pushed out. They are:

• Johnnie R. Hemphill, chief of staff at the Department of Public Works.

• Kenith Ching Jr., operations chief at the Department of Transportation.

The latest upheaval at DPW follows a pattern of senior resignations that began after Director Rudy Chow was forced to retire in February.

Several of Chow’s top appointees have left the agency.

They include Lauren Swiecicki, chief of engineering and construction, who resigned in May. Carlos A. Espinosa quit as chief of asset management not long after a Brew report about his role in not reporting a fish kill at Leakin Park to the Maryland Department of the Environment.

Hemphill was recruited as Chow’s chief of staff in August 2017. Last week he stepped down from what was considered the second most senior position in the department. (At $185,000 last year, Hemphill actually earned more money in FY20 than Acting DPW Director Matthew Garbark).

Hemphill formerly worked for the Washington Suburban Sanitary Commission, where Chow had also served as a chief engineer, and lives in Washington.

Phillips, who worked closely with Hemphill, also resigned from her $126,000 position. 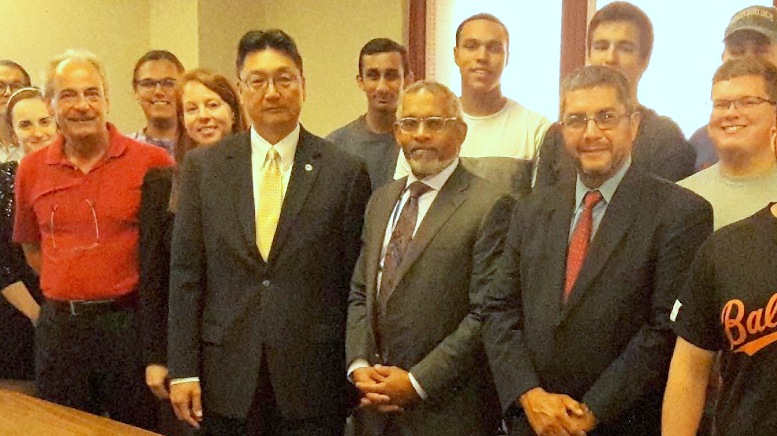 Johnnie Hemphill (center, dark tie) during a visit last fall to a UMBC class by DPW Director Rudy Chow. Also shown are Lauren Swiecicki (at Chow’s right) and Carlos Espinosa (at Hemphill’s left). Both have since left the agency. (umbc.edu)

Ordered from on High

Sources tell The Brew that the departures were largely engineered by Kimberly B. Morton, chief of staff for outgoing Mayor Bernard C. “Jack” Young.

Last year, Young reinstated Morton to the mayor’s office after she had transferred herself to DPW after a falling out with former mayor Catherine Pugh. (Morton’s current $206,000 salary is paid through DPW, not the mayor’s office.)

Young has given Morton great leeway in hiring and firing decisions, including the appointment of her former deputy, Matt Garbark, as acting director of DPW.

Hemphill was considered a professional administrator who was part of the Chow team. Phillips, who lives in Upper Marlboro, was recruited by Chow in 2011 when he was first hired as DPW’s water bureau chief.

At DOT, Ching was considered a “survivor” – an at-will employee who had worked for seven city administrations and hung on through the tumultuous reign of Michelle Pourciau, who was fired as DOT director in 2019.

As operations chief, Ching helped supervise many DOT contracts, including millions of dollars going to Lorenz, Inc., for highway and median-strip grass mowing.

The Pikesville company came under fire by Mayor Young for sloppy work before Young and the rest of the Board of Estimates reversed itself and approved the contracts (here and here).

Ching was soon to complete his 38th year in city government when he was told to leave his $131,000 job last week.