Many preservationists are alarmed by a New Jersey developer’s plan to buy Mount Vernon Place United Methodist Church because they don’t want to see the building demolished or insensitively altered.

For Norman Bosley the issue is more personal: He doesn’t want to see history lost.

“I have a deep and peculiar interest shaped over time,” he wrote in a letter to the Baltimore Planning Commission. “My father, Dr. Harold A. Bosley, was pastor there from 1938 to 1947. My childhood is rich with tales which evoke John Ruskin’s view that architecture embodies people’s values and history. Though he wrote of European culture, such is true here, too.”

A retired college professor now living with his wife Karen on the Jersey Shore, Bosley is 84 and has vivid memories of how the church served Baltimore in World War II.

“During the war years, servicemen were housed in our basement halls; there were bowling alleys there too. My father married many young couples on the eve of overseas duties at war. Sometimes I was the only witness.”

His family’s history is part of the church’s history as well.

“In 1945, my older brother was killed in an accident in Montana,” Bosley said. “He was 11, and the chapel there was named in his memory: Sidney Stanton Bosley. The congregation wished to express its sharing of love and loss ‘in perpetuity.’ My wife and I married there in 1964; my mother’s funeral was held there in 2004; my father’s funeral was held in the main sanctuary in 1975.

“I sincerely hope,” he concluded, “it can be preserved as is and will urge all authorities to stay the shaky hand of developers.”

Norman and Karen Bosley are among a growing contingent of individuals and organizations who are expressing concerns about Joseph Novoseller, the developer who has a contract to buy the church and Asbury House church office building at 2-10 East Mount Vernon Place.

According to informed sources, Novoseller has a contract to buy the church and companion Asbury House for about $1 million from the Baltimore-Washington Conference of the United Methodist Church.

Even before the sale is completed, Novoseller has been trying to sell Asbury House for at least $900,000. 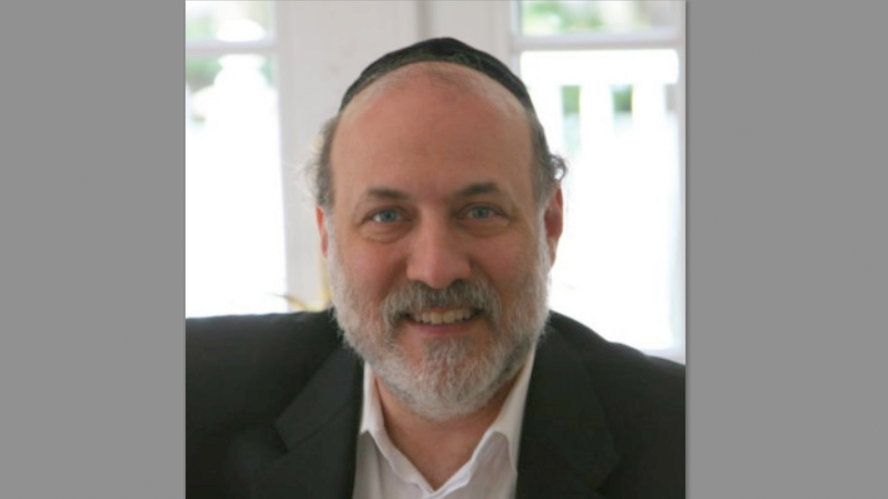 But before he can flip the brownstone at 10 East Mount Vernon Place, Novoseller needs approval to subdivide the property.

The Baltimore Planning Commission will hold a virtual hearing to consider his request on Thursday. (Agenda and link to meeting.)

A sign on the church alerting the public of his application has triggered the outpouring of concern, especially from people who were not aware that the buildings might change hands.

Planning department employees have gone on Facebook to say that the proposed land subdivision simply separates the buildings in the city’s land records, creating two properties from one.

Their messages echo those of the developer – namely that the church will be protected from demolition because it’s in a historic district monitored by the Commission for Historical and Architectural Preservation. (CHAP).

But preservationists say CHAP didn’t do much to protect the childhood home of musician Cab Calloway from the wrecking ball, even though the city owned the property.

They note that CHAP didn’t even hold a public hearing on the demolition, even though hundreds of people from around the world signed petitions urging the city to save it. They also point out that the Planning Commission has been sued twice in the past year for decisions that favored a developer in Clipper Mill.

The Mount Vernon Place Conservancy does not support the subdivision. “We would like to see a realistic redevelopment and financing plan before we would be in support of a subdivision,” said executive director Lance Humphries.

Baltimore Heritage also opposes the zoning change, with executive director Johns Hopkins saying, “There should not be a subdivision until there are plans for both parcels, and we have not seen any plans for the church parcel.” 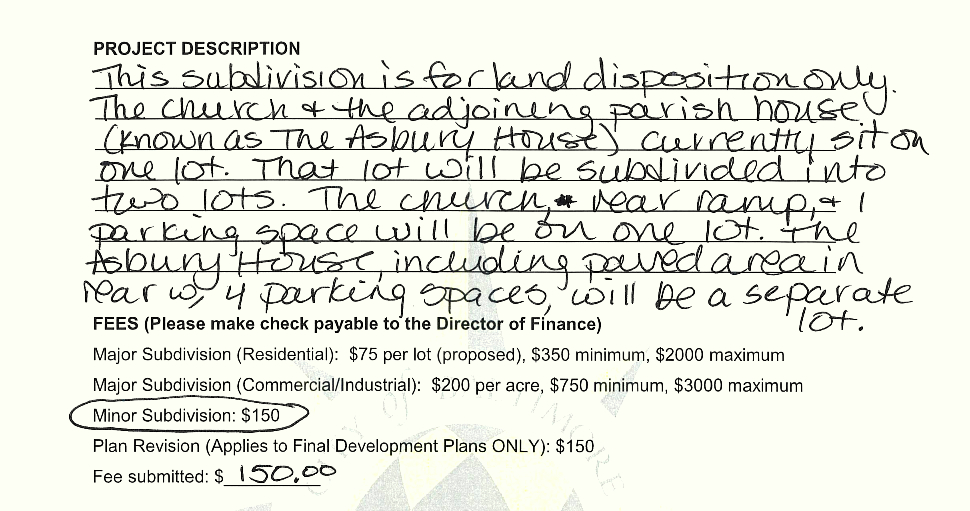 Part of the issue with subdividing the property is that, with the Asbury House property sold, there would be little space to repurpose the church for contemporary uses.

They say the church will likely need new mechanical systems, stairways, elevators and wheelchair-friendly restrooms if a future owner wants to use it as a place for performances or public gatherings. With Asbury House and its rear parking lot off the table, the church would have fewer options for making necessary improvements.

Chris Regan, a partner in Tower Hill Atlantic and Tower Hill Properties, said he doesn’t think a for-profit developer would necessarily be the best steward for a one-of-a-kind property such as the church.

“In my opinion the church (and maybe Asbury) needs to be categorized more like the Washington Monument and less like a piece of real estate,” Regan said in an email message. “It should be considered part of the parks and the overall environment much like the Walters and Engineers Club, which aren’t just pieces of real estate.” 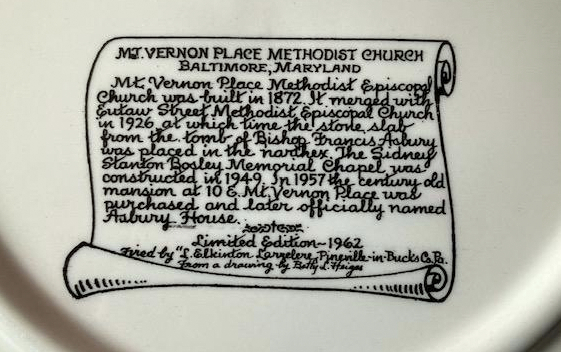 Back of the commemorative plate that briefly describes the church’s history. (Norman Bosley)

Gretchen Edwards, whose family owns property near the church, said she’s disappointed that the Methodist conference would be willing to sell its property to a developer, given the role the church has played in the history of American Methodism and Baltimore City.

Edwards said she thought the Methodist Conference launched a national fundraising campaign to restore Lovely Lane United Methodist Church for continued use for religious services. She wondered if a similar fund drive would be appropriate to keep the church in Mount Vernon active. “Why don’t they do that?”

But a Lovely Lane church official, Jackie Noller, says it was the congregation itself that made a national appeal for help.

David Bosley, another son of the former pastor, said he can’t bear the thought of the church being converted to something such as a brewpub.

“It’s amazing the French go crazy to rebuild the Notre Dame Cathedral after the fire, and in the U.S. we want to turn a gorgeous historic church into a brewery to make money!” he wrote in an email, apparently referring to a recent church conversion in East Baltimore. “It’s embarrassing that such an idea is even seriously entertained.”

“We believe in him”

Stephen Ferrandi, a real estate broker representing the Baltimore-Washington Methodist Conference, said on a Webex call with the community last month that the church can’t afford to maintain it properly and that’s why it wants to sell the buildings to Novoseller.

“We like working with Joe on this project because we believe in him,” Ferrandi said. “We understand what his vision is, and his vision shares the conference’s vision. . . to restore the building and use adaptive-reuse principles.”

Thursday’s hearing before the Planning Commission comes two months before Mayor Bernard C. “Jack” Young leaves office, a time when many developers are making last-minute requests for zoning and land use approvals that promise to benefit them.

Novoseller is represented by Caroline Hecker of Rosenberg Martin Greenberg, a lawyer who often represents developers and businesses such as Royal Farms that seek to develop properties in ways that the surrounding communities oppose.