It’s a memory care and assisted living facility that would house about 120 people in 110 units on three levels, with the average age of a resident in the mid-80s.

These are a few of the details about the project that representatives from Claiborne Senior Living of Hattiesburg, Miss., shared last night during a Zoom meeting with residents who live near the proposed development site.

The meeting represented the first time that Claiborne principals have talked about the project in an open forum since they got the land under contract earlier this year.

The 12.7 acres just east of the “Falls at Roland Park” apartment building, at Northern Parkway and Falls Road, is under contract from Blue Ocean, a local developer that had faced strong opposition for a six-story apartment project it wanted to construct on the wooded hillside.

Claiborne would build on less than half the property it buys, about six acres, and agree never to develop the rest. Once the transaction is complete, Blue Ocean will no longer have any stake in the property. 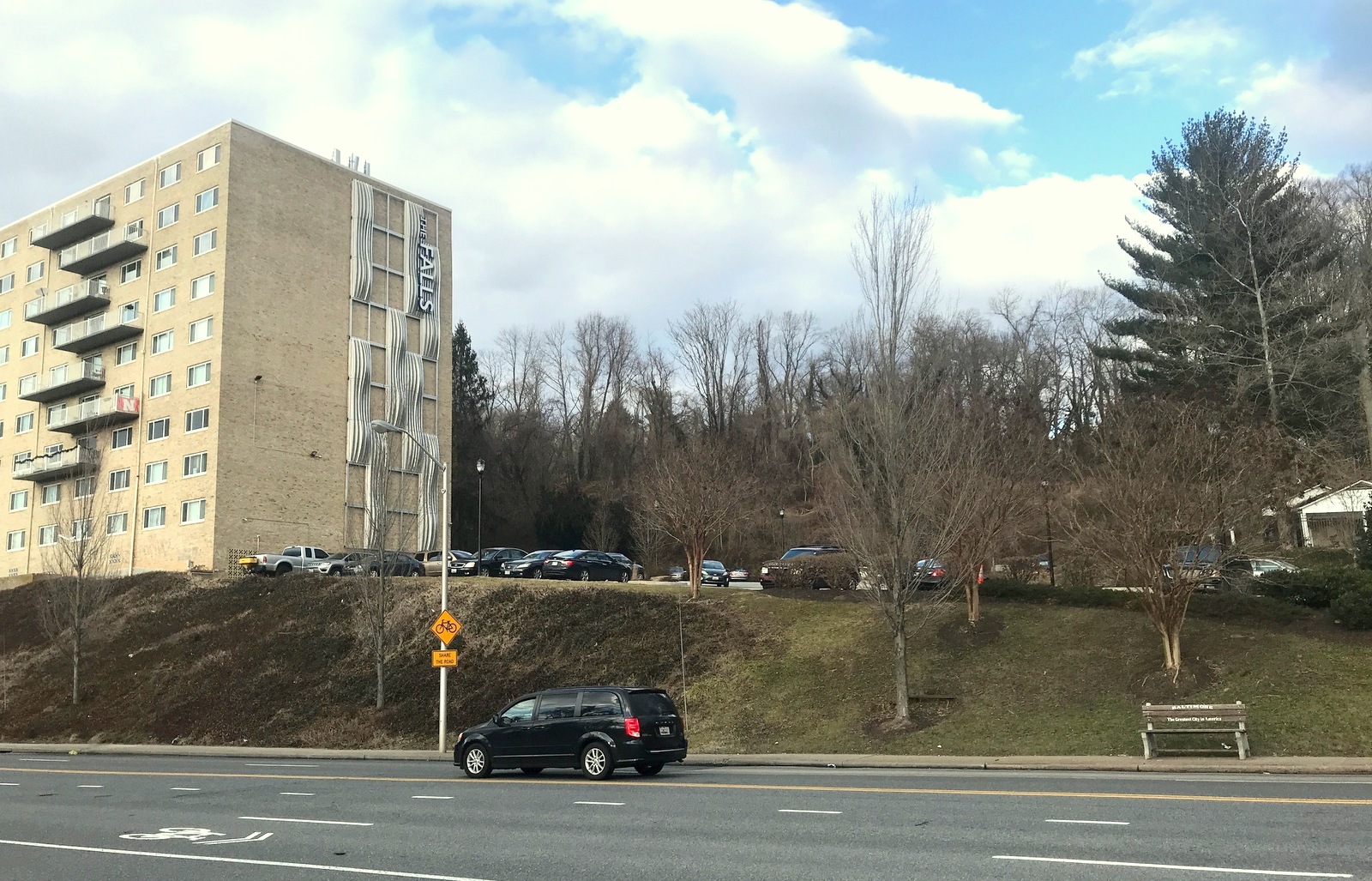 The Claiborne facility would be located in the woods above the “Falls at Roland Park” apartment building, which was recently sold by Blue Ocean. In the foreground is Falls Road just north of Northern Parkway. (Mark Reutter)

Claiborne principals said they want to decide by March 20 whether to move ahead with the project because after that date they won’t be able to get their deposit back.

If they proceed, they would aim to start construction early next year and open in the second quarter of 2023.

Company representatives said they wanted to meet with nearby residents in part to determine if they can gain their support for the project because they’ll need city zoning board approval in order to begin construction.

“I don’t like to use the word high-end, but it’s very high-end, very market sensitive. Nothing truly affordable about this”  – architect Marc Tolson.

The project would need a variance because assisted living is a conditional use under the current zoning for the property.

It also would need a height variance because the current height limit is 35 feet, and Claiborne’s proposed building would be about 43 feet from ground to roof.

Claiborne also used the meeting to start spreading the word about the project to potential residents. For Claiborne, active mostly in the southeastern United States, the project would be its first in Baltimore.

Cliff Bates, introduced as president of development, said the company chose to expand in the Baltimore-Washington area because it’s a strong market with high demand for the type of housing it builds.

“At the end of the day, the D.C.-Baltimore market was far and away the top area in the United States based on the metrics we were looking at,” Bates said.

In Baltimore, and in Roland Park specifically, “there is a huge demand for [assisted living]. The population is there.”

Marc Tolson, the project architect, said there is no question that it will be an upscale project. “I don’t like to use the word high-end, but it’s very high-end, very market sensitive. Nothing truly affordable about this.”

The steep hillside presents construction challenges, Tolson said, but it also provides a rare setting that’s in a city, yet surrounded by nature.

Weighing the Pros and Cons

There were a lot of questions and comments about the aesthetics of the proposed building, the project’s height and visibility from neighboring properties, the potential impact on traffic along Falls Road and Northern Parkway, how people would get in and out of the site, and the number of trees that would be cut down.

If Claiborne bows out, would Blue Ocean try again to build the six-story apartment project it proposed?

One overarching theme was what might happen to the property if Claiborne doesn’t move ahead.

From the comments, it was clear that there is a certain contingent that would prefer to see nothing built on the land. But with the Roland Park Community Foundation already raising funds to purchase 20 acres from the Baltimore Country Club to create a park a half mile south on Falls Road, is there enough interest in buying and preserving another 12 acres as open space?

If Claiborne bows out, would Blue Ocean try again to build the six-story apartment project it proposed, or would it try to find another buyer?

And how much would the City of Baltimore, generally eager for new development to increase the tax base, support area residents leery of over-development?

Before leaving the meeting, Claiborne officials said their project would have a low impact on the surrounding area because few residents would be driving. They also said Claiborne is an “owner operator” that retains and manages the projects it develops rather than selling them after construction.

Leaders of the five organizations said they’ll be communicating with residents to get reactions that can help board members decide whether to support Claiborne’s proposal.